Accessibility links
Carl Safina Takes Us InsideThe Cultures Of Animals In 'Becoming Wild' Combining the knowledge of a seasoned scientist and the skills of a good storyteller, the ecologist-author invites us to leave our cultural worlds and enter some animal ones to see just how they work.

In 'Becoming Wild,' Carl Safina Takes Us Inside The Cultures Of Animals

In 'Becoming Wild,' Carl Safina Takes Us Inside The Cultures Of Animals 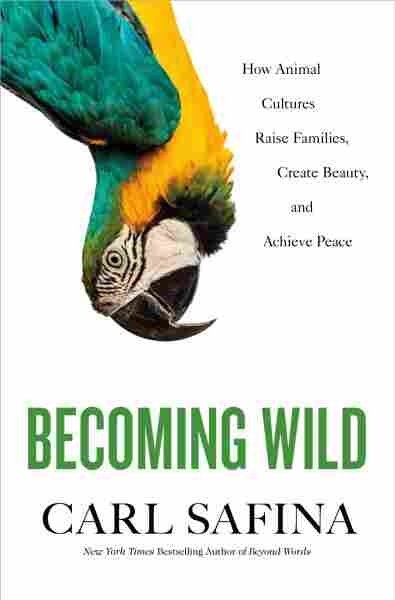 Animals think, feel and learn from each other in complex ways that finally are coming to be recognized.

In Becoming Wild: How Animal Cultures Raise Families, Create Beauty, and Achieve Peace, ecologist and veteran author Carl Safina writes: "It's as if we are just waking up from a long journey through space and having a look around an interesting new planet."

Becoming Wild is Safina's seventh book for adults, and it extends this new awareness of animal intelligence and emotion to questions of animal culture. "Culture is information and behavior that flows socially and can be learned, retained, and shared," Safina says. Joining field researchers as they observe sperm whales in the Caribbean, scarlet macaws in Amazonian Peru, and chimpanzees in Uganda's Budongo Forest, Safina explains how we know that many animals make use of that social flow, instead of only instinct or gene encodings. Combining the knowledge of a seasoned scientist with the skills of a good storyteller, Safina invites us to leave our cultural worlds and enter animals' ones to see just how they work.

"How does a whale find meaning in life?" With that pretty cool question, Safina begins with the sperm whales who live near Dominica in the Caribbean Sea, studied by Shane Gero for decades. It turns out that these whales ("the archetypal whale of human imagination," as in Herman Melville's Moby Dick) find meaning in family and group identity. Unlike humpback or blue whales, they live in stable groups where individuals stay together for decades. Adults hunt for squid in dark sea depths where youngsters cannot yet go; when mothers dive deep, aunts and grandmothers babysit.

Families join together in clans, where most whales are unknown to each other. Here is a truly astonishing discovery in the annals of animal behavior: "Only in sperm whales and humans do group identities extend so far beyond kin." Within a clan, everyone emits identifying vocalizations called codas; Safina likens them to Morse Code bursts that come in rhythmic patterns. In the Caribbean, where two clans of sperm whales exist (in the Pacific, there are five), the most commonly used coda identifies clan and the second most commonly used identifies an individual.

This social system is ripe for culture and, indeed, sperm whales in each clan swim, hunt for food, and socialize in different ways than happens elsewhere — and not for reasons of the environment but just because that's the way things are done clan-wide. Sometimes, humans can even observe a new cultural practice as it just catches on: Some sperm whales recently began to take hooked fish off fishing lines with dangling baited hooks. Other cetaceans are cultural too. One type of orca specializes in hunting for penguins, another only certain seals, another certain salmon, all because of learned social preference rather than food availabilities.

Safina is especially fascinated by the birds' outrageous beauty, and in this chapter he grapples with a fresh curiosity. Do birds themselves appreciate beauty, whether of color or of their own joyful songs? Female birds are the ones who choose among brightly colored mates, so in a sense do females create beauty? Could female preferences even work to create new species, given that social choices (and not just classic physical separation of populations) may push groups in different directions over time? Safina concludes that beauty is an evolutionary force. Here the scientist collides with the poet: "The world appears beautiful so that the living may love being alive in it."

Reading the final section on chimpanzees, whose group-to-group cultural variation in tool using and grooming is well-known, I slipped out of my role of entranced reader to think skeptically. Following on from the themes of family for whales and beauty for birds, Safina hones in on chimpanzees' violence. He notes manifestations of group identity in the Waibira chimpanzee community in Uganda's Budongo Forest, but sees too brutal aggression even within the group. Chimpanzees, he writes, are "their own worst enemies." At one point Safina goes so far as to note the "tedious ridiculousness" of chimpanzee male dominance behavior, concluding that males' intense interest in high rank "wastes the potential for better-quality time."

Safina asserts that only chimpanzees and humans deal with the fact that familiar males may be dangerous within a community. Notable, yes, but I wanted to burst with exasperation over Safina's moral judging of chimpanzees. Slowly though, I came to see that once again — as in the macaw section — Safina offers a rare gift, an opportunity to look over his shoulder as he experiences a shifting understanding. Day after day as he treks through the forest along with primate-gesture researcher Cat Hoibater, he leaves behind his initial "skewed" impressions. Together the pair witnesses a territorial incursion by other chimpanzees into the Waibira community's land that's as thrilling to read as any dramatic scene in a novel. But as time goes by, Safina sees that a huge part of chimpanzee life is learning how to make peace through forgiveness and reconciliation, in ways conducive to life right as it's lived right there and then, in that place. That's culture too.

As in his previous book Beyond Words: What Animals Think and Feel, Safina calls on his readers to reverse the trend of growing harm toward the natural world. As we gaze around this "interesting new planet" full of complex animals, this beautiful phrase from Becoming Wild deserves to be remembered: "The animals just need room to live and to be left in peace to make their own choices."

Barbara J. King is an anthropologist emerita at William & Mary. You can watch her TED talk on animal love and grief.