Accessibility links
San Francisco Lawmakers Order Mayor To Lease Hotel Rooms For Homeless The San Francisco Board of Supervisors passed an ordinance giving the mayor 12 days to secure thousands of rooms to house and protect the city's homeless population during the COVID-19 crisis. 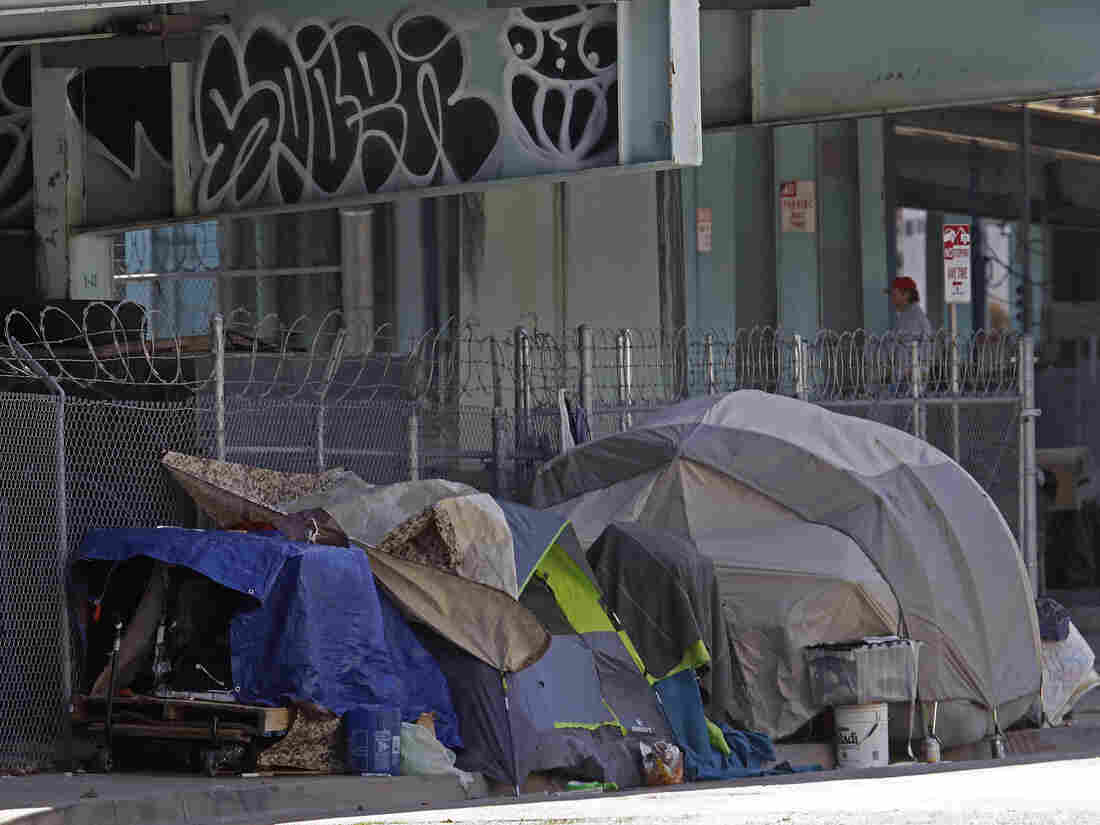 A homeless encampment seen on Monday in San Francisco. City lawmakers are demanding that the mayor step up efforts to house the city's homeless population to protect them from COVID-19. Ben Margot/AP hide caption 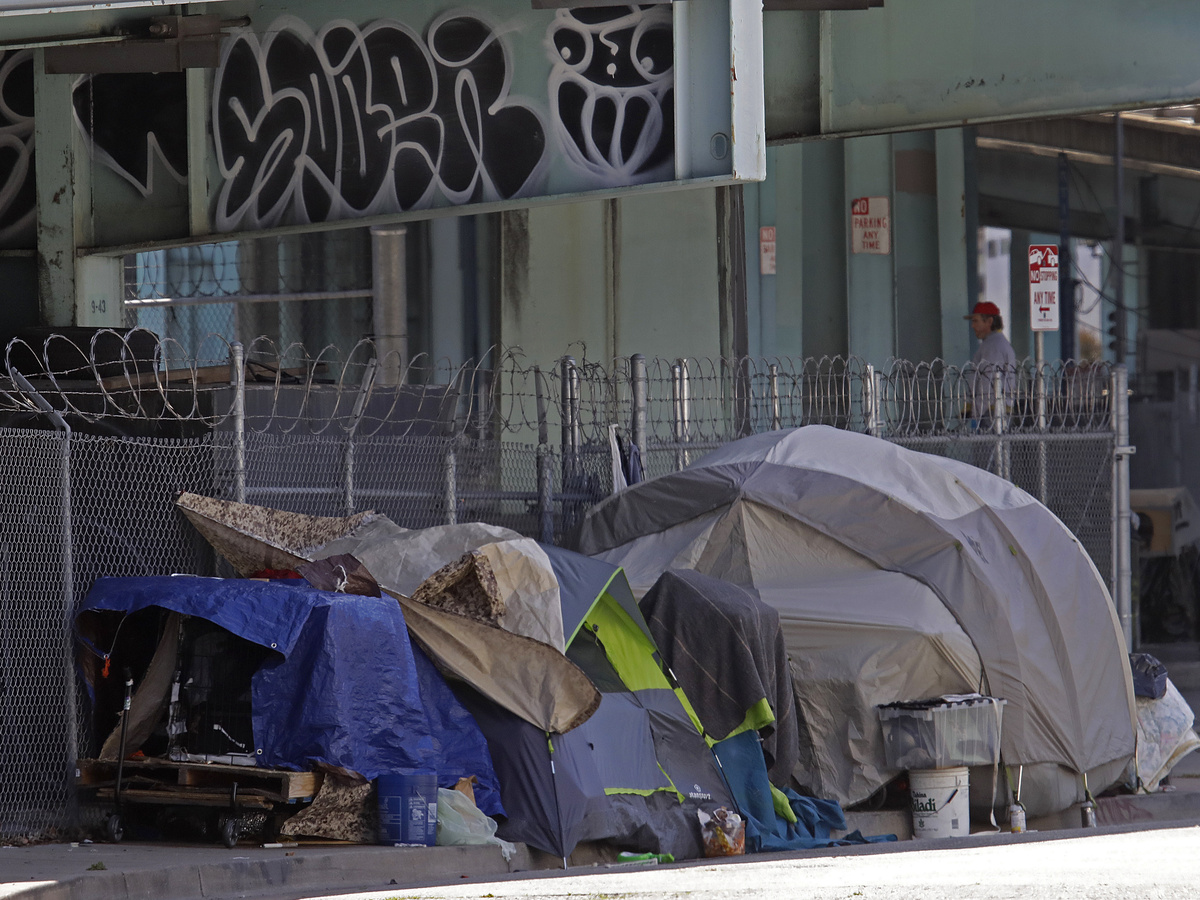 A homeless encampment seen on Monday in San Francisco. City lawmakers are demanding that the mayor step up efforts to house the city's homeless population to protect them from COVID-19.

Local lawmakers in San Francisco have given the mayor 12 days to secure 7,000 hotel rooms to house the city's homeless population during the coronavirus emergency, plus another 1,250 rooms for frontline workers.

The emergency ordinance passed by the San Francisco Board of Supervisors requires Mayor London Breed to secure the rooms by April 26 and asks her to use emergency powers to commandeer the rooms if she is unable to reach deals with hotel owners.

The vote, taken via videoconference, was a rebuke to what has until now been the mayor's more moderate strategy to place only the city's most vulnerable homeless people in hotel rooms. The legislation highlights the ongoing challenges that San Francisco and other cities face in managing large homeless populations, whose susceptibility to COVID-19 threatens broader efforts to contain the spread of the virus.

As of Tuesday, San Francisco had leased about 2,000 hotel rooms but filled less than half of them. It was prioritizing rooms for homeless people older than 60 or those with underlying health conditions that put them at greater risk of death should they contract COVID-19.

Breed has resisted calls for a wider policy of providing hotel rooms to all or most of the estimated 8,000 people living on San Francisco's streets or in shelters, saying the logistics would be overwhelming.

But the unanimous vote requiring her to do so came just hours after city health officials released updated figures on a massive coronavirus cluster that infected a majority of the people staying at the city's largest homeless shelter, known as MSC South. More than 100 shelter guests and staff tested positive, and the city's public health director said "many of them have chronic conditions and are vulnerable to getting very sick or even dying."

The outbreak forced city officials to rush shelter residents to hotels where they could self-quarantine, and in the cases of those infected, recover under constant monitoring.

Several members of the Board of Supervisors said the city had failed to heed warnings that "congregate" shelters such as MSC-South were fertile ground for the spread of the virus.

"I am sorry," said Supervisor Dean Preston, addressing shelter residents directly, "that after weeks of warnings, only the confirmed outbreak in your shelters spurred action from all of us."

Advocates for the homeless had been calling on the city to empty its shelters in favor of hotel rooms for weeks.

But until Tuesday's vote, Breed and city health and homelessness officials had been adamant that trying to house all of San Francisco's unhoused people in hotels was impractical, and could be counterproductive.

"It's not as easy as everyone would like to think," Breed said during a media briefing on Monday. She said managing the roughly 750 homeless people the city had already placed in rooms was requiring hundreds of staff to conduct wellness checks and manage behavioral crises, as well as provide transportation and meals.

The mayors of other California cities have expressed similar concerns about the challenge of moving large numbers of homeless people into hotels, even as they've said doing so remains a goal. In Los Angeles, Mayor Eric Garcetti said his staff was working to secure more rooms. It had about 1,700 as of this week and was continuing to negotiate with hotel owners.

Though the economic shutdown has left most hotels empty, some owners have refused to offer their properties to house the homeless, leading some advocates to call on mayors to use emergency powers to seize the properties.

Before the outbreak at the homeless shelter, Breed had been widely praised for taking early action to shut down her city — a move seen as largely responsible for San Francisco's success in keeping its rates of coronavirus infection low. But the shelter outbreak has made clear that a poorly managed homeless population could wipe out the city's progress.

"We've done so well in San Francisco on flattening the curve, and there's a lot of concern about what this means if these huge outbreaks occur," said Chris Herring, an advocate for the homeless and doctoral candidate at the University of California, Berkeley. "I think what the city is going to soon realize is what the cost of inaction will be."