Accessibility links
A 'War' For Medical Supplies: States Say FEMA Wins By Poaching Orders The White House has told states to find scarce medical supplies on their own in the midst of the coronavirus pandemic. Now state and local officials accuse FEMA of poaching supplies they ordered. 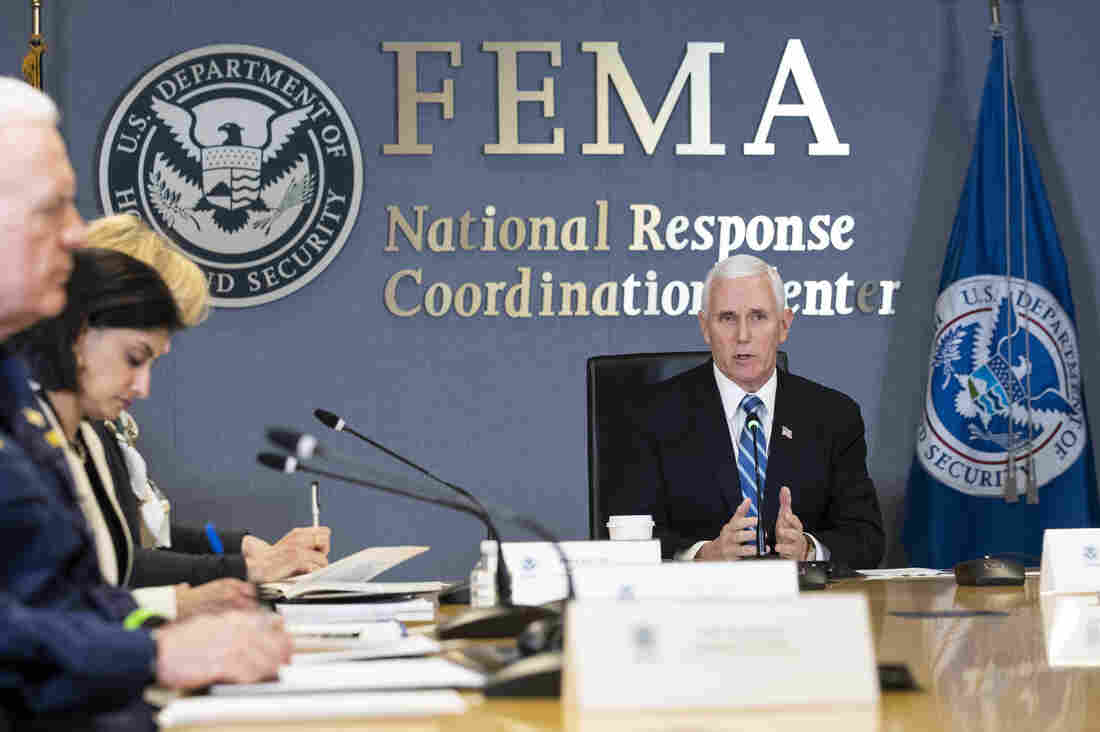 Vice President Mike Pence speaks as he leads a video teleconference with governors about the coronavirus, during a trip to FEMA on March 23. the Federal Emergency Management Agency is keeping a tight grip on critical medical supplies leaving the country – and coming in from overseas. This has frustrated states who are in need of masks, gowns, ventilators and other medical supplies. Alex Brandon/AP hide caption 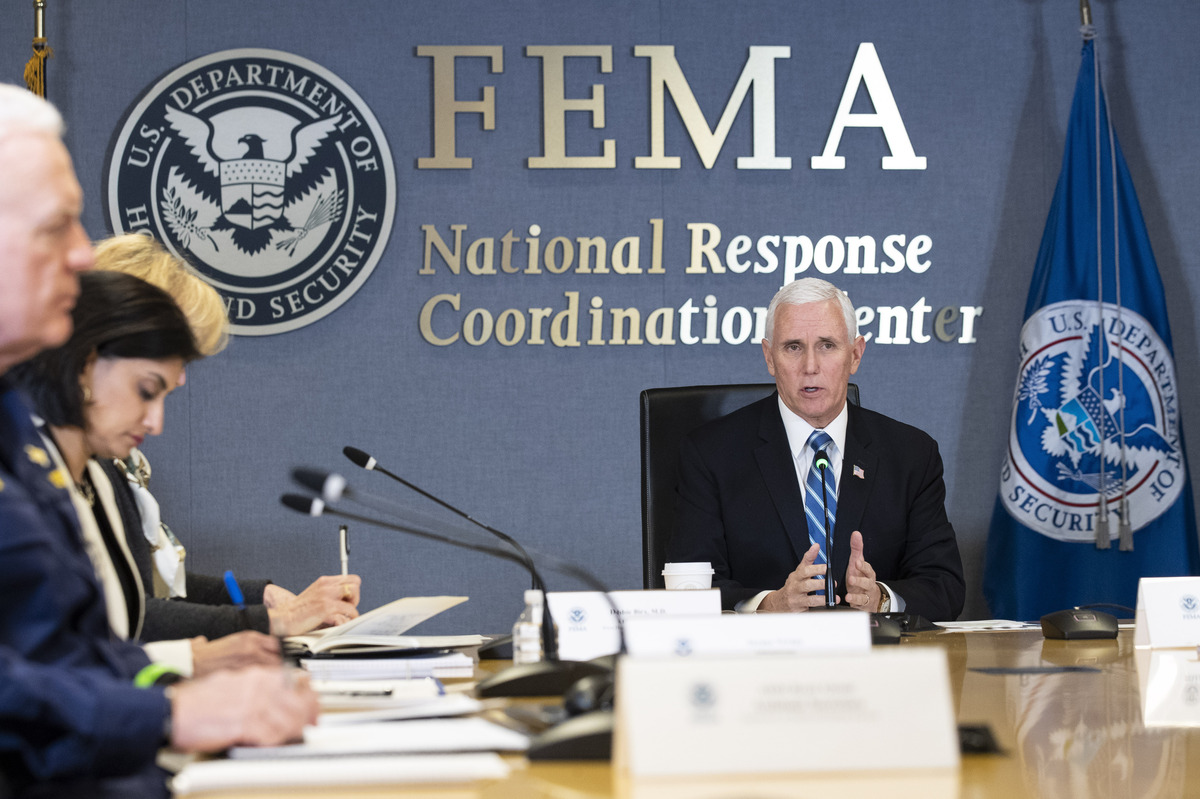 Vice President Mike Pence speaks as he leads a video teleconference with governors about the coronavirus, during a trip to FEMA on March 23. the Federal Emergency Management Agency is keeping a tight grip on critical medical supplies leaving the country – and coming in from overseas. This has frustrated states who are in need of masks, gowns, ventilators and other medical supplies.

As the number of coronavirus cases surged in Massachusetts, nurses at a hospital in Milford were desperate. They held up cardboard signs outside the hospital asking for donations of protective gear to wear while treating infected patients.

William Touhey Jr. thought he could help. Touhey is the fire chief and emergency management director in this small town outside of Boston. He did some legwork, and placed an order for 30,000 protective gowns from overseas.

"We were hearing good things that it was coming," Touhey said.

Then he got a phone call from the distributor last week.

"The order had been redirected, as they put it, from us to FEMA," Touhey said. "It's just the way times are right now, where everybody's fighting for a very limited supply of material."

State and local officials are caught up in a fierce global competition for masks, gowns, ventilators and other medical supplies. The White House has told them not to rely on the federal government because it's just a "backup," and to find their own gear.

At the same time, the Federal Emergency Management Agency is keeping a tight grip on critical medical supplies leaving the country – and coming in from overseas. This new system is disrupting an emergency supply chain that's been in place for decades.

And now governors, hospitals and local officials say the federal government is big-footing them by poaching the supplies they ordered.

"We had a good lead with a manufacturer on vents, and they got swept up by FEMA, so we're not getting them," Colorado Governor Jared Polis, a Democrat, in an interview with CNN this month.

Massachusetts Governor Charlie Baker, a Republican, says his state placed an order for millions of N-95 respirator masks — but never got them. "We had our 3 million masks that we had ordered ... confiscated in the port in New York," Baker said at a press conference this month.

After federal officials took those masks, Baker says Massachusetts scrambled to arrange a new shipment from China. But this time, state officials used a private plane that belongs to the New England Patriots.

So where did that first order of masks end up?

"I don't have any specific information on that," said Captain W. Russell Webster, who is in charge of FEMA's coronavirus response in New England, in an interview with member station WBUR.

While he can't explain what happened to those masks, Webster said that FEMA is distributing critical medical supplies from the national stockpile based on need.

"There is a priority of distribution based on health care workers and other first-line people involved in the COVID-19 response," Webster said.

We asked FEMA headquarters in Washington about that. In a written statement, a spokesman said FEMA does not seize or commandeer supplies that are already inside the United States. But the spokesman said that a supplier might decide to "cancel on a state contract in favor of [a] federal one."

"FEMA rightfully can say we didn't grab it from them. We just simply outbid them," said Juliette Kayyem, who teaches at the Harvard Kennedy School. "And that's clearly what's happening."

During the Obama administration, Kayyem was an assistant secretary at the Department of Homeland Security, where it was her job to coordinate the federal and local response to disasters. She's also baffled by the Trump administration's coronavirus response.

"This White House thinks everyone before them was stupid," Kayyem said.

Until now, Kayyem says, the playbook has been that federal, state and local officials should all be pulling in the same direction. But not anymore.

"For decades, we have worked disasters the same way. The locals execute, the states coordinate and the feds support," Kayyem said. "The federal government under Donald Trump has decided it is going to essentially go to war, create a parallel response apparatus, and it's winning. That's the problem."

The federal government is winning the chaotic competition for scarce protective equipment, Kayyem says, and in the process it's driving up the price of those supplies for everybody. And leaving states and hospitals even more desperate to find what they need.