Accessibility links
In 'What Is The Grass?,' A Story Of Hero Worship And Connection To Walt Whitman Acclaimed poet Mark Doty's memoir is not only an exaltation of America's troubadour, Walt Whitman, but also a celebration of gay manhood, queerness, and the power and elasticity of poetry.

A Story Of Hero Worship And Connection Runs Through 'What Is The Grass?'

A Story Of Hero Worship And Connection Runs Through 'What Is The Grass?' 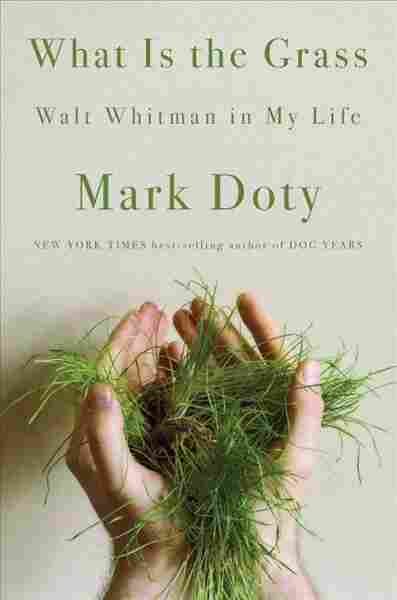 What Is the Grass

Walt Whitman in My Life

One long ago St. Patrick's Day, I wandered into an Irish book festival and picked up Colm Tóibín's essay collection, Love in a Dark Time: Gay Lives from Wilde to Almodóvar. The book made a deep impression about the dangers of gayness, loneliness that stems from the queer community's inability to hear or read its own stories, and literary codes that developed to signal queerness between the lines.

Now comes acclaimed poet and memoirist Mark Doty with What Is the Grass: Walt Whitman In My Life. Doty's memoir is not only an exaltation of America's troubadour, but also a celebration of gay manhood, queerness, and the power and elasticity of poetry. Doty features near the end of Colm Tóibín's book as a contemporary writer who's been permitted to explicitly mourn his lover, Wally, lost to AIDS. In his poem "Atlantis," Doty reflects:

"and I swear sometimes

when I put my head to his chest

I can hear the virus humming

Whitman has haunted Doty for decades, if haunted includes both hero worship and a sense of cosmic connection. Just as the great poems of Leaves of Grass "are spectacularly, uniquely on fire," so too is Doty's appraisal of Whitman:

"What daring, heat, and light Whitman's masterworks emit! ... They burn with evangelical urgency yet insist that no one request a spiritual teacher."

Doty braids his personal story with Whitman's. Whitman spent a destitute childhood as the son of a "drunken" mother. He shared a bed with his developmentally disabled brother. With a third-grade education, Whitman apprenticed to a New York printer at age 11.

Doty recalls his own boyhood; crediting his east Tennessee grandmother with making reading the "warm space where you are held." Doty's grandmother, a fire and brimstone Christian who found the "world a scrutable book of signs," laid a rich foundation for her grandson's writing life.

Doty centers his book around Whitman's iconic poetry collection, Leaves of Grass. Whitman anonymously self-published in 1855, revising and re-publishing the collection many times thereafter. "Grass" is printer-speak for dummy pages that test the set and centering of text on a page. This pun adds a wonderful wrinkle to Whitman's re-invention of poetry — his overflowing lines that lack rhyme and predictable meter, his use of white space where none had been before.

Doty identifies five sources for the "fountaining outpouring" of Whitman's Leaves of Grass: (1) A "radical experience of reality" that allowed Whitman to create a new concept of poetic self; (2) "uncharted desire" that drove Whitman's pioneering take on the body and queer sexuality; (3) the potency of the modern city; (4) language, particularly American speech; and (5) Whitman's acute awareness of death. Through fleshing out these themes, Doty serves as both instructor and celebrant.

Whitman's poetic self is capacious. Doty calls Leaves of Grass "a kind of collaboration with totality," referring to lines such as these from Whitman's "Song of Myself:"

For every atom belonging to me as good belongs to you."

Asked why Whitman chose to publish anonymously, Whitman's secretary replied, "It would have been like putting a name on the universe."

Doty devotes the largest number of pages to Whitman's "uncharted desire," how Whitman navigates and proclaims queer sexuality. Doty's fascination is as a poet, teacher, and as a man. He's at the top of his game in these chapters, proceeding line by line through "Song of Myself" and other poems, sharing their impact on his life. He sets Whitman's work in historical and literary context, weaving in the AIDS epidemic, Bram Stoker's Dracula, Oscar Wilde, and Whitman's American contemporaries — Emily Dickinson, Ralph Waldo Emerson, and Herman Melville among others.

It is here that Doty unspools his teenage marriage to an older woman, Ruth, with its strains and secrets, its sexual misalignment. "Hiding my sexuality meant hiding my body," he writes. Although he escaped the "horrors of aversion therapy, mental institutions, and prison," he "lived through a weird, nearly total silence...an entire culture conspired to say that something evident was simply not there. It makes you crazy." Doty examines his sexual life with rigor as well as a sense of wonder. He relishes the moment — insatiable — while simultaneously standing on the sidelines commentating.

In the third section of What is the Grass, Doty embarks on a sweeping tour of Whitman's New York, where Whitman "embodied modernity." From "Crossing Brooklyn Ferry:"

"Stand up, tall masts of Manahatta! Stand up, beautiful hills of

Whitman captured the language of the city and the frontier — hunters, trappers, woodsmen, miners, Native Americans. He was the joyous chronicler of America's vast natural assets yet lived through and documented the Civil War.

It must be a rare poet who ignores death. Whitman's awareness of death, however, was generative in Doty's view — "the necessary presence that mothers all songs."

Doty both embodies queer liberation and rejoices in it. But his relationship with Walt Whitman extends way beyond the political. Doty is on intimate terms with Whitman, who "infuses his descriptions of men's bodies with such palpable longing that anyone sympathetic to such desires cannot miss his intent."

What is the Grass provides a deeper understanding of both Mark Doty and Walt Whitman. As for America's troubadour, he will remain a poet for the ages, for "there is a momentum generated in the making of great poems that propels them beyond the reach of ordinary time."