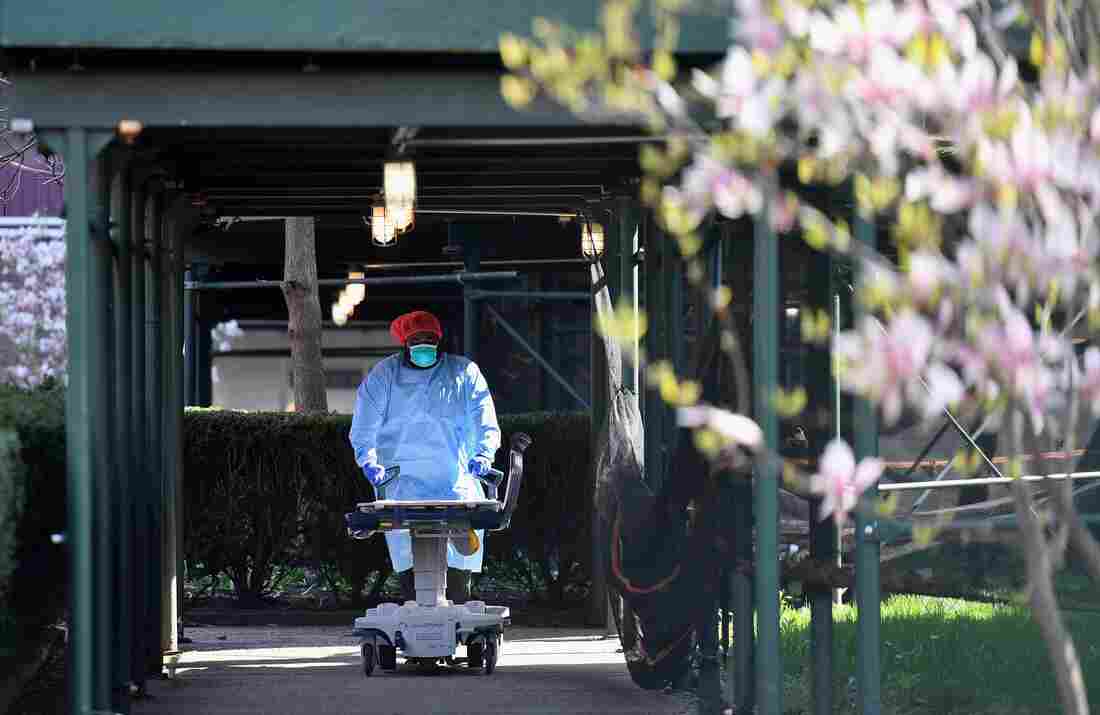 A medical staff member wearing personal protective equipment pushes an empty gurney at Kingsbrook Jewish Medical Center in Brooklyn on April 8. Nurses who gathered in protest outside Kingsbrook earlier this week said a shortage of protective gear at their hospital is in part to blame for the deaths there. Angela Weiss/AFP via Getty Images hide caption 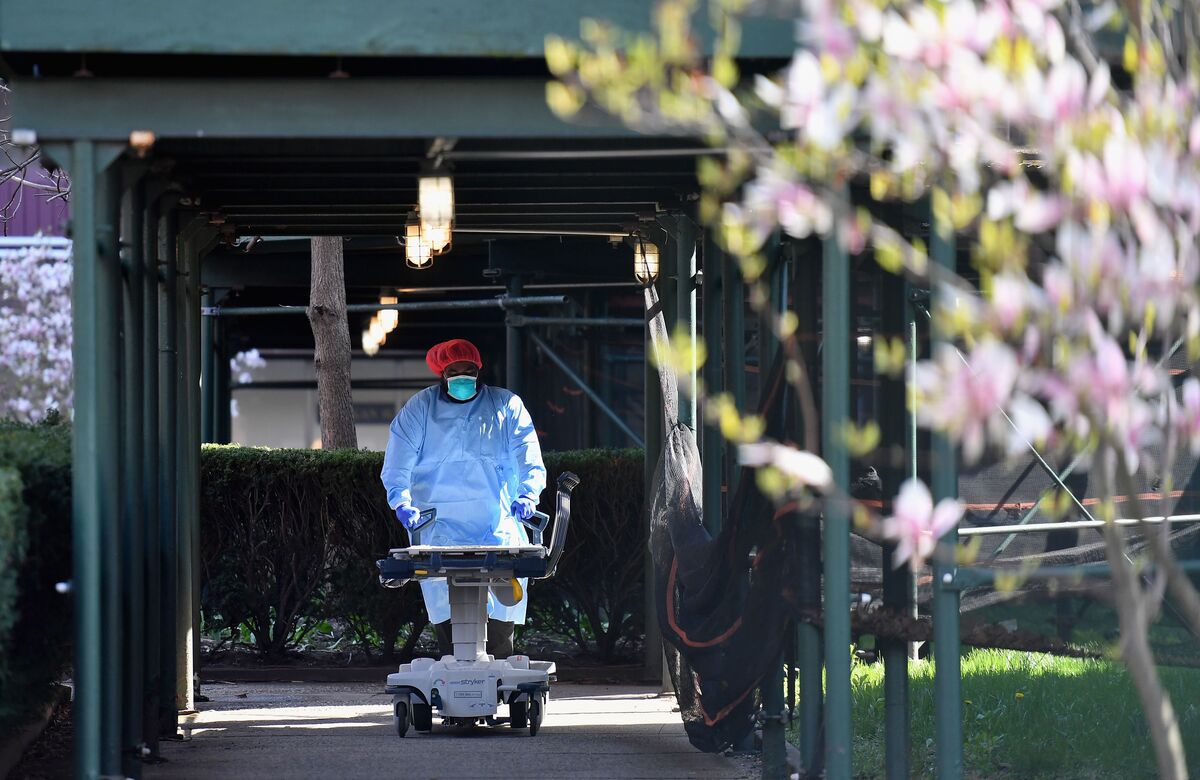 A medical staff member wearing personal protective equipment pushes an empty gurney at Kingsbrook Jewish Medical Center in Brooklyn on April 8. Nurses who gathered in protest outside Kingsbrook earlier this week said a shortage of protective gear at their hospital is in part to blame for the deaths there.

Nurses at Kingsbrook Jewish Medical Center in Brooklyn are demanding more protective equipment for themselves and their colleagues amid what they say is a string of employee deaths there.

"They have to do better, in order to save lives," said Ada Brown, a certified nurse's assistant who has worked at the 300-bed hospital in East Flatbush for five years. "The nurses are dying out. The CNAs, dying out. Everybody's dying out."

While the hospital did not respond to a request for information about employee deaths, the nurses said they have been collecting the names of their dead co-workers by word of mouth. They said at least five colleagues have died: a young surgeon, a nurse's assistant, a clerk, a security guard, someone who worked in the supply room. Several more workers are hospitalized, they said.

Kingsbrook is a private hospital that serves the area's low-income residents, including many who are black and of Caribbean descent. The hospital's management did not return repeated requests for comment.

There are no official statistics on how many health care workers have gotten sick or died from COVID-19 across the region. While some city agencies have released numbers for their employees, the city's hospital system has not. The state health department, which oversees private hospitals like Kingsbrook, said it is not tracking deaths by occupation. The city reports 26 employee deaths at its public hospitals.

Several other private hospitals did not immediately respond to requests for numbers of employees who have died from COVID-19. But a spokesman for Northwell Health, which runs 23 hospitals across the region, said that organization has had five employees die from COVID-19 — the same number workers are reporting at Kingsbrook hospital alone.

The New York State Nurses Association has reported that a handful of its members have died from COVID-19 in recent weeks. But the group does not have an overall count of how many health care workers and hospital employees have died, officials said.

Nurses who gathered in protest outside Kingsbrook earlier this week said a shortage of protective gear at their hospital is in part to blame for the deaths there. They said they're given a disposable face shield and are told told to use it for a month. They get one gown per day, they said, even if it rips. Some nurses said they have used trash bags to cover holes in their gowns. One woman said she was wearing a rain slicker because she couldn't find a gown.

"The politicians keep on trying to say we're okay," Keefe said. "We're speaking for everyone to say, 'It's not better, it's still not okay.'"

Access to personal protective gear for health care workers is an ongoing issue nationwide. Even prestigious institutions like New York City's Mount Sinai Health System have faced shortages of protective gear, as hospitals all over the country and the globe compete for supplies.

While large hospital chains may have purchasing departments and high-powered contacts — at NewYork-Presbyterian, a trustee reportedly chartered a plane to China to find face masks — smaller community hospitals may only have one person to handle all purchasing, the nurses union said. Kingsbrook became part of the One Brooklyn Health system in 2017, as part of an effort to restructure and revive several financially struggling hospitals in the borough.

The New York State Nurses Association has been flagging hospitals across the city with equipment shortages when it hears of them, with pop-up rallies at Wyckoff Heights Medical Center, Lincoln hospital and Jacobi Medical Center in recent days.

Other health officials have confidence in the system. "I believe that the protective gear is going to be in sufficient supply," said Kenneth Raske, president and CEO of the Greater New York Hospital Association, who is helping coordinate New York's response to the outbreak.

He pointed to a recent change in policy that allows health care workers to request N95 masks. "If a physician or nurse or respiratory therapist or any caregiver on the front line who's providing care to COVID-positive patients ... if they want a new N95, they will get it."

But the nurses gathered outside Kingsbrook this week were worried about more than just N95 masks. The chanting crowd quieted as Arlene Meertens, 52, a patient care technician, spoke up. Her voice quivered with fear and anger, as she described the terror in her children's eyes every time she leaves for work, and how they check on her during the night to make sure she's still breathing.

"If we are continuously working without the proper gear that we need, we will all die. So who will take care of the patients?" Meertens asked. "Protect us. That's all we are asking. Give us what we need so we can survive."