Accessibility links
StoryCorps: From Childhood Friends To The Front Lines Of A Pandemic Sam Dow and Josh Belser are working in different cities amid the coronavirus pandemic. "I'm not at all surprised that we both ended up working in health care," Belser said in a StoryCorps interview. 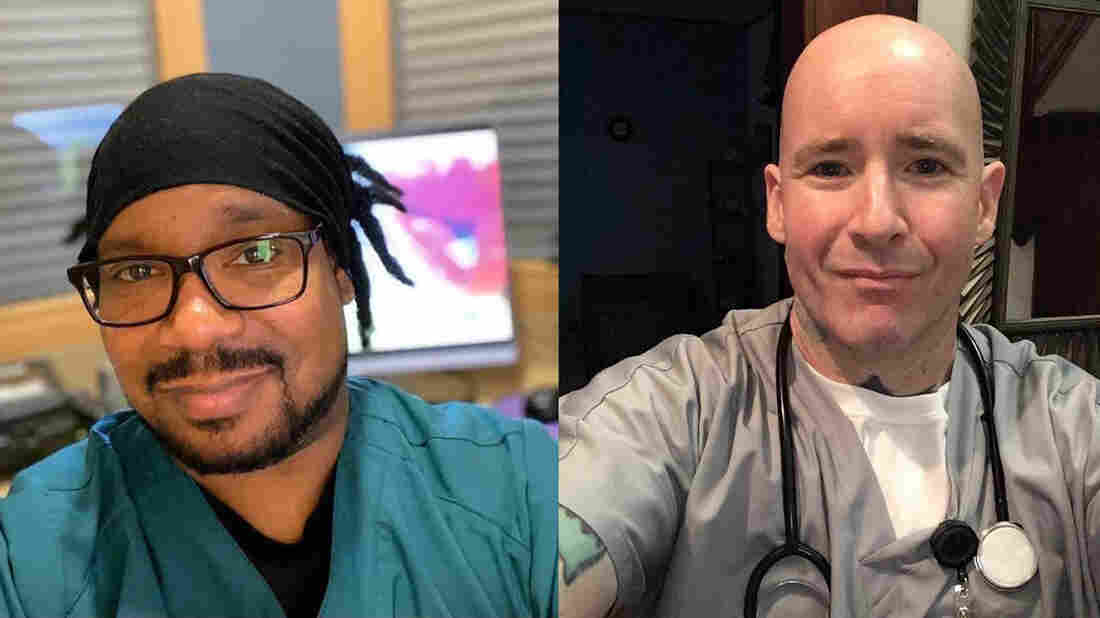 Friends for 30 years, Sam Dow (left) in Ann Arbor, Mich., and Josh Belser in Syracuse, N.Y., are both working on the front lines of the coronavirus pandemic. Courtesy of Josh Belser hide caption 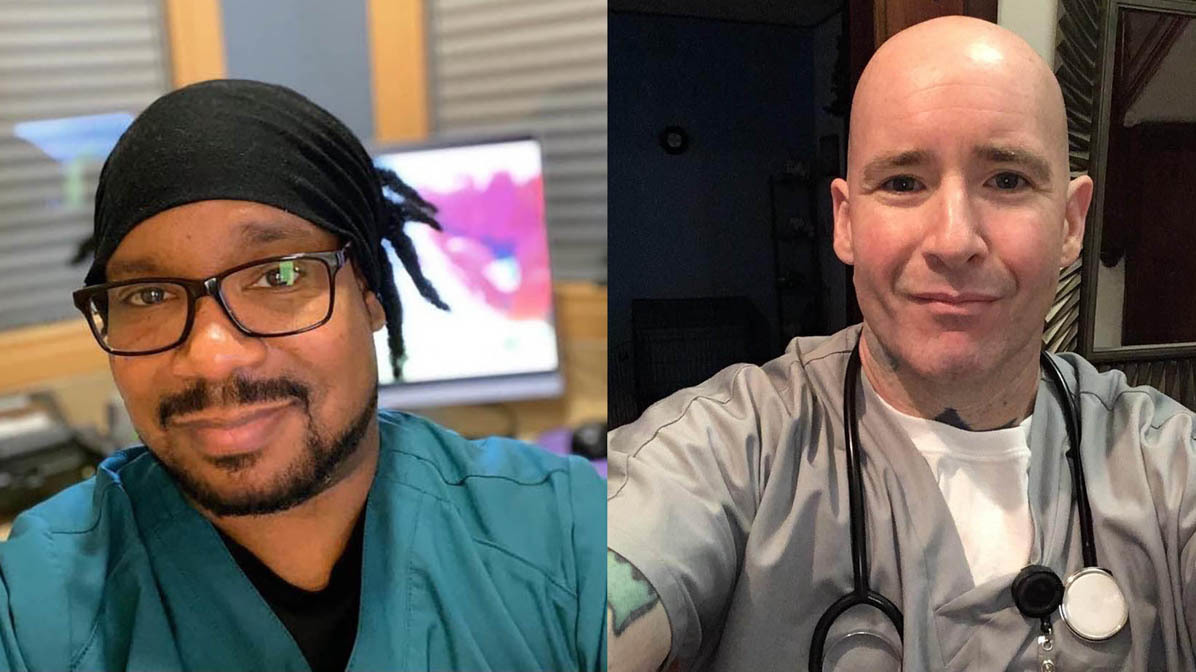 Friends for 30 years, Sam Dow (left) in Ann Arbor, Mich., and Josh Belser in Syracuse, N.Y., are both working on the front lines of the coronavirus pandemic.

Friends Josh Belser and Sam Dow are more than 400 miles apart from each other, but, as health care workers, they're united in the fight against the coronavirus pandemic.

Belser, a nurse in Syracuse, N.Y., and Dow, a health care technician in Ann Arbor, Mich., grew up together in Florida.

Both are self-isolating from loved ones and regularly speak with each other, but the childhood friends connected remotely this week for a special StoryCorps conversation.

"Looking back on it now, I'm not at all surprised that we both ended up working in health care," Belser said, recalling a memory that, to him, foreshadowed a life dedicated to taking care of others.

In the late '80s when the two were about 10 years old, Belser said, the Ku Klux Klan distributed recruitment propaganda flyers around their neighborhood in Brandon, Fla.

That day, he said, his friend, Dow, a black kid in a largely white neighborhood, knocked on his door with the idea "that we go around on bike and get all those flyers so that when people woke up in the morning, they didn't have to wake up to that."

"You were somebody who did think about other people's feelings," Belser told Dow.

Dow said they're both that way.

"You were always the guy that sticks up for the underdog, you know," he told Belser.

For Veteran, Hospice Care Work Connects Him To Family

Now, working on the front lines of the coronavirus outbreak, they're both channeling their care for others in ways they couldn't have imagined. Belser has been a nurse for a decade, and Dow has worked in the industry for eight years.

Dow says the floor he works on was one of the earliest at the Michigan hospital to be converted to handle COVID-19 patients only.

"Our jobs had to change like seemingly overnight," he said. "I mean, there was no dress rehearsal because the numbers just started to go up — and then it was show time."

He said three of his patients died within one 12-hour shift last week.

"The bravest of us right now is absolutely terrified," Belser said.

Dow says that one of the hardest things is coming home and just being alone. He decided to move out of where he'd been living with his girlfriend to limit her exposure to the virus. He also hasn't seen his stepdaughter in three weeks.

Belser, meanwhile, is living with his 13-year-old daughter and is self-isolating from the rest of his family. He hasn't seen the younger of his two daughters for more than a month.

"I wish I could be there with you, brother, I do," Belser told Dow.

"That means a lot from someone who is also in it," Dow said. "There's definitely, like, a club that nobody wants to be in — but we're in it."

Belser is thankful for Dow's 30 years of friendship.

"God willing there'll be 30-something more," Belser said. "But if something were to happen to me, I think I'd like to be remembered as that guy who would give all for his friends and the people that he cared about — and maybe even a complete stranger, too."

As for Dow, he hopes he can make a positive difference in people's lives.

"I guess that's the best any of us can really hope for," he said.

Recently, StoryCorps developed a new way to bring people together that makes it possible to record interviews remotely. Go to storycorpsconnect.org to try it out.