Accessibility links
Self-Employed And Gig Workers Face Long Waits For Coronavirus Relief Checks A slew of factors have led to painful lags in getting financial aid into the hands of record numbers of unemployed workers. 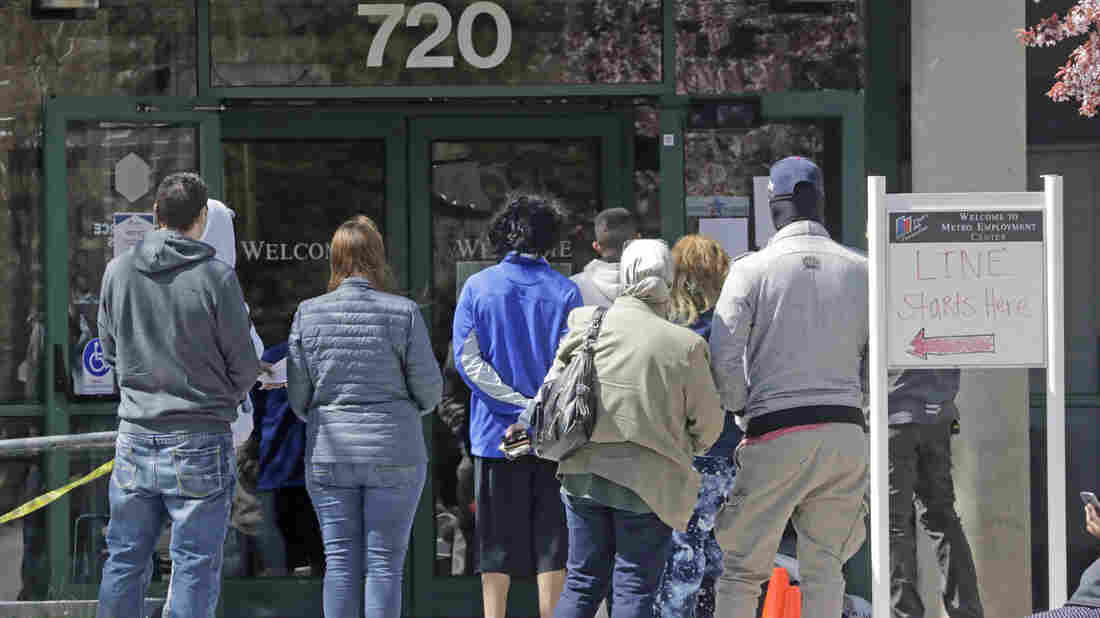 People line up outside the Utah Department of Workforce Services in Salt Lake City on Monday. Rick Bowmer/AP hide caption 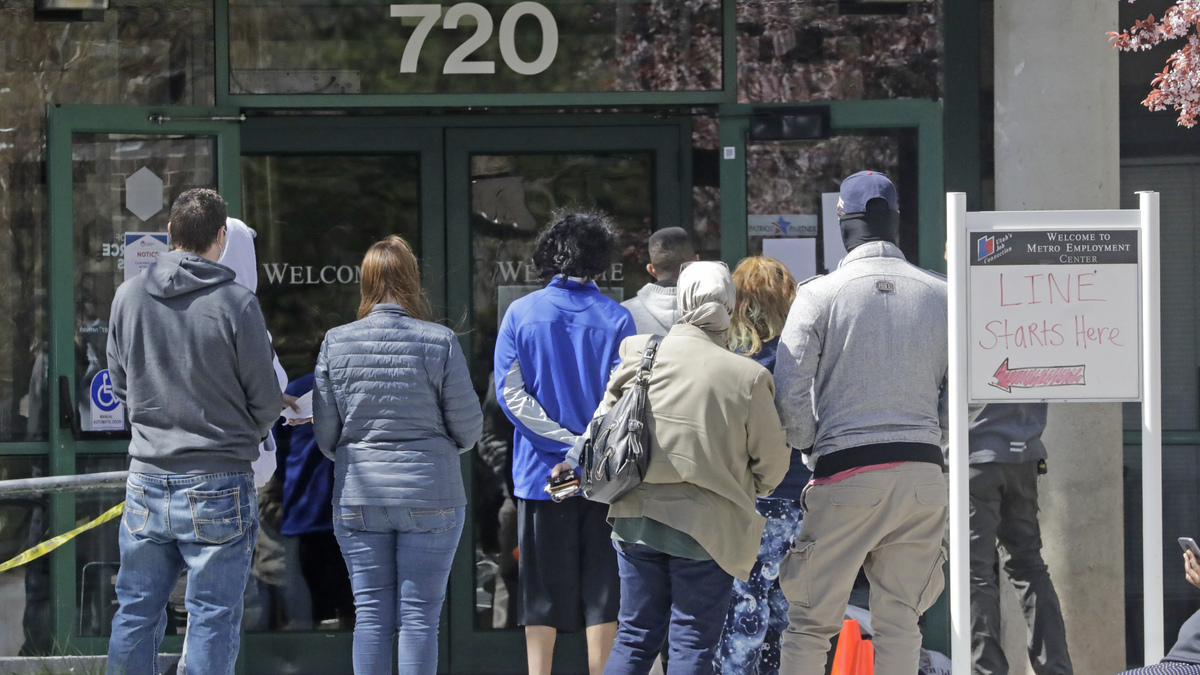 People line up outside the Utah Department of Workforce Services in Salt Lake City on Monday.

Crashing servers, outmoded software and overloaded call centers are some of the obstacles standing between millions of unemployed workers and the financial lifeline the government has promised under the $2 trillion relief package approved late last month.

With every passing week the problem is exacerbated by new waves of jobless or laid-off workers whose paychecks have vanished since the coronavirus pandemic crippled the U.S. economy.

But the delays may be even longer for the self-employed, independent contractors and gig-economy workers who are not normally eligible for unemployment benefits, but are covered under two separate provisions in the Coronavirus Aid, Relief, and Economic Security Act, or CARES Act.

New figures released by the Department of Labor show 22 million Americans have filed unemployment claims since mid-March. The staggering surge reflects how jobs, created during a decade-long economic expansion, have been wiped out.

Meanwhile, state agencies say a large part of what is causing the technology problems leading to delays is the avalanche of newly eligible applicants that have overwhelmed existing systems. The crush of calls and online applications have proved to be too much for understaffed call centers and outdated benefit programs running on old software.

Among those caught in the fiscal melee is Ted, a self-employed state and local government consultant who became Internet-famous last week for creating a diagram of his Sisyphean journey to file a claim.

Ted, who asked that his last name be withheld to protect future job prospects, said that over the span of six days he made 991 calls to the New York State Department of Labor before finally connecting with a human being to complete an online application.

According to the chart that he made by downloading his cellphone call logs into an app, 845 of those calls resulted in a busy signal.

On 147 of the calls, he made it through to a message saying the line was too busy, before it severed the connection. In 68 attempts, Ted managed to make it into the automated system, but was disconnected as he was transferred to an agent.

"So my last call, the 992nd call, was when I typed in my Social Security number, dialed in my pin number and instead of saying, 'We're sorry. We're too busy. Call back again,' it actually said, 'We're transferring the call to a representative.' "

He was told the wait time was between six and eight minutes.

He waited an hour.

When Ted got through, he was told what he already knew: that he is eligible for $600 per week under one provision of the CARES Act and up to an additional $600 per week under the Act's Pandemic Unemployment Assistance (PUA) program for those who do not normally qualify for traditional unemployment insurance.

Unfortunately, neither Ted nor any of New York's other tens of thousands of self-employed or part-time workers can apply for the PUA program at this time, because it has yet to launch.

Ted admits he doesn't know exactly what to do next. "Just wait, I guess, and keep checking the website," he said.

States struggle to meet the demand

New York Gov. Andrew Cuomo announced last week that 300 additional call center employees had been hired to help process applications. A few days later, the state's labor department changed its process so that calls to applicants who still needed to finalize applications would be initiated by staff.

But applicants have apparently been reluctant to answer calls from a strange phone number. On Monday, during his daily press conference, Cuomo urged people to pick up the phone.

"How long that takes will vary by state," Scalia said, adding "some states will take longer because they rely on computer equipment that is 40 years old and in need of significant IT support."

State officials nationwide say a primary factor behind the delay in rolling out PUA payments is that programs couldn't be finalized until states received guidance from the U.S. Department of Labor, which was not conveyed until April 5. That was almost a week after President Trump signed the stimulus bill into law.

Once those guidelines were issued, Su said, the state's Employment Development Department began working on creating a new PUA program.

"We expect to roll it out in three weeks," she said, explaining that it will likely take an additional three weeks for applicants to receive their first payment after submitting an application.

In a twist, Su noted that nearly all states appear to have been understaffed ahead of the unemployment crisis because agencies shrink when the economy is strong.

"At the time that COVID-19 hit it was one of those times," she said. "We had seen a decades-long, year-over-year growth in our economy, so it was a time of lower staff to begin with."

Over the last few weeks, California has scrambled to hire hundreds of new workers, bringing some out of retirement and others from a variety of departments to help process claims. Call center hours have been extended from eight to 14 hours a day. And on Easter weekend, when employees were given the chance to take time off, "500 of them showed up to work," Su said.

California deposits funds electronically onto a debit card. Su explained that back-payments will arrive in a single lump sum.

"I know that doesn't bring much relief to people who need money right now, but we're doing everything we can," she stated.

Su added that earlier this week California became one of the first states to start sending an additional $600 of weekly unemployment compensation approved by Congress under the CARES Act, separate from the PUA.

In Florida, the deluge of calls and influx of online applications have been so heavy that residents have been urged to abandon the Internet for now and return to the world of paper, envelopes, stamps and, if need be, face-to-face meetings. As the state upgrades its servers and adds staff, people have been told to submit forms by mail or visit a CareerSource location in person to get help.

But even then, the department said, it could potentially take longer to process the paper form than an online application.

Ohio's Department of Jobs and Family Services is "re-programming" a system that was used to issue stimulus checks in 2009 for the distribution of extra $600 weekly checks, Bret Crow, an agency spokesman, told NPR in an email.

"We are reusing functionality we used back then, so it will be sooner than the ones we have to create from scratch," Crow explained, but he did not offer a date when the state will start sending them out.

Independent contractors who file 1099s and other previously ineligible self-employed workers seeking aid through the PUA program will have to wait until mid-May, he estimated. That's because the system is still under development by an outside vendor.

"We decided to go that route to offer better customer service to the new group of folks," he said, clarifying that "it will be separate and apart from the traditional unemployment system."

He added: "As soon as that system is ready to accept new applications, we will inform folks how to apply."

Another layer of confusion in deciding who is entitled to what under which piece of the CARES Act is the ongoing legal battle over whether gig-economy workers, whose jobs depend on apps such as Uber and Lyft, are self-employed or regular employees. The classification is imperative in determining whether a person is eligible under the PUA program or under traditional unemployment insurance.

Some states, including California, New York and Illinois, have passed bills recognizing app-based workers as employees — a position those companies dispute and for which they've been accused of failing to share payroll information with state agencies, further stalling the calculation of weekly benefits.