Accessibility links
Voting Rights Lawsuits Multiply Amid Coronavirus Pandemic Both parties are turning to the courts to try to ensure that election rules don't disadvantage their side. The litigation campaign has taken on a new urgency amid the coronavirus pandemic. 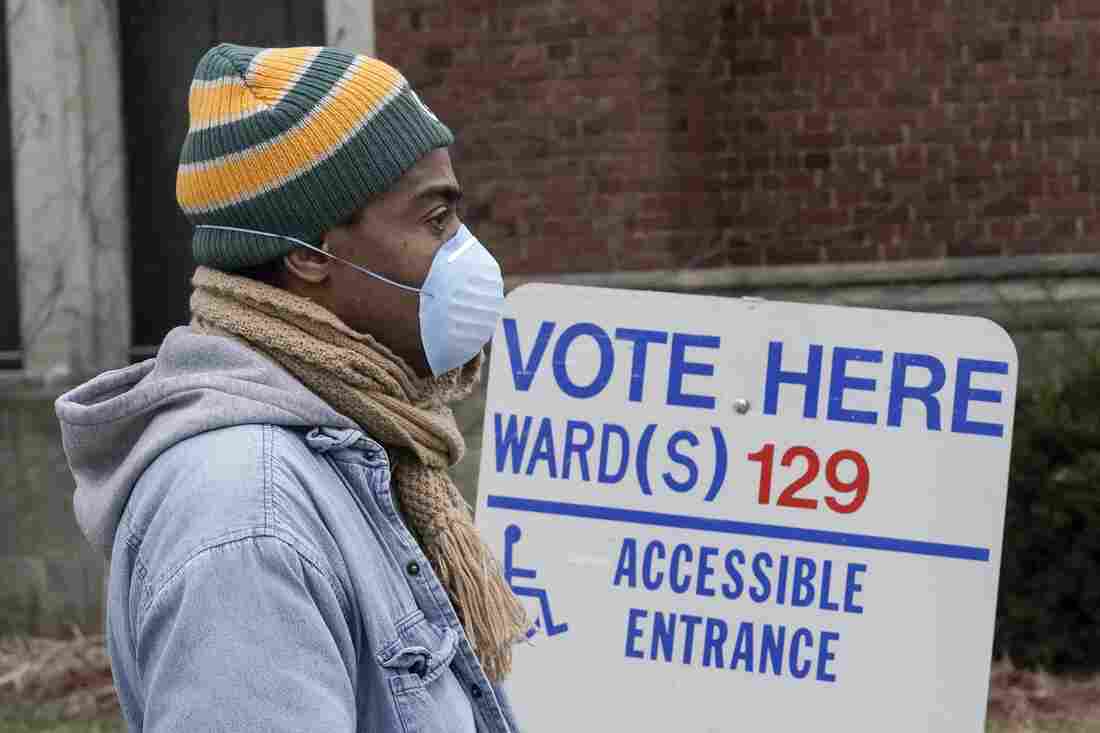 A voter in line in Milwaukee during this month's Wisconsin election. Voting took place after multiple lawsuits to change absentee ballot deadlines, a possible preview of legal battles to come in 2020. Morry Gash/AP hide caption A voter in line in Milwaukee during this month's Wisconsin election. Voting took place after multiple lawsuits to change absentee ballot deadlines, a possible preview of legal battles to come in 2020.

Election-year legal battles over voting procedures are nothing new. But their scope and intensity are growing this year amid deep partisan polarization and the logistical challenges presented by the coronavirus pandemic. The legal fights are expected to heat up in the coming weeks.

Exhibit A is a lawsuit filed by Democrats in Nevada on Thursday challenging the state's plans to conduct a mostly all-mail primary on June 2 and to drastically limit in-person polling sites. Democrats say the moves — including automatically sending ballots only to voters who have taken part in recent elections, but not all registered ones — are an infringement of voter rights.

Republicans counter that Democrats want to overturn rules intended to protect the integrity of the state's elections and would unnecessarily put voters' health at risk.

Both Democrats and Republicans are turning to the courts to try to ensure that rules governing this year's election don't disadvantage their side. The litigation campaign has taken on a new urgency with the pandemic and its impact on people's willingness and ability to go to the polls in person.

"I can assure you that we will not sit by and let Republican election officials, or the Republican Party, disenfranchise voters in a cynical effort to win elections at all costs," said Marc Elias, the lead attorney for the Democratic Party effort. "I expect several additional voting rights cases to be filed in the coming weeks and months, all aimed at protecting the right of voters to participate in elections and have their votes counted." 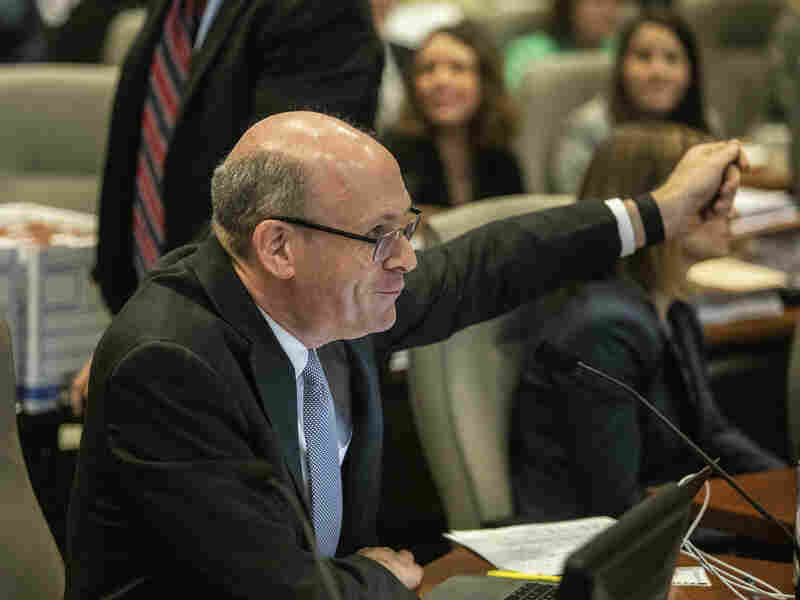 Attorney Marc Elias said, "I expect several additional voting rights cases to be filed in the coming weeks and months, all aimed at protecting the right of voters to participate in elections and have their votes counted." Travis Long/AP hide caption 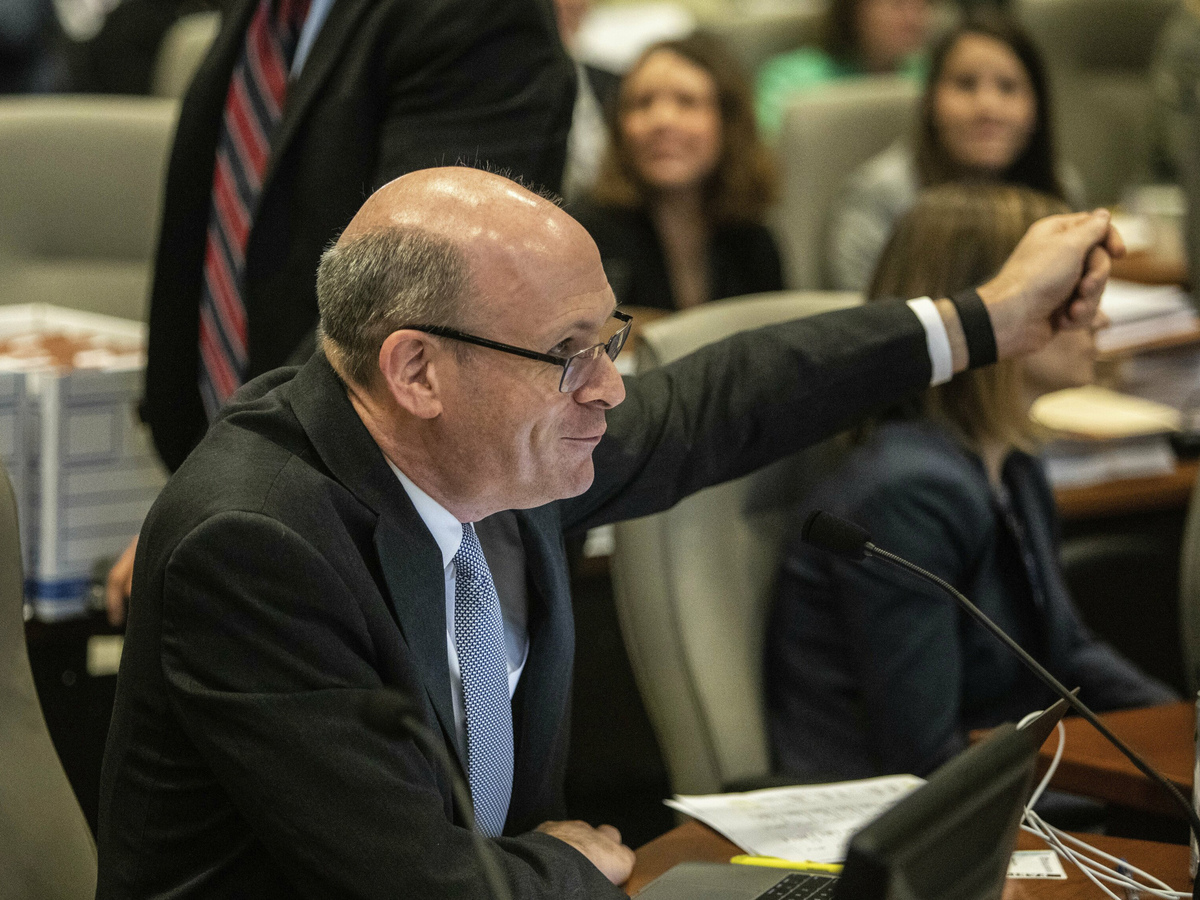 Attorney Marc Elias said, "I expect several additional voting rights cases to be filed in the coming weeks and months, all aimed at protecting the right of voters to participate in elections and have their votes counted."

Elias has already filed more than 20 lawsuits in 14 states challenging voting procedures. He expects that before the year is out, the number could easily double, with much of the focus on states Democrats are planning to heavily contest, such as Georgia, Florida, Wisconsin and Texas.

The Republicans are ramping up their legal effort as well. The Republican National Committee and President Trump's reelection campaign announced in February that they would spend at least $10 million in the coming year to defend the integrity of U.S. elections and to fight Democratic efforts to weaken existing voting rules.

RNC spokesperson Mike Reed noted that the effort was announced before the coronavirus pandemic disrupted the primaries and and that the party will likely spend much more.

"Look, the Democrats are clearly trying to go into all these states and get the laws changed and so we're going to have to defend those laws," Reed told NPR.

Republicans charge that Democrats are exploiting the current health crisis to secure a wish list of voting changes, including same-day voter registration and elimination of signature requirements intended to safeguard the vote-by-mail system.

A bitter court battle over Wisconsin's primary last week was a taste of what's to come. Republicans opposed a last-minute request by the Democratic governor to delay the primary and efforts to loosen restrictions on absentee voting. Wisconsin GOP leaders appealed a lower court decision to the U.S. Supreme Court, which ruled that the state could not count absentee ballots postmarked after Election Day. 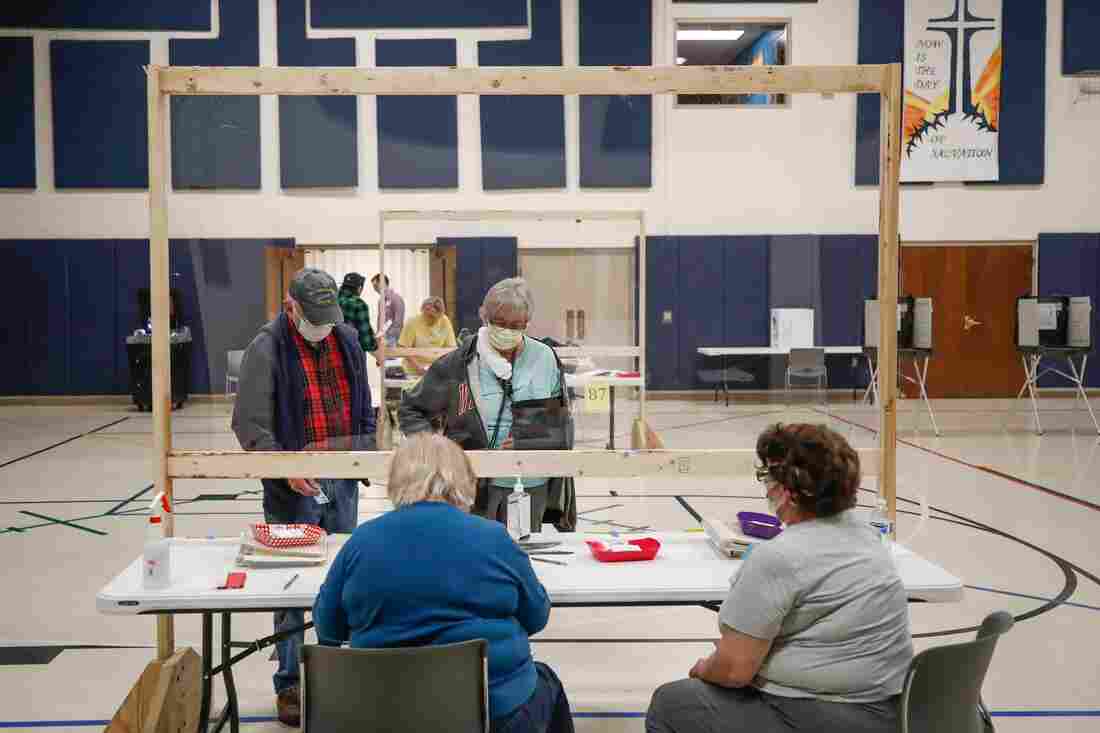 A couple checks in to cast their ballots earlier this month in Kenosha, Wis. Voters went to the polls despite the coronavirus pandemic after courts refused the governor's request to delay the election. Kamil Krzaczynski/AFP via Getty Images hide caption 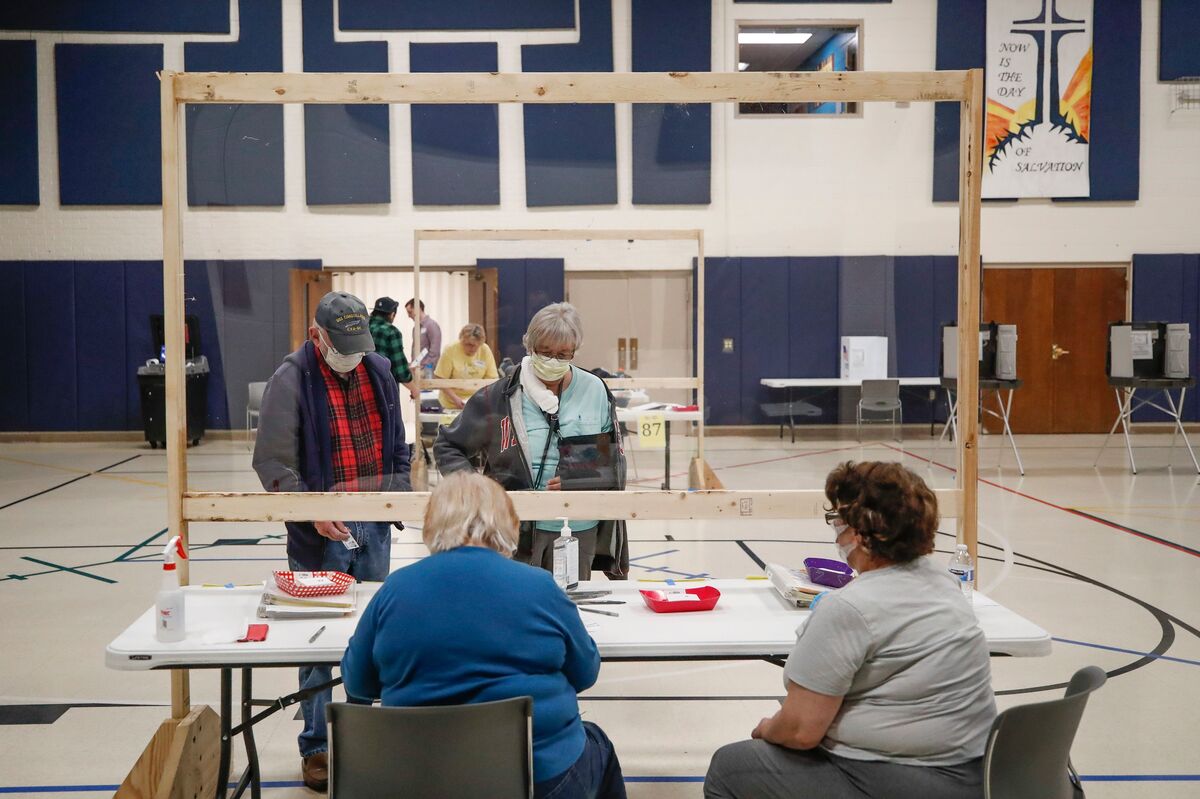 A couple checks in to cast their ballots earlier this month in Kenosha, Wis. Voters went to the polls despite the coronavirus pandemic after courts refused the governor's request to delay the election.

The resulting chaos, with voters showing up at the polls in protective gear and thousands of voters failing to receive their absentee ballots, was a sign of what might lie ahead in other states. Some Democrats said they came out to vote, despite the health risk, in defiance of what they saw as a GOP effort to suppress their vote.

Numerous other cases are already working their way through the courts. Just this week, the New Mexico Supreme Court ruled in favor of the state Republican Party and its opposition to a mostly all mail-in primary there. In Texas, a state district court judge agreed to a Democratic Party request to expand absentee voting in that state, a decision Republicans plan to appeal. Democrats in Arizona cited the Supreme Court's decision in the Wisconsin case to argue in court that their state should count mail-in ballots as long as they are postmarked by Election Day.

Both parties recognize that mail-in voting will be much more widely used this year because of the pandemic, despite opposition from Trump. He recently tweeted that Republicans should fight efforts to expand vote by mail, which he said has "tremendous potential" for fraud and helps Democrats, although neither assertion is backed up by the evidence.

Instead, the legal battles revolve around how, and how much, states change the rules in light of the pandemic. All states allow some mail-in, or absentee, voting but to varying degrees.

Some states have already loosened the rules, but Democrats want much more, including the elimination of excuses required for absentee voting in 17 states. Democrats also want prepaid postage for mail-in ballots and states to count ballots that are postmarked by Election Day, even if they don't arrive until a few days later. They would also like witness and other signature matching requirements eased and for third parties to be able to collect and turn in ballots for voters who might be unable to do so themselves.

Republicans oppose many of these changes and are expected to fight them vehemently in court. They're dead set against allowing others to collect — or what they call "harvest" — ballots, which they argue opens the way to voter fraud. Examples of such fraud are rare, although a Republican operative was charged with collecting and tampering with ballots in a 2018 congressional race in North Carolina.

The RNC also objects to states sending mail-in ballots to all voters, even those who don't request them, noting that many state voter rolls are filled with inaccuracies and that the ballots could get into the wrong hands.

"It's not about winning or losing. It's not about us getting an advantage or not. It's about protecting the integrity of the ballot," said Reed of the RNC.

Democrats scoff at that, noting that Trump told an interviewer on Fox News last month that "you'd never have a Republican elected in this country again" if he agreed to Democratic proposals to expand voting options.

Election experts say it's unclear how much each party has to gain from such rule changes. But Josh Douglas, a law professor at the University of Kentucky, said it could make a difference in a close election, which is why the parties are fighting so hard.

"I think everyone is seeing the courts as a key component of election campaign strategy," he said. "Every election cycle has proven to be the case, that some people, especially in close elections, can point to these election litigation battles as a component of an electoral win or loss."

The contested 2000 presidential election, where a Supreme Court decision ultimately made George W. Bush president, is the prime example. Douglas said lawsuits have become increasingly prevalent as state legislatures have imposed new restrictions on voters. His state — Kentucky — just enacted a law this week requiring voters to show a government-issued photo ID at the polls, a requirement Douglas fully expects to be challenged in court.

"And now you have a new suite of issues to worry about with the emergency situation that we find our country in," he said. "So I don't think 2020 is anything new with respect to election litigation. It's just more and more and newer issues as the country deals with trying to figure out how to vote during a pandemic."