Accessibility links
Trump Warns Of 'Consequences' If China Was 'Knowingly Responsible' For Outbreak The president has offered no evidence that the Chinese were responsible for the pandemic, and conceded, "If it was a mistake, a mistake is a mistake." 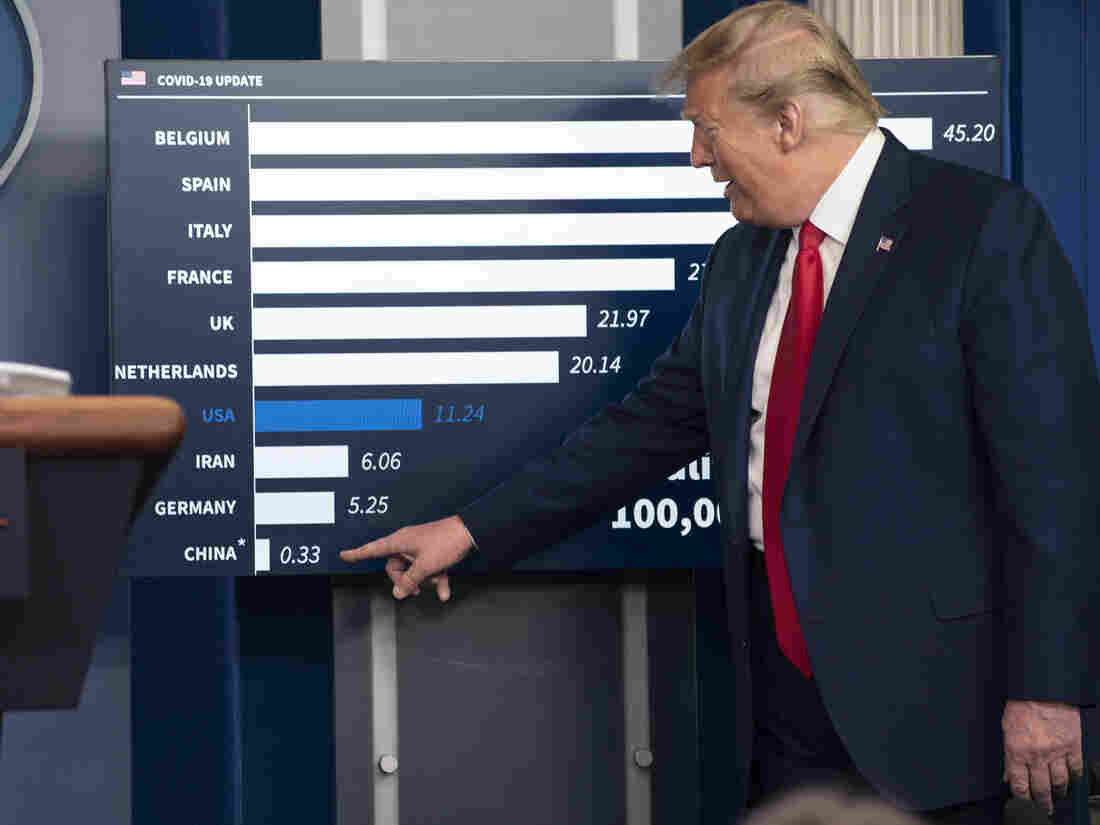 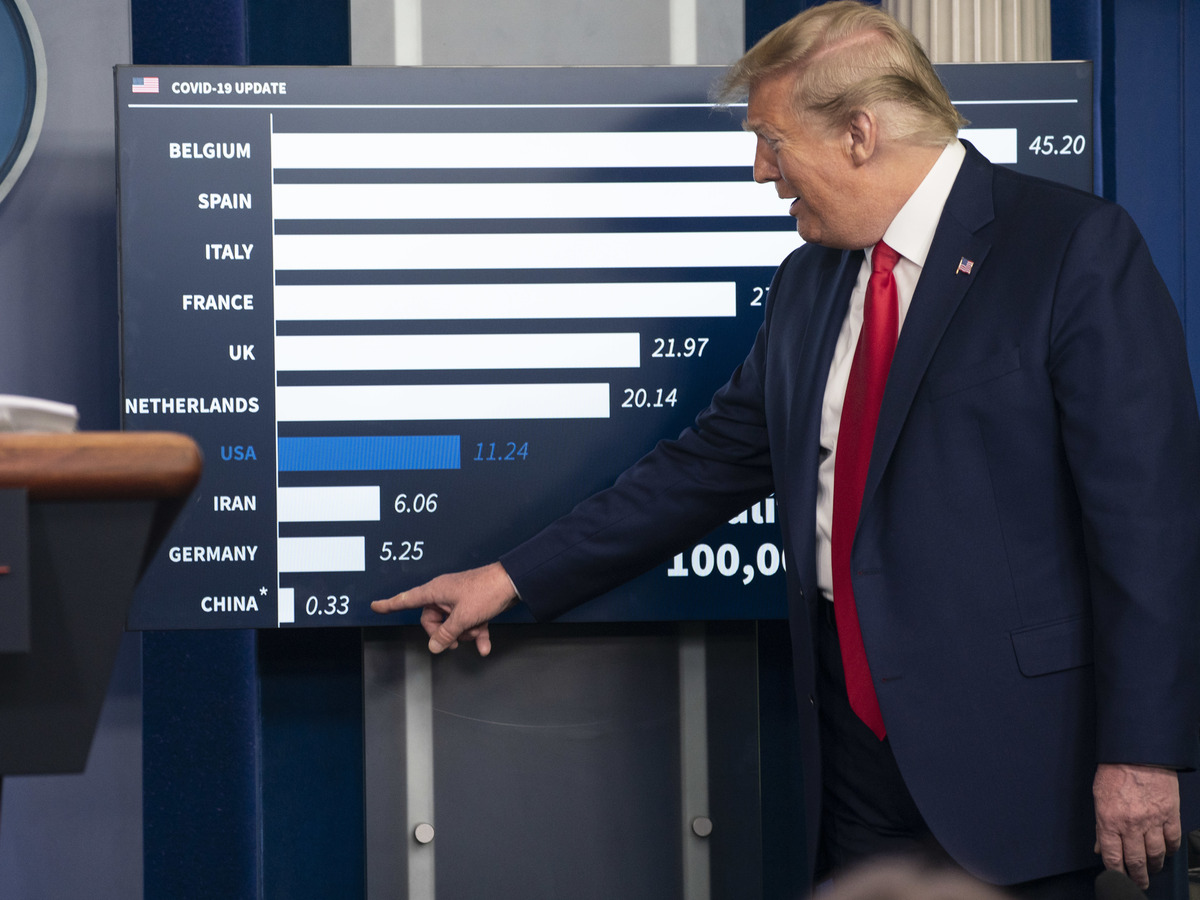 President Trump points to an infographic during a press briefing with members of the White House Coronavirus Task Force on Saturday. Trump questioned China's reporting of its mortality rate.

If China was responsible for the coronavirus outbreak, the country should face consequences, President Trump said at Saturday's White House briefing.

"If it was a mistake, a mistake is a mistake," Trump said in response to a reporter's question. "But if they were knowingly responsible, yeah, I mean, then sure there should be consequences."

Trump has offered no evidence that the Chinese were responsible for the pandemic, but did say that a U.S. investigation into the outbreak is ongoing.

Trump also voiced doubts on the death rate being reported by Chinese officials. At one point, when Dr. Deborah Birx, the White House coronavirus response coordinator, was presenting charts comparing the U.S. mortality rate to that of other countries, Trump interrupted.

As Birx moved to the next slide, Trump asked her to go back to the mortality chart, where he then expressed incredulity about Iran's reported mortality of 6.06 out of 100,000.

"The United States has produced dramatically better health outcomes than any other country, with the possible exception of Germany," Trump had said at the start of the briefing.

Trump also defended a Friday tweet urging the people of Virginia to "LIBERATE" and protect their Second Amendment rights. Trump said that Democratic Gov. Ralph Northam, who last week signed into law a slate of gun control bills, was trying to chip away at the right to bear arms.

"Where does it all stop?" Trump said.

The briefing came as activists were holding protests over social-distancing restrictions in states across the country with stay-at-home orders, calling for a reopening of the economy. Protests were held in cities, including Salt Lake City, and Annapolis, Md.

Trump on Friday seemed to openly encourage these types of protests in a series of tweets mentioning Michigan and Minnesota, two states led by Democratic governors who have imposed social-distancing restrictions.

Asked on NPR about the stay-at-home protests, Ohio Gov. Mike DeWine, a Republican, said: "People have every right to demonstrate, this is what I've said to people who were protesting against me. ... It is what it is."

"We were very early in taking some very dramatic steps to protect Ohioans, and I'm going to continue to do that," he said. "But at the same time, I understand the demonstrators, they want to get the economy moving again."

On Thursday, Trump issued a set of guidelines for reopening the country, a plan that includes three phases for states to reopen, with progressively relaxed levels of social distancing. It remains unclear how long it could take to put those measures in place across the U.S. Those guidelines though, are broad, and leave specific plans up to governors.

Ahead of Saturday's briefing, Trump was on Twitter, weighing in on a variety of topics, including the November election.

Vice President Mike Pence, who is leading the administration's task force in charge of responding to the coronavirus, traveled to Colorado on Saturday to deliver an in-person speech at the U.S. Air Force Academy's commencement ceremony.

It was a rare outing for Pence. Both he and Trump have skipped most travel, including campaign events, as health experts recommend that Americans avoid travel and gatherings to stem the virus' spread.

Trump said Friday he planned to deliver a commencement speech to the graduating class at the U.S. Military Academy at West Point, saying that he assumed there would be social distancing.

In Canada, Prime Minister Justin Trudeau announced Saturday that the border with the United States would remain closed for nonessential travel for another 30 days.

"This is an important decision and one that will keep people on both sides of the border safe," Trudeau said.

On Friday, Trump spoke by phone with Mexican President Andrés Manuel López Obrador and, according to a White House statement, "discussed the need to maintain restrictions on travelers crossing their land borders for non-essential purposes, while ensuring cross-border activities that are critical to commerce, health security, supply security, and other essential industries remain unimpeded."