Accessibility links
David Allen Sibley Offers Some Thoughts On 'What It's Like To Be A Bird'? David Allen Sibley's name is synonymous with his bird field guides. In researching this volume, he became convinced of something new: Birds make complex decisions and experience emotions. 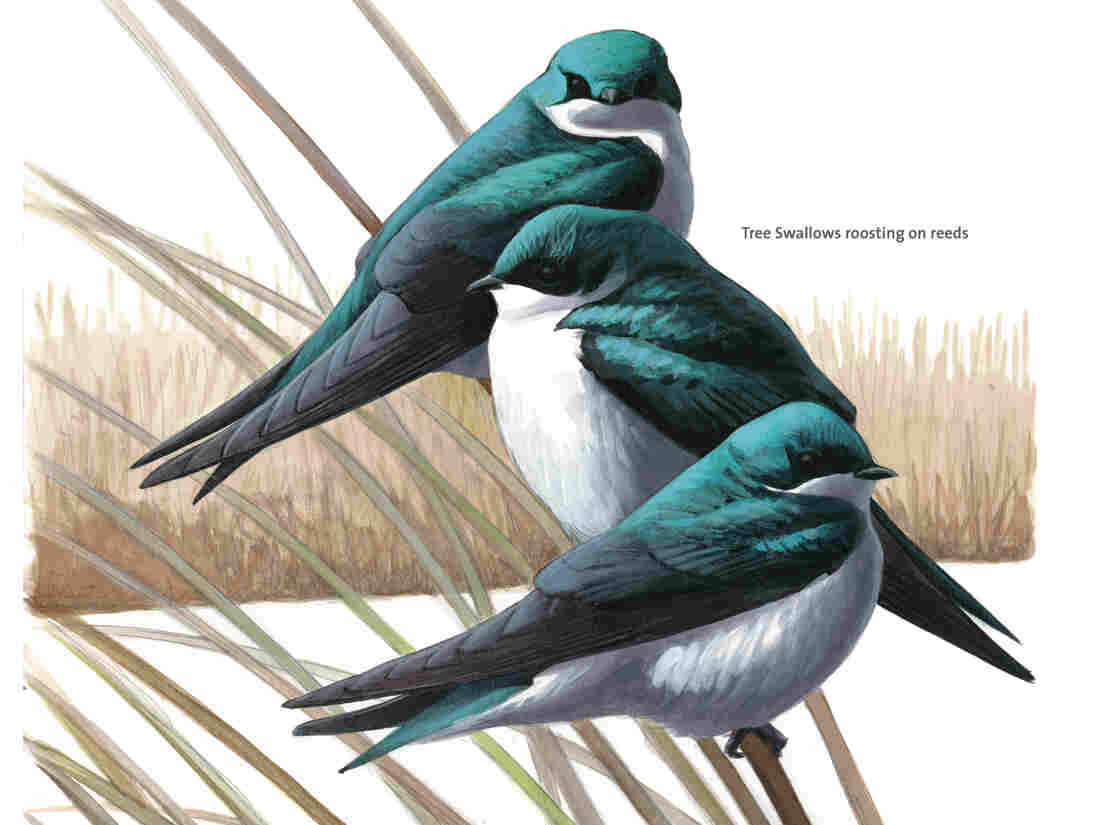 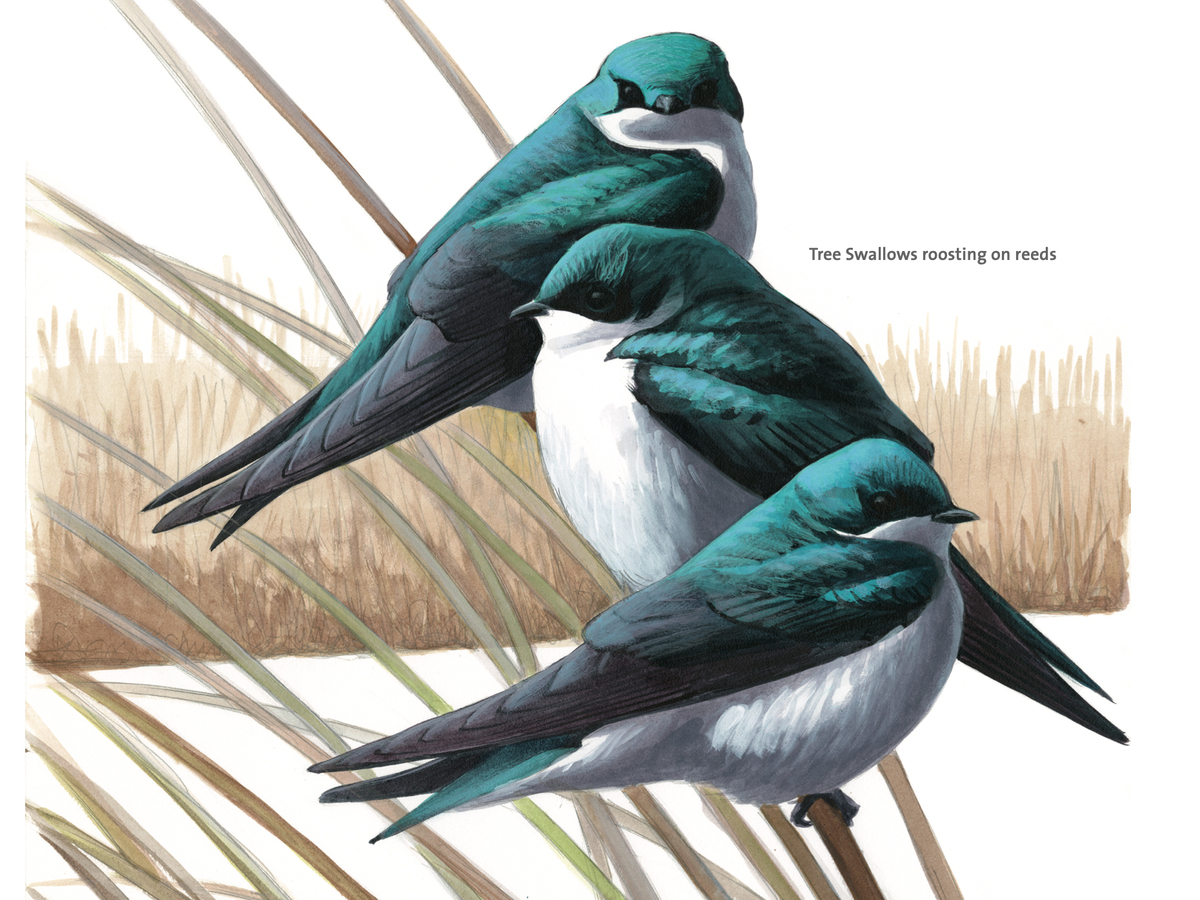 A page on Swallows from David Allen Sibley's What It's Like To Be A Bird.

"A bird's experience is far richer, complex, and 'thoughtful' than I'd imagined."

This sentence on the first page of David Allen Sibley's What It's Like to Be a Bird is a stunner. A renowned author-illustrator of bird field guides, Sibley is a top bird expert. When he did research for this new volume, though, he became convinced of something he had not previously anticipated: Birds routinely make complex decisions and experience emotions. 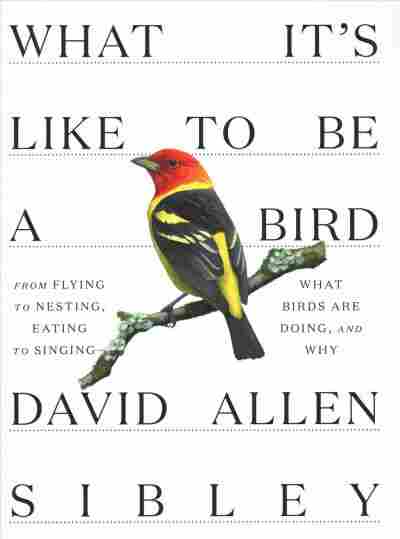 Title
What It's Like to Be a Bird
Subtitle
From Flying to Nesting, Eating to Singing - What Birds Are Doing, and Why
Author
David Allen Sibley

"And if that was news to me after a lifetime of watching birds," Sibley writes, "it must be surprising to other people as well." Wholly engaging, What It's Like to be a Bird is a feast for the mind and, thanks to Sibley's gorgeous illustrations, the eye.

Often when birds forage, they think. Titmice are small songbirds related to chickadees who use reasoning to figure out which seeds offer the best return for effort expended. It won't automatically be the biggest seeds around, because "if a small seed has high fat content and a lot of calories it could be the best choice." This "multi-faceted decision-making is going on every time a titmouse visits a bird feeder." Birds may decide to eat later in the day when they spot predators near, thus keeping at flight-ready status in case escape maneuvers are needed.

To be called "bird-brained" is clearly a compliment. Egrets strike at fish in the water to make a meal. But thanks to refraction, the fish isn't actually located where it appears to be. "Knowing where the real fish is requires a complex calculation of light and depth," Sibley notes. Experiments reveal that when egrets adopt a certain angle as they forage, they never miss striking their prey.

Emotion may be harder to measure in the field, but Sibley believes that bird mates feel genuine attraction for each other. It was sobering to learn that behind the "birds mate for life" meme is a sad statistic: Most often they're together for a single breeding season. Despite famous and heart-warming exceptions, most birds live less than one year. 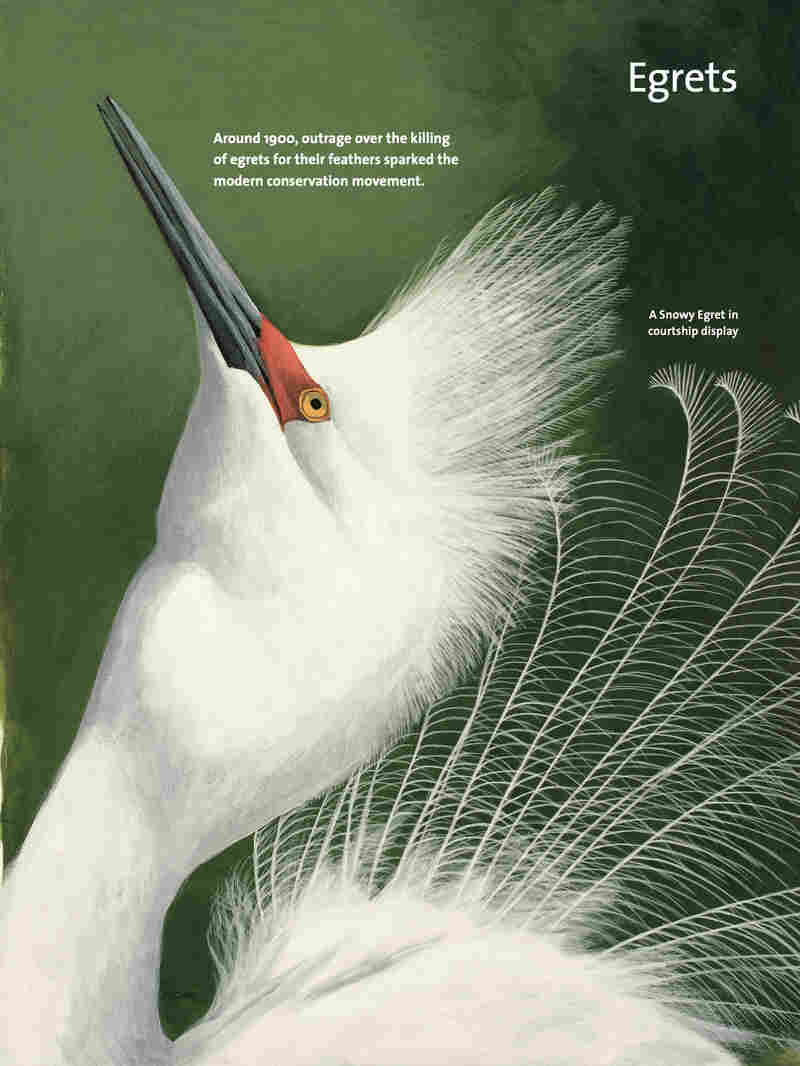 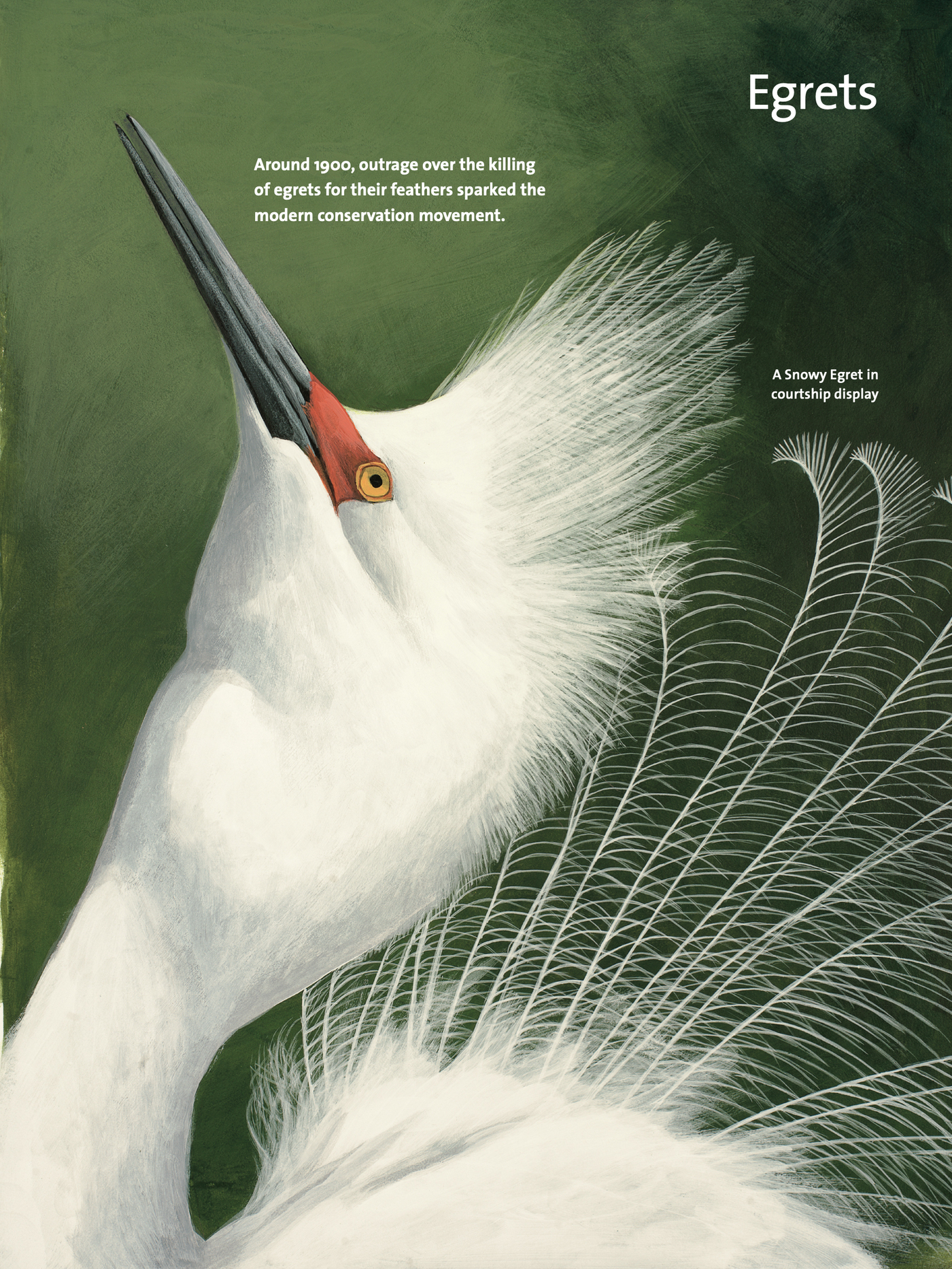 A page on Egrets from David Allen Sibley's What It's Like To Be A Bird.

Sibley's main aim is to ignite appreciation of the varied North American birds we may encounter in our backyards and nearby parks. Owing to the COVID-19 pandemic, right now many of us yearn for greater connection to nature close to home, so the book's timing couldn't be more perfect. The volume's organization — "each essay focuses on one particular detail of bird biology"—means it's equally rewarding to dip in here or there, or just read straight through.

Size, color and behavioral habits all aid bird-watchers in distinguishing among species. I have managed to live for six decades as an animal lover without realizing that most one-month-old birds are fully grown: "A smaller bird at your bird feeder is not a baby, it is a different species."

Usually males are just a little larger than females, although in hawks, owls, and hummingbirds females are substantially bigger. That extra body mass might aid females' warming their eggs and young chicks, whereas males' greater agility might result in efficient grabbing of small prey used to provision females during incubation.

The nature of parental care in birds varies tremendously. Baby songbirds, like swallows, hatch naked with eyes closed, and require intense feeding and care. By contrast, the chicks of loons —"iconic symbols of the clean northern lakes they require for nesting" — swim the same day they hatch. By three weeks of age, the babies can pursue fish with hundred-foot-underwater dives. Yet there's still a role for learning and practice: Loon youngsters at first succeed in finding a meal only 3 percent of the time.

Across species, males and females may vary in color; colors may change across the life cycle; and even between seasons birds may look entirely different. The vibrant yellow of a male goldfinch in summer is iconic, but would we recognize the same bird appearing entirely drab in winter? Across several essays, Sibley delves into the "how" of bird coloration. Did you know that no blue pigment exists in birds? "All blue color is produced by the microscopic structure of the feathers"— a principle Sibley goes on to explain cogently. 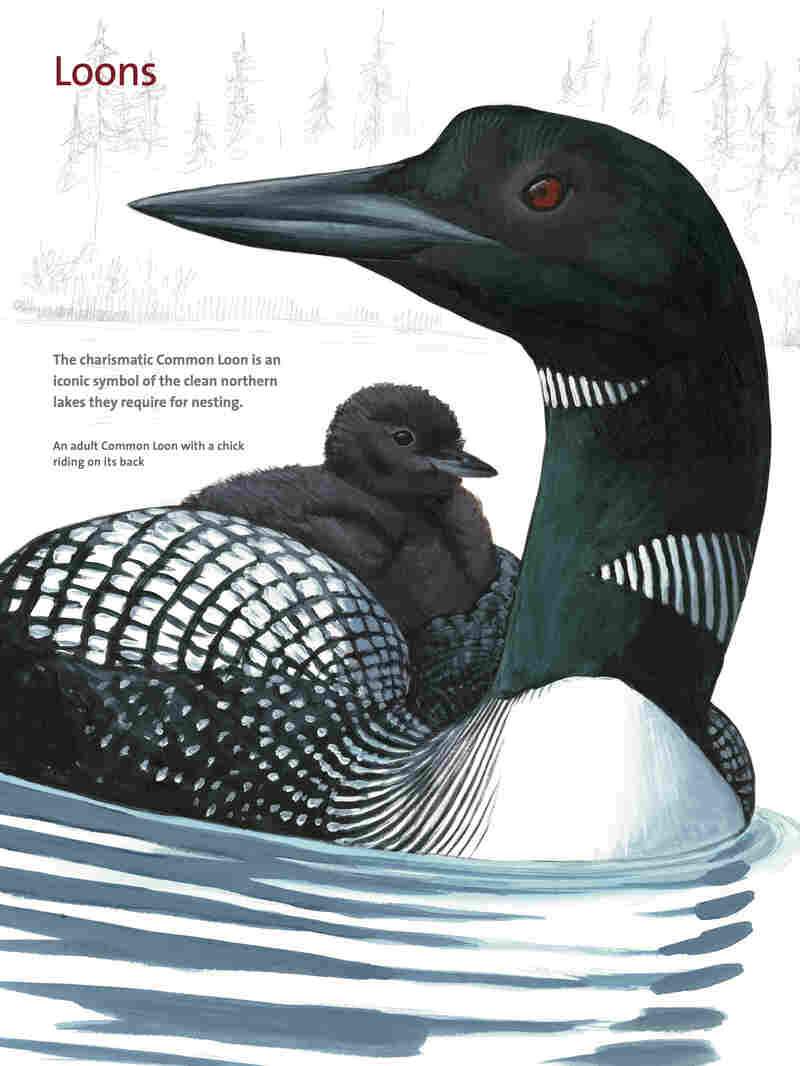 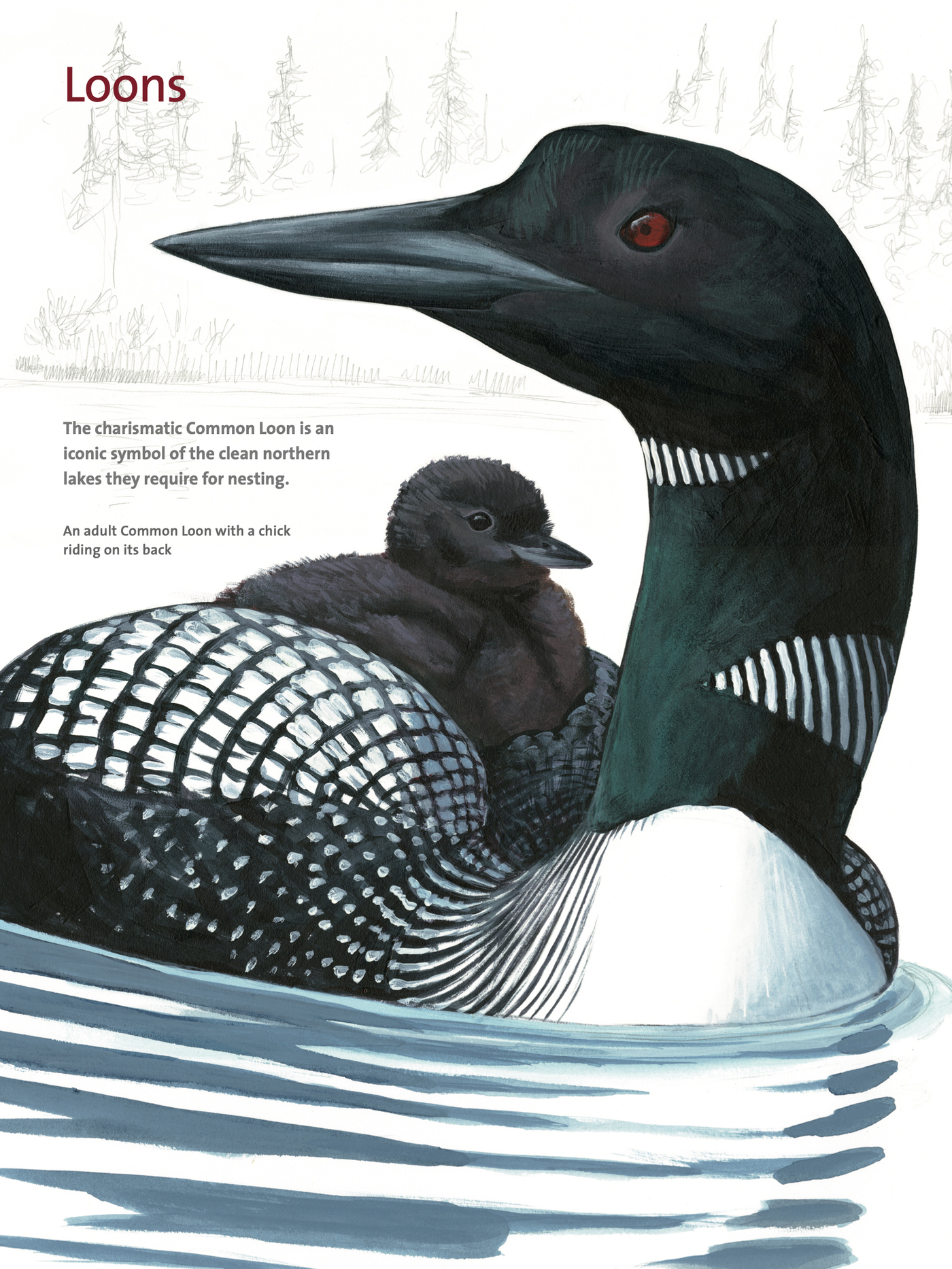 A page on Loons from David Allen Sibley's What It's Like To Be A Bird.

Behavior matters too. Wrens' characteristic body bounce when aroused or excited, for instance, helps "distinguish them from other small songbirds at a glance."

Sibley packs the text with cool facts. A wild turkey, like all birds, lacks teeth, but can crush whole walnuts in the muscular gizzard. Tundra swans hold the record for most feathers counted on any bird — 25,000. The peregrine falcon makes flight turns at 27 Gs ("humans lose consciousness at 9 Gs"). Parent chickadees may collect 1,000 caterpillars in a day to feed their nestlings.

Occasionally, Sibley presents birds ways that seem to me unpleasantly commodified. He describes goose down as "the most efficient insulation known, sought after" for jackets and sleeping bags and reports that globally the most common bird is the domestic chicken, "about 500 million egg-layers and the rest being raised for meat." Why not devote a line or two to calling out cruelty in these industries? He does not shy away from other ethical reminders, saying that it's a bad idea to "rescue" most baby birds, who don't actually need our help. We should resist the lure of adopting baby crows observed on the ground: "They are wild animals and are severely handicapped by having humans as foster parents."

Sibley invites an engaged approach to bird-watching: "You will learn faster if you can be an active observer — draw sketches, take notes, write poetry, or take photos. All of these things make you look a little more carefully and a little longer."

Lingering over every page of What It's Like to Be a Bird, this is what can be seen: The book's beauty mirrors the beauty of birds it describes so marvelously.