Scientists Are Human, Too: Questions For Cartoonist Tom Gauld

Scientists Are Human, Too: Questions For Cartoonist Tom Gauld 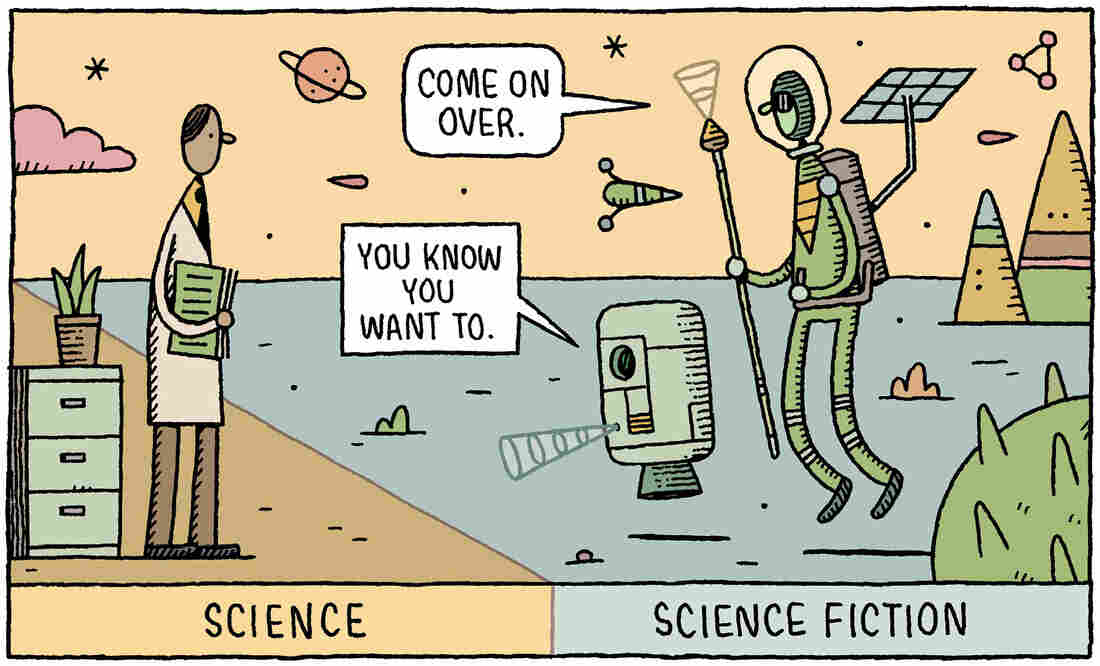 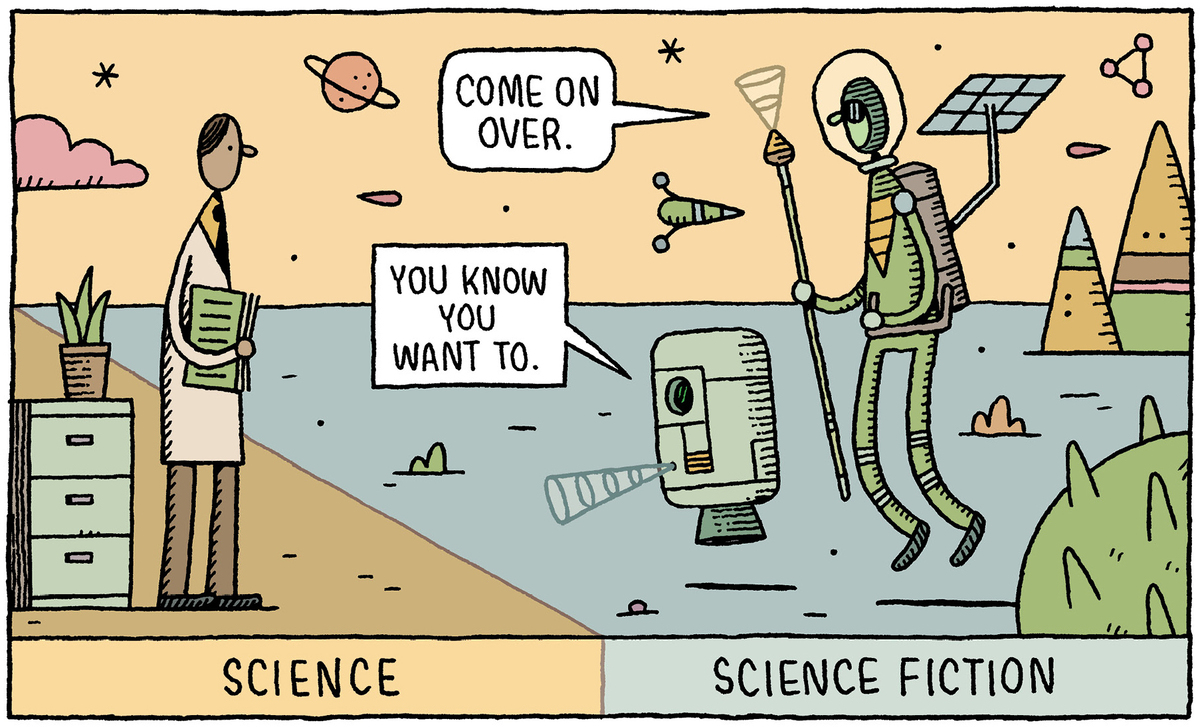 From Department of Mind-Blowing Theories by Tom Gauld.

Cartoonist and literary jokester Tom Gauld usually lampoons classic novels and the predicaments of the writing life. But in his new book, Department of Mind-Blowing Theories — collecting comics from his ongoing column in New Scientist magazine — he turns his pen to the realm of science (and occasionally science fiction). 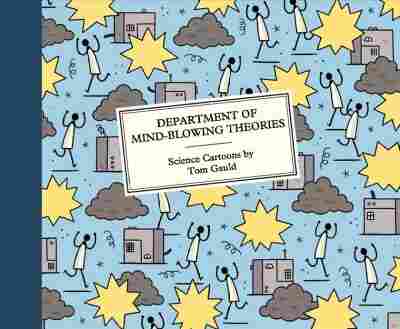 In an email interview, Gauld tells me his grandfather, a marine biologist, was one of his influences as he was drawing these comics.

"I don't recall talking to him much about his work while he was alive, but I do remember going to visit him at the University where he worked when I was quite young and getting a tour of the museum," Gauld says. "He was a quiet and thoughtful man and I think because of him, the whole family had a respect for science and scientists. He subscribed to New Scientist (the magazine where the cartoons in this book first appeared) and would give them to my Dad after he'd read them, so there were always copies around our house as I was growing up.

Scientists are having a hard time right now — misinformation is so hard to combat, and increasingly people seem to want to believe what accords with their own politics. Why did you decide to create this book, right now?

You're right, I think scientists are getting an unfairly tough ride at the moment. I like to think that this book, even while it is making fun of scientists, expresses my genuine admiration for what most of them do. Hopefully the cartoons feel like teasing from a friend.

As a sci-fi and fantasy nerd, of course I love the cartoon of the scientist being tempted by science fiction. Where did that one come from?

I think the scientist character in that cartoon is a bit like me when I'm making these cartoons, because I have to resist the temptation to draw silly robots and over-the-top science fiction technology every week. I am a SF/F nerd myself and while that's one of the things that draws me to science, I have to remind myself to look in all the different areas of science to find cartoon themes. 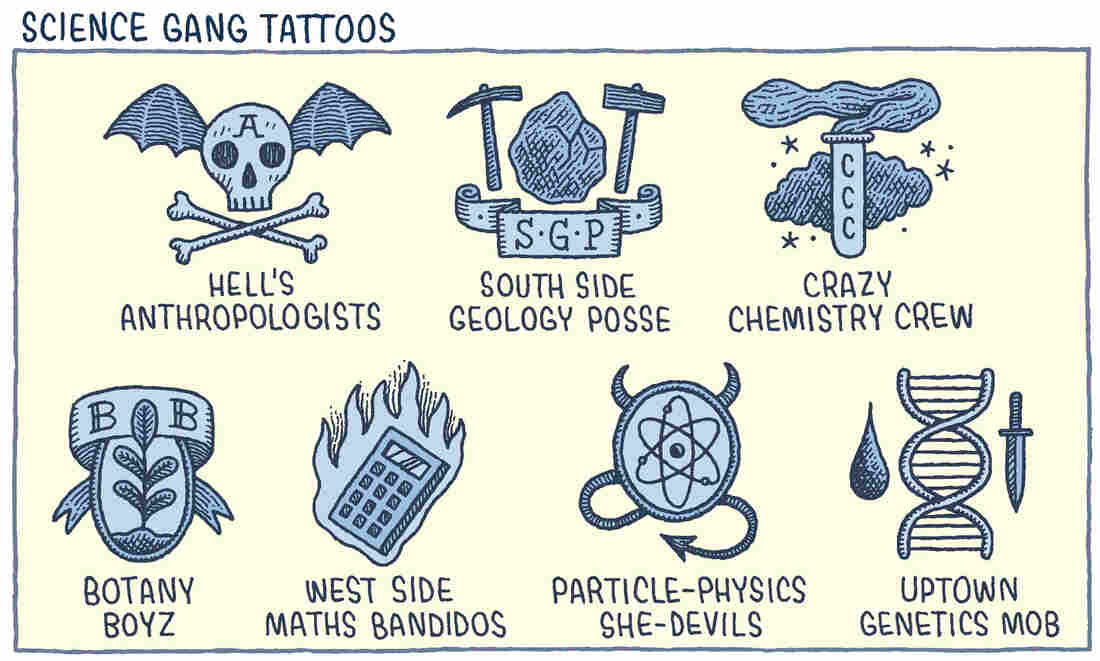 If you had to get one of the science gang tattoos, which one would it be, and why?

I think I'd go for Southside Geology Posse. Partly because I like the sound of being in a posse, but also because I imagine it would be nice to wander the hills (with my fellow posse members) occasionally tapping a rock with my hammer, so it would break neatly in half, revealing an amazing fossil or a gigantic diamond.

If you had to identify a theme or an idea that runs through this whole collection, what would it be?

There sometimes seems to be an idea that in order to be a scientist you have to put aside your humanity and become an emotionless logic-machine. I think that's wrong, but some people (even some scientists) seem to believe it. There's a thread running through the book of cartoons that depict scientists being human: Being unsure, bickering, misunderstanding, and messing things up. It's much more fun (and realistic, I think) to depict flawed, klutzy humans than idealised successes.

When someone finishes this book and puts it down, what do you want them to take away from it?

At the simplest level, my aim is just to entertain people and hopefully take their minds off their worries for a few minutes, which at the moment is probably quite useful for most of us. But I'd like to think that the book could also spark interest in some readers to find out more about some aspect or other of science. 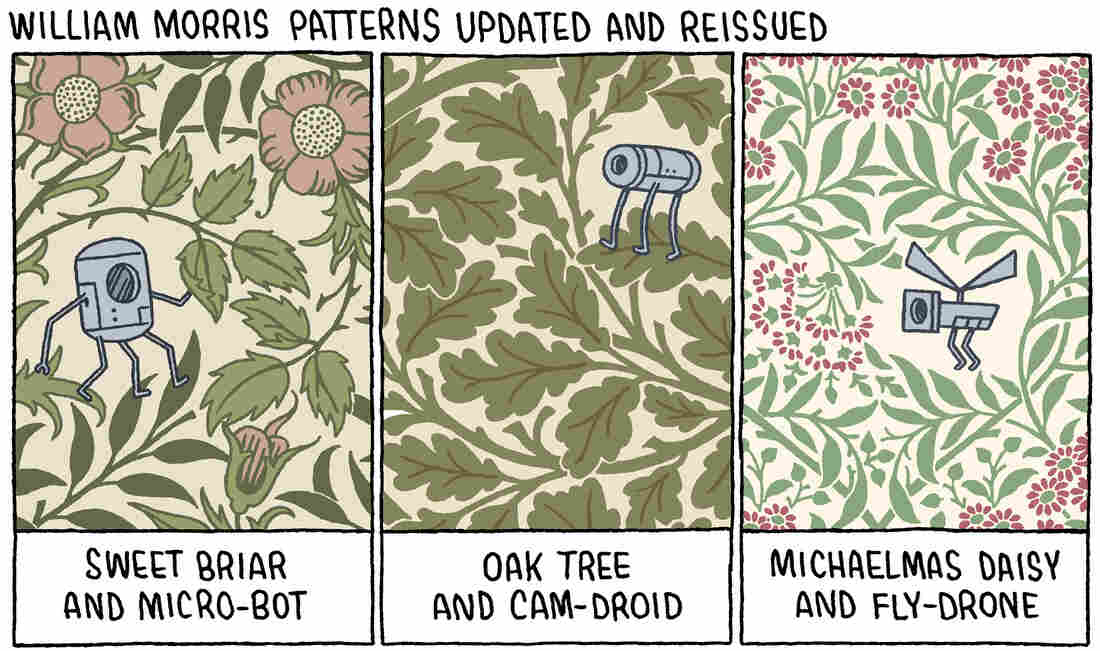 And this is just for me — oh my god, the William Morris one! what do you think he'd make of your updated patterns?

I'm glad to hear that you like that one. I expect he'd be horrified, unless the robots were handmade in an English village by artisans in smocks.