Accessibility links
Closed Schools Create More Trauma For Students During Coronavirus School counselors say the coronavirus pandemic has so destabilized kids' lives that the result is genuinely traumatic. And closed schools make it harder for counselors to help. 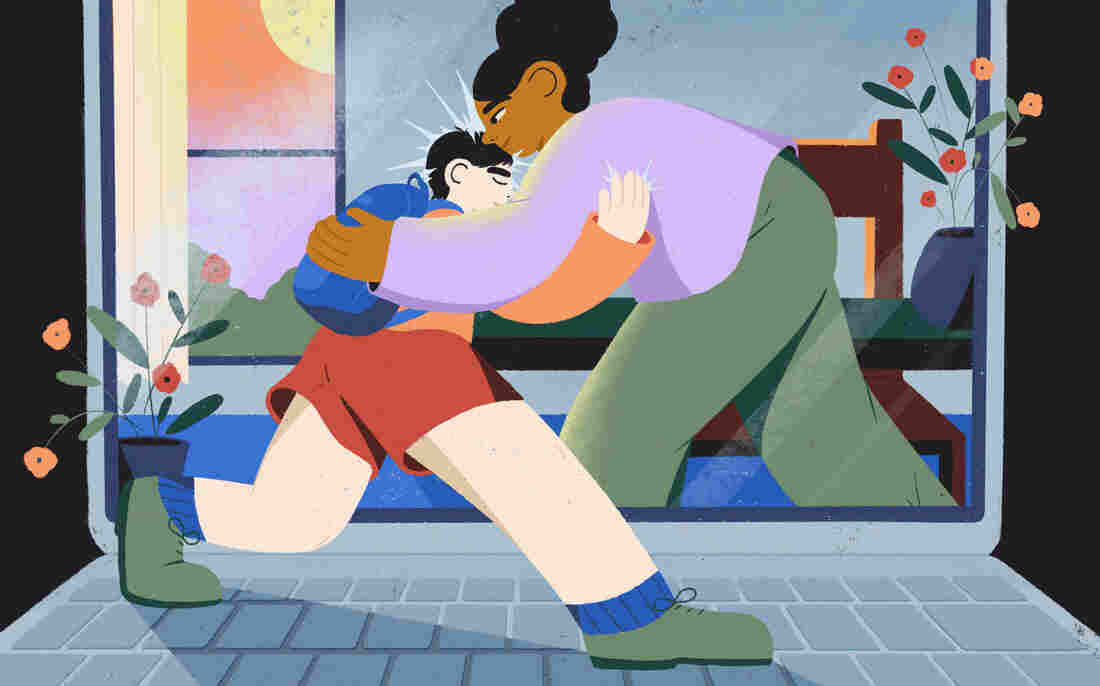 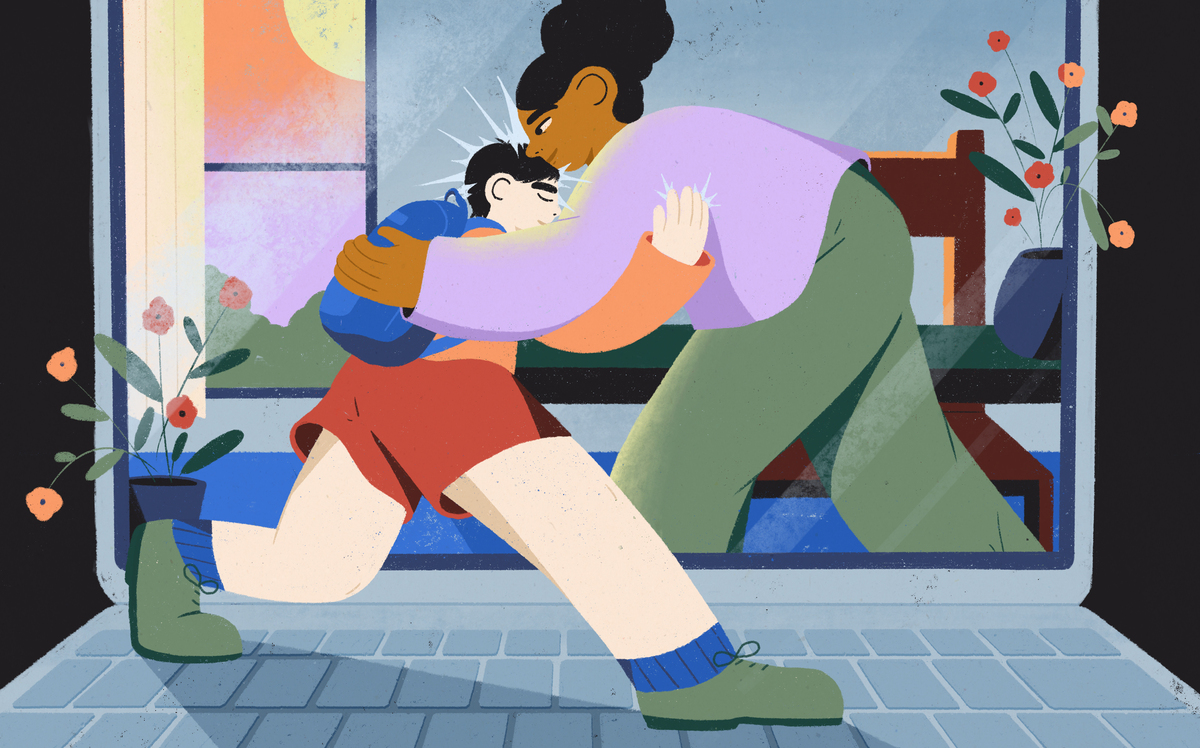 The high school senior sitting across from Franciene Sabens was in tears over the abrupt amputation of her social life and turmoil at home. Because of the coronavirus, there will be no prom, no traditional send-off or ceremony for the graduates of Carbondale Community High School in Carbondale, Ill. And Sabens, one of the school's counselors, could not give the girl the one thing Sabens' gut told her the teen needed most.

"I want to hug them all, but I really wanted to hug that one," Sabens remembers.

Instead of a desk between counselor and student, there were miles of Internet cable and a computer screen. No hug. No private office. This is Sabens' new normal.

"Zoom is just not gonna ever bridge that gap," she says. "That one was pretty rough."

The job of the school counselor has evolved over the years, from academic guide to something deeper: the adult in a school tasked with fostering students' social and emotional growth, a mental health first responder and a confidant for kids, especially teens, who often need a closed door and a sympathetic ear. But the closure of nearly all U.S. schools has forced counselors like Sabens to reimagine how they can do their jobs. And the stakes have never been higher.

Why students need counselors now more than ever

To Stay In Touch With Students, Teachers Bypass Computers, Pick Up Phones

Sarah Kirk, an elementary school counselor in Tulsa, Okla., is especially worried about her students who were already at-risk, whose families "really struggle day to day in their homes with how they're going to pay the next bill and how they're going to get food on the table. Being home for this extended period of time is definitely a trauma for them."

For so many children, Kirk says, "school is their safe place. They look forward to coming. They don't want to leave when the day is over. And to take that away from them, I do worry about the traumatic experience that will cause for many of our students."

Counselors say part of the trauma comes from students being isolated from each other.

"In a middle school, that social piece is so important," says Laura Ross, a middle school counselor in Lawrenceville, Ga. Yes, they do a lot of connecting via social media, and that's still happening, "but that face-to-face and being with their friends... they're missing that."

It's OK to not be OK. I mean, most of the world is not OK right now... It's OK to grieve about what you're losing because it is tragic.

Unfortunately, there are no easy answers. Instead, Sabens says, she tries to let students know "that it's OK to not be OK. I mean, most of the world is not OK right now... It's OK to grieve about what you're losing because it is tragic."

Brian Coleman, a high school counselor in Chicago, says trauma is nothing new to many of his students, but he hopes awareness of the potentially traumatic effects of school closures means "trauma-informed care is going to really, really explode in ideally healthy, meaningful ways."

That means school leaders should right now be planning for the future, asking how they can best support students when they come back to school, Ross says, "making sure that we're prepared to deal with some of those feelings that are going to increase — of anxiousness, of grief, of that disconnect that they had for so long."

Not only are many students grieving and struggling with new trauma, it's also harder now for school counselors to help them. That's because counselors have lost one of the most powerful tools they had before schools closed: access. Before, counselors could speak to entire classrooms about bullying and how to manage their feelings, plus they enjoyed office space where students could drop in for a quick visit or schedule a tough conversation.

The Biggest Distance-Learning Experiment In History: Week One

"I think about my eighth graders," says Laura Ross in Lawrenceville. "My office is in their hallway. I mean, they just stop by to say hello. They stop by when they're upset, just to come in and talk and, you know, figure out their feelings."

But all of that has changed. Today, a face-to-face video meeting is the closest a counselor can get to the old ideal. Before that can happen, though, Sabens says she has to find her students.

Connecting is even more complicated for elementary school counselors whose students generally don't have cell phones or email addresses. In Tulsa, Sarah Kirk says this inability to speak directly with children is "exactly what keeps me up at night."

So far, Kirk has mostly been in contact with parents and caregivers. "That's whose [phone] number I have... But it's really up to the parent if they want to hand the phone over [to the student]." She worries that, if a child is not OK at home and needs help, she won't know.

Kirk's focus on these calls has also shifted away from academics toward "the basic needs of our kids... making sure they have enough food. We're making sure they're safe."

Ramirez, a first-generation Mexican-American, says online learning can put additional strain on immigrant and low-income families. "I feel for the students whose parents don't know English or don't really know how to help their students."

"It's no longer private"

NPR spoke with counselors across the country, from California to Georgia, Oklahoma to Ohio, and nearly all said they worry about even the best-case scenario — when they're able to connect with a student face-to-face using video chat technology. Their fear: privacy.

At school, "we have some sort of office space... where students can feel like they're having a private conversation with counselors," says Coleman in Chicago. "Now we're asking them to be vulnerable in some capacity at home. And for so many students, home is a space where they're triggered or they don't feel comfortable sharing ... because it's no longer private."

Yes, the student's bedroom door may be closed, says Ramirez in Redwood Valley, but "at any given point, someone can walk in or, you know, mom's down in the living room. She can probably hear [our] conversation." And that might keep students from really opening up about things like basic stress or even abuse.

The same holds true for many elementary school counselors.

"We do small group counseling for kids [who] are adjusting to a variety of changes, and there's an element of confidentiality that's built into that group," says Marie Weller, an elementary school counselor in Delaware, Ohio. "So I can't do a group online. I can't use Canvas or Zoom or Google Hangouts for a group because I can't get the confidentiality. So [I'm] trying to figure out, how can I check in?"

In Lawrenceville, Laura Ross admits: These have been trying times. But there's also a surprising upside, she says. The distance from students has forced her to get creative about how she uses technology to build a bridge back to them.

'There's A Huge Disparity': What Teaching Looks Like During Coronavirus

Before the outbreak, Ross helped create an after-school club for students who identify as LGBTQ+. When school closed, Ross set up a Google Classroom and asked if the club's members wanted to continue to meet virtually. "They definitely did. And the reactions were just a relief that they were still going to have the support of that club... the place that they could truly be themselves."

Ross says they even meet at the same time each week, just on Zoom.

On her last day in the office, before Ohio closed its schools, Marie Weller remembers starting to leave — then hesitating beside the childlike puppets she sometimes uses in her classroom counseling presentations. "Huh," she thought. "Maybe I'll be able to use these."

Weller and her fellow elementary school counselors say one important part of their job is making sure all students have the social-emotional skills and coping strategies they'll need to navigate a complex world. How can they do that now, from home?

She set up a smartphone camera in her house, surrounded by those puppets — a kind of surrogate classroom audience — and set about recording mini counseling lessons from her kitchen. Instead of the chime she normally uses to begin a lesson, she rings a mixing bowl with a red spatula. To teach kids about how and why they should filter what they say, leaving hurtful thoughts unspoken, she opens the coffee maker to show them how a real, paper filter works.

Weller does her own editing and even got permission from folk music favorites The Irish Rovers to use their song "What's Cooking In The Kitchen" as her opening theme. The resulting videos are brief, rich and charming, with lines like, "Your brain's amygdala acts like a guard dog."

And in Tulsa, Sarah Kirk is doing something similar, posting videos where she's sitting on the floor of her house, surrounded by colorful pennants and stuffed animals. Her dog, Crew, a cuddly 80-pound sheepadoodle (nearly as big as Kirk), even makes a camera-blocking cameo.

In her first episode, Kirk read a story meant to reassure children she can no longer hug. It's about how we all have an invisible string that connects us, even when we're far apart.