Accessibility links
Many States Say Cannabis Is Essential, But Advocates Say More Needs To Be Done Over 20 states have designated marijuana businesses essential during the coronavirus shutdown. Cannabis activists say it's a remarkable development, given that pot remains illegal under federal law.

'Illegal To Essential': How The Coronavirus Is Boosting The Legal Cannabis Industry

'Illegal To Essential': How The Coronavirus Is Boosting The Legal Cannabis Industry 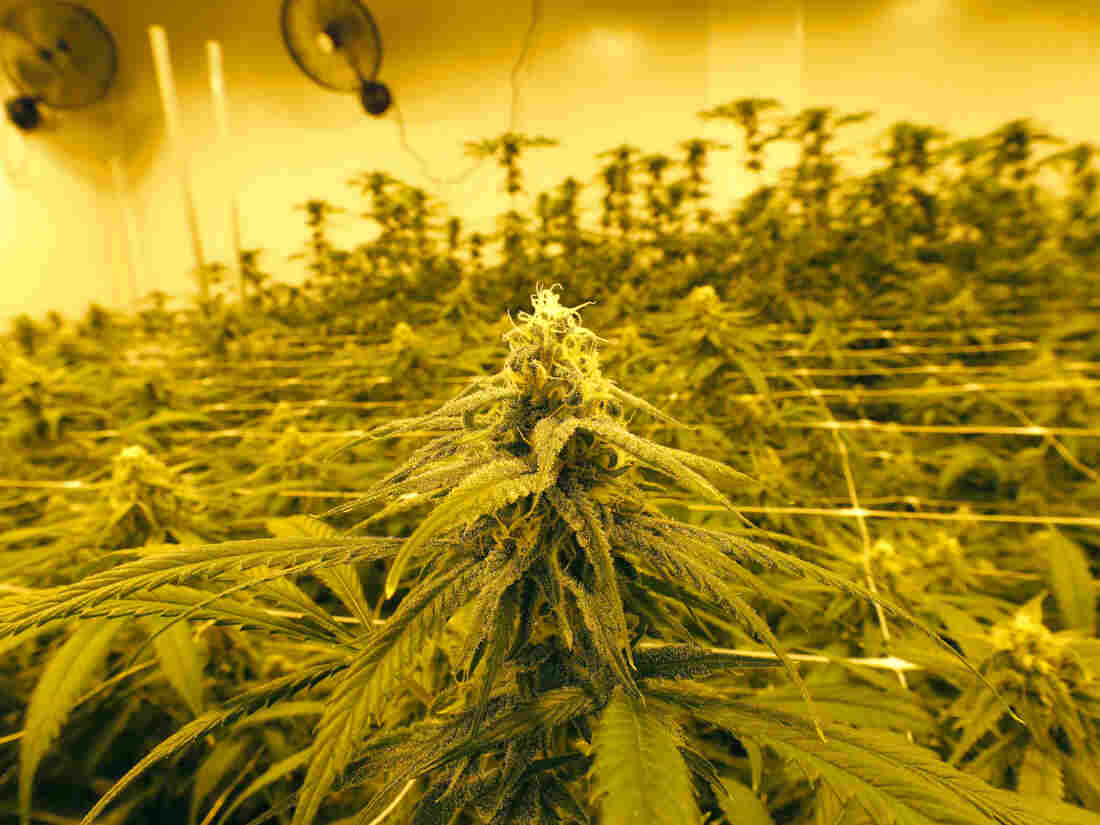 Louisiana, like many other states where cannabis is legal, has designated the cannabis industry as essential. Above, marijuana plants grow under special lights at GB Sciences Louisiana, in Baton Rouge. Gerald Herbert/AP hide caption 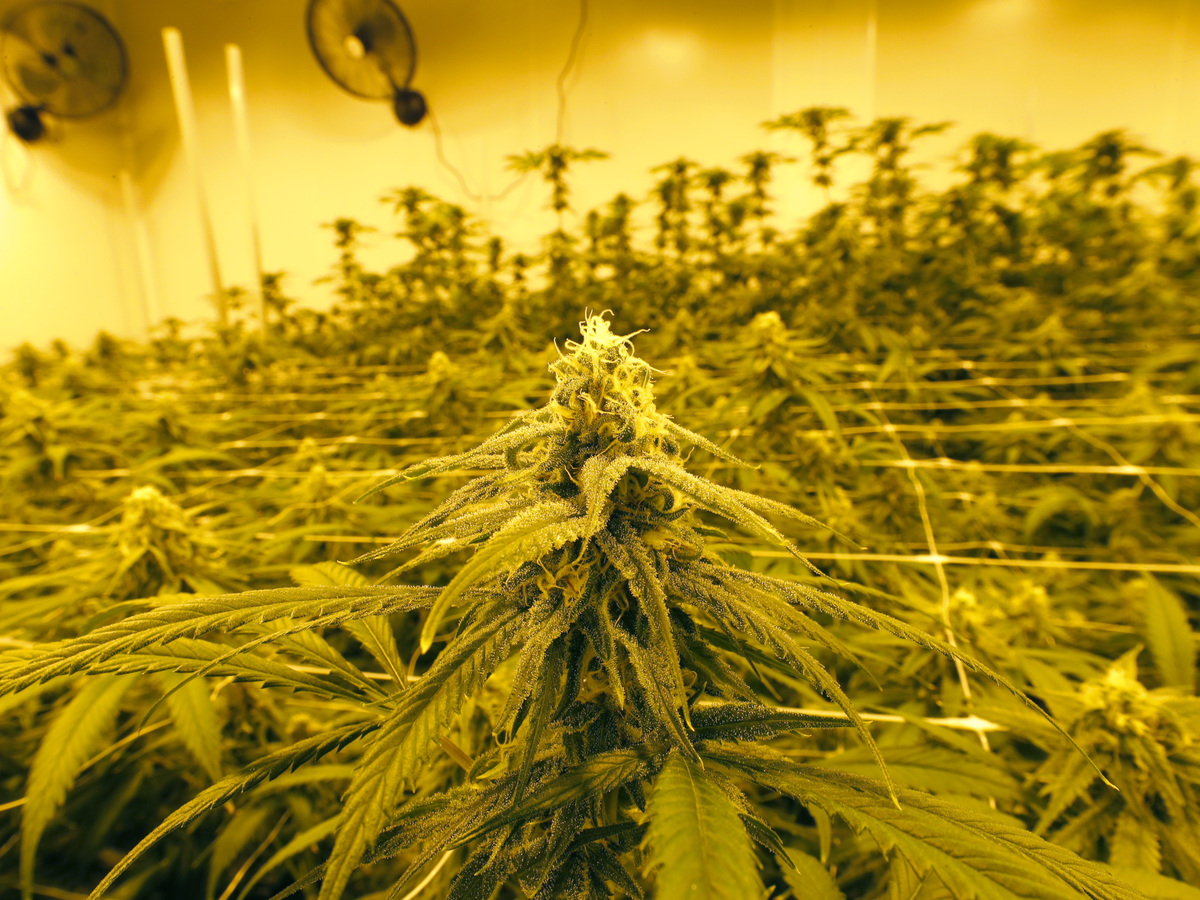 Louisiana, like many other states where cannabis is legal, has designated the cannabis industry as essential. Above, marijuana plants grow under special lights at GB Sciences Louisiana, in Baton Rouge.

The coronavirus crisis could be igniting a revolution of sorts in the legal cannabis industry.

Thirty-three states across the U.S. allow for some form of sale and consumption of marijuana. And of those, more than 20 states have designated the cannabis industry as essential during the coronavirus outbreak.

While advocates are applauding many of the interim marijuana laws, they also say those laws exposes dangerous disparities among states.

Twenty-four states, including Florida, Connecticut, Pennsylvania and New Mexico, have permitted customers to pick up marijuana purchases curbside at dispensaries.

Nevada has shut down all storefronts and moved to delivery-only statewide.

Ohio, Delaware and Minnesota have adopted orders allowing patients to consult with a physician via telehealth to receive a medical marijuana prescription.

Cannabis advocates argue that marijuana — which some people take for seizures, pain and nausea — is unlike virtually any other therapeutic. And access to it, whether prescribed by a doctor or not, depends largely on where you live.

"This epidemic and the way the cannabis businesses are being run really highlights the need for federal oversight," said Debbie Churgai of Americans for Safe Access, which advocates for broader access to medical marijuana for therapy and research. "Every state is doing it a different way."

"I couldn't go to the dispensary if I wanted to"

Ahead of the Massachusetts stay-at-home order that went into effect on March 24, Sean Carnell went into prep mode. He spent more than $1,000 on cannabis products to make sure he had enough to last through it.

Carnell, a Marine Corps veteran who served in Afghanistan and now lives in Brockton, Mass., uses cannabis to relieve pain from a traumatic brain injury and numerous surgeries from several service-related injuries.

"I went around and went to some of the best people I know that grow flower, have juices, have candies," Carnell, 40, said. "I just stocked the f*** up. So, if anything happens in the next couple weeks ... I'm good."

Carnell said he has been approved for a medical card, but it still hasn't arrived. It has been months, he said.

"I couldn't go to the dispensary if I wanted to," Carnell said.

Colorado Gov. Jared Polis, a Democrat, designated marijuana a critical retail industry on March 22. His order allows for medical marijuana purchases to be made at shops, and recreational cannabis can be picked up curbside.

But on the heels of that order, Denver Mayor Michael Hancock mandated that dispensaries in the city would be closed the following day.

That led to a surge in panic-buying and a record day of sales, said Lisa Gee, an executive with Lightshade Labs. Her company operates roughly a dozen stores in the Denver area.

"I said to a couple of my colleagues, 'I'm not sure whether to send the mayor cookies or go TP his house,' " Gee added.

Hours after making the announcement, the mayor reversed course and allowed dispensaries to stay open, so long as those businesses practiced "extreme physical distancing."

But for Gee, the biggest victory came with the governor declaring marijuana businesses as essential.

Cannabis essential in many states, but federally prohibited

Nationally, 27 states with stay-at-home orders in effect have allowed marijuana operations to remain open in some form during the coronavirus economic shutdown. All but four of them have deemed cannabis an essential business, according to a tally by the Marijuana Policy Project.

"Marijuana has been illegal and demonized for decades," said Karen O'Keefe, the organization's director of state policies. "In a lot of states, it went from being illegal to essential in a short amount of time."

The legal marijuana industry has some difficulty operating even under normal circumstances. It is heavily taxed and has difficulty securing financial backing from banks, and because marijuana remains illegal under federal law, cannabis businesses will see no relief from the $2 trillion coronavirus relief package that President Trump signed into law last month.

"In this age of the coronavirus, a lot of those burdens have become dangerous," O'Keefe said. "In the context of this crisis, it's also more of a risk because the people selling marijuana illegally aren't following all the social distancing requirements, sanitation requirements, things like that."

O'Keefe said those concerns should prompt states to further expand access to legitimate businesses during the outbreak.

The pandemic has highlighted how deeply entrenched cannabis is in American society. Legal marijuana sales across the country broke records last month, said John Kagia of New Frontier Data, which tracks sales and consumer trends in the cannabis industry.

"That's a remarkable development for a product that remains still classified as a Schedule I substance under federal law," Kagia said.

Kagia expects that consumers will grow accustomed to the expanded access to cannabis that the coronavirus has brought about in some places and may balk if states repeal the changes once the stay-at-home orders are lifted.

He estimated that more than 43 million Americans consume cannabis regularly and spend some $70 billion a year on both the legal and illicit markets.

Marijuana advocates entered 2020 buzzing about the possibility of as many as 40 states having some form of legal cannabis laws on their books by year's end. The coronavirus crisis likely means that in hard-hit states, such action will not be a legislative priority.

But looking ahead, the industry is pinning its hopes on more states legalizing recreational marijuana. "It's creating strange bedfellows between Republicans and Democrats on an issue where there used to be a lot of polarity," Kagia said.

He added: "Whether you're a Republican or a Democrat, ensuring that this industry is able to operate in a viable and effective way becomes, however you may personally feel about it, something that you have to represent your state's interests in."