Accessibility links
Can Colleges Survive Coronavirus If They Stay Closed In The Fall? Colleges around the U.S. moved classes online during the pandemic. Some are considering keeping their campuses shut in the fall — which means hiring freezes, smaller admissions and even layoffs. 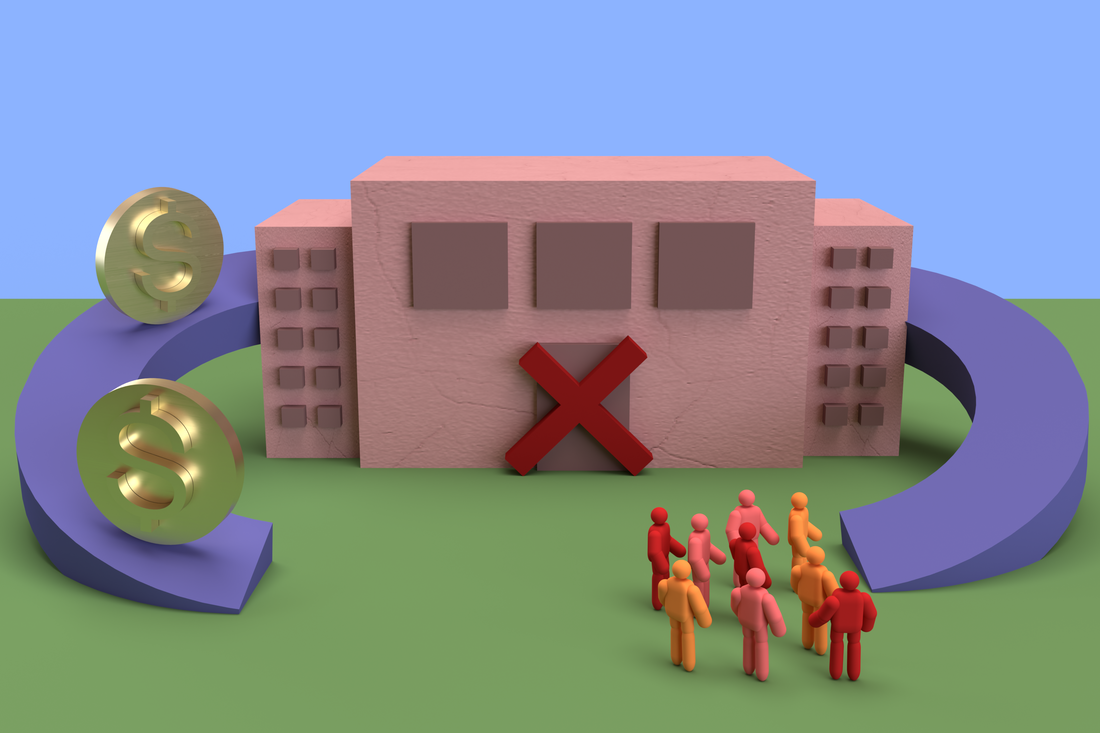 Most campuses in the United States are sitting empty. Courses are online, students are at home. And administrators are trying to figure out how to make the finances of that work.

"The math is not pretty," says Robert Kelchen, who studies higher ed finance at Seton Hall University in New Jersey. "Colleges are stressed both on the revenue side and on the expenditure side."

On one end of the equation, colleges are spending money to take classes online, in some situations purchasing software, training professors or outsourcing to online-only institutions. That's on top of refunds for room and board and parts of tuition. On the other side, money isn't coming back in, in the form of expected tuition and revenue from events such as athletics, conferences on campus and summer camps. College endowments, which can sometimes offer some insulation from hard financial times, have also taken a hit.

"This will touch every sector of higher education. Every size of institution, every region of the country," says Dominique Baker, a professor of education policy at Southern Methodist University in Dallas.

And it already has. The University of Michigan estimates it may lose up to $1 billion by the end of the year. For the University of Kentucky, it's $70 million. Hundreds of schools — including some with endowments of more than a billion dollars, like Duke University, Virginia Tech and Brown — have announced hiring freezes. Other institutions have cut pay and have laid off staff and contractors. In Vermont, state officials have floated potential college shutdowns.

Despite the fact that no institution will be spared, says Baker, the pandemic will affect different institutions in disproportionate ways. "For some colleges, this is an existential threat that means they'll have to close," she says, while others will have the financial backing to weather the storm. What keeps her up at night? Those institutions that serve more vulnerable populations and are in more remote or rural places. Because, she says, they have the potential to feel the financial pain even more. There, students rely on colleges for services such as health care, campus jobs, child care and free food. Baker says those places, which have already been largely underfunded, will be hard-pressed to stay afloat.

The federal government did attempt a buoy: In the CARES relief package passed in March, Congress allocated about $14 billion for colleges and universities, though many have said that's not enough. "Woefully inadequate" is what the American Council on Education called it. The group, along with 40 other higher education organizations, have lobbied Congress for about $46 billion more. And that's a conservative ask, they say.

With less funding, colleges have continued to lean on tuition. But over the past eight years, college enrollment nationwide has fallen about 11%. Every sector — public state schools, community colleges, for-profits and private liberal arts schools — has felt the decline. Over the years, international students, who often pay full tuition, have helped. But now with travel restrictions in play, schools are expecting very few of them this fall.

Fewer Students Are Going To College. Here's Why That Matters

And we're still waiting for colleges to answer the biggest question: What will the fall look like?

"I don't think there's any scenario under which it's business as usual on American college campuses in the fall," says Nicholas Christakis, a sociologist and physician at Yale University who is studying how the coronavirus spreads. "This idea — that we can somehow just get back to normal and go back to school in the fall, because we always have, it's not reasonable, actually. I think we're going to have to figure out other ways of doing this."

Colleges need to have a contingency plan ready, says Bryan Alexander, an educational futurist at Georgetown University. The pandemic, he says, is "going to change things, and the degree depends on the shape of the pandemic in the fall semester."

Cal State Fullerton Announces Plans For A Virtual Fall. Will Other Colleges Follow?

There are many ways a reconstructed fall might look, including the option of continuing everything online, though many colleges that teach in-person still think of that as a last resort. They cite online learning growing pains and an ambivalent faculty. Plus there's some fear that students and their families won't be willing to pay as much for an online offering. Among the ideas being floated for tweaking the in-person model is changing the traditional academic calendar. Instead of starting in August or September, school might open in October or even January. Instead of 16-week semesters, colleges could shift to quarter systems or even shorter, four-week courses to allow flexibility.

Others have floated a hybrid model, with some smaller classes remaining in-person and larger classes going online. Kim Weeden, a sociologist at Cornell, along with colleague Benjamin Cornwell, set out to study this idea using network modeling on enrollment data on Cornell. She was hoping that if they eliminated large lecture classes, students would have less interaction with each other. It turns out, it didn't matter. The close-knit community — often touted as the hallmark of residential campuses — persisted. The researchers found that tight networks existed regardless.

"Just eliminating those 100-person or more classes didn't seem to reduce the small-world nature of the network all that much," Weeden says. Their research — which was published recently in a white paper, but not peer reviewed — was only looking at classes and didn't factor in dorm life or campus events such as social gatherings and athletics.

"There's just so much uncertainty," says Weeden. "You know, a big piece of this, of course, is whether there is going to be [coronavirus] testing available and what those tests can and cannot tell us. And you know, everybody wants to know the answer to that question."

Still, some colleges will be affected less, says Christakis. He points to urban campuses or community colleges that have a large number of commuter students without a residential component. Those schools may be able to thin out the number of students in a classroom and space out when those classes are offered, in order to cut down on crowding and adhere to a semblance of social distancing.

For residential colleges, the question is even harder, since opening campus is more than just classes — it's students living in close quarters, often in a dorm. College campuses are also ripe for outbreaks if the disease doesn't fade, like we've seen happen in the past.

With that risk comes liability. If an outbreak occurred on campus, could the administration be on the hook for lawsuits?

Still, very few colleges are publicly admitting other options. Cal State Fullerton announced Monday that it was assuming it would be virtual in the fall. "Of course that could change," said the school's provost, Pamella Oliver, in a virtual town hall, "but at this point that's what we're thinking." Boston University shared that it was making plans in the event it couldn't reopen come fall, and the story gained worldwide attention. The school has since backpedaled and clarified, announcing that "Boston University is planning to resume its on-campus, residential program in the fall of 2020, following the recommended best health practices around the coronavirus pandemic."

In an environment with declining enrollments, says Alexander, schools are competitive. If one school announces plans to remain online, another might flaunt its gorgeous campus in an attempt to steal away students. Every student who agrees to enroll matters in this environment, he says, and higher ed isn't big on working collaboratively.

Planning in the background, without making any public declarations, seems to be the winning play right now.

"I think we're still 50/50 on whether the fall semester looks normal," says W. Joseph King, the president of Lyon College, a small private school in Arkansas. There, he says, his administration is currently planning two, very different options: the typical residential experience they've always had, or a totally virtual one. Regardless of what happens, there's really no scenario, King says, where it doesn't hurt financially. "We're not in a situation where we've been running a surplus," he says. The college has long struggled with its endowment and enrollment, but this spring, he says, was actually shaping up to be pretty good: The number of students who have committed and sent in deposits is higher than expected.

"But the question is, do those deposits, those intentions that we've heard so far, ring true to a final decision?" he says, So much can happen over the summer, especially given how much economic uncertainty and disruption families are facing. Will students actually be there in the fall? That's the question every college in America is wondering right now.