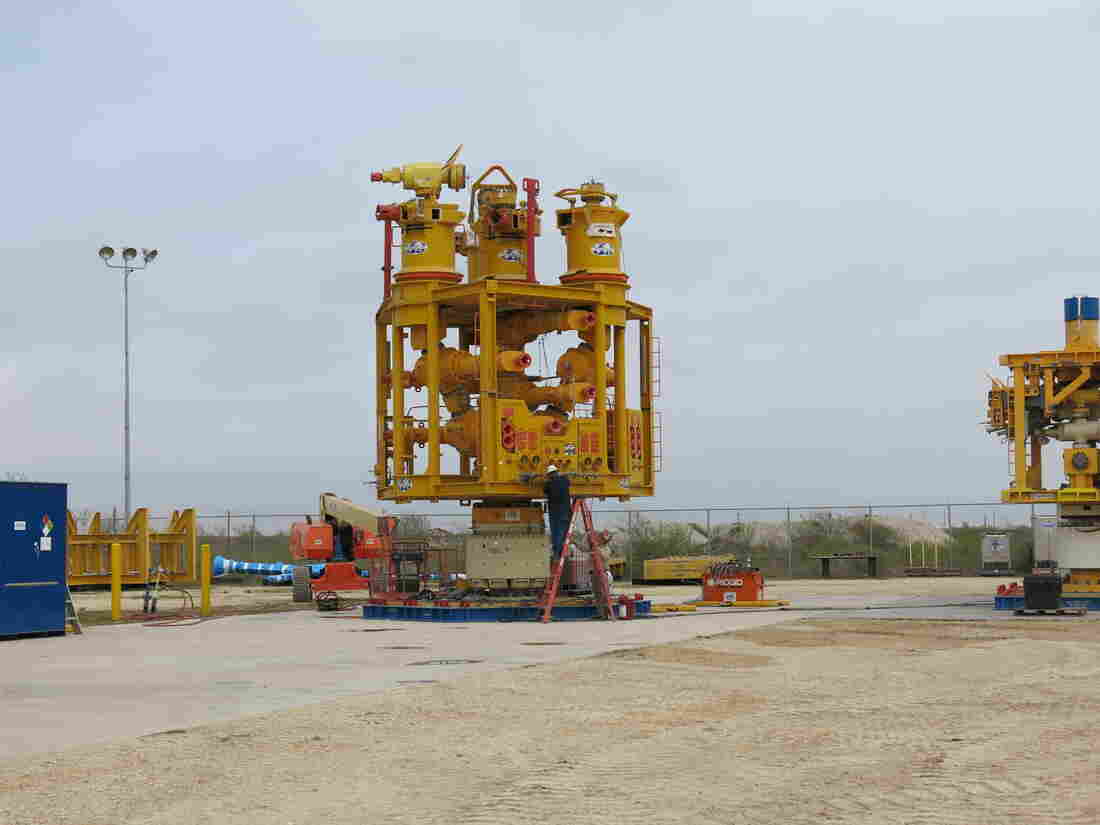 After the Deepwater Horizon accident a capping stack like this one had to be built to stop the flow of oil. Now, five of them are on standby in Corpus Christi, Texas, and could be deployed in about a week. Jeff Brady/NPR hide caption 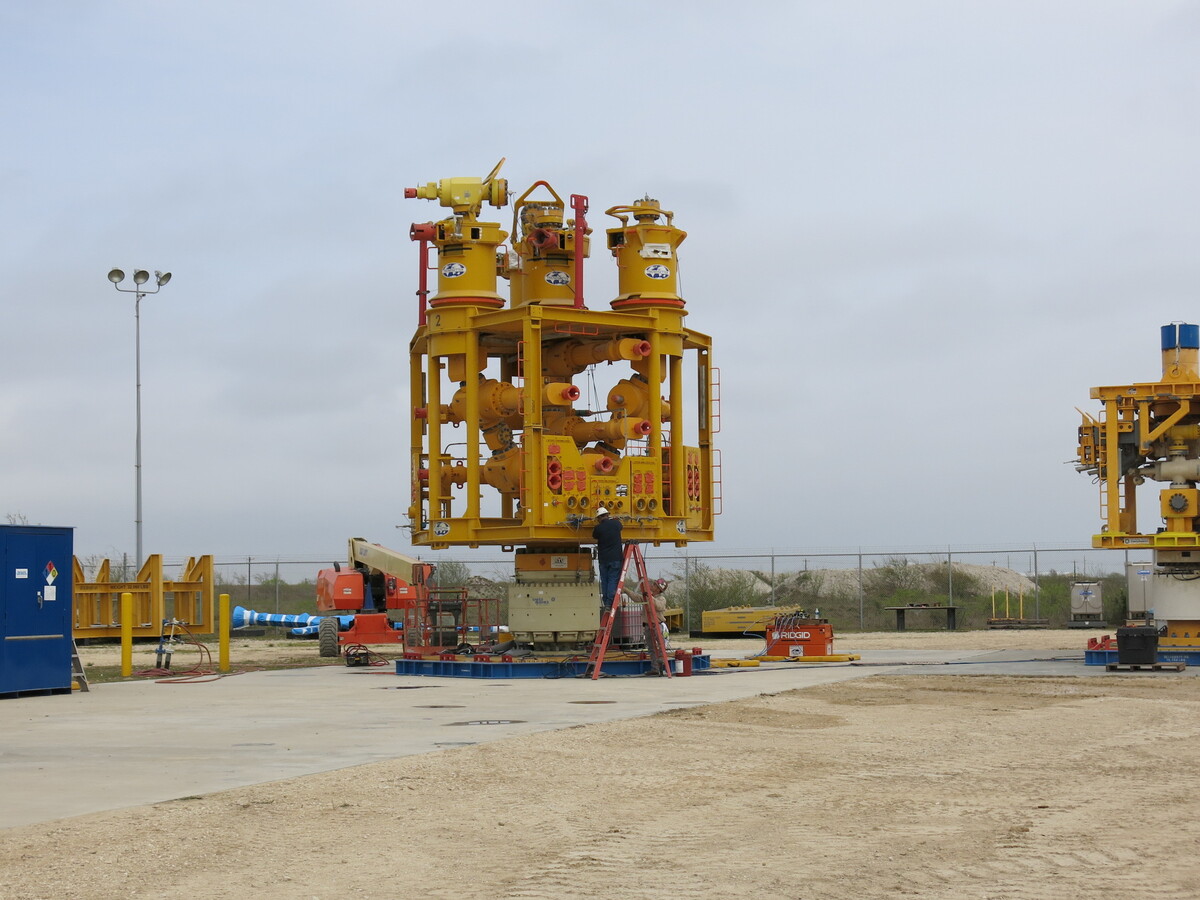 After the Deepwater Horizon accident a capping stack like this one had to be built to stop the flow of oil. Now, five of them are on standby in Corpus Christi, Texas, and could be deployed in about a week.

On April 20, 2010, while drilling oil giant BP's Macondo well in the Gulf of Mexico, the crew lost control of the well. There was a "blowout" that released gas and oil, leading to an explosion that killed 11 workers.

The Deepwater Horizon rig was destroyed and sank two days later. Over the next nearly three months, 210 million gallons of oil flowed from the well into the Gulf.

It was one of the biggest environmental disasters in U.S. history.

Ten years later, the offshore drilling industry says it's better prepared to respond to a similar event. But critics still want stronger regulation to decrease the risk of such an accident happening again.

In 2010, some of the equipment needed to stop the flow of oil — including the capping stack that eventually accomplished that — had to be built from scratch.

Today, the oil industry has that equipment standing by, waiting for an emergency. Regulators require this before a company can drill.

While oil was still flowing in the Gulf back in 2010, four companies put up $1 billion to create MWCC. Six more have joined since then, and hundreds of millions of dollars have been spent on equipment and training workers.

'Where The Land Used To Be,' Photos Show Louisiana Coast 10 Years After BP Oil Spill

At MWCC's facility near Corpus Christi, Texas, there are five capping stacks sitting in a gravel yard. They are about two stories tall and the heaviest weighs as much as 40 full-sized SUVs. Each is intended for different uses, ocean depths, pressures and temperatures.

"When they give us the word 'go,' we can get offshore with a capping stack [and] hopefully get the well capped off within the matter of a week," says MWCC CEO David Nickerson. That's about 10 times faster than it took to shut off flow during the Deepwater Horizon accident.

If crews can't stop the oil right away, MWCC has a fleet of equipment designed to capture it, put it in tankers and bring it on shore until a relief well can be drilled to stop the flow.

"Ten years ago absolutely none of this existed. All of this has been built directly in response to the Deepwater Horizon incident," says Nickerson. 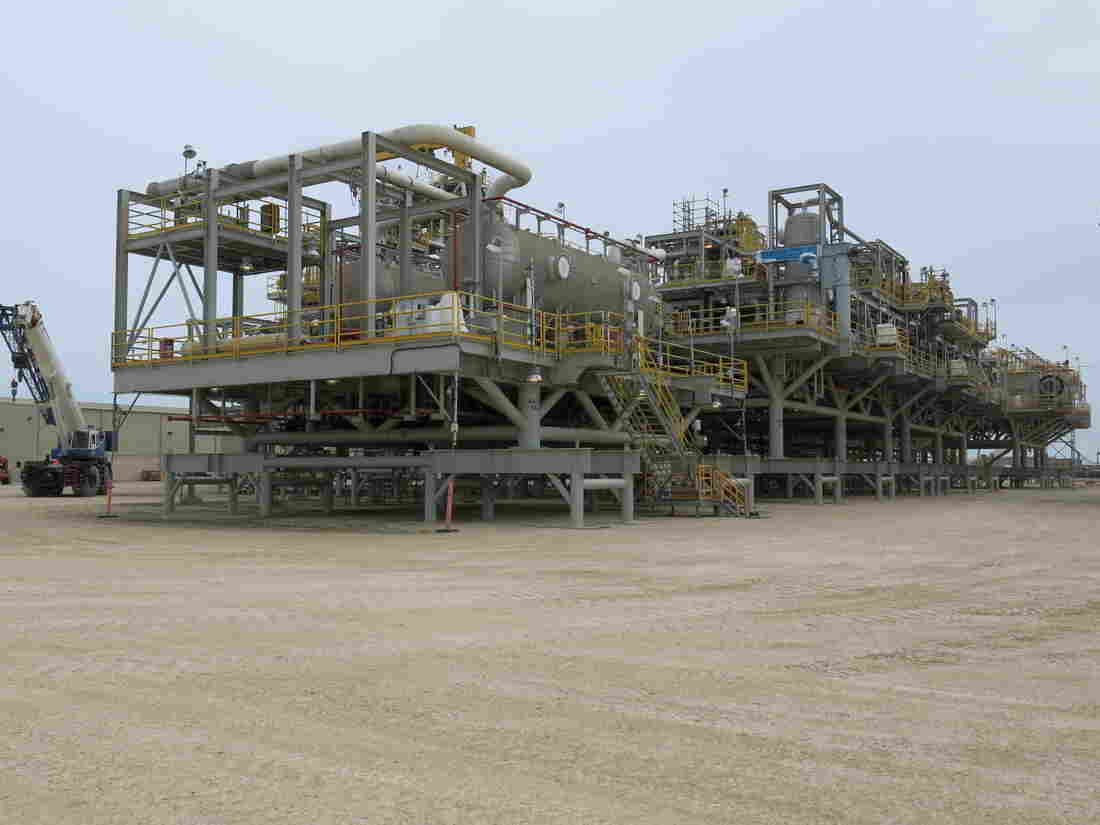 If it's not possible to stop oil from a well blowout right away, MWCC has two production modules on stand-by. Once mounted on ships, they can process up to 100,000 barrels of oil a day for up to six months so it can be brought onshore by tankers. Jeff Brady/NPR hide caption 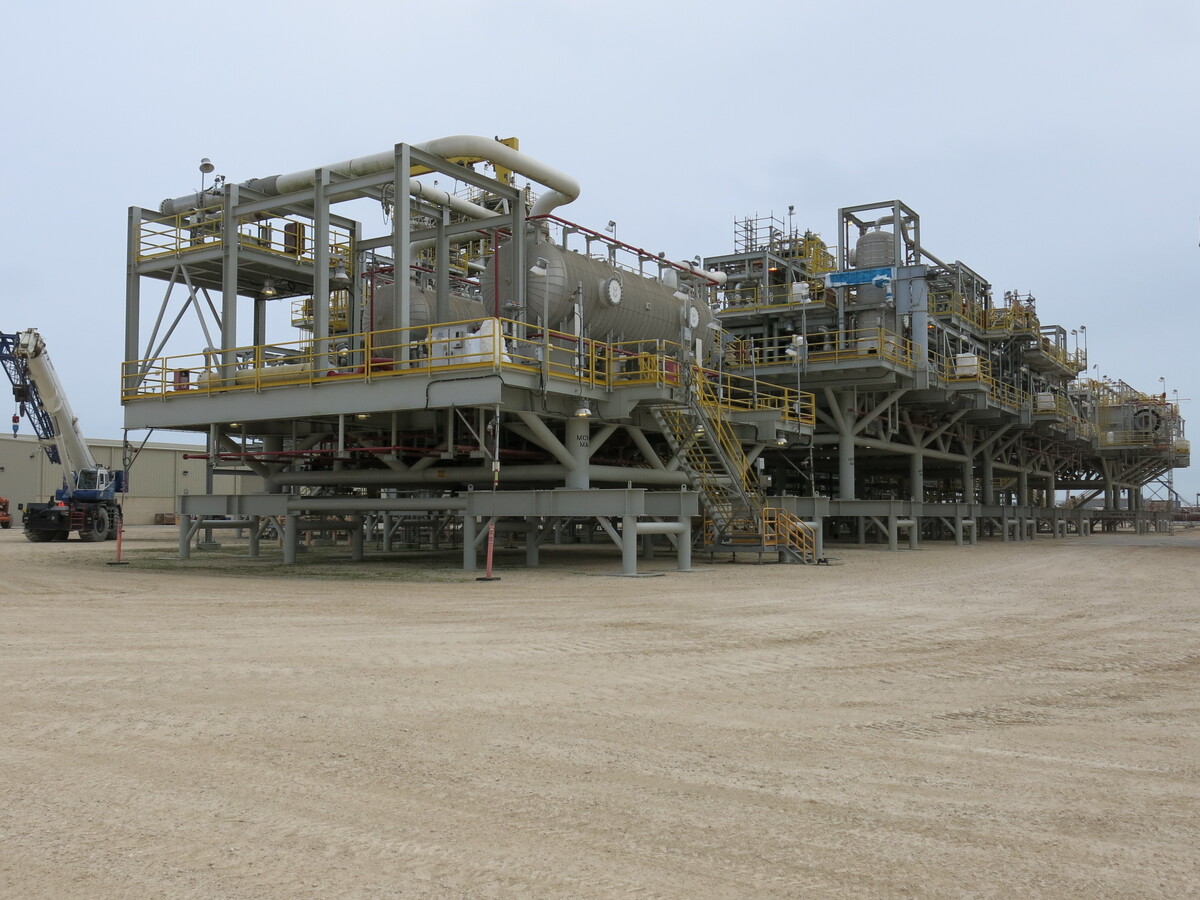 If it's not possible to stop oil from a well blowout right away, MWCC has two production modules on stand-by. Once mounted on ships, they can process up to 100,000 barrels of oil a day for up to six months so it can be brought onshore by tankers.

Changes also have been made to prevent such an accident from happening, including stricter regulations. An entire new agency was created called the Bureau of Safety and Environmental Enforcement (BSEE).

Last month BSEE Director Scott Angelle offered members of Congress a positive view of what the bureau has accomplished.

But before Angelle was a regulator of the offshore oil and gas industry, he was a cheerleader for it.

As Louisiana's lieutenant governor in 2010, he spoke at a rally praising the oil industry. Remarking on the renewable energy business, he told a cheering crowd, "America is not ready to get all of its fuel from the birds and the bees and the flowers and the trees!"

Among environmental groups, and those who want the U.S. to transition to cleaner energy more quickly, there is a lot of criticism of Angelle, who was appointed by then-Interior Secretary Ryan Zinke in 2017.

There is no risk-free way to extract fossil fuels from the earth.

"We've seen the Trump administration rolling back some of the far too few safeguards that were put in place as a response to the BP Deepwater Horizon," says Diane Hoskins, offshore drilling campaign director at the nonprofit Oceana.

Hoskins points specifically to something called the Well Control Rule, a complex collection of regulations designed to prevent future blowouts. It gives drillers detailed requirements they must follow to safely drill an offshore well.

"We really see those changes as a modernization of the regulatory requirements," says Debra Phillips, senior vice president at the American Petroleum Institute.

Phillips says much of the original rule was left in place. She says other parts of it were overly prescriptive and didn't take into account that individual deep water wells can have very different characteristics. She says the rule changes give drillers more flexibility.

"You've got opportunities to customize your technology based on the realities of the drilling situation which, at the end of the day, can actually make the site safer," says Phillips.

"When they drill, they spill"

A lot of the regulatory changes were made in consultation with industry groups, such as API. That alone generates skepticism among critics, especially now that President Trump has expanded the areas available for offshore drilling.

"We know that when they drill, they spill," says Hoskins. Her group opposes expanding offshore drilling to new areas.

It's worth noting that in the past decade there hasn't been another major offshore spill in the U.S. like the Deepwater Horizon. In fact, the two companies standing by to cap a well blowout have never even deployed their billions of dollars' worth of equipment for anything other than drills.

And not all offshore drilling accidents are the same. A 2004 spill happened when Hurricane Ivan toppled a rig in the Gulf of Mexico and underground wells were buried in a mudslide. It took 14 years to contain that leak.

"I've gotten the question over the years, 'Is it safe to drill?'" says retired Coast Guard Admiral Thad Allen, who was the national incident commander for the Deepwater Horizon oil spill response. "My answer is that's not the question, because there is no risk-free way to extract fossil fuels from the earth."

He says the question is whether the value of the resource is worth the risk of another disaster.

Allen says offshore drilling is safer now than it was 10 years ago. But he says we won't know if regulators and the industry are adequately prepared until the next accident happens.