Accessibility links
This Charmin Toilet Paper Factory Keeps Humming Amid Lockdown Although millions of Americans are out of work or working from home, many are still working at factories nationwide. They have some lessons on what it will take to "reopen" the country safely. 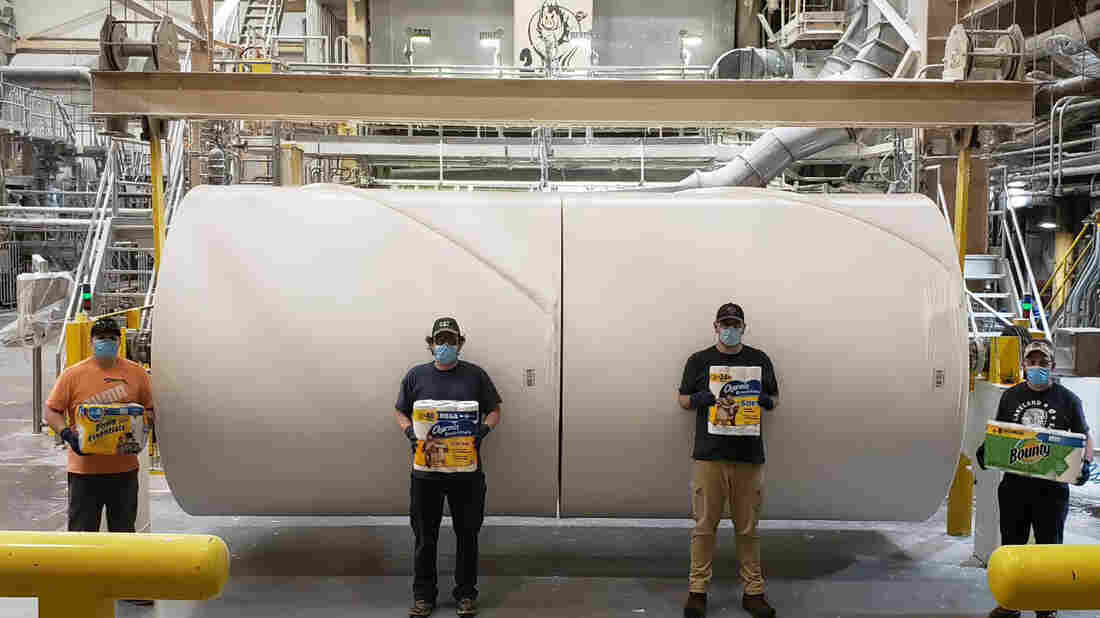 The Procter & Gamble plant in Mehoopany, Pa., has been running nonstop during the pandemic, making essential products such as toilet paper, paper towels and disposable diapers. Courtesy of Procter & Gamble hide caption 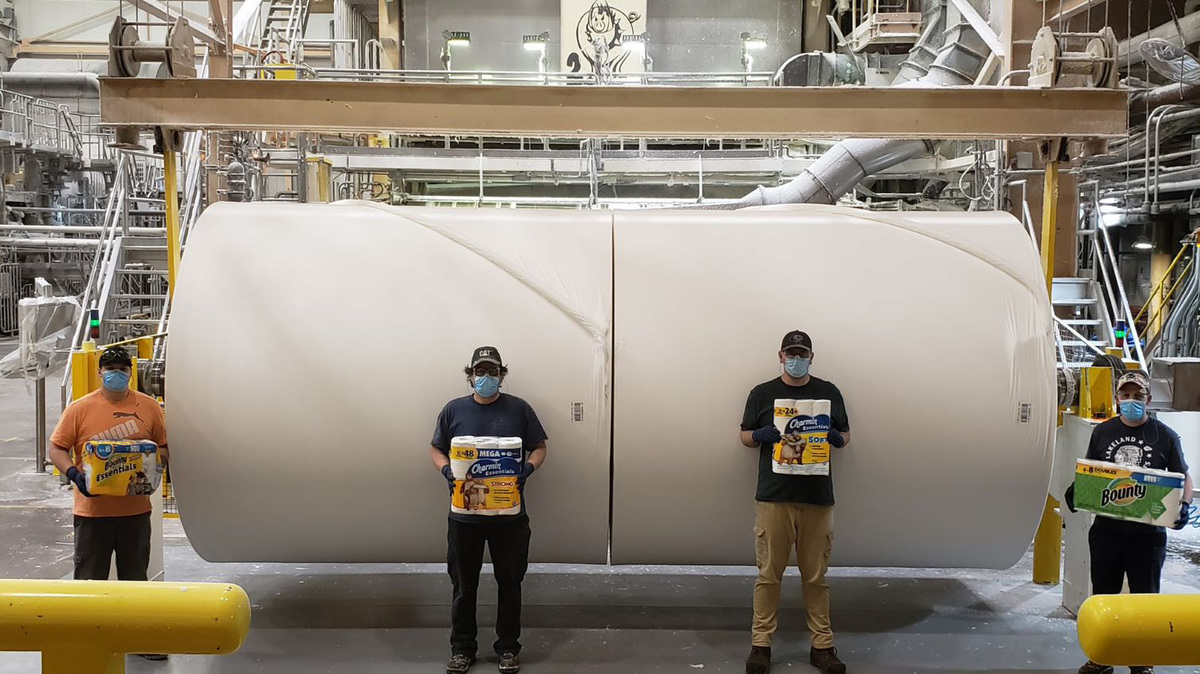 The Procter & Gamble plant in Mehoopany, Pa., has been running nonstop during the pandemic, making essential products such as toilet paper, paper towels and disposable diapers.

While the president and his advisers talk about "reopening" the economy, there are parts of it that never closed.

Many factories are still operating around the clock, churning out the products we depend on during this pandemic, including food, face masks and toilet paper.

"I get a lot of ribbing locally in my neighborhood," says Jose de los Rios, who works at a giant Procter & Gamble plant in Mehoopany, Pa., where Charmin toilet paper is produced. "At least a third or half of my neighbors stop me and jokingly ask, 'Can I get them some?' " 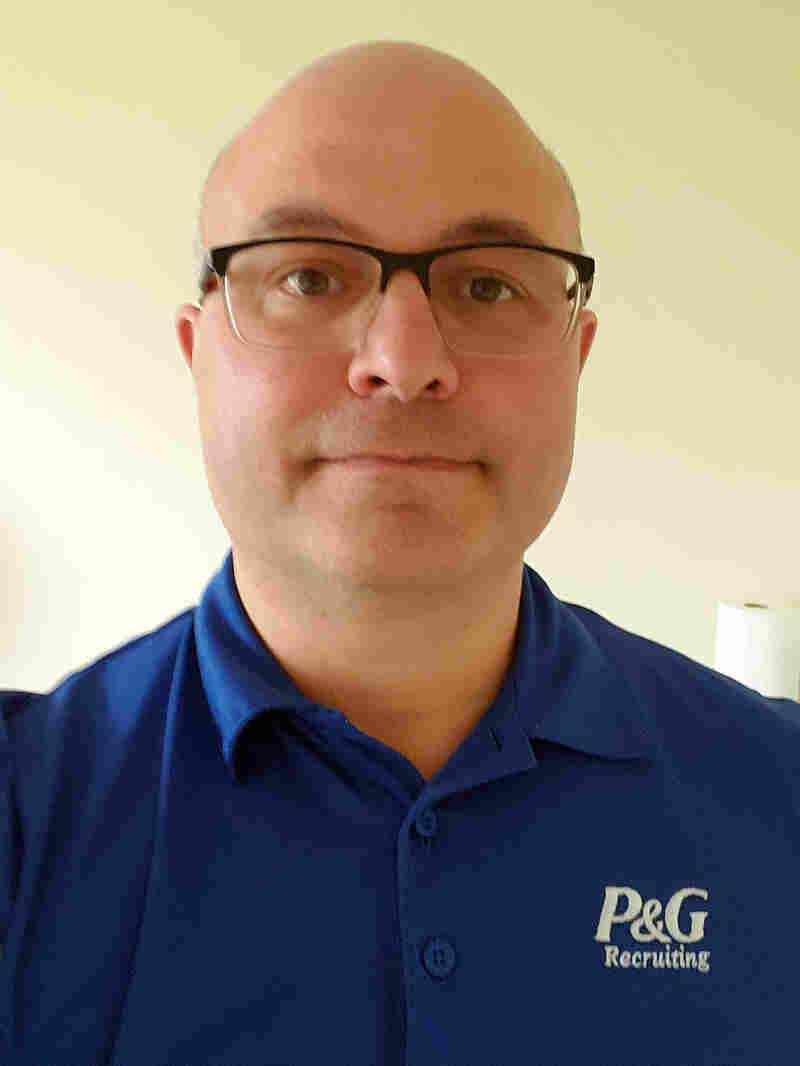 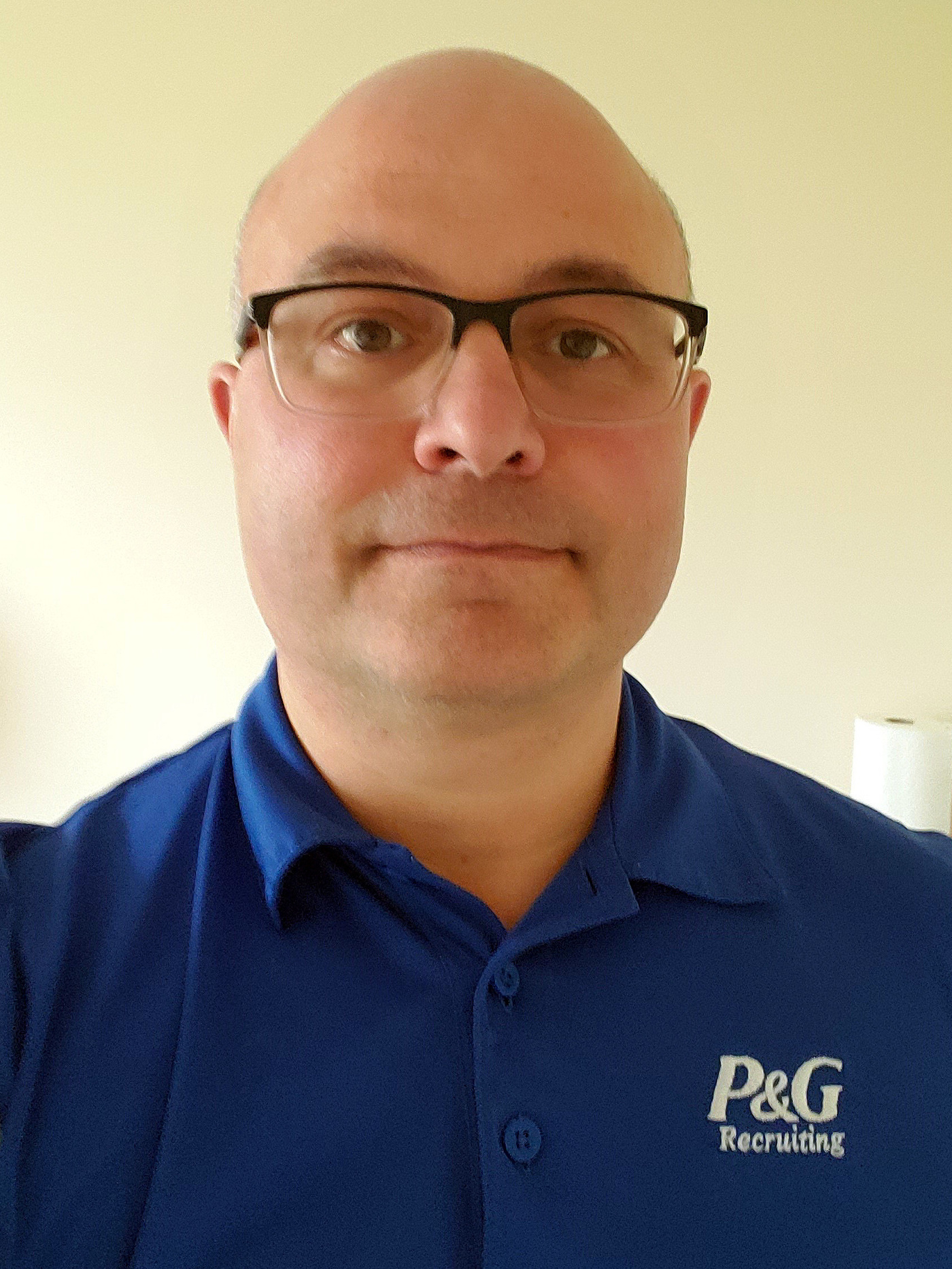 In recent week there's been a squeeze on Charmin and other brands of toilet paper. De los Rios and his colleagues are making as much as they can, running the plant 24 hours a day, while also taking steps to protect the health of the 2,200 people who work there.

Must-run factories offer some lessons for other businesses about what it will take to re-open, while also keeping workers safe.

"This particular virus is one that we're all trying to figure out," says Jay Timmons, president of the National Association of Manufacturers. "What will the new world actually look like after we make the decision to open up society again?"

At the Charmin factory, shift changes have been stretched out over three hours, to keep workers separated at the plant door. Employees have their temperature taken on the way in. And instead of roaming freely throughout the mile-long plant, workers are compartmentalized, with color-coded badges.

"Every individual got assigned a zone that were allowed to operate in," de los Rios says. "It reduces the likelihood of spread of any illness across the plant."

In the beginning, he says, it was disruptive and awkward trying to talk to coworkers while staying six feet apart. But workers have adjusted.

A General Mills plant in Wellston, Ohio, has adopted similar precautions, issuing face masks to workers and erecting a tent in the parking lot, so employees can maintain "social distance" during their breaks. That's allowed the plant to keep running at full capacity, making frozen pizza and pizza rolls.

"We have seen a lot of feedback from our consumers that the Totino's product line is getting them through quarantine," says plant manager Carolyn Mendel. 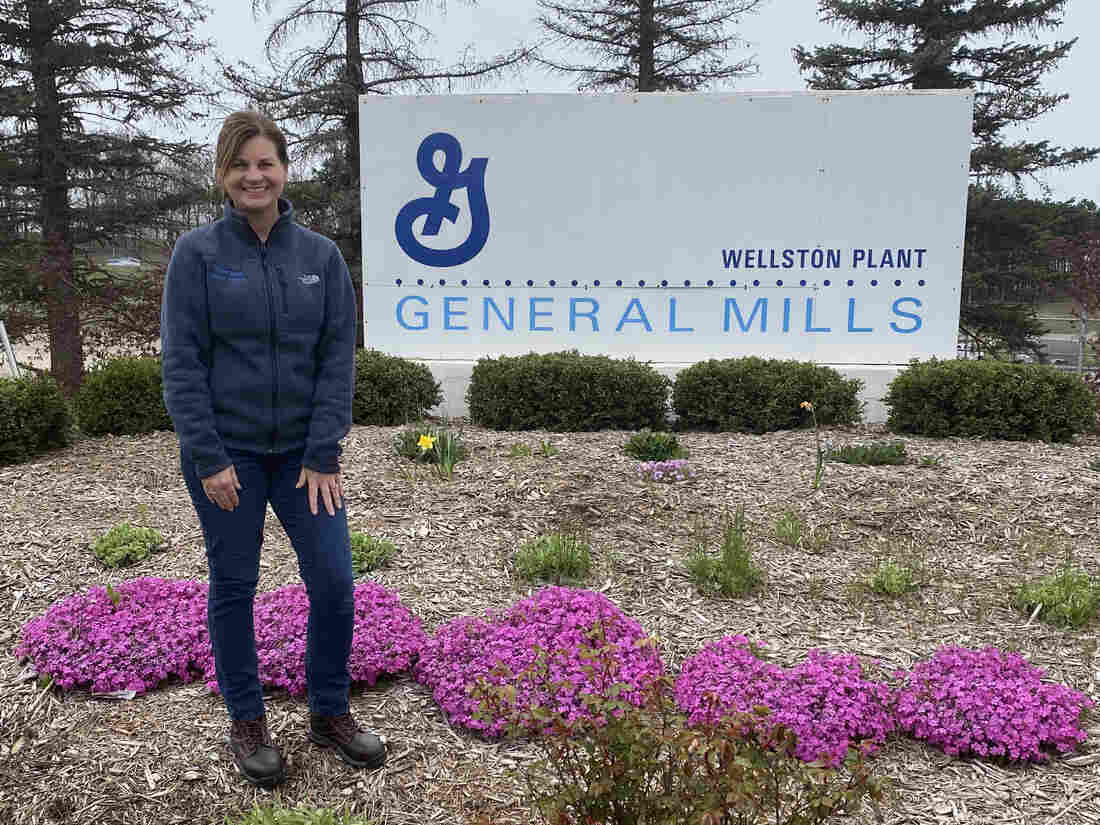 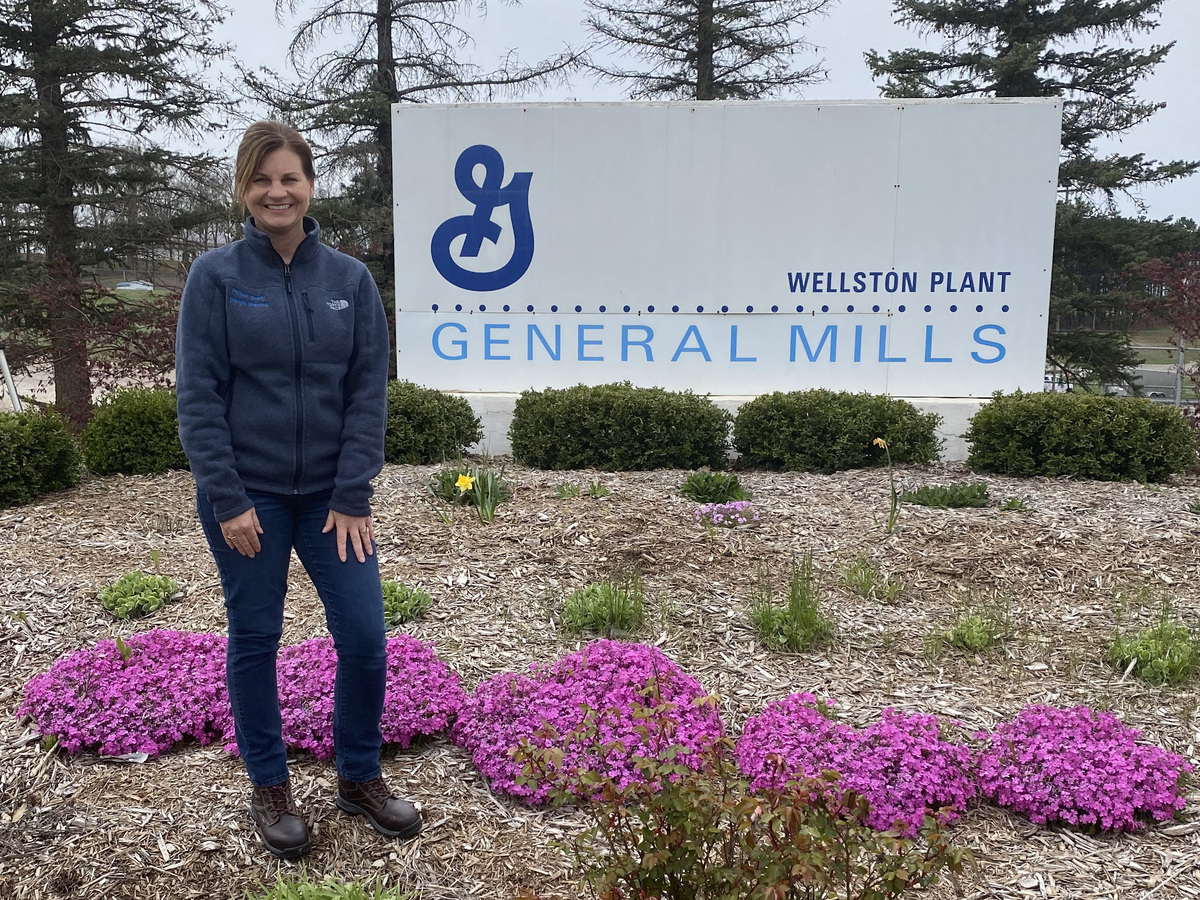 Carolyn Mendel, a General Mills plant manager in Wellston, Ohio, says she has compared notes on workplace safety with a rival frozen food maker nearby.

Like grocery clerks and delivery drivers, these factory workers are considered essential employees. And while many have their own concerns about the coronavirus, the pandemic has shined a spotlight on work that might have been invisible or taken for granted in the past.

"It's created a degree of pride. It's created a degree of passion," says Geoff Freeman, president of the Consumer Brands Association, a trade group for grocery manufacturers. "We couldn't be more proud of the people who are going to work every day to produce these products, to ensure that shelves across the country remain as full as absolutely possible."

Many manufacturers have streamlined their plants, reducing variety in some cases to maximize production of their most popular items. In addition, Freeman says food company executives are talking weekly with grocery store owners about how to keep products flowing most efficiently.

"There's comfort when mom goes to the grocery store and can find food on the shelves," Mendel says. "And we talk about how stressful it is when those shelves are empty."

"We talk openly back and forth about things that are working in our site," Mendel says.

So far, the safety measures appear to be working. There have been no confirmed cases of coronavirus at Mendel's plant or de los Rios's, although some workers from both facilities have been quarantined as a precaution.

Not every factory owner has been so careful. At least a dozen meatpacking plants around the country have been forced to close or restrict operations because of COVID-19 outbreaks among their workers. Critics say the government hasn't done enough to police those plants, where workers typically stand shoulder to shoulder on the cutting line.

"In the meat and poultry industry, they have historically not made a priority of worker safety," said Deborah Berkowitz, a former Occupational Safety and Health Administration official who is now with the National Employment Law Project. "These workers are often very hidden. The plants are often in more rural, remote areas. Therefore people don't see the sort of sacrifices they're making."

Berkowitz says it's possible for factory managers to keep products flowing while also safeguarding workers, with some simple precautions.

"Not rocket science, but it would change the way they do business," she says.

Mendel says the pandemic has underscored the importance of worker safety, and employees have responded.

"They feel like they're serving the country by coming into the plant and grinding out those pizzas and pizza rolls," she says.