Accessibility links
Airlines Offer Vouchers, Credits For Canceled Flights. Customers Want Cash A new survey suggests nearly 60 million Americans are losing money because of canceled plans. And would-be travelers are getting the runaround, even when they are legally entitled to a full refund. 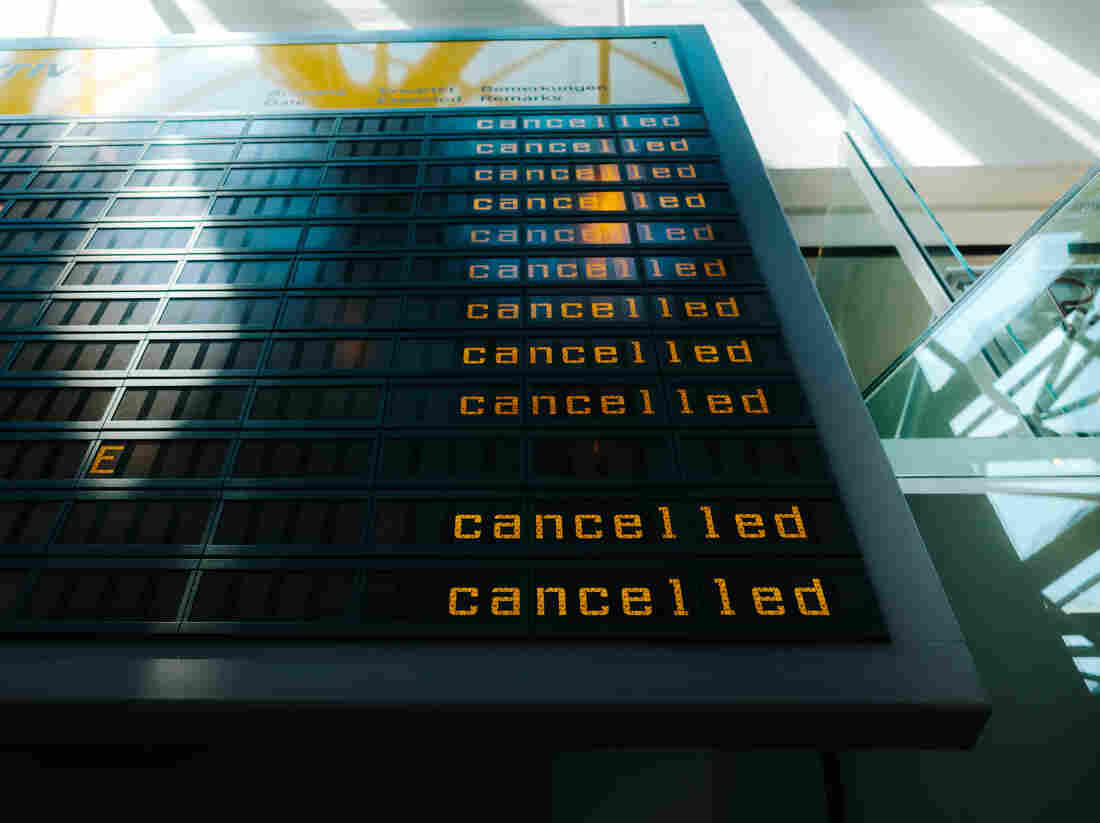 When airlines cancel flights and offer no other options to get to your destination within a reasonable amount of time, they are legally obligated to offer a refund. Kay Fochtmann/Getty Images/EyeEm hide caption 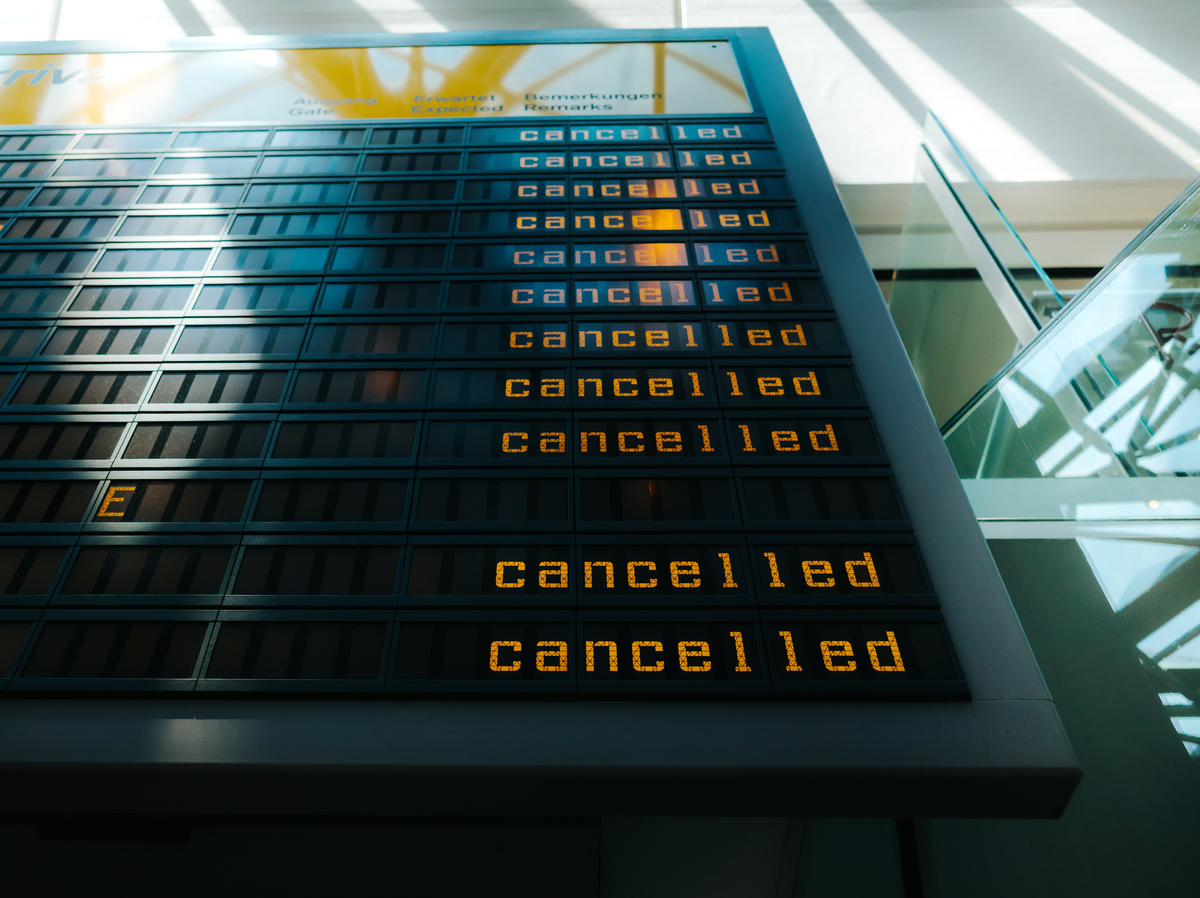 When airlines cancel flights and offer no other options to get to your destination within a reasonable amount of time, they are legally obligated to offer a refund.

In the midst of Chicago's brutal January cold and knowing that March brings its own kind of misery to the Midwest, Mary Fabianski made plans to spend a week in early spring on Florida's beaches with family.

She booked a flight to Sarasota on United Airlines for $488 round trip on Jan. 22, before the pandemic started affecting travel in the U.S. But as it got closer to her March 29 travel date, Fabianski suspected the trip might not happen. Still, she didn't cancel her plans right away.

United did that for her on March 26.

"I got a text alert on my phone at 1:23 in the afternoon, just saying they were sorry to let me know my flight to Sarasota was canceled, due to unprecedented circumstances," Fabianski says.

When an airline cancels a flight and offers no other options to get to your destination within a reasonable amount of time (which United defines as within six hours of your original scheduled arrival time), it is legally obligated to offer a refund. But just because they're obligated doesn't mean the airlines make it easy, as Fabianski discovered.

A new survey suggests nearly 60 million Americans are losing money because they can't get refunds for canceled flights and other travel plans.

A few hours after receiving the notice that her flight was canceled, Fabianski logged on to United's website to explore her options.

"And it was confusing to say the least and I thought the only option I could do was I could cancel my trip," which Fabianski says didn't make any sense because the flight was already canceled. A refund was not one of the options United presented.

So she called. At first, she was told she can't get a refund because she canceled her trip, even though United had.

Then she was told how to go back online and request a refund, which she did. A few days later, she says she got an email back "saying that my refund request had been denied because my ticket was nonrefundable."

United told her that she could get a voucher for future travel and that it would waive the change fee, which most airlines are doing right now.

But Fabianski felt that still wasn't right, so she called again and again, spending hours going back and forth with the airline.

The retired English teacher took meticulous notes about every conversation. She even mentioned U.S. Department of Transportation regulations requiring airlines to refund even nonrefundable airfares when they cancel flights, regardless of the reason.

Eventually Fabianski was told she can get a refund but not until next year, if she doesn't use her travel voucher by then.

"I was so frustrated," she says. "I somehow feel they're being, what's the right word? Disingenuous."

This is especially because taxpayers like her are now coming to the airlines' rescue. United is getting $5 billion in federal aid to help cover payroll for the next six months, and it says it will likely request another $4.5 billion in government loans.

"I don't have a problem with that, but what is United doing to compensate me for my loss?" Fabianski asks.

"It makes me mad because they're asking for the same thing that I'm asking for," she adds. "It frosts my cake, it really does."

A spokeswoman for United Airlines says that it appears Fabianski is correct and that she has now been given a refund for her canceled flight.

But it's a much different story if you cancel your trip. Then the airline is under no obligation to offer a refund. Each airline's policies differ, but they usually will only offer credits or vouchers for future travel.

Most airlines are now waiving hefty change and cancellation fees, and some, including United, will now give you up to two years to use travel vouchers or credits.

If you still want a refund, having travel insurance may not help. Only "cancel for any reason" insurance will get you a refund, and even then, it may not cover the full amount and you may wait months for reimbursement.

Complaints about denied refunds filed with the U.S. Department of Transportation, with state attorneys general and with consumer groups are skyrocketing, with some would-be travelers filing lawsuits against airlines over their refusal to give refunds.

It frosts my cake, it really does.

"We found that a lot of people have lost money, unfortunately," says Ted Rossman, an analyst at Bankrate.com, which just published a study on coronavirus-related refunds. "Only 30% of people who experienced canceled trips or other events due to the coronavirus have gotten all their money back."

That leaves 70% of consumers — or 59 million — only getting partial refunds, credits or nothing at all for canceled flights, hotel stays, vacation rentals, concert tickets and other plans.

Rossman suggests waiting as long as possible before canceling to see whether the airline cancels first. If there's a dispute, he says, take it up with whomever you purchased from, whether that be the airlines itself or a third-party site like Expedia or Orbitz. Booking with a travel agent can help as they can advocate for you and have experience doing so. Some consumers have resorted to disputing the airline's charges with their credit card companies, with mixed results.

The reason airlines in particular are trying to persuade customers to take credits or vouchers instead of refunds is simple — they're running out of money, says DePaul University aviation expert Joe Schwieterman.

"They have to watch every last dollar," Schwieterman says, noting that airlines are losing millions of dollars every day. "They're, you know, just trying to just to keep some semblance of a system operating, so they're reluctant to make it too easy for travelers to grab that refund."

Schwieterman says giving customers a travel credit or voucher "keeps the money in their coffers, and if there's ever a time the airlines need some liquidity and need some cash, it's right now because it's a very scary situation."

United, for example, reported Monday losing $2.1 billion in the first quarter this year (compared with a $300 million first-quarter profit last year). The airline was losing $100 million a day the last two weeks of March and expects to fly fewer passengers in all of May than it carried on one day last May.

The industry group Airlines for America says U.S. airlines have parked more than 2,700 of their aircraft. That's 44% of the nation's commercial airline fleet. The group says the few planes that are flying are nearly empty, averaging just 10 passengers on domestic flights and 24 passengers on international flights

But a lot of people who had travel plans may be facing their own cash crisis right now, so a refund for a trip they cannot take is critical for them.