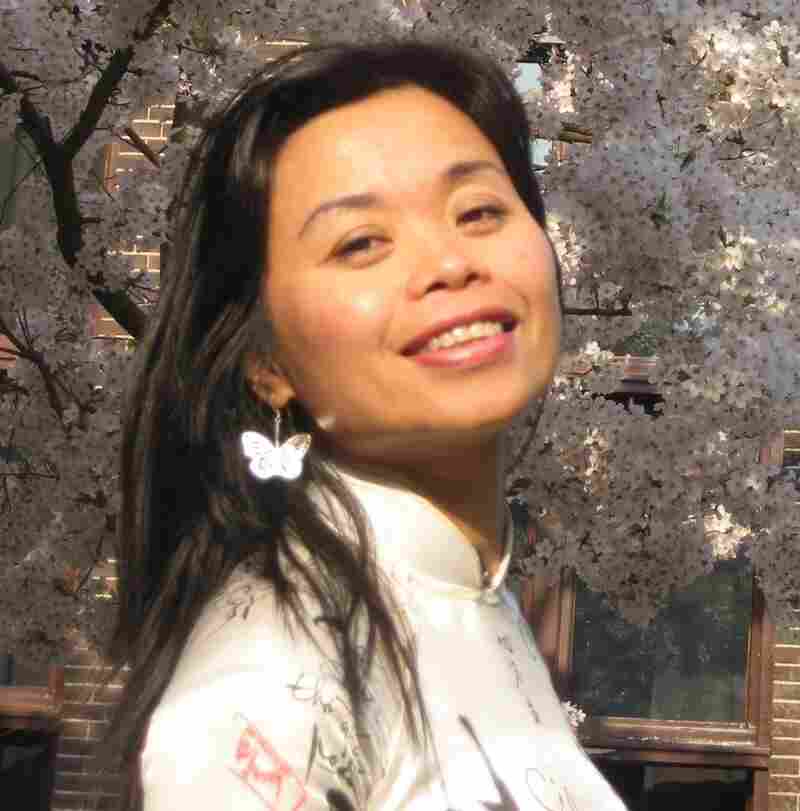 Ngyuen Phan Que Mai grew up amid the devastation of the Vietnam War. She worked as a street vendor before going to college in Australia and becoming a writer. Vu Thi Van Anh hide caption 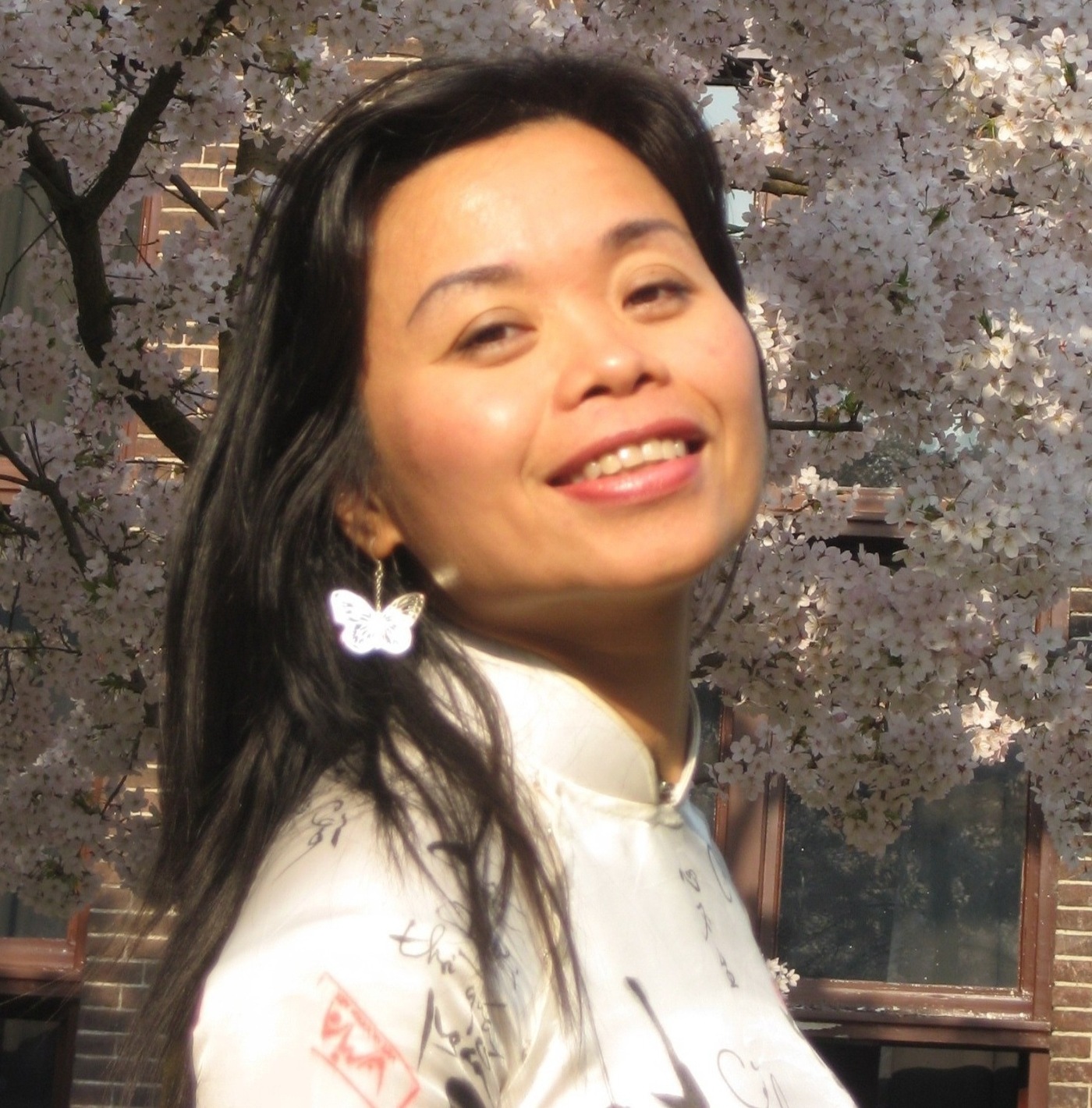 Ngyuen Phan Que Mai grew up amid the devastation of the Vietnam War. She worked as a street vendor before going to college in Australia and becoming a writer.

Author Nguyen Phan Que Mai is a poet and world traveler whose first novel, The Mountains Sing, is about four generations of a Vietnamese family enduring many hardships — something she understands well.

The 47-year-old writer was born in North Vietnam, but grew up in a small village in the South, destitute, hungry and horrified by the ruins of war. "As a child, I saw so many people with missing limbs," she recalls. "I saw mothers without children, people committing suicide because their loved ones didn't come back."

Those images stayed with her as she wrote The Mountains Sing, which centers on a grandmother and granddaughter. She also modeled one character on her uncle, who fought against the Americans in the 1960s and '70s.

"He came back from the war devastated, such a miserable man," she says. "And the thing about this book is that it gives voice to trauma and PTSD in Vietnam."

Que Mai says as research, she interviewed other war veterans. And though her grandparents died before she was born, she wove their family lore into her novel.

"I took the story of my father's mother, who died in the great hunger of 1945," she says. "It's a catastrophe as a result of World War II, where two million Vietnamese people died. It was horrible, and my grandma died, together with her youngest son and her brother."

The total number of deaths in that famine has never been confirmed, as the history is still being written. After the famine of the 1940s, Que Mai also fictionalizes the Viet Minh government's brutal land reform of the 1950s, when her grandfather was beaten, put in prison and died "because of the policy of the Viet Minh at that time, to punish the landowners."

The Vietnamese famine and land reform policies are historical events rarely recorded in fiction, says Viet Thanh Nguyen. The Pulitzer Prize-winning author of the 2015 novel The Sympathizer says he was so impressed by the manuscript of The Mountains Sing that he sent it to his agent to get it published. 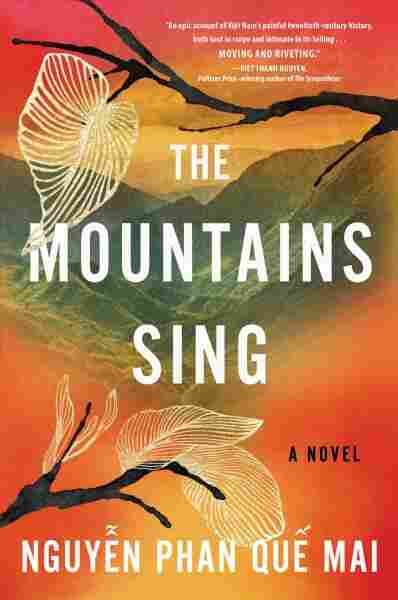 "It is in some ways, I would say, the Vietnamese version of The Grapes of Wrath," says Viet Nguyen, "because it's describing this this time period in Vietnamese history that's deeply traumatic, and yet also poorly understood, and in many ways is a time period that completely contradicted how the North Vietnamese and the Communist Party saw themselves."

Viet Nguyen says writings about these traumas have long been discouraged, even censored. He says the fact that Que Mai wrote The Mountains Sing in English, her second language, ensures the novel has a global reach.

"It's a really crucial novel in terms of the history that it deals with, but also in her way of looking at normal people who are just subjected to completely unexpected catastrophe," he says, "in a similar way to what we as Americans and the rest of the world [are] undergoing with this pandemic. It's a real test of character that she shows."

Viet Nguyen says he's also moved by Que Mai's poetry and her own life story. As she tells it, while her family was poor, her mother nourished her with borrowed books and lullabies: "The lack of food she made up with songs out of Vietnamese poetry."

Before school in the mornings, she worked in rice fields and caught shrimp to sell to neighbors. On the village streets, she sold cigarettes and curtains and handicrafts she made out of bamboo. "At that time, Vietnam was under the American embargo. So life was extremely difficult," she says. "We hardly had enough to eat. So everybody had to work hard."

Que Mai describes herself as a well-behaved girl who loved reading books by the American writer Laura Ingalls Wilder. She kept a diary, and when she was 10, won a writing contest. She learned English in the eighth grade, and won a prestigious scholarship to study business management at an Australian university.

I could only write 'The Mountains Sing' having lived through difficult times. Only through experiencing by myself the challenges faced by the poorest of the poor, the most desperate, could I have that empathy.

"Here goes the Vietnamese saying 'good luck hides inside bad luck,' because I was so desperate. I studied day and night, and I came out as the top student."

Que Mai says after college, she got a marketing job in Australia, and then became one of the first investors in the Vietnamese stock market. She consulted for international organizations, including the U.N., earned her master's degree in creative writing, and began translating poetry before moving on to writing her own poetry and prose. She and her husband have traveled the world, living in Bangladesh, Hanoi, Manila, Belgium and Indonesia.

"Looking back," she says, "I'm grateful for the experiences. Because I could only write The Mountains Sing having lived through difficult times. Only through experiencing by myself the challenges faced by the poorest of the poor, the most desperate, could I have that empathy."

Nguyen Phan Que Mai and her husband, a diplomat, had to evacuate their home in Jakarta for the coronavirus pandemic. They're now in Munich with their 20-year-old daughter and 18-year-old son.

She's now finishing her second novel, about Amerasians in Vietnam, children of American military men. "During the war many of them were abandoned, and after the war, they were discriminated against. They suffered so much. Many of them are desperately searching for their parents," she says. "And there are American veterans who have been going back to Vietnam to search for the children they once rejected in the past. There is so much heartbreak out there."

This story was edited for radio by Nina Gregory and adapted for the Web by Mandalit del Barco and Petra Mayer.