Accessibility links
'The Peak Of This Mountain Is Like A Mirage': Pandemic Leaves Asylum Seekers Stranded The pandemic has "had a particularly heartbreaking impact on refugees — in the sense that it's cut off their ability to travel, and trapped them in precarious situations," says an immigration lawyer. 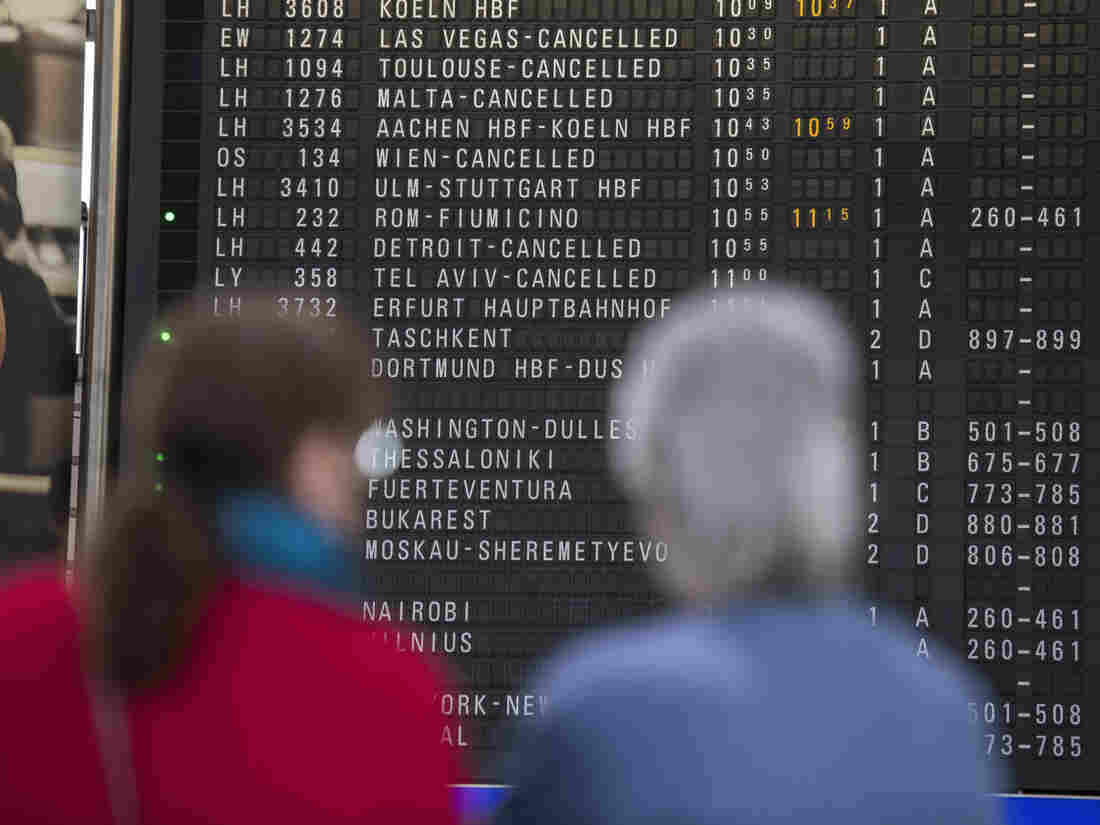 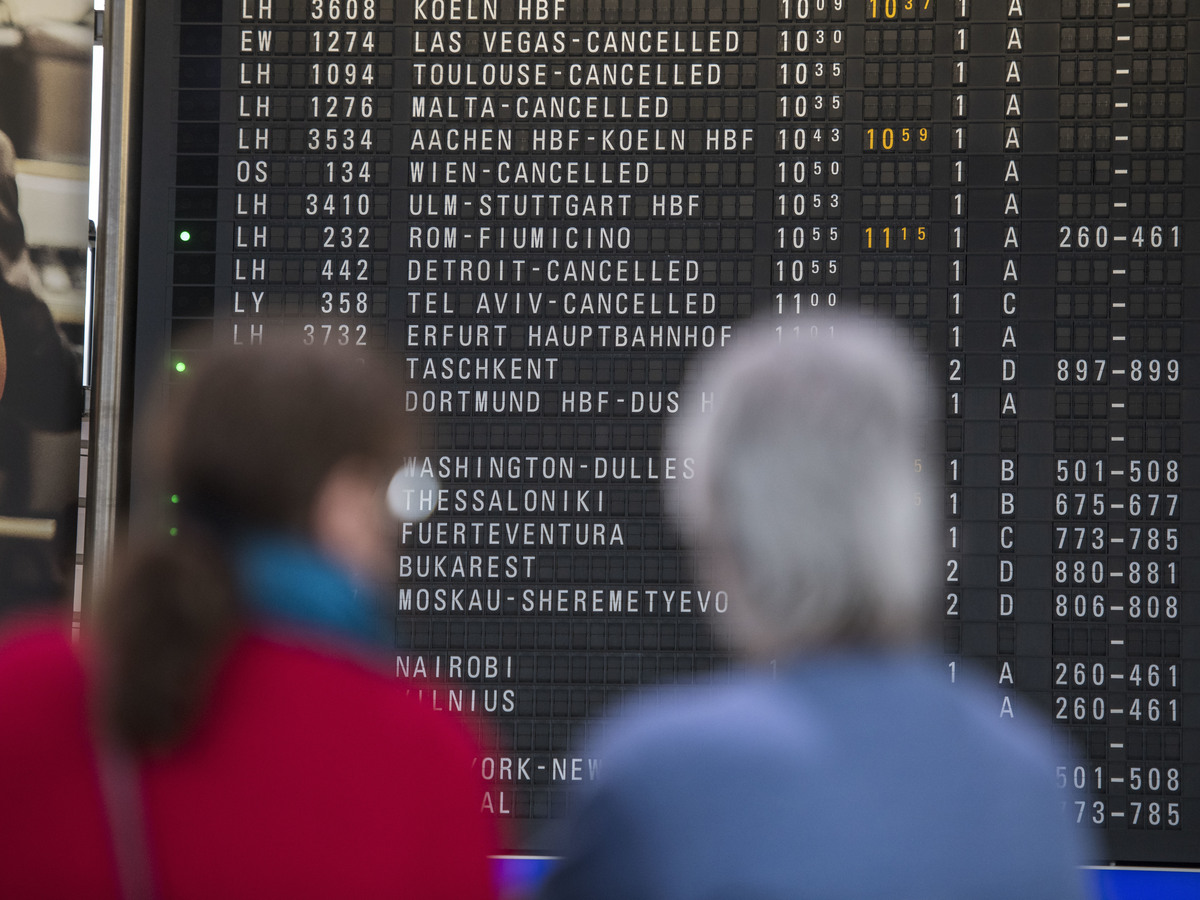 A destination board shows canceled flights at Frankfurt Airport in Germany last month. The coronavirus pandemic has disrupted travel plans for refugees who'd been granted asylum in various countries.

April 2020 was a month Mohammad had yearned for. It was when he was set to fly to the U.S. with his wife and son to start a new life.

The Afghan had spent years painstakingly proving he was eligible for a special visa through his work as an interpreter with the U.S. Marine Corps in Afghanistan, and that he posed no danger to the American homeland.

"It took almost five years," he says with a sigh, speaking by phone from Afghanistan. He asks that NPR not use his full name because of threats from the Taliban against him.

With the help of volunteer American lawyers, he navigated voluminous bureaucracy, gathering glowing testimony from the Marines for whom he worked in 2011, when he was still a teenager. He's now in his late 20s.

By November last year, the U.S. visa was finally in his passport. It was valid until April 15, 2020. The International Organization for Migration, which helps with resettlement costs, booked flights for Mohammad and his family for April 6.

"I was feeling very excited, I was very, very happy," he tells NPR. "We are really tired of war in Afghanistan."

Then, a few days before they were to leave, Mohammad received an email from the IOM telling him his flight had been canceled because of the coronavirus pandemic. And just like that, his long-anticipated plan evaporated.

As coronavirus fears swelled and the world's skies emptied of planes, resettlements were suspended and postponed, and Mohammad and other refugees around the world have found themselves stranded.

"We're heartbroken," says his lawyer, Brian Biglin, who works in cooperation with the International Refugee Assistance Project, based in New York City. The pandemic has, he says, "had a particularly heartbreaking impact on refugees — in the sense that it's cut off their ability to travel, and thus trapped them in precarious situations."

Cases like Mohammad's are especially disappointing for asylum applicants and their supporters because such opportunities are increasingly rare. While the number of people fleeing war zones has grown, the number being resettled permanently in safer countries has dwindled.

Starting in 2009, Afghans and Iraqis who worked with the U.S. were able to apply for the Special Immigrant Visa program, recognizing their work and the risk from militants who target people who help Americans. The program in Iraq ended in 2014. In Afghanistan, the number of SIVs granted annually fluctuates, after a steep drop two years ago.

Because of budget constraints, there would have been no new Afghan SIVs allocated for fiscal year 2019 had there not been a bipartisan push by U.S. senators. In the end, 2,347 SIVs were issued last year to Afghans, many of whom brought their families.

As of October, more than 8,000 SIV applicants were still waiting.

A State Department official tells NPR, "We are committed to supporting those who have helped U.S. military and other government personnel perform their duties," and that a replacement visa may be issued for people whose visas expire during the pandemic.

Ordinary refugees, ineligible for programs like the SIV, have less chance than ever of being resettled in the U.S., which has taken in fewer under President Trump. Between 2011 and 2015, the U.S. took in about 50,000 refugees a year. In the last fiscal year, after a steady decline, the number dropped to 21,159.

In Lebanon, which hosts nearly 2 million refugees, just 8,400 were resettled last year in third countries by the UNHCR. Now the COVID-19 pandemic is delaying new resettlements.

One Syrian refugee in Lebanon tells NPR that he, his wife and five children should have had coveted seats this spring on a flight to France, where they'd been granted asylum.

"There was urgency behind our request for asylum," he says. NPR is not using his name because he does not have residency in Lebanon and is vulnerable to deportation.

His wife has breast cancer, and getting treatment in Lebanon can be challenging for refugees. "France is supposed to be one of the best countries in terms of healthcare," he says.

He dreams of his children getting a proper education. "For every human in this life," he says, "children are the most important things. That their kids learn."

After Lebanon's airport closed several weeks ago as a measure against the coronavirus and the UNHCR told him his travel was postponed indefinitely, he felt deeply frustrated. "Someone comes to the end of the road and is surprised to find he's actually still at the beginning of the road," he says.

His application had taken a year and eight months. He had to call his relatives and ask them to lend back the furniture he'd given them as he packed up, and beg his landlord to extend his stay, although he was unsure if he could pay the rent.

"The peak of this mountain is like a mirage," he says. "You think you've gotten to the top and it's all a mirage."

The UNHCR said in a statement that the suspension of resettlement for refugees due to COVID-19 travel issues is temporary, and will remain in place only as long as is essential.

Meanwhile, Mohammad's situation in Afghanistan has become even more precarious. The country has a fragile healthcare system and borders Iran, where COVID-19 infection has been widespread — and from where more than 100,000 Afghans have returned in recent weeks.

"We are not going outside, we are staying in home to be safe, because of this global threat," Mohammad says. "And I wish — I hope — everything will get good and the suspended flights will restart."

But everything depends on getting new visas. Last week, a pair of bipartisan senators urged Secretary of State Mike Pompeo and acting Homeland Security Secretary Chad Wolf to extend SIVs and other visas for refugees approved for resettlement in the U.S.

Biglin, Mohammad's lawyer, says the best-case scenario would see his client travel at the end of the year.