Accessibility links
Rainfall Could Be A Factor In Triggering Some Volcanoes Extreme rainfall might set off volcanoes that are ready to blow. A pair of scientists think that's what happened at Hawaii's Kilauea volcano in 2018, though some volcanologists are doubtful. 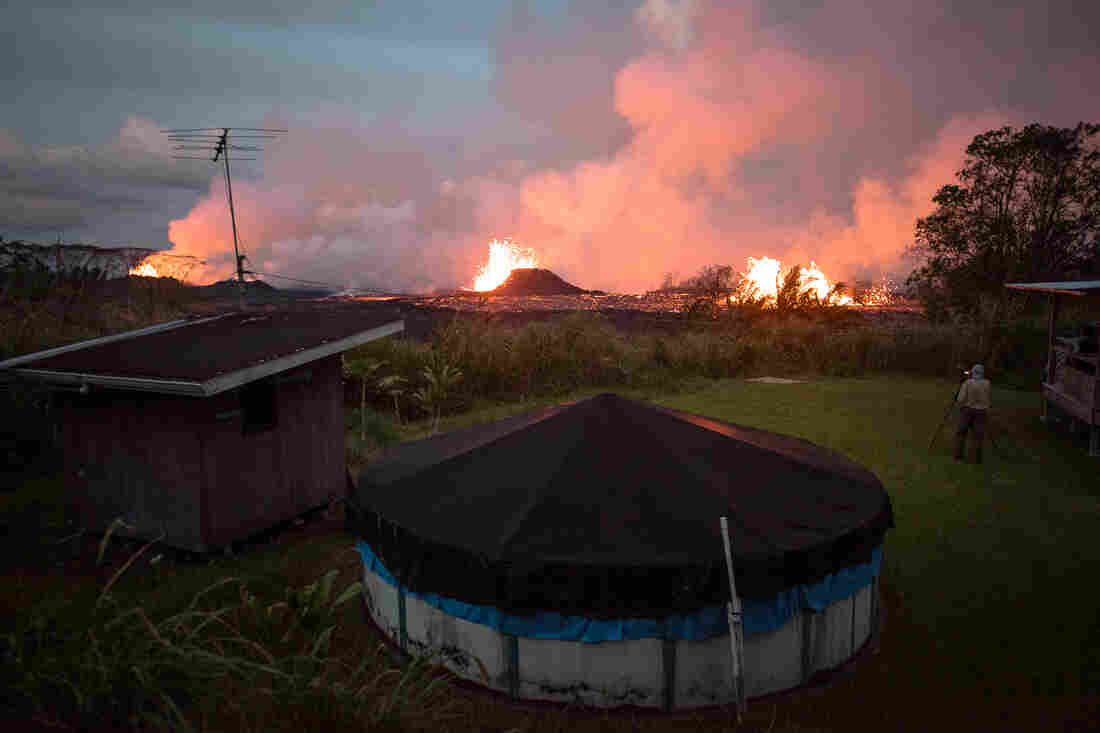 Lava spewed from Kilauea's East Rift Zone in Pahoa, Hawaii, amid eruptions from the Kilauea volcano in May 2018. Ronit Fahl/AFP via Getty Images hide caption 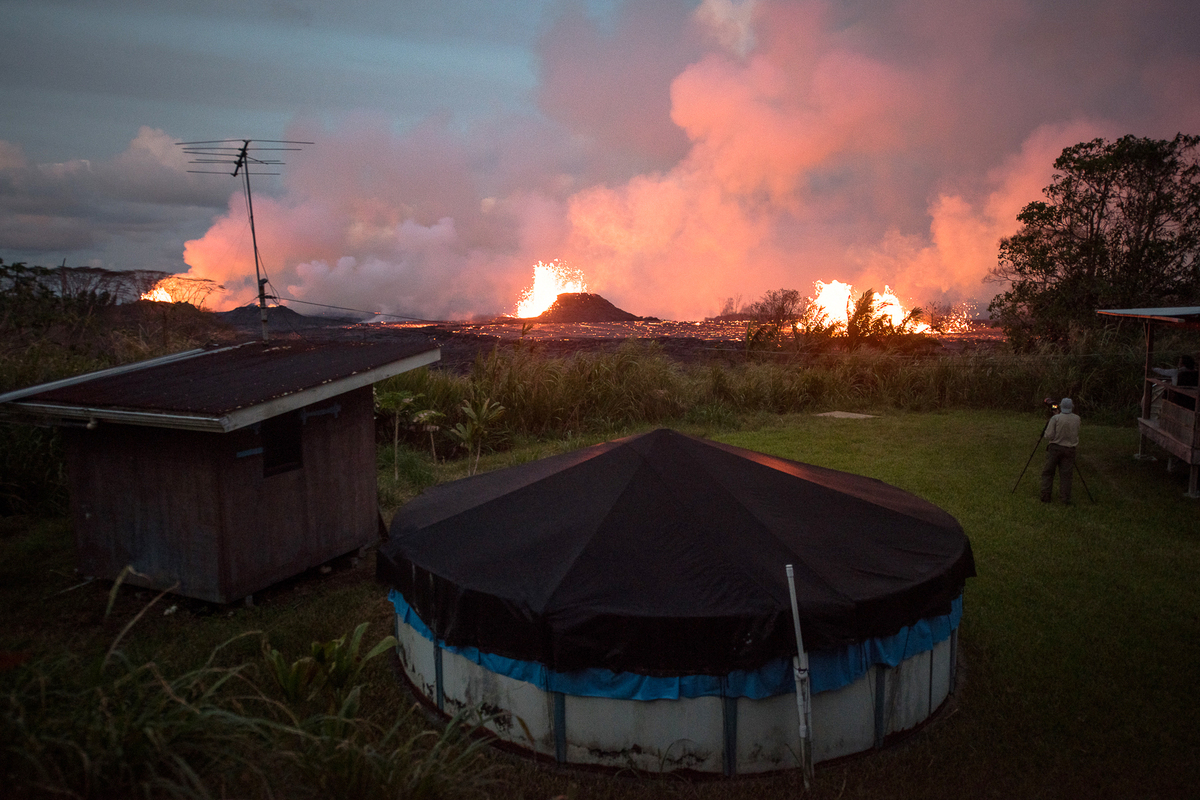 Lava spewed from Kilauea's East Rift Zone in Pahoa, Hawaii, amid eruptions from the Kilauea volcano in May 2018.

Heavy rains might have triggered the historic eruption of Kilauea in Hawaii in 2018. That's the bold assertion of a new analysis that has left some volcanologists intrigued and others doubtful.

Kilauea had been erupting since 1983 when, in the spring of 2018, it suddenly became extraordinarily more active. What followed was the most dramatic and destructive period of volcanic events in the U.S. since the 1980 eruption of Mount St. Helens.

On Hawaii's Big Island, huge plumes of ash rose into the sky, and new fissures opened up and spewed fountains of lava, forcing nearby residents to flee as molten rock streamed toward the ocean. By the time things quieted down several months later, about 700 homes had been destroyed.

All of this could have been set off by unusual amounts of rainfall in the preceding months, researchers say in the journal Nature.

Because the surface of the island is so porous, the rainwater would have penetrated deep down, more than a mile beneath the surface. The pressure of all this groundwater pushing against the rock could have opened up fractures and created new paths for trapped magma to flow upward.

"It is very difficult to really prove it. On the other hand, we know very well that water is what controls lots of things. The physics is very clear. If you put water into the rock, then it's going to get weaker," says Falk Amelung of the University of Miami, who published this new research with his colleague there, Jamie Farquharson.

Records going back to 1790 suggest that this volcano is more likely to have eruptions during the most rainy part of the year, the researchers note. They also used satellite measurements of rainfall data along with computer modeling of the subterranean effect of this water to show how precipitation could have led to the 2018 eruption.

"By compiling all these different lines of evidence, we think we have a pretty solid foundation for our theory that we put forward," says Farquharson.

"I hope people are going to believe it," says Amelung, though he predicted that their claim is "going to be controversial."

Geologists working at the Hawaiian Volcano Observatory say it's important to study and understand what triggers volcanic activity.

"In this particular case, our data and our observations and interpretation lead us to a different conclusion," says Christina Neal, a volcanologist with the U.S. Geological Survey who is currently the scientist-in-charge at the observatory. "But that's just part of the normal scientific process, where ideas are debated in the literature and that will play out here in the coming weeks and months."

Scientists at the observatory have recently gone back and looked carefully at precipitation records that go back decades. "We see other intense spikes in rainfall that did not result in eruptions," says Neal.

What's more, before the eruption of Kilauea in May of 2018, their measurements showed that pressure was building up in the volcano's internal system of molten rock.

"Our interpretation is that the eruption was driven by another process. Not rainfall, but internal pressure in the magma system," says Matthew Patrick, who is also with the USGS. 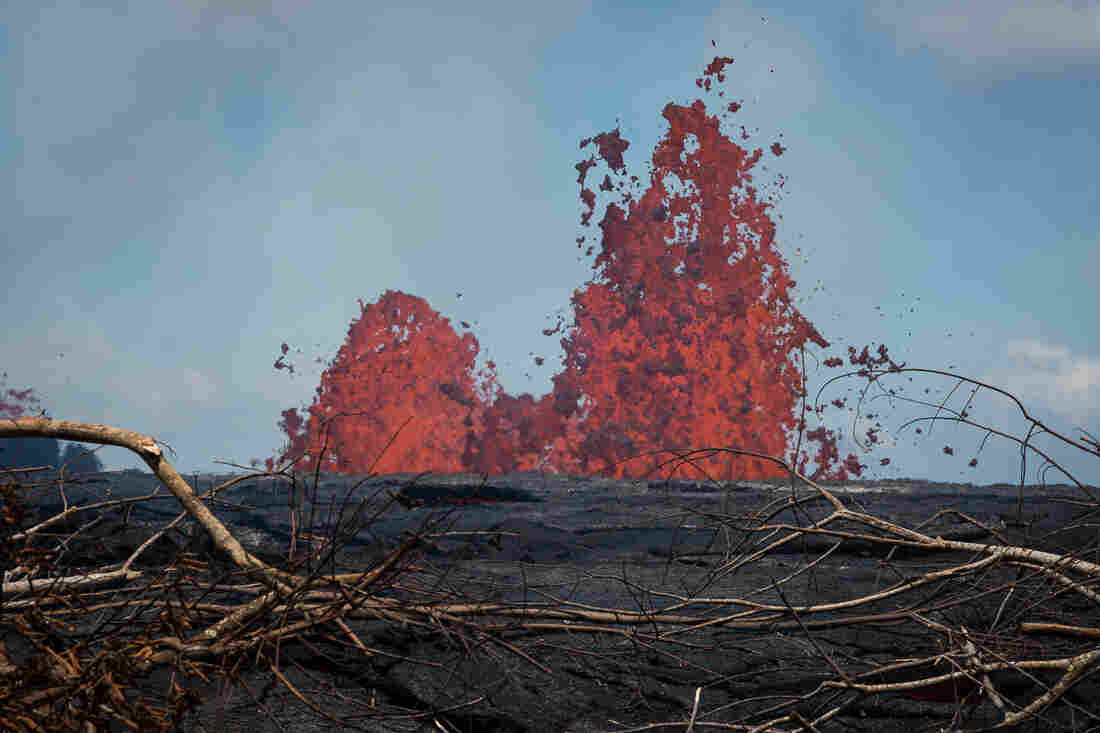 Fissure 21 of the Kilauea volcano is seen on May 22, 2018, in the Leilani Estates subdivision of Pahoa, Hawaii. Ronit Fahl/AFP via Getty Images hide caption 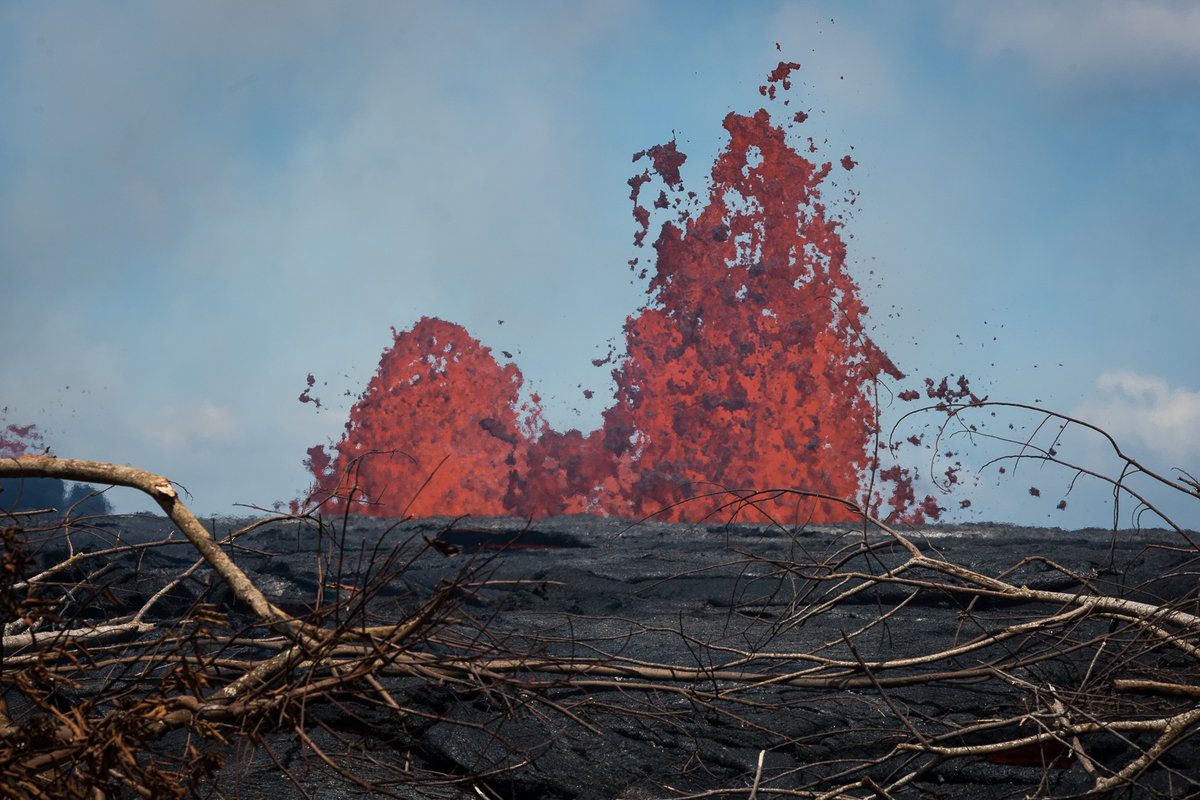 Fissure 21 of the Kilauea volcano is seen on May 22, 2018, in the Leilani Estates subdivision of Pahoa, Hawaii.

He says in the weeks preceding the eruption, magma had started to accumulate closer to the surface. "We saw the lava lakes were rising up to unprecedented levels and spilling out," says Patrick. "That was a visual sign that the magmatic system was pressurized."

But Amelung says that even so, heavy rainfall could have been what finally pushed the whole system over the edge.

"We're not saying that if there is strong rain, then you are going to get a volcanic eruption," says Amelung. "The system needs to be pressurized anyway, pretty heavily. It needs to be close to an intrusion or eruption, and then the water comes in and weakens the rock, and then it can start propagating the magma."

Past research on other volcanoes has suggested that rainfall can play an important role, but at much shallower depths of less than 1,000 feet.

Some volcanoes form what are called "lava domes," where extremely hot material builds up in the crater, says Jenni Barclay, a professor of volcanology at the University of East Anglia. Her work suggests that rain that falls into fissures or cracks can hit this hot material and instantly turn into steam, potentially causing fractures and explosions.

"Those lava domes are very dangerous because they have a tendency to have sudden changes in eruptive behavior," she says, explaining that a collapsing lava dome can send red-hot currents of ash, gas and rock streaming down the sides of the volcano.

"My personal feeling about it, having studied it, is that there are certain conditions under which the volcano is perhaps already quite close to being primed to erupt or collapse and that the rainfall perhaps provides an extra tipping," she says.

This new work on Kilauea is interesting because it suggests a different way that rainfall could give a volcano an extra push, at much greater depths, says Barclay.

Alison Graettinger, a volcanologist at the University of Missouri — Kansas City, says it's clear that rainfall can affect the stability of soil and rock — by causing landslides, for example — and it's worth investigating things that are known to influence the environment as possible triggers for volcanic events.

But she says when any volcano is going to erupt, the trigger could be many different things. "So being able to ever pinpoint it and say there's a culprit is really challenging science," says Graettinger.