Accessibility links
Virginia's Lawmakers Go To Extremes To Meet During The Coronavirus Epidemic To abide by social distancing for Wednesday's session, Virginia's House members gather outside under large white event tents while the Senate meets in a 11,000 sq. ft. space at a local museum. 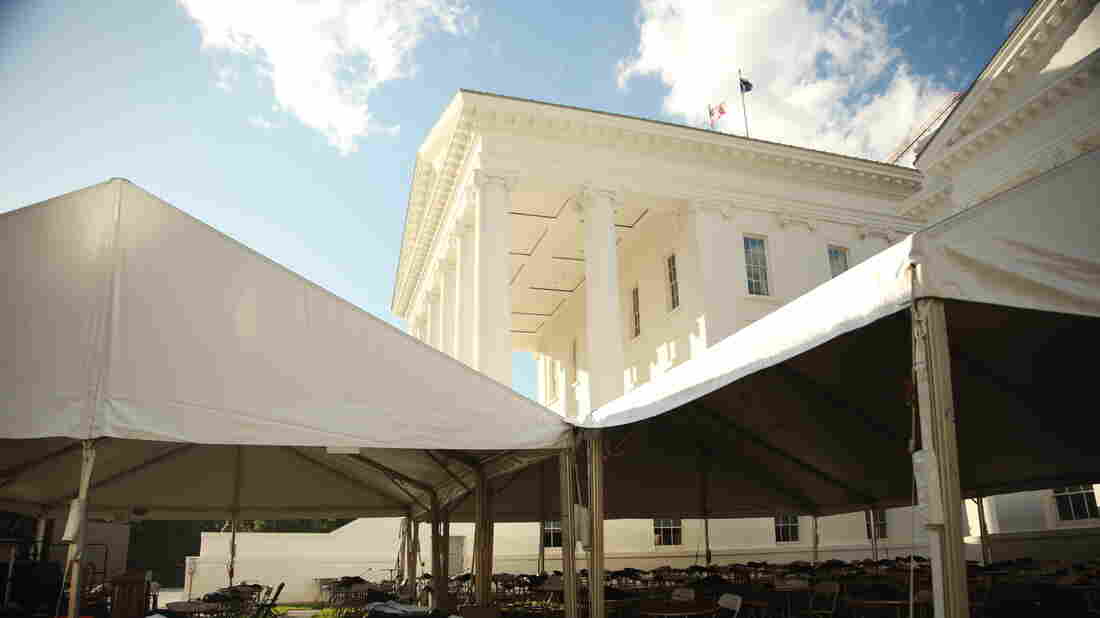 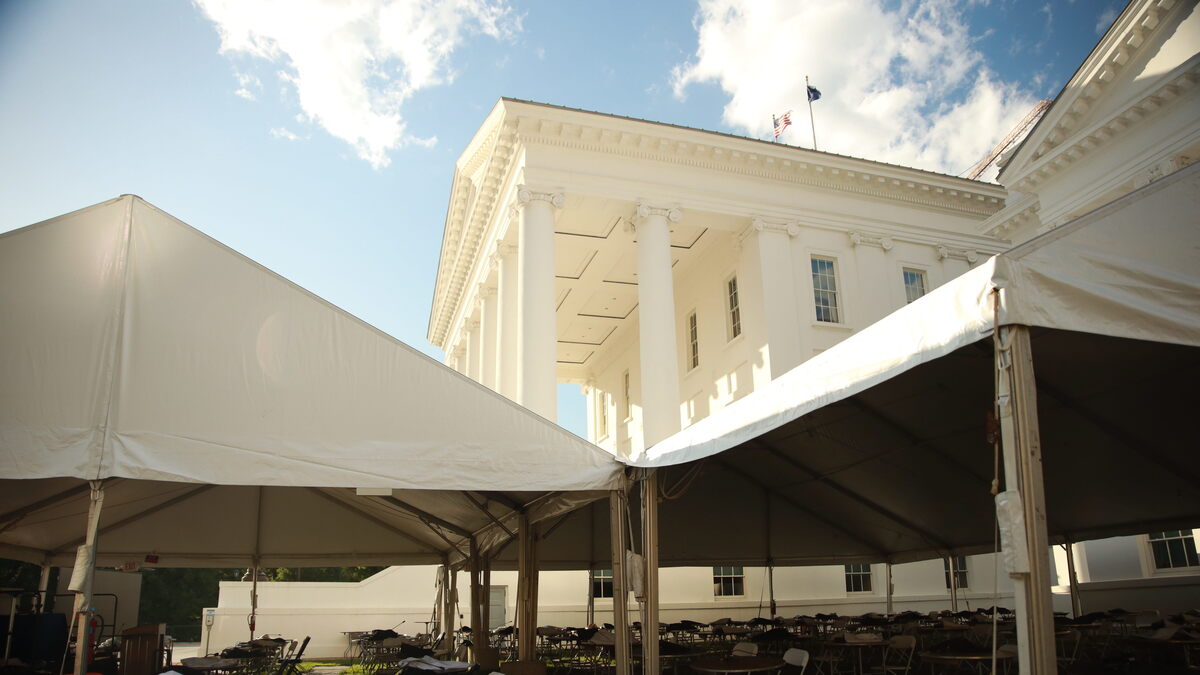 Virginia's House is meeting outside on the grounds of the Capitol beneath a large white event tents. Lawmakers will be seated at small folding tables spaced at least six feet apart. The state Senate, meanwhile, will decamp a couple of miles down the road at an 11,000 sq. ft. annex offered up by the Science Museum of Virginia.

Members have been advised to dress comfortably, pack a lunch, and leave their ties at home. "Apparently they are magnets for germs," wrote House clerk Suzette Denslow in an email.

Staff have spent weeks preparing for what is usually a one-day session. "I haven't seen anything like this before," said Senate clerk Susan Schaar from behind a mask last week. She's a 40-year veteran of the post who oversaw the Senate's entire operation to meet at the science museum including transporting and re-assembling voting equipment, microphones and heavily-scrubbed folding tables. 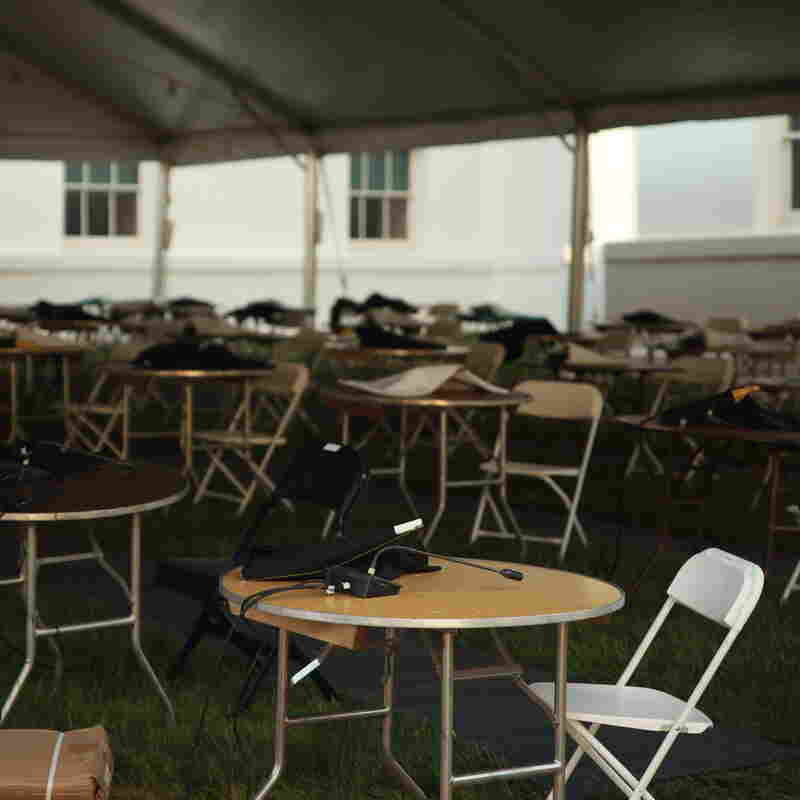 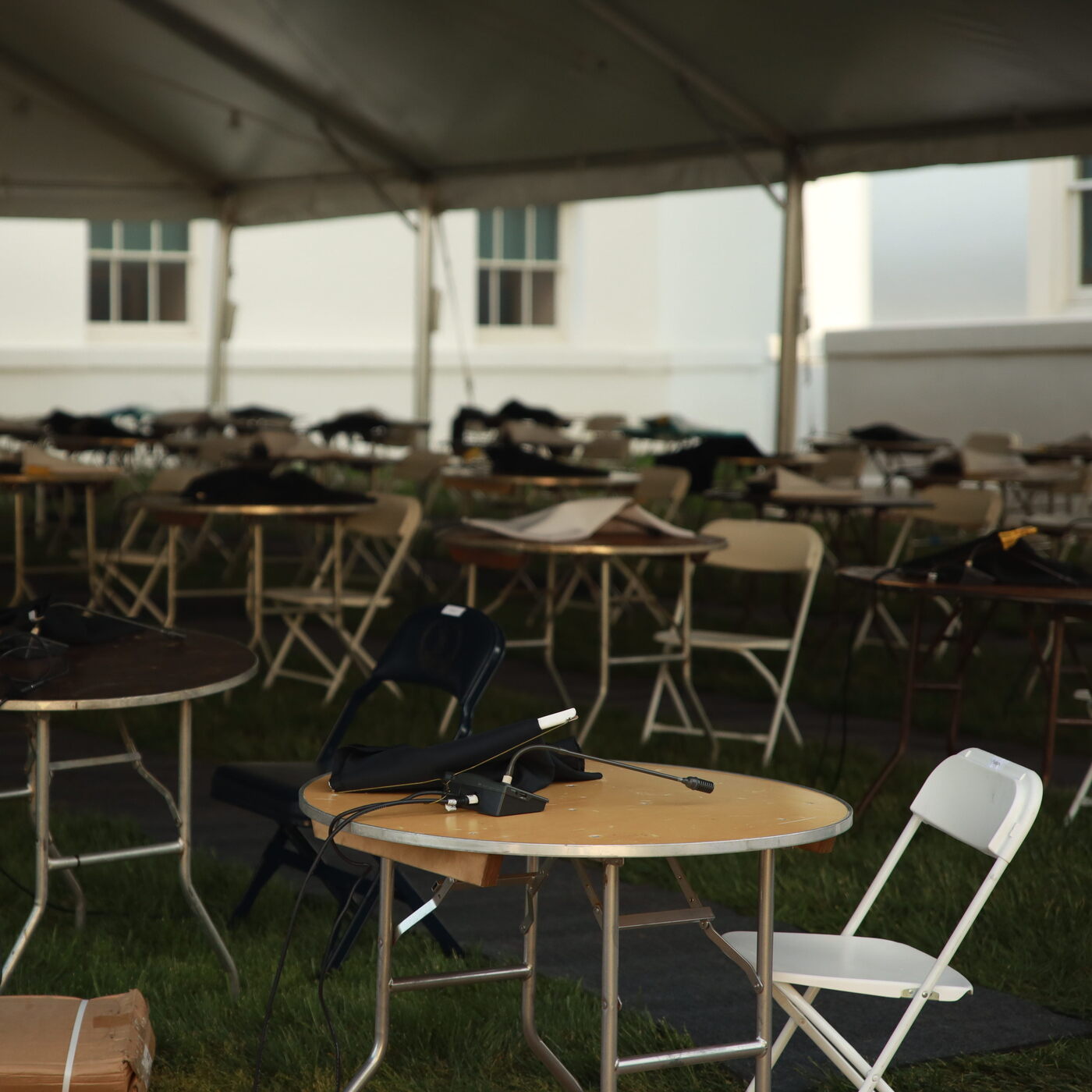 This session was supposed to be a victory lap for Virginia Democrats, who took control of the legislature in November. They passed far-reaching legislation on gun control, the environment, and education.

Instead, lawmakers must vote on a plan from Gov. Ralph Northam to suspend all new spending in the state's new two-year budget. His administration expects at least a $1 billion shortfall per year.

Other states are grappling with similar gaps but first they have to figure out where, or how, to meet.

Some states, like California, have put off meetings until at least May.

Others have taken a staggered approach to voting, or come up with other plans to try to keep members safe. Arkansas's House met last month in a basketball arena. Lawmakers in Ohio passed rules allowing for staggered votes and encouraging casual dress, which they say is likely to be cleaned regularly.

In some cases, lawmakers have been able to weigh in from their living rooms. Utah kicked off its first-ever virtual legislative session last week. Chambers in at least 13 states have approved rules allowing virtual voting and many have already held digital sessions, according to Natalie Wood, director of National Conference of State Legislatures' Center for Legislative Strengthening.

Lawmakers Defy Warnings, Continue To Meet In Capitols Across The Country

"By most accounts, it's gone pretty well," Wood says.

Eileen Filler-Corn, Virginia's Democratic Speaker of the House, has signaled she'd like to bring digital sessions to Virginia during the pandemic. There's nothing in Virginia's Constitution prohibiting the plan and Democratic Gov. Ralph Northam endorsed the idea last week.

But it's led to eye-rolls from some legislative staff, who say some lawmakers still have their emails printed for them. House Republicans aren't sold on the plan to quit the chambers, either; Filler-Corn will need their votes to pass a rules change.

House minority leader Todd Gilbert said he sympathized with the reasons for the plan, even as he questioned the logistics.

"There are potentially any number of unforeseen problems that could prevent a member from exercising their constitutional duties," Gilbert said in a statement.

At least for now, the legislature will have to meet in person. The longest-serving member of Virginia's House, 78-year-old Democrat Ken Plum, says he would take precautions like wearing a mask but that he has an obligation to go.