Accessibility links
READ: Trump Signs Proclamation Suspending Immigration The order "will ensure that unemployed Americans of all backgrounds will be first in line for jobs as our economy reopens," Trump said at the White House Wednesday. 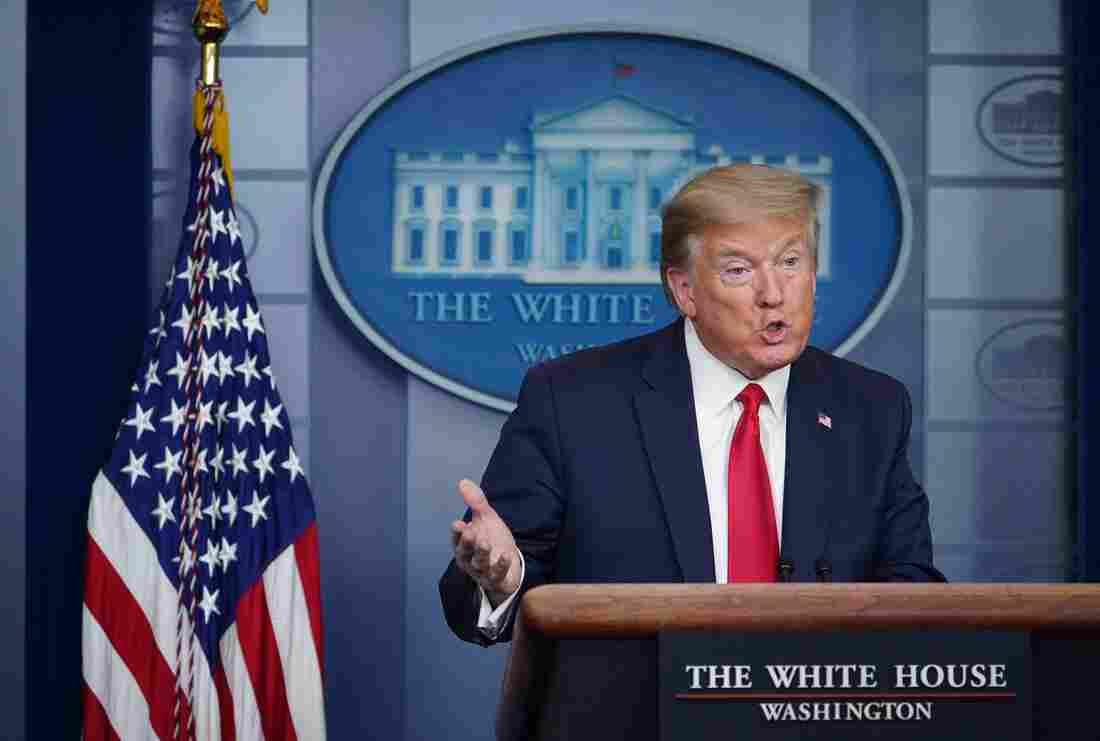 President Trump speaks during the daily briefing on the novel coronavirus on April 22, 2020. MANDEL NGAN/AFP via Getty Images hide caption 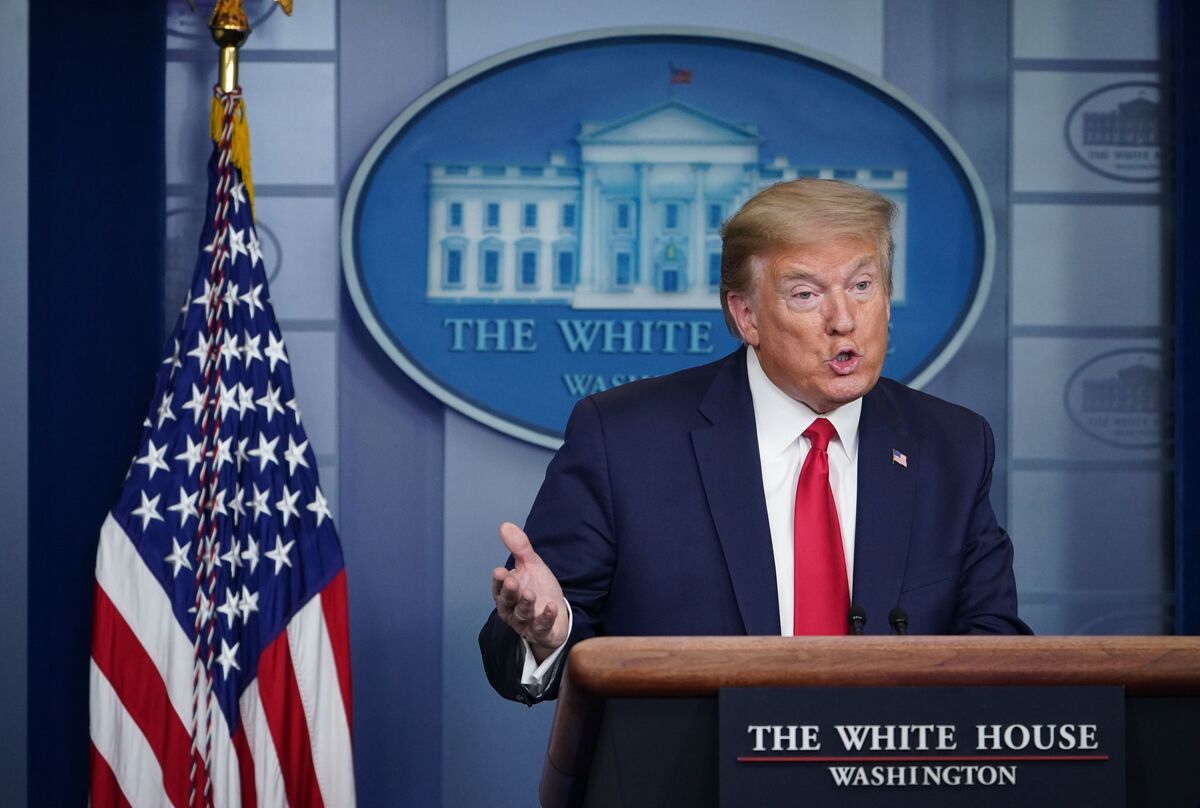 President Trump speaks during the daily briefing on the novel coronavirus on April 22, 2020.

President Trump signed a proclamation Wednesday "temporarily suspending immigration into the United States" in what he calls a response to the economic crisis caused by the coronavirus pandemic.

"This will ensure that unemployed Americans of all backgrounds will be first in line for jobs as our economy reopens," Trump said at the White House Wednesday.

The proclamation, which Trump first announced in a late-night tweet Monday, suspends immigration for people seeking green cards for 60 days.

The suspension applies to individuals who, as of Wednesday, are outside of the United States, do not have an immigrant visa and do not have official travel documents other than visas.

There are exceptions for permanent residents of the U.S., along with spouses and the children of U.S. citizens. The suspension also does not apply to individuals seeking to enter the country on an immigrant visa as a health care professional or medical researcher working to combat the coronavirus.

In a statement, Trump said he was asking the administration to review guest-worker programs to assess if more steps were needed to protect American workers.

When asked on Tuesday how the administration would decide on whether to extend the order past 60 days, Trump said he'll use the economy as a marker.

"We'll see where we are with the economy, basically. And I think I'll have a very easy decision to make," Trump explained. "I hope that the economy is going to be great by that time, but we'll see. But, right now, in light of the fact that Americans are out of jobs, I can't be taking in."

Trump suggested he could envision both rolling out an additional 30 days of the order as well as extending it by "much more" than 60 days.

The order is the broadest expansion of immigration restrictions imposed in the U.S. since the outbreak of the coronavirus. Earlier travel bans were targeted at slowing the spread of the pandemic.

You can read the full proclamation below.

"Proclamation Suspending Entry of Immigrants Who Present Risk to the U.S. Labor Market During the Economic Recovery Following the COVID-19 Outbreak"

The 2019 Novel Coronavirus (COVID-19) has significantly disrupted the livelihoods of Americans. In Proclamation 9994 of March 13, 2020 (Declaring a National Emergency Concerning the Novel Coronavirus Disease (COVID-19) Outbreak), I declared that the COVID–19 outbreak in the United States constituted a national emergency, beginning March 1, 2020. Since then, the American people have united behind a policy of mitigation strategies, including social distancing, to flatten the curve of infections and reduce the spread of SARS–CoV–2, the virus that causes COVID-19. This needed behavioral shift has taken a toll on the United States economy, with national unemployment claims reaching historic levels. In the days between the national emergency declaration and April 11, 2020, more than 22 million Americans have filed for unemployment.

In the administration of our Nation's immigration system, we must be mindful of the impact of foreign workers on the United States labor market, particularly in an environment of high domestic unemployment and depressed demand for labor. We must also conserve critical State Department resources so that consular officers may continue to provide services to United States citizens abroad. Even with their ranks diminished by staffing disruptions caused by the pandemic, consular officers continue to provide assistance to United States citizens, including through the ongoing evacuation of many Americans stranded overseas.

I have determined that, without intervention, the United States faces a potentially protracted economic recovery with persistently high unemployment if labor supply outpaces labor demand. Excess labor supply affects all workers and potential workers, but it is particularly harmful to workers at the margin between employment and unemployment, who are typically "last in" during an economic expansion and "first out" during an economic contraction. In recent years, these workers have been disproportionately represented by historically disadvantaged groups, including African Americans and other minorities, those without a college degree, and the disabled. These are the workers who, at the margin between employment and unemployment, are likely to bear the burden of excess labor supply disproportionately.

Furthermore, lawful permanent residents, once admitted, are granted "open-market" employment authorization documents, allowing them immediate eligibility to compete for almost any job, in any sector of the economy. There is no way to protect already disadvantaged and unemployed Americans from the threat of competition for scarce jobs from new lawful permanent residents by directing those new residents to particular economic sectors with a demonstrated need not met by the existing labor supply. Existing immigrant visa processing protections are inadequate for recovery from the COVID-19 outbreak. The vast majority of immigrant visa categories do not require employers to account for displacement of United States workers. While some employment-based visas contain a labor certification requirement, because visa issuance happens substantially after the certification is completed, the labor certification process cannot adequately capture the status of the labor market today. Moreover, introducing additional permanent residents when our healthcare resources are limited puts strain on the finite limits of our healthcare system at a time when we need to prioritize Americans and the existing immigrant population. In light of the above, I have determined that the entry, during the next 60 days, of certain aliens as immigrants would be detrimental to the interests of the United States.

Section 1. Suspension and Limitation on Entry. The entry into the United States of aliens as immigrants is hereby suspended and limited subject to section 2 of this proclamation.

(i) are outside the United States on the effective date of this proclamation;

(ii) do not have an immigrant visa that is valid on the effective date of this proclamation; and

(iii) do not have an official travel document other than a visa (such as a transportation letter, an appropriate boarding foil, or an advance parole document) that is valid on the effective date of this proclamation or issued on any date thereafter that permits him or her to travel to the United States and seek entry or admission.

(b) The suspension and limitation on entry pursuant to section 1 of this proclamation shall not apply to:

(i) any lawful permanent resident of the United States;

(ii) any alien seeking to enter the United States on an immigrant visa as a physician, nurse, or other healthcare professional; to perform medical research or other research intended to combat the spread of COVID-19; or to perform work essential to combating, recovering from, or otherwise alleviating the effects of the COVID-19 outbreak, as determined by the Secretary of State, the Secretary of Homeland Security, or their respective designees; and any spouse and unmarried children under 21 years old of any such alien who are accompanying or following to join the alien;

(iii) any alien applying for a visa to enter the United States pursuant to the EB-5 Immigrant Investor Program;

(iv) any alien who is the spouse of a United States citizen;

(v) any alien who is under 21 years old and is the child of a United States citizen, or who is a prospective adoptee seeking to enter the United States pursuant to the IR-4 or IH-4 visa classifications;

(vi) any alien whose entry would further important United States law enforcement objectives, as determined by the Secretary of State, the Secretary of Homeland Security, or their respective designees, based on a recommendation of the Attorney General or his designee;

(viii) any alien seeking to enter the United States pursuant to a Special Immigrant Visa in the SI or SQ classification, subject to such conditions as the Secretary of State may impose, and any spouse and children of any such individual; or

(b) An alien who circumvents the application of this proclamation through fraud, willful misrepresentation of a material fact, or illegal entry shall be a priority for removal by the Department of Homeland Security.

(c) Nothing in this proclamation shall be construed to limit the ability of an individual to seek asylum, refugee status, withholding of removal, or protection under the Convention Against Torture and Other Cruel, Inhuman or Degrading Treatment or Punishment, consistent with the laws of the United States.

Sec. 6. Additional Measures. Within 30 days of the effective date of this proclamation, the Secretary of Labor and the Secretary of Homeland Security, in consultation with the Secretary of State, shall review nonimmigrant programs and shall recommend to me other measures appropriate to stimulate the United States economy and ensure the prioritization, hiring, and employment of United States workers.

Sec. 8. General Provisions. (a) Nothing in this proclamation shall be construed to impair or otherwise affect:

(i) the authority granted by law to an executive department or agency, or the head thereof; or,

(ii) the functions of the Director of the Office of Management and Budget relating to budgetary, administrative, or legislative proposals.

(b) This proclamation shall be implemented consistent with applicable law and subject to the availability of appropriations.

(c) This proclamation is not intended to, and does not, create any right or benefit, substantive or procedural, enforceable at law or in equity by any party against the United States, its departments, agencies, or entities, its officers, employees, or agents, or any other person.

IN WITNESS WHEREOF, I have hereunto set my hand this twenty-second day of April, in the year of our Lord two thousand twenty, and of the Independence of the United States of America the two hundred and forty-fourth.