Accessibility links
In India, Muslims Are Attacked And Blamed For Spreading Coronavirus In India, Muslims have been accused of deliberately spreading the virus. Many say they have faced increased discrimination, harassment and attacks. 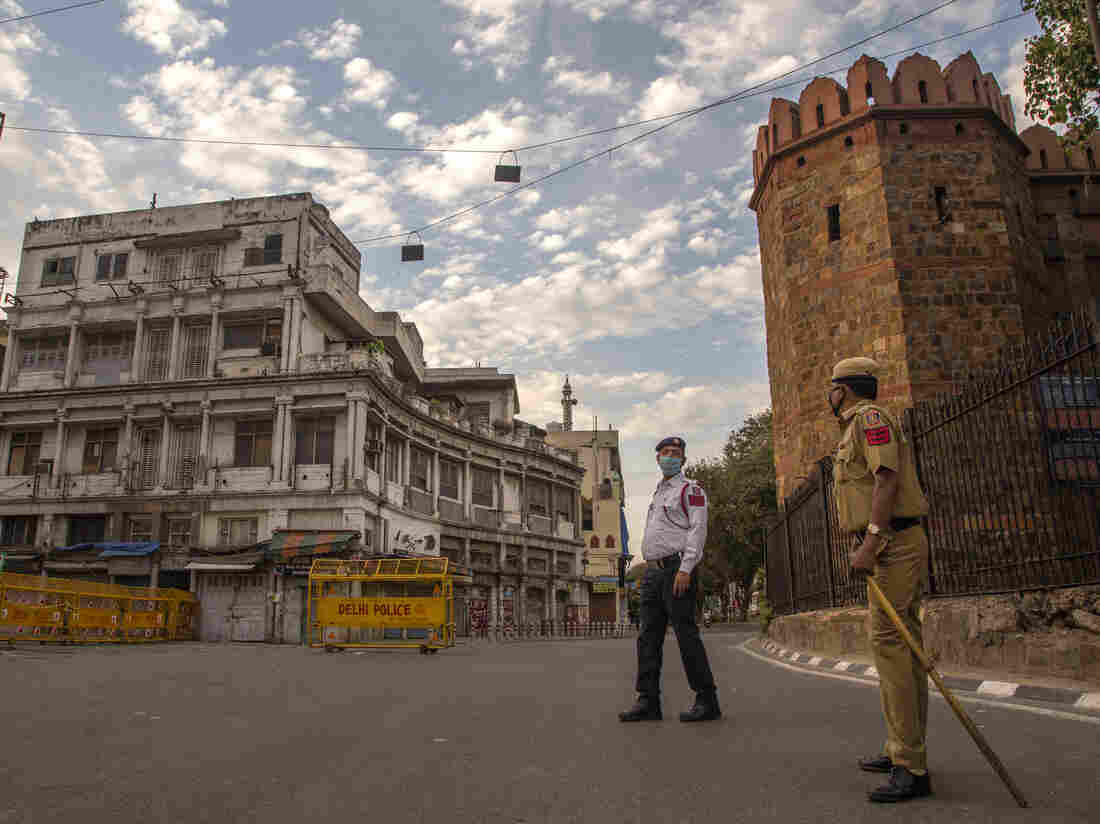 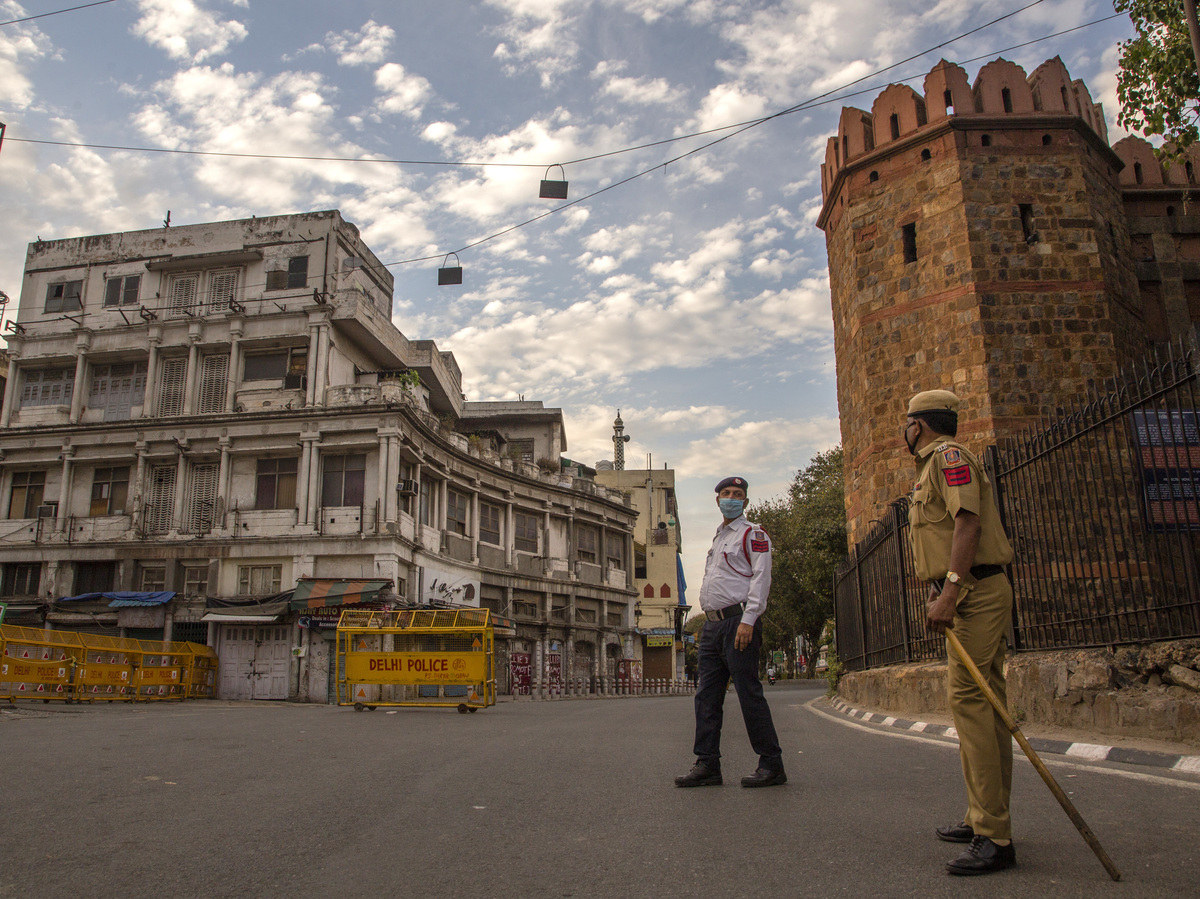 Indian policemen stand guard on a deserted road in New Delhi as India remains under lockdown over the coronavirus.

Cowering in the grass, a young Muslim man begs for his life.

He's shaking. His hands and face are bloody. His attackers beat him and threaten to douse him with fuel and set him on fire. They accuse him of intentionally trying to spread the coronavirus.

The man, identified later by authorities and neighbors as 22-year-old Mehboob Ali, was on his way home from a Muslim missionary conference in central India when he came under attack April 5 in his village of Harewali, on the northwest edge of India's capital. Ali managed to escape and was treated at a local hospital.

The assault, video of which has been shared widely in India on social media, is part of a wave of violence against Indian Muslims in recent weeks. The country's biggest religious minority, Muslims number nearly 200 million in Hindu-majority India. They have long faced abuse and violence, particularly under the Hindu nationalist government of Prime Minister Narendra Modi.

The coronavirus crisis appears to have exacerbated that. The Muslim missionary group Ali is affiliated with, Tablighi Jamaat, was criticized for holding another conference in New Delhi, which turned into one of India's biggest coronavirus hot spots. But even Muslims unaffiliated with the group say they have faced increased discrimination, harassment and attacks. The violence has been fueled, victims and observers say, by right-wing Hindu nationalist TV channels, misinformation on social media and statements from ruling party politicians.

In early March, Tablighi Jamaat — an Islamic movement with tens of millions of followers worldwide — held a conference at its Delhi headquarters in violation of social distancing rules. Authorities believe attendees caught COVID-19 there and then returned home, spreading the virus across India. While testing is not widespread, the Health Ministry has said about 30% of India's total COVID-19 cases have been traced to people who attended the event. Tens of thousands of people who came in contact with them have been quarantined.

On April 16, India charged one of the movement's leaders, Muhammad Saad Kandhalvi, with culpable homicide. If convicted, he faces up to 10 years in prison. Kandhalvi remains in hiding, but his spokesman Musharraf Ali Khan issued a video statement urging followers to cooperate with police.

"Turn yourself in if you've spent time at any Jamaat events," he said. "Cooperate with police, who are trying to contact-trace you. There's no need to hide or misbehave."

His plea came amid reports of Jamaat members behaving badly. At a quarantine facility in Delhi, they reportedly spat on doctors. In neighboring Uttar Pradesh, they allegedly made inappropriate comments and dropped their pants in front of female nurses. A hospital in the same state reportedly removed female staffers from duty after Jamaat members allegedly "misbehaved" with them.

Some such reports have turned out to be untrue. But anger has nevertheless exploded across India.

"These are dangerous people, these lockdown cheats!" Arnab Goswami, a news anchor on India's popular Republic TV, shouted in a March 31 broadcast. "They have compromised us all!"

One official from Modi's Bharatiya Janata Party suggested that Jamaat members should be shot. Another, however, issued a warning.

"Nobody should speak a word against Muslims," Karnataka's chief minister, B.S. Yediyurappa, told local TV. "If anyone blames the entire Muslim community for some isolated incident, I'll take action against them."

On Sunday, after the Organization of Islamic Cooperation expressed "deep concern" over what it called "Islamophobia within political and media circles" in India, Modi tweeted a plea for "unity and brotherhood."

Our response and conduct thereafter should attach primacy to unity and brotherhood.

We are in this together: PM @narendramodi

"COVID-19 does not see race, religion, colour, caste, creed, language or borders before striking," the prime minister wrote. "We are in this together."

Various other religious events, including a Hindu chariot-pulling festival, have been held across India in violation of lockdown rules. But none has garnered as much public outrage as Jamaat's Delhi conference.

The #CoronaJihad hashtag is trending on Twitter in India, implying Muslims are using the virus as a form of Islamic "holy war." It's often accompanied by videos purportedly showing Muslims spitting on food and sneezing.

"The right wing has found all these old videos and is circulating them to insinuate that Indian Muslims are knowingly spreading coronavirus and that it is equivalent to terrorist activity," explains Pratik Sinha, co-founder of AltNews, an Indian website that debunks fake news.

Sinha has been investigating such videos and says most of them are misleading.

For example, a video recorded in July 2018 — before the coronavirus outbreak — depicts Muslims licking plates and utensils.

"There's a sect of Muslims called the Bohra Muslims, and they have this extreme practice where they believe no food should be wasted," Sinha told NPR. "So a bunch of young boys were licking all the plates and spoons after some event — and that went viral, claiming these are Muslims trying to spread coronavirus."

Muslim vendors have since been blocked from selling food, and beaten up. A cancer hospital was forced to apologize after refusing to admit Muslims unless they undergo a coronavirus test. In the southern city of Bengaluru, Muslim volunteers came under attack with cricket bats when they distributed food to the poor.

A member of that volunteer group, Zia Nomani, told NPR that men approached him at a charity food drive and identified themselves as members of the RSS — the Rashtriya Swayamsevak Sangh — a Hindu group with close ties to India's government. They singled him out as a Muslim because of his clothes.

Faith And Power: How Hindu Nationalism Is Changing India

"They saw me wearing a [Muslim style of] kurta [tunic], and they started saying that we should be taught a lesson and all, and it's time you leave from here," Nomani, 28, recalls.

Another volunteer recorded the confrontation on his cellphone, and Nomani tweeted footage. He left before the argument could turn violent.

At an April 9 briefing, Vikas Swarup, an Indian government official, denied there have been any retaliatory attacks against Muslims amid contact tracing of Jamaat attendees.

"I do not think this has anything to do with a particular community," he told international reporters via video. "It has to do with contagion that has been spread as a result of an irresponsible gathering."

NPR producer Sushmita Pathak contributed to this report from Mumbai.