Accessibility links
Join The Game: Indie Game Roundup This was a big spring for mainstream game studios — but summer was looking dry even before the pandemic upended everything. So it's a great time to check out some independent games. 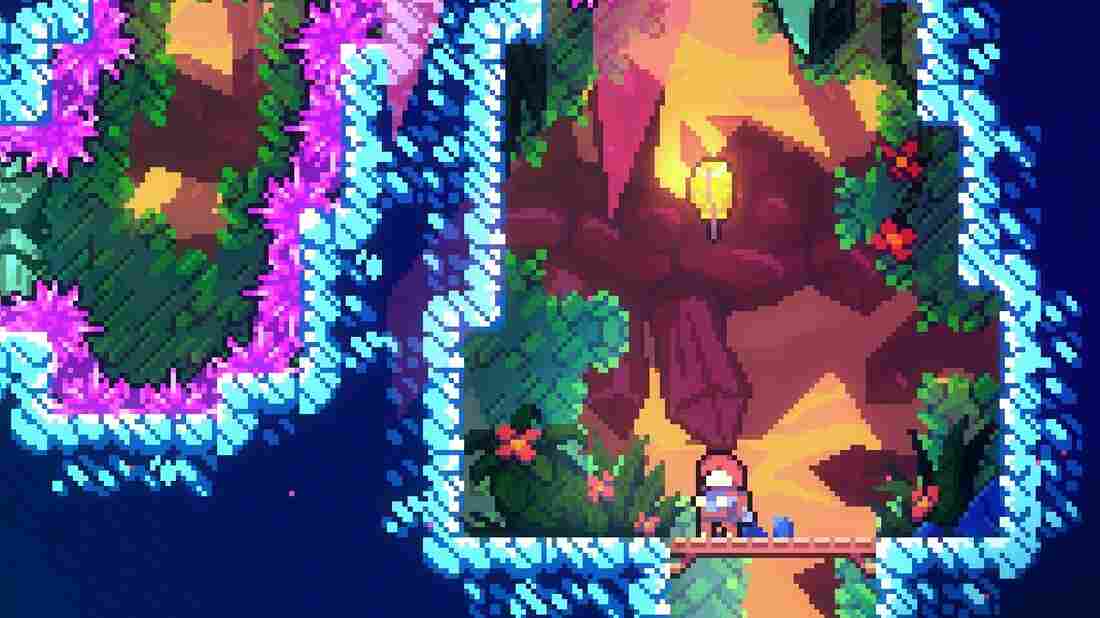 You'll die a lot in the mountain-climbing platformer Celeste — but the journey is worth it. Matt Makes Games, Inc. hide caption 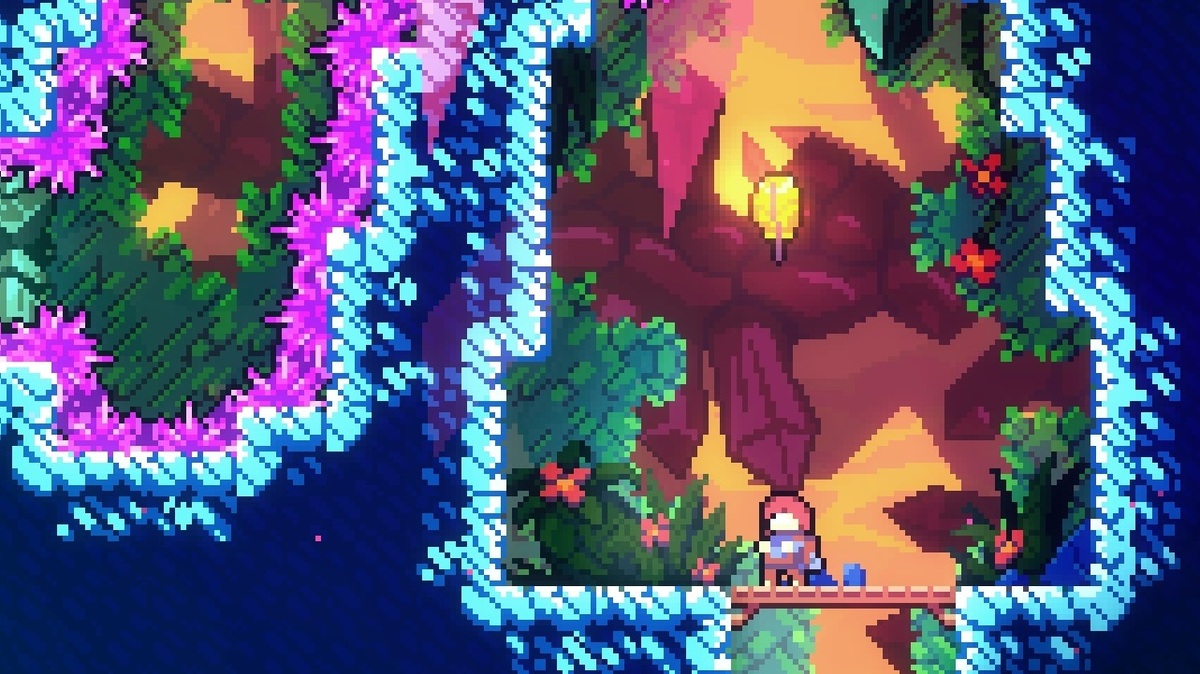 You'll die a lot in the mountain-climbing platformer Celeste — but the journey is worth it.

Spring 2020 was a big moment for video games from mainstream companies — Animal Crossing: New Horizons has dominated the conversation, but there were also Doom Eternal, Persona 5 Royal, and the remakes of Final Fantasy VII and Resident Evil 3.

But summer was looking dry even before COVID-19 upended everything — delaying hotly anticipated titles like The Last of Us 2. Which means it's a great time to get into indie games. There's an entire world out there of amazing games created by independent developers, so many that it's impossible to mention all of them.

So I've curated this list of great indie games to get you started, three single-player and three multiplayer! (And if you want more, I highly recommend checking out console stores or the online game marketplace Steam.)

You'll die a lot in Celeste — but completing the game leaves you with a huge sense of satisfaction.

It's a platformer where you play as Madeline, a woman on a journey to climb the huge, treacherous Celeste mountain. Throughout the game, you need to navigate around a gorgeous environment filled with spikes, doom blobs, and lots of opportunities to fall to your death.

On top of that, you'll occasionally get chased by an evil version of Madeline, or the ghost of a hotel owner — making the already difficult levels even more nerve-wracking.

Celeste is an insanely accurate portrayal of anxiety. You probably would be able to do things that other characters see as simple, but that anxiety makes every seemingly easy task as huge as climbing a mountain full of doom blobs. And your character fights with herself every step of the way for being stupid enough to tackle the treacherous climb.

But despite the difficulty, there are moments of calm when you can just explore and enjoy the psychedelic levels, snowy skies and dreamy electronic music. Overall, Celeste is a very nice reminder that making mistakes is a part of learning. 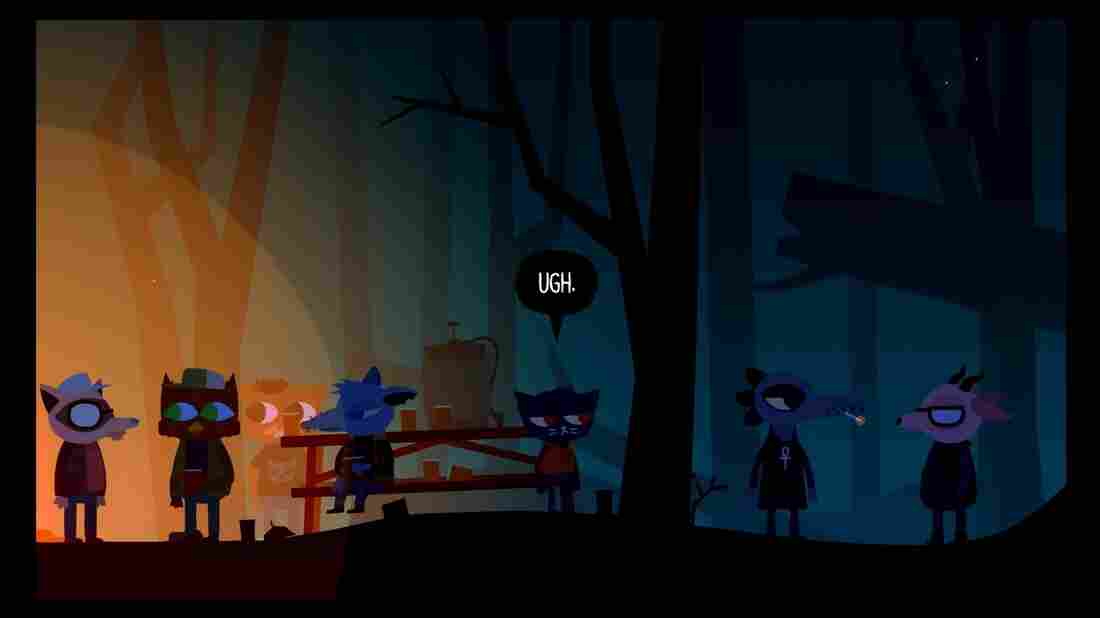 A relatable moment from Night in the Woods. Screenshot by Kaity Kline hide caption 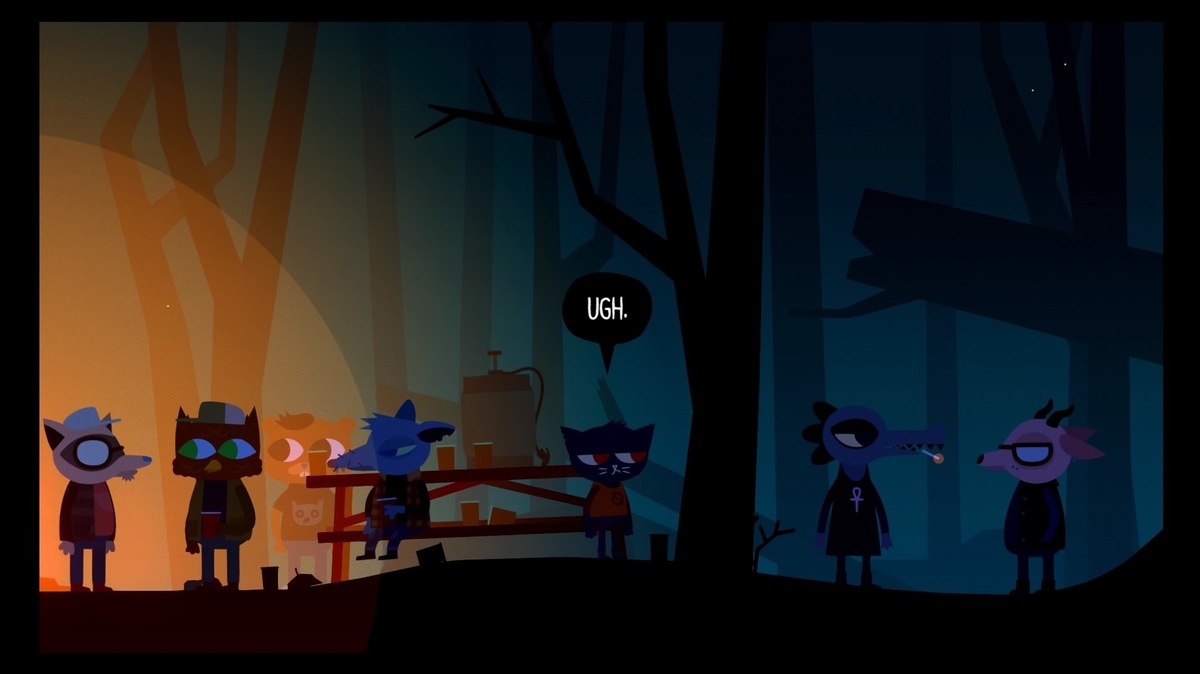 A relatable moment from Night in the Woods.

Night in The Woods

Speaking of amazing atmospheric music, next up is Night in The Woods, a narrative-focused adventure game. You play as Mae Borowski, a rebellious and 20-year-old cat (yes, cat) who drops out of college due to mental health issues.

She moves back in with her parents in her hometown Possum Springs, a tiny former mining town in economic decline. Mae's family has lived there for generations, everybody knows each other — and that means no one will let Mae forget a mysterious incident that happened when she was 14, when she did something that's made all the town's humanoid animals weirdly distant and hostile towards her.

Despite all that, home is still a safe, familiar place for Mae — but her sense of comfort soon disappears after she witnesses supernatural happenings around town. Of course, nobody believes her, and she HAS to investigate with her friends.

This is a game where I genuinely cared about all of the characters. As time passed and a few people I spoke with every day moved away, I felt a real sense of loss. Night in the Woods really shows how aimless people can feel when they are pushed into the future and things change, whether they like it or not.

And one great thing — mixed in with all the angst are a bunch of fun minigames. In one, I controlled a fish fountain and squirted people at the mall with it. Some of them fell. It was awesome.

Undertale was unique when it was released in 2015 because it allowed players to either kill their way through situations or resolve them peacefully. That choice dramatically changes both the game's story and your interactions with its characters.

You play as an unnamed human child who climbs to the top of a mountain and falls into a hole that leads to an underground world of monsters. The goal is to get back to the human world. To do so, you have to navigate through puzzles, caves, towns, and encounters with friendly and hostile characters.

The combat system is turn-based. You control a tiny heart that represents your soul, moving it around a box, and you need to protect it by dodging barrages of attacks in between your moves. If destroying people isn't your thing, you can win fights with compliments, flirting, posing dramatically, and lots of other weird options until the enemy decides they don't want to kill you.

And even if you start a new game, Undertale remembers your previous playthroughs — so being a complete monster and destroying everybody will always be a part of your story, and it will alter some endings.

But don't think things will be a walk in the park just because you chose a peaceful approach with a lot of cute, funny moments. Characters still want to fight you, and the bosses are difficult even on pacifist runs.

I still can't bring myself to kill anybody — because nearly everybody has redeeming qualities in Undertale, and it would just make me sad.

Honorable mentions: Bastion, Hollow Knight, Oxenfree, The Stanley Parable, This War of Mine.

A survival game you can play by yourself, or with a group of friends in the standalone game Don't Starve Together.

Your goal — unsurprisingly — is to survive in the wilderness for as long as possible, with a lot of magical monsters, supernatural occurrences and many ways to die. You start with basically nothing, and navigate around the environment to find food, twigs, rocks, and more while avoiding or fighting monsters (at your own risk).

The seasons change every few in-game days, which brings a lot of variety to the gameplay. (Winter is the hardest; it's more difficult to find food and other resources so players need to prepare for it by stocking up.)

You can craft the basic things you gather into more sophisticated items that make survival a little easier — like fences to protect yourself from the packs of hounds that periodically attack your campsite at night, or a sword that'll give you a better chance of surviving a fight with a monster.

The main difference between Don't Starve and Don't Starve Together is that the monsters in Together are harder to kill, making them enough of a challenge for multiple people. And if you die, your friend can craft an item to resurrect you. I suggest playing the original version if you want to play alone.

Have you ever wanted to throw your friends into the path of an oncoming train? Now's your chance! (Note: NPR doesn't approve of IRL train track murder.)

Gang Beasts is a great game if you want to laugh. It's a light-hearted, multiplayer party game where you just beat the crud out of your friends, and the last blobby man standing wins. That's basically it.

The game has many different environments — construction sites, rooms with giant wind turbines that make everybody float in the air, sheets of ice in the ocean, and giant meat grinders to toss your friends into, and a bunch of wacky costumes you can make your blob man wear (my favorite is the chicken outfit.)

The controls can be a bit difficult to get used to, but Gang Beasts isn't too challenging for beginners because it's button-mash friendly and victory can often come down to sheer luck. And once you learn the controls, you'll have an advantage. 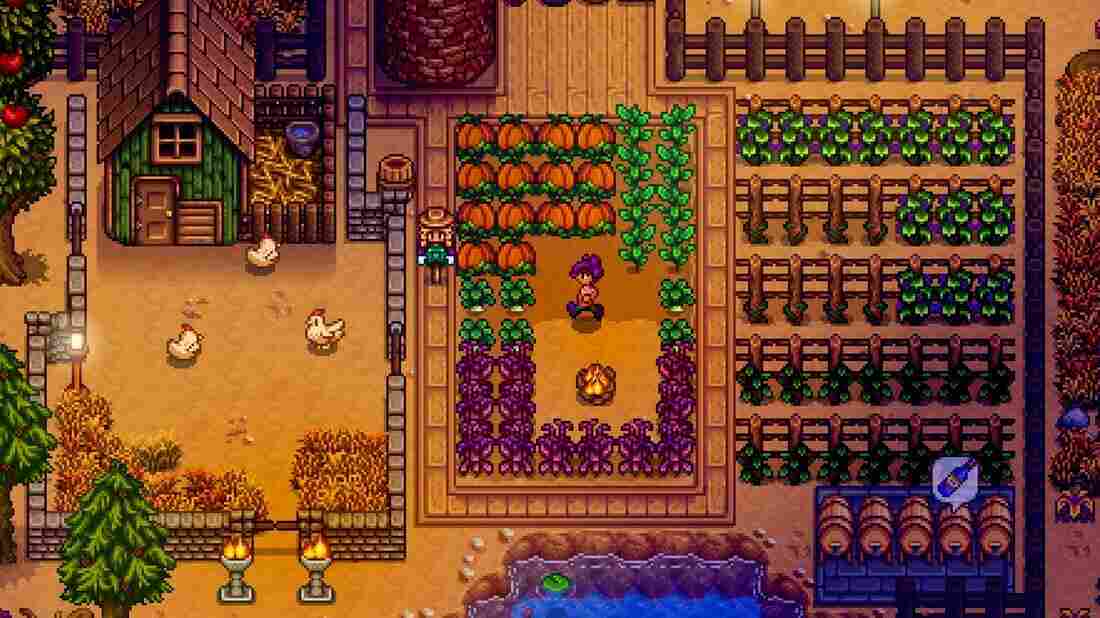 Farming simulator Stardew Valley is one of the many great indie games out there. ConcernedApe hide caption 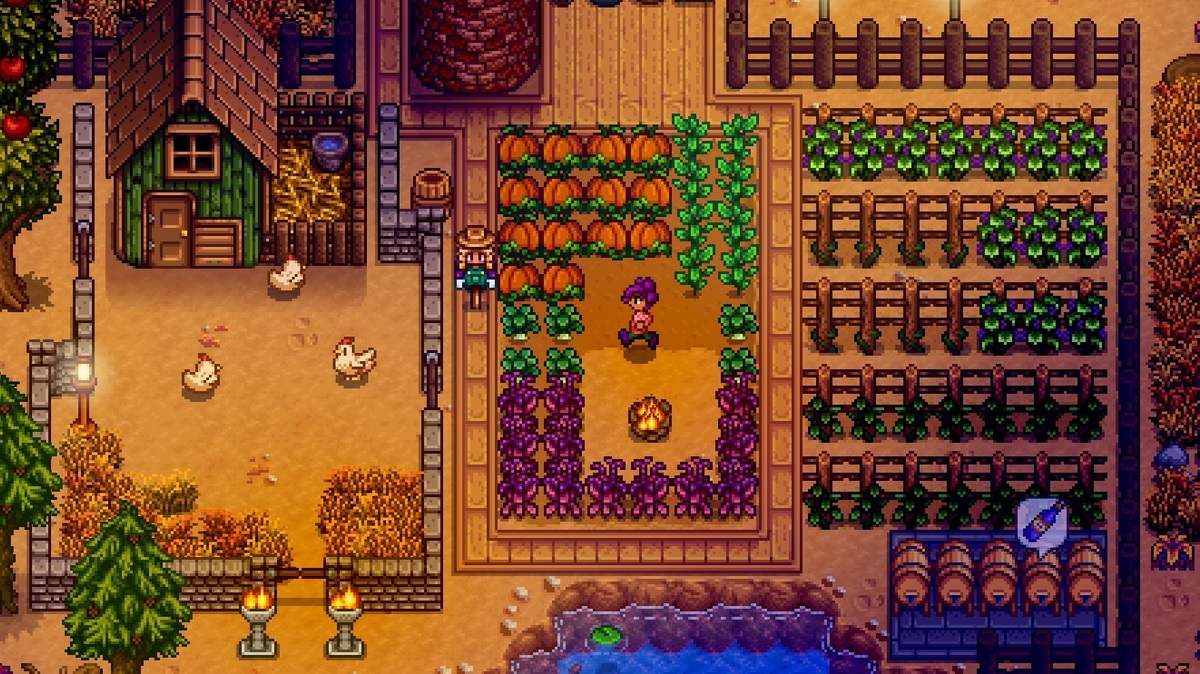 Farming simulator Stardew Valley is one of the many great indie games out there.

In this farming simulator, you play as an office drone — tired of living in the city, you decide to take over a farm you inherited from your grandfather in a tiny town called Stardew Valley.

This is a game I have sunk hundreds of hours into. It offers the same relaxation you get from Animal Crossing: New Horizons but adds more to do, like farming and fighting monsters. I would suggest this for anybody who is enjoying Animal Crossing and wants to play something similar with friends. (Or alone.)

Stardew Valley is very influenced by the classic farming sim Harvest Moon. You sell items to make money, expand your business, grow crops, take care of animals, and socialize with dozens of people in the town. You can even get married and have children. Emotional attachment will happen.

You don't need to play it for an excessive amount of time, but it is addictive. One in-game day is about 12 and a half minutes, and players can go through years and years of in-game time indefinitely, so there's no rush to accomplish anything.