Accessibility links
Ramadan, A Month About Community For Many Muslims, Goes Virtual From drive-through iftars, to card exchanges, Muslims adapt traditions to try to find a sense of community while staying apart. 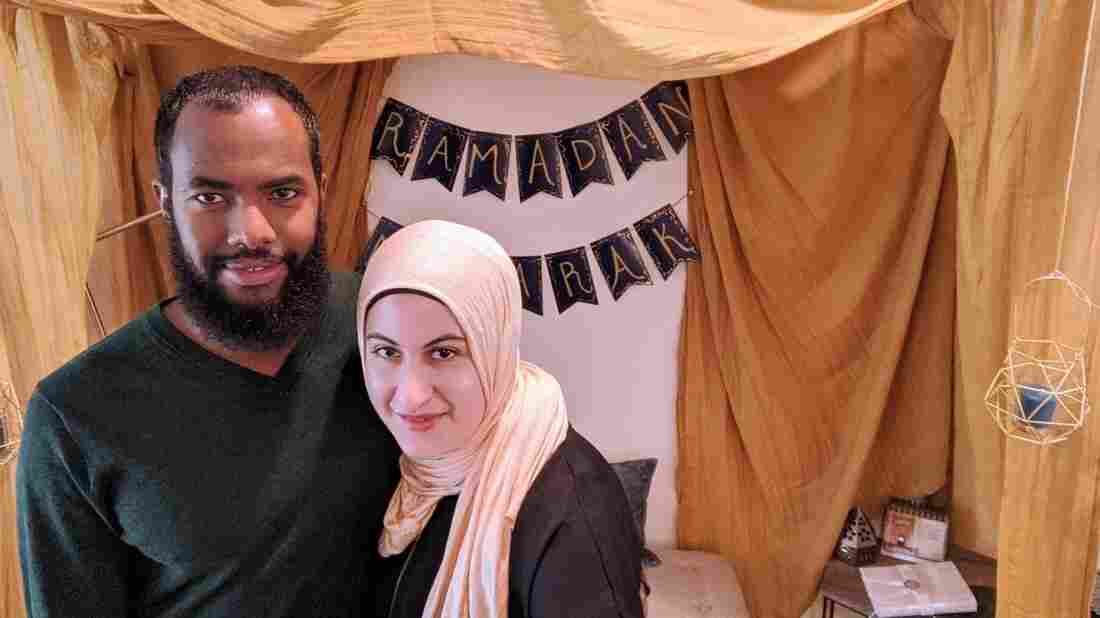 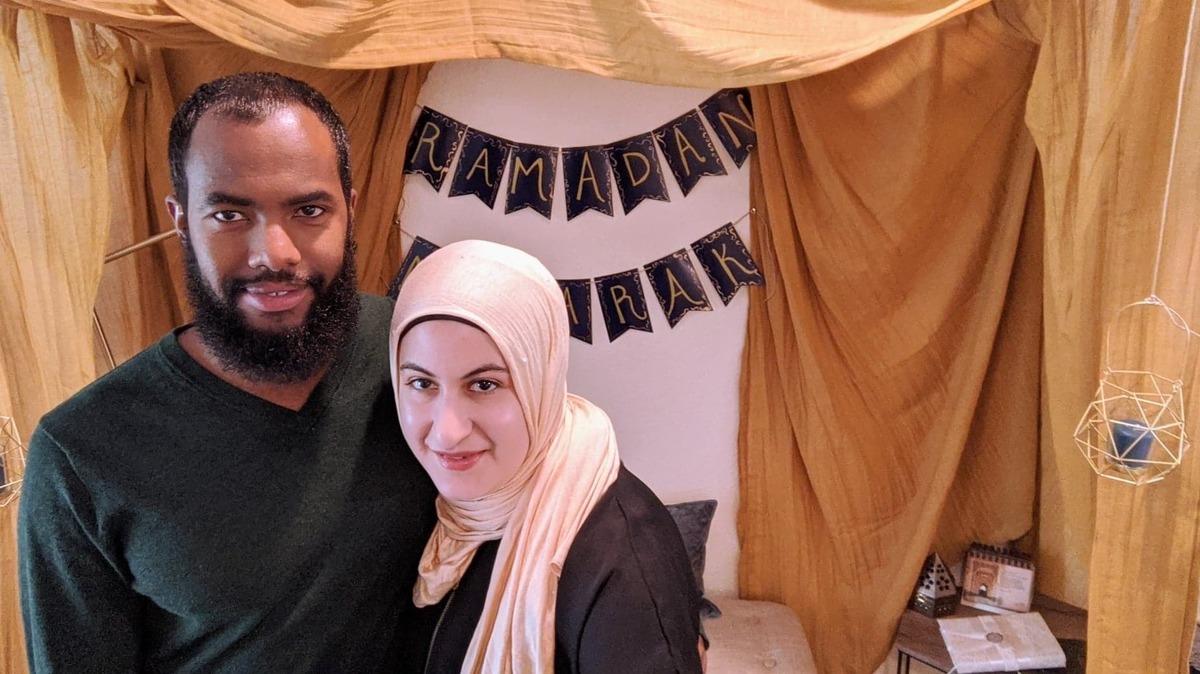 Sarah Alfaham and her husband Mohamed Ahmed decorated their home for Ramadan.

In their tiny apartment just outside Minneapolis, Sarah Alfaham directs her husband Mohamed Ahmed to hold up the gold curtains she picked up at Walmart.

She takes a look.

With thumbtacks, string and dowels, Alfaham fashions a canopy in the corner of their living room with a homemade navy blue and gold "Ramadan Mubarak" sign underneath. On the floor is a prayer rug.

"It's just really creating a mosque feel inside your house in a sense. I don't know how else to do it," she says with a laugh.

In the midst of this pandemic, congregational prayer at mosques is canceled as Ramadan begins Thursday night. Muslims fast from dawn to dusk for the month.

While Ramadan for Muslims is about sacrifice, connecting to God and charity, so much of the month is also about gathering — to pray, to eat and to give to those in need. So now people like Alfaham are adapting their traditions to figure out how to feel together while staying apart. Instead of a community potluck with friends, they're doing a card exchange in the mail. And she and her husband will do their prayers individually at home and watch lectures from a mosque they like online.

Alfaham says it hasn't really sunk in that Ramadan will be different, especially without the late-night prayers she'd usually do at the mosque on the weekends.

"You stay up all night with your friends and then you read Quran and then you hang out and you go and do some more prayers," she says. "I think the biggest change right now will be not feeling that community feel at night. That's going to be a change for us for sure."

Coronavirus Fears Derail Friday Prayers For Muslims Across The World

Alfaham doesn't like the idea of virtual iftars or the "break of a fast."

"I feel like it's awkward to eat and be hungry in front of a camera," she says.

So instead she's trying to bring that festive Ramadan feel to her household of two. An Afghan friend is doing a food blog and shared the secret recipe for her family's Qabuli Palau, a rice dish with meat broth that Alfaham loves.

"I've heard it takes people four hours to make. So I'm planning to buy a lamb this weekend and I want to make that and share photos. That's going to be my special feeling that it's Ramadan," Alfaham says. "Mohamed is Somali and I'm Syrian, so he knows it's Ramadan when it's time to make Sambusas."

Alfaham bought an air fryer and they're making the fried meat dumplings together. She's also planning to make the damascene milk soup with orange blossom water, something she learned from her mother, who learned how to make it from her mother.

All the extra effort is to make up for the grief she feels about that loss of normalcy. A grief that will feel more acute during Ramadan.

Gone are things like the occasional predawn meal at a 24-hour breakfast spot like IHOP. That's become tradition for a lot of Muslims in the U.S.

Across the country families and individuals are making the same calculations. Mosques and other Muslim organizations are taking their programming online, many are having drive-through iftars for people who depend on the mosque for the daily meal. For the vulnerable in some communities, volunteers are delivering food boxes to homes. Annual fundraisers are also moving online as well as other Ramadan events — from classes about empowered women in Islam to Black Iftar, which started in 2018 to uplift black Muslims and their friends. The website, which reads "ramadan 1441. new year, new format, same intention," references the current year in the Islamic calendar.

In Minneapolis, the mayor is even granting a noise permit so that in one neighborhood residents will hear the call to prayer or adhan broadcast from a loudspeaker. While praying apart people can feel together.

But online and tele-programming for Muslims in the U.S. is a pretty long tradition, especially in communities that feel marginalized within mainstream Muslim spaces or are far away from other Muslims. That's because they are minority communities made up of so many different races and ethnicities with varying practices, says Su'ad Abdul Khabeer, an associate professor of American Culture and Arab and Muslim American Studies at the University of Michigan.

"There are certain things and ways that people have been communicating that haven't been in-person that have already existed," Abdul Khabeer says.

Like dedicated phone lines for prayer in black Muslim communities or people listening to lectures on the radio, tapes, then CDs and now by web streaming.

"Yes, things are different and I think a lot more people are doing that now," Abdul Khabeer says. "But for many groups, particularly groups that are marginalized socially, politically, culturally there has always been a need to have ways to be in relation with each other when you can't actually be in the same place."

Homemade Ramadan cards Sarah Alfaham made for a card exchange she and her friends organized to replace the planned community potluck. Sarah Alfaham/Sarah Alfaham hide caption

Homemade Ramadan cards Sarah Alfaham made for a card exchange she and her friends organized to replace the planned community potluck.

The website she founded, Sapelo Square, will continue the online Ramadan Reflections series that amplifies the black Muslim experience. Abdul Khabeer and her team had plans to hold a big fundraiser in May to commemorate Malcolm X's birthday and the fifth anniversary of Sapelo Square. Instead she's going to make it a Zoom call filled with hip hop artists, poets, singers, jazz and and maybe even a DJ.

Abdul Khabeer hopes the commemoration next month will bring joy at a time of difficulty and grief for so many.

In New York City, at least 60 people from Imam Khalid Latif's community at the Islamic Center at NYU have died or lost loved ones because of COVID-19. Others are sick and so many have lost their means of income. So the focus during Ramadan will be to help with a fundraising campaign.

"As a community, we're coming together on what our religion asks us to [do]. Real principles," Latif says. "I think of ethics and social equity and to just simply do what we can to help others in their time of need."

And what he's most worried about is loneliness. Already, he says, New York is a city of solitude. So not only is programming going online, he and his colleagues are reaching out to people individually to check on them. They're encouraging others to do the same to help people keep that spiritual connection and stave of the loneliness.

At dinner recently Latif says his 4-year-old son looked up and told his parents, "I wish I could just go outside and touch someone."

"My heart was full and my heart broke at the same time, because I could feel this somberness in him. And he's with us," Latif says. "There are so many people right now who are stuck in places where they're alone. Or they might have been in the solitude for the last few weeks with somebody who's abusive...That to me becomes a concern because the entire premise of our community is that we seek to build it in a way where nobody has to feel as if they're by themselves or they have to go through anything on their own."