Accessibility links
Cartoonist Ben Katchor on capturing the lost dairy restaurants of New York City Cartoonist Ben Katchor is probably best known for his comic strip Julius Knipl, Real Estate Photographer, a comic about small businessman who roams the city capturing pictures of a fading ideal of New York. His newest work is called The Dairy Restaurant. It's an illustrated history of the Jewish restaurants that served as a kind of meatless counterpart to the delicatessen. Ben joins us to talk about the dairy restaurants of his youth, what he calls our "pastoral impulse" to find good food, and the first place he's going once he can break quarantine. 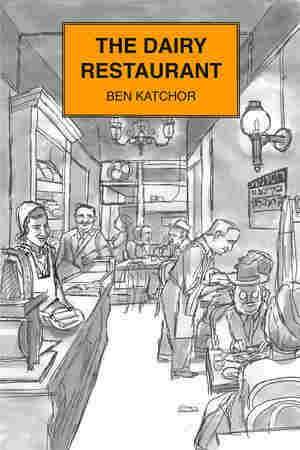 Have you ever been to a dairy restaurant?

It's a kind of Kosher restaurant that serves, well... dairy, for one. But other dishes, too: Kasha varnishkes, borscht, bean soups. But no meat. Many observant Jews avoid mixing meat and milk to keep Kosher, so a dairy restaurant serves a really useful purpose.

But if you're looking for a history on these places, what kind of food they served... you won't really find much on the web. Instead you'll see maybe a few listings for restaurants in your area, some travel guides. But no Wikipedia page, no dictionary definition. It's almost like they... aren't really a thing?

But.. they are. Or were, at least. There used to be a bunch of them in New York City, among other places. As recently as the late 20th century. But cities change, people change. Restaurants come, restaurants go. Ben Katchor, the MacArthur Grant winning cartoonist behind the great strip Julius Knipl: Real Estate Photographer, remembers them. He misses them. And he talks about those places in his newest book: The Dairy Restaurant. It's an illustrated history of dairy restaurants, starting literally in the Garden of Eden, right up until modern times: what dairy restaurants served, what role they played in the larger community, what they mean to the city he grew up in: New York.

The Dairy Restaurant is available to purchase now.