Accessibility links
How To Reopen Closed Schools Amid Coronavirus From shorter days to smaller classes, school will likely look radically different in the fall. 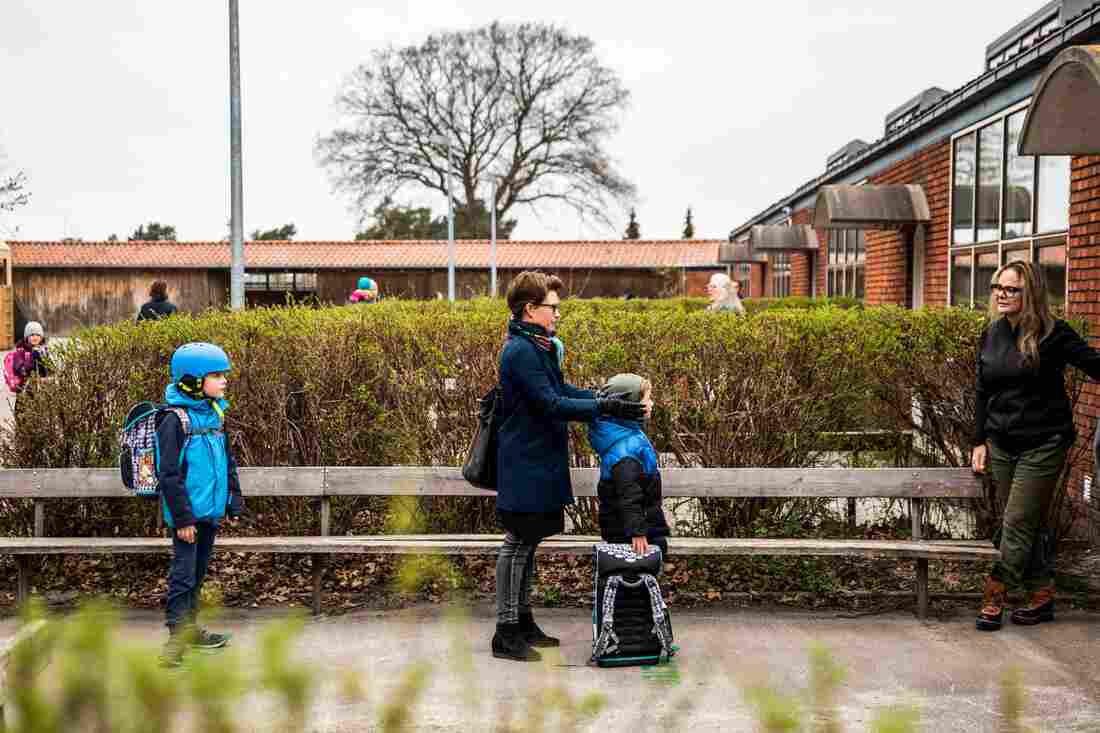 Parents and their children stand in line waiting to get inside Stengaard School north of Copenhagen, Denmark. Olafur Steinar Gestsson/Ritzau Scanpix/AFP via Getty Images hide caption 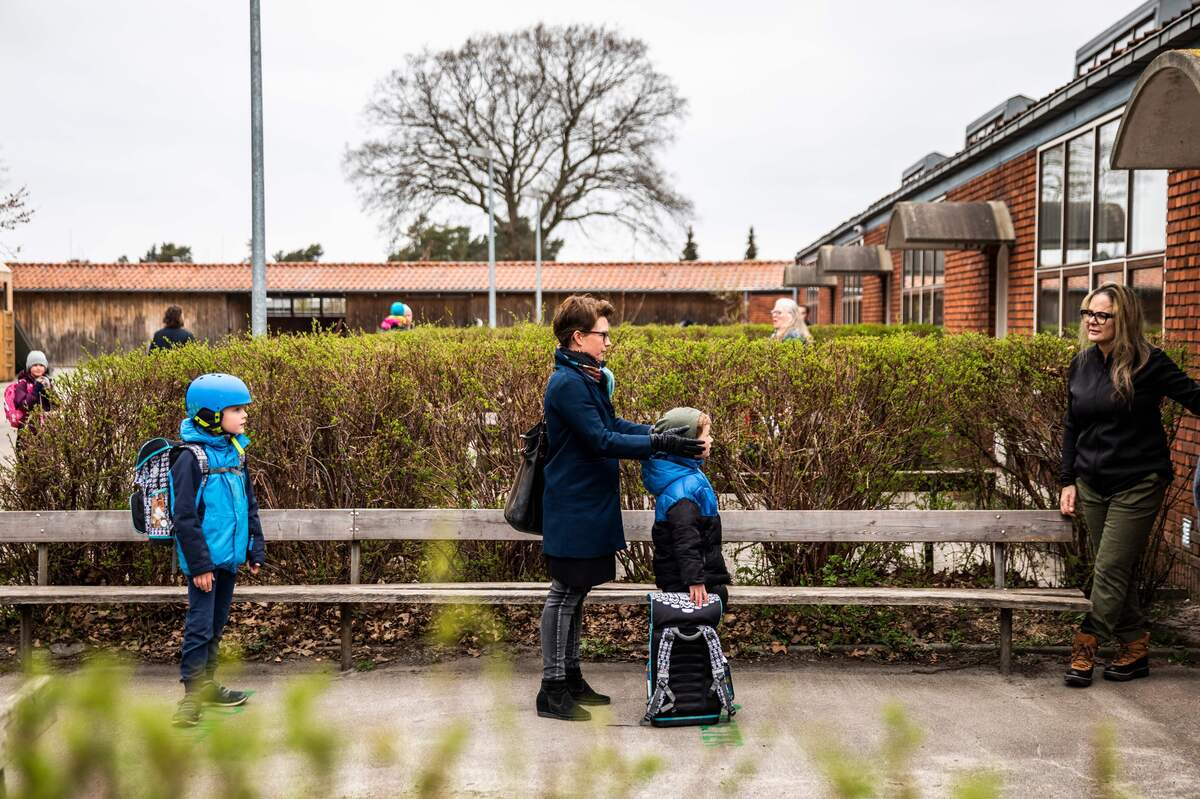 Parents and their children stand in line waiting to get inside Stengaard School north of Copenhagen, Denmark.

Three-quarters of U.S. states have now officially closed their schools for the rest of the academic year. While remote learning continues, summer is a question mark, and attention is already starting to turn to next fall.

Recently, governors including California's Gavin Newsom and New York's Andrew Cuomo have started to talk about what school reopening might look like. And a federal government plan for reopening, according to The Washington Post, says that getting kids back in classrooms or other group care is the first priority for getting back to normal.

But there are still many more unknowns than guarantees. Among the biggest, says Lily Eskelsen Garcia, president of the National Education Association, the nation's largest teachers union, is this: "Is it safe and healthy for my kids to pack them into that classroom?"

Here are nine key ideas — drawn from interviews with public health experts, education officials and educators around the country — for what reopening might look like. 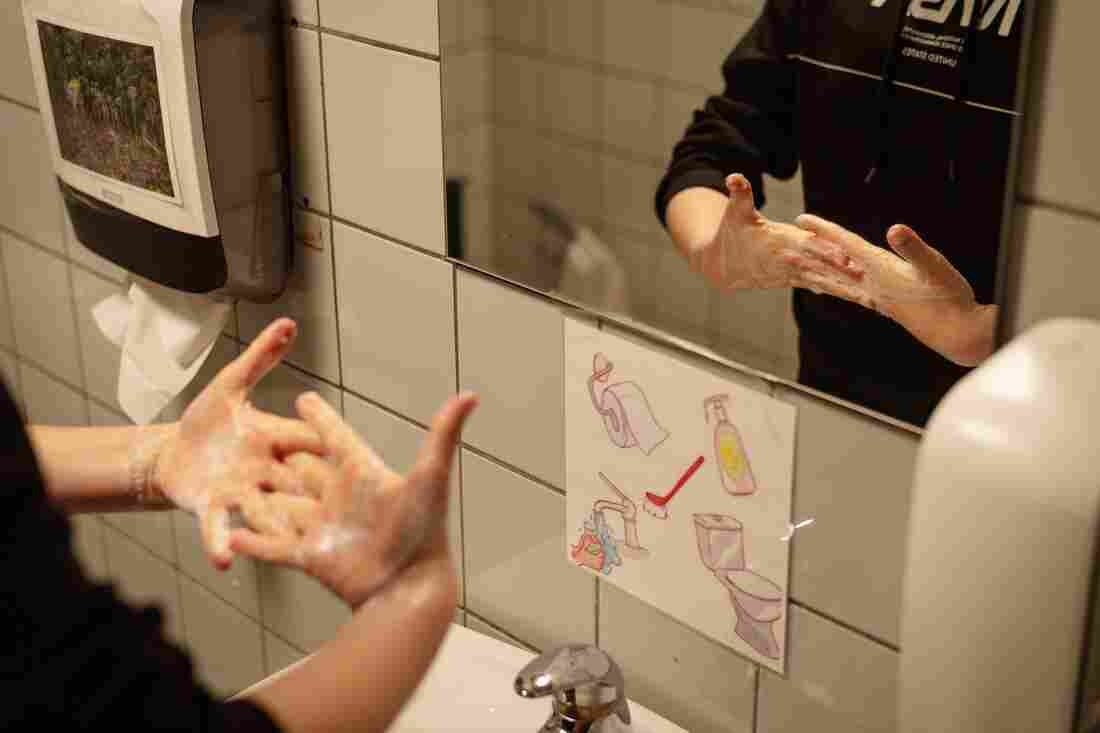 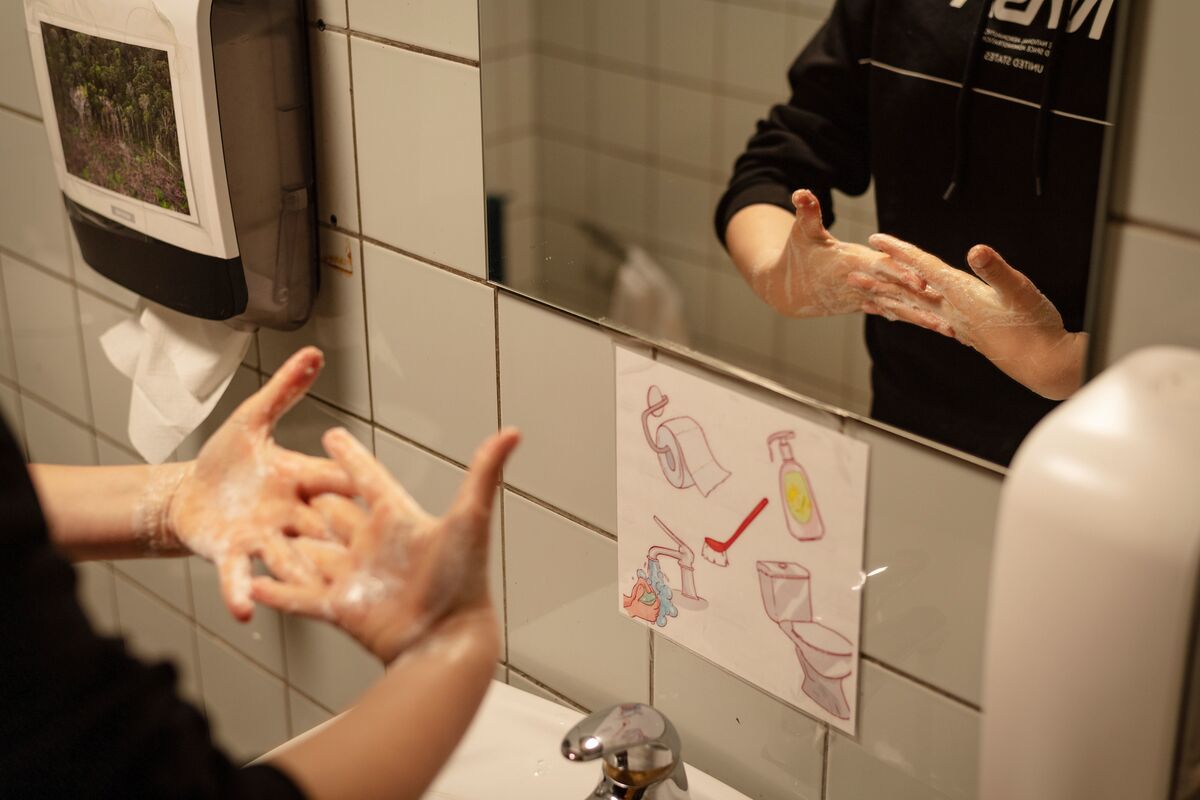 A student practices safe hand-washing at the Korshoejskolen Public school.

"A school building is not what you would call an ideal place in the middle of a pandemic," says Michael Mulgrew, the head of the New York City teachers union, the United Federation of Teachers. So the first order of business, he says, is "How do you make sure there's a plan in place to make sure the people walking in are not spreading anything?"

Ideally, he says, this is accomplished by widespread and frequent testing for the coronavirus. But Mulgrew also points to the safety measures being taken right now at the city's 100 "regional enrichment centers" that provide child care for front-line workers. These include wearing masks, temperature checks, hand-washing, frequent sanitization and social distancing rules enforced even for very small children.

Other countries that are already moving to reopen schools may offer lessons for U.S. educators.

Denmark reopened schools, for lower grades only, on April 15 after a four-week shutdown. At the Copenhagen International School, children line up in the morning next to traffic cones spaced 6 feet apart. There are only 10 students to a classroom, with just one teacher. Specialists, such as the art teacher, offer their lessons remotely via video chat. And just five children are allowed on the playground at a time. Ida Storm Jansen, the school's communications director, says they have made up a new game called shadow tag to play while staying 6 feet apart — "tagging each other's shadow so they're not touching."

Kids are creative, she says: "They figure out ways to do things." 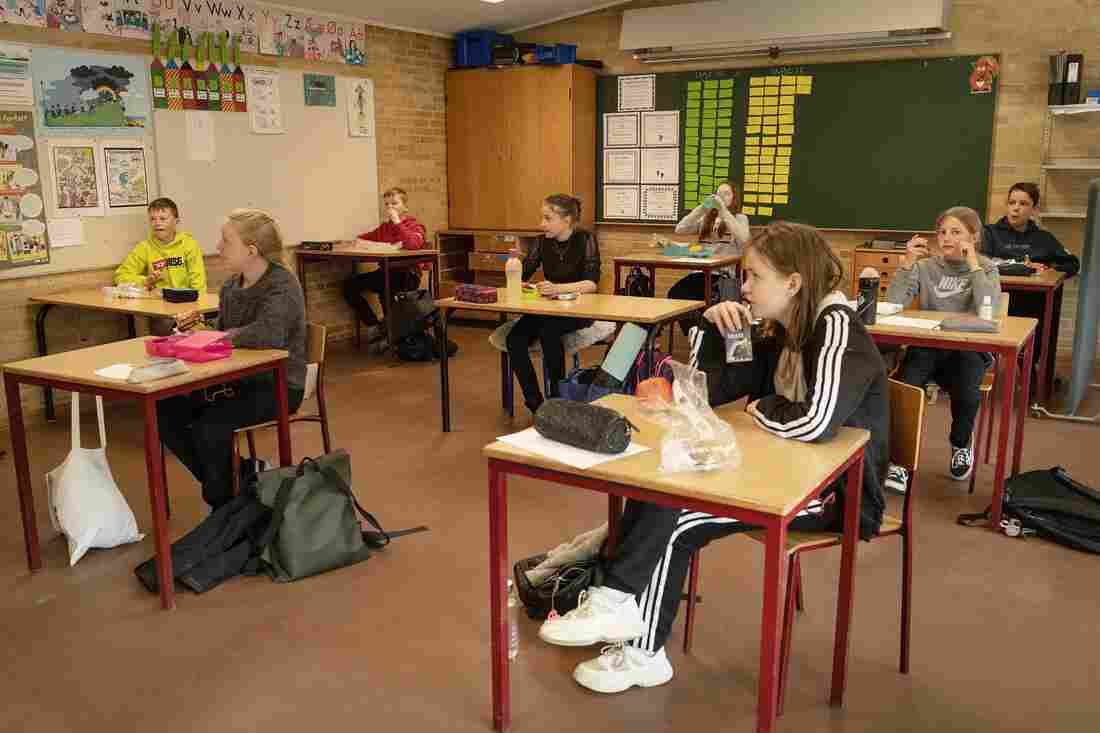 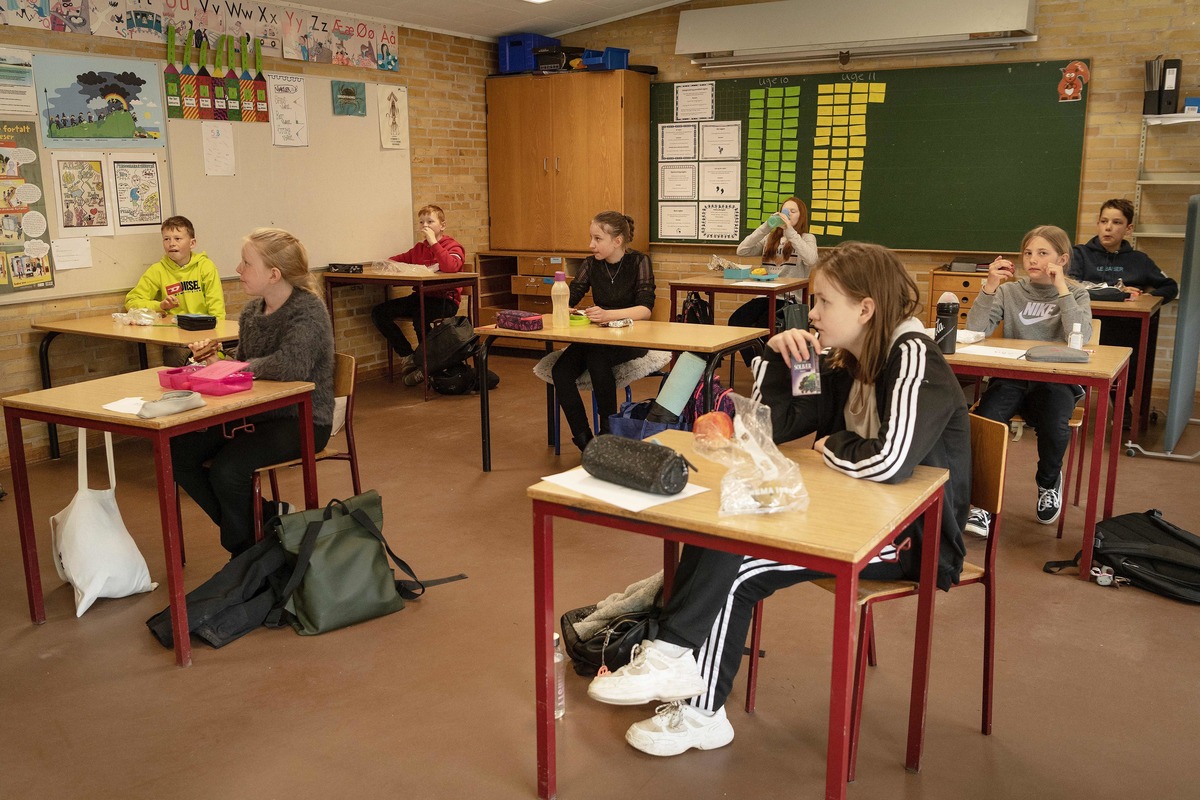 Maria Litvinova, a researcher at the Institute for Scientific Interchange in Turin, Italy, has modeled how school closures reduce the spread of illness. She argues that without treatments or a vaccine, "there is no such thing as 'safe' reopening."

Still, in an attempt to balance safety with the impact on families and the economy, she also recommends reducing social contact by putting children in the smallest groups possible. Assuming there is sufficient testing and contact tracing to reduce the spread of infection, "it's better if that student's been in contact with one group of 15 students versus 100 students."

Based on the typical size of a classroom in New York City, 12 would be the most children you could accommodate while maintaining social distancing, says the UFT's Mulgrew. At the International School in Denmark, they are grouping kids in classes of 10.

Lily Eskelsen Garcia points out that her membership has been asking for smaller classes for a long time. "The doctors say 39 sweaty bodies in a classroom is not healthy and safe — by the way, it never was. But in this case, it might spread an infection that kills people."

Serious cases of coronavirus among children are rare. Eskelsen Garcia says she's concerned not only for the health of children, but also for the health of her members, which include teachers, custodians, food service workers and school support staff. In New York City alone more than 60 educators have reportedly died from the coronavirus, and NPR has found accounts of educator deaths in 13 other states.

Reducing class size this drastically would probably mean staggering schedules. By way of example, Mulgrew suggests that one group of kids might attend school on Monday, Wednesday and Friday one week, then Tuesday and Thursday the following week. Others have discussed morning and afternoon shifts.

Denmark reopened its day cares and primary schools first. Norway started with kindergartens, and Israel with special education kindergartens. Mulgrew says opening New York City's elementary schools first might make sense, because they are more likely to be within walking distance for families, and because those students are normally with one main classroom teacher, meaning fewer changes to existing scheduling and staffing. On the other hand, the researcher, Litvinova, points out that the younger children are more likely to be "putting their hands and their mouths on their face" and, therefore, potentially spreading infection. 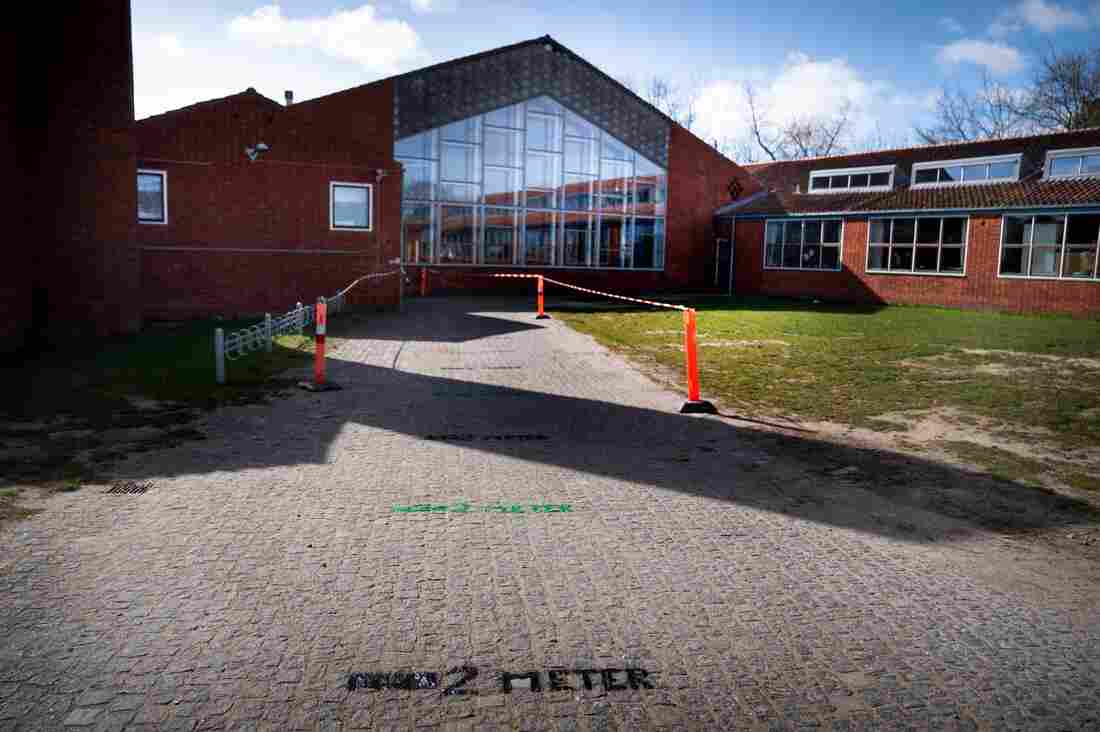 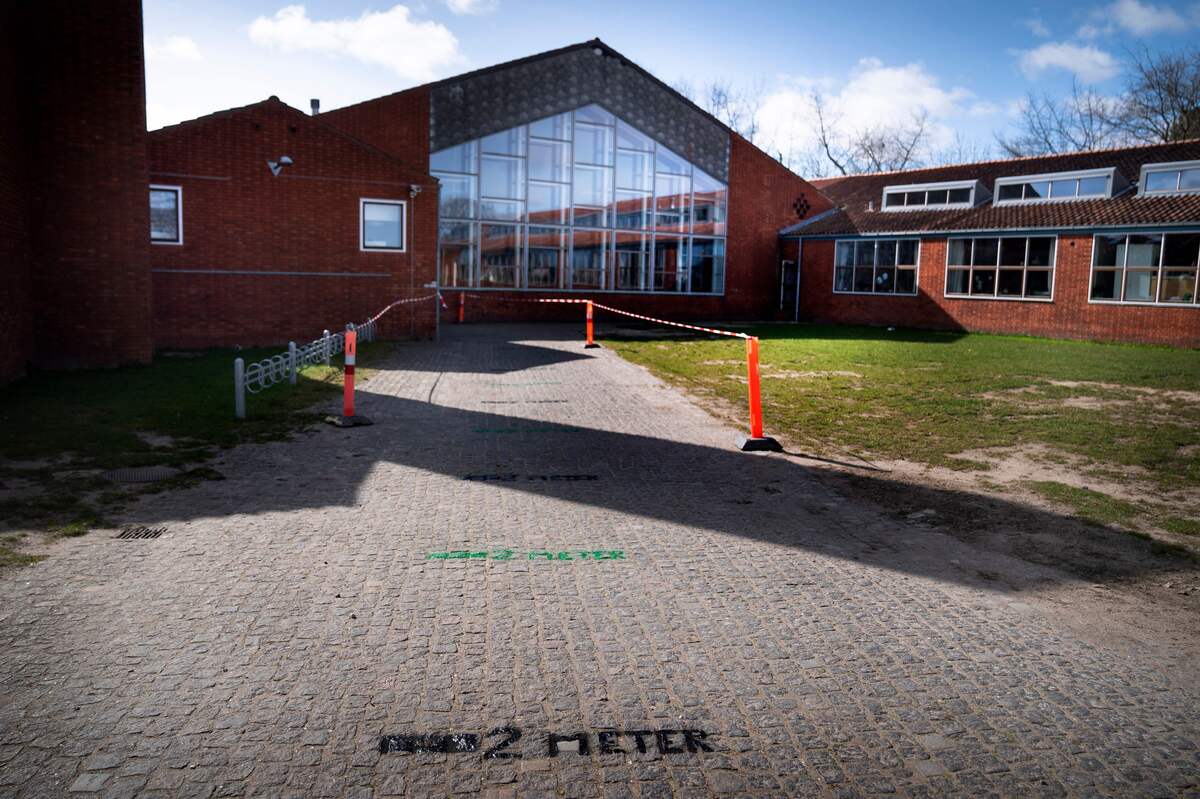 To make up for the learning lost while schools are closed, there have been suggestions of starting school sooner, or continuing through next summer, or both.

"This situation is going to be like what is often called the summer slide, but on steroids," Virginia's superintendent of public instruction, James Lane, told NPR. "I think there will be opportunities for us to discuss different ways to approach calendars." This means, among other things, renegotiating union contracts. And while districts are rewriting calendars, Litvinova says, they should probably prepare for having to close schools again when and if outbreaks recur, until there is a vaccine.

Schools can open up, but some parents might still choose to keep their children at home. In Denmark, a Facebook group called "my kid is not going to be a guinea pig" reportedly has 40,000 members.

Melissa Thomasson, a health care economist at the Farmer School of Business at Miami University in Oxford, Ohio, recently published a paper on the educational effects of the 1916 polio epidemic in New York City. The start of school was delayed by weeks to slow the spread of what was called "infantile paralysis." According to Thomasson's research, even when schools did reopen, about 200,000 of the city's 829,000 registered students stayed home out of fear of spreading the disease. And the city announced a policy of "leniency" for absences during this time.

Students can't mix in large groups, and parents probably won't be allowed in school buildings either.

Every expert NPR spoke with predicted that the need for remote learning would continue because of staggered schedules, schools prepared to close again for future waves of infection, and many students needing remediation. And that means training and support for teachers, and equipment for children.

Eskelsen Garcia of the NEA says the equity issue is acute: "What we've been telling [political leaders] for years is the digital divide is hurting children. It's hurting entire communities. To have broadband, a tablet or a laptop is not to play video games. It is as essential as indoor plumbing. It is what you need to succeed. And now it's been laid bare."

Developmental experts say disruption from the pandemic constitutes an "adverse childhood experience" for every American child. When schools reopen, says Virginia's James Lane, ameliorating this trauma will be at the core of their mission.

"I also think that there is a need for us to focus on social and emotional learning for students," Lane says, "and not only how we can provide the academic support, but how can we provide the mental health support and the wraparound supports for students when they come back, to help them recover and bring back that safety net of schools."