Accessibility links
Navajo Nation Sees High Rate Of COVID-19 The Navajo Nation has the third-highest COVID-19 infection rate in the U.S., after New York and New Jersey. The pandemic is exposing a longtime lack of federal funding for Indian Country health care. 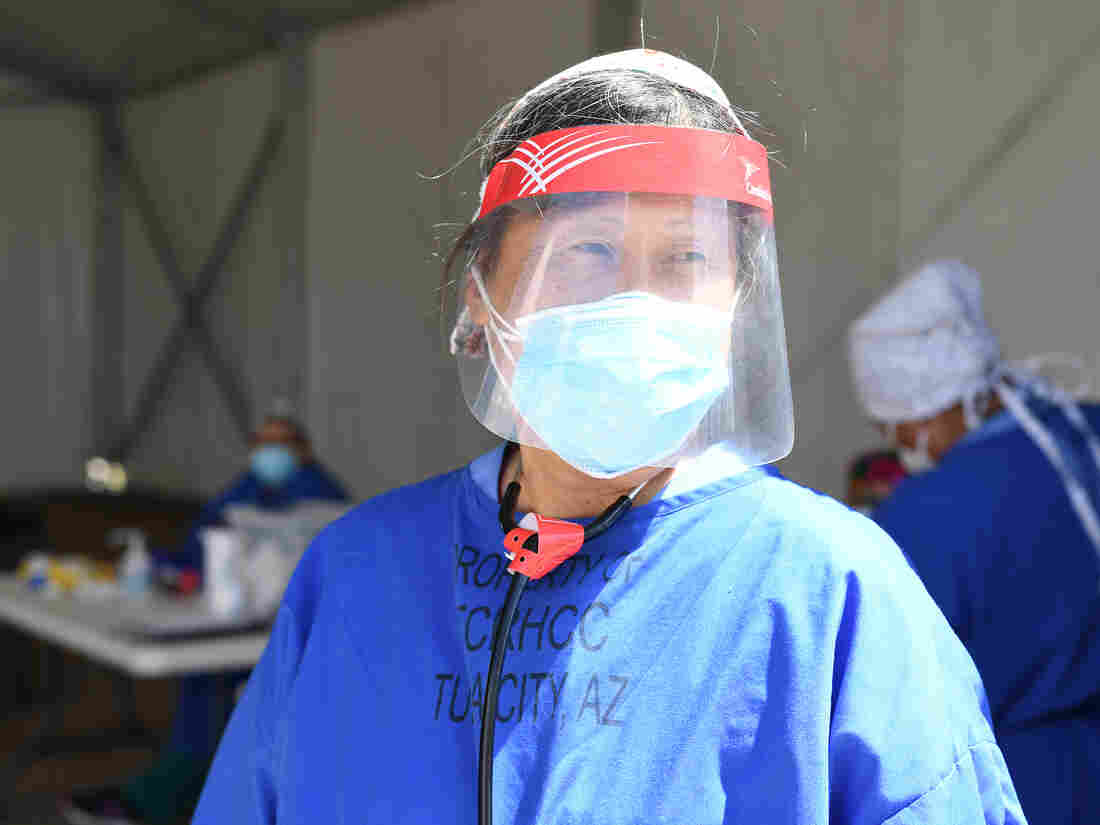 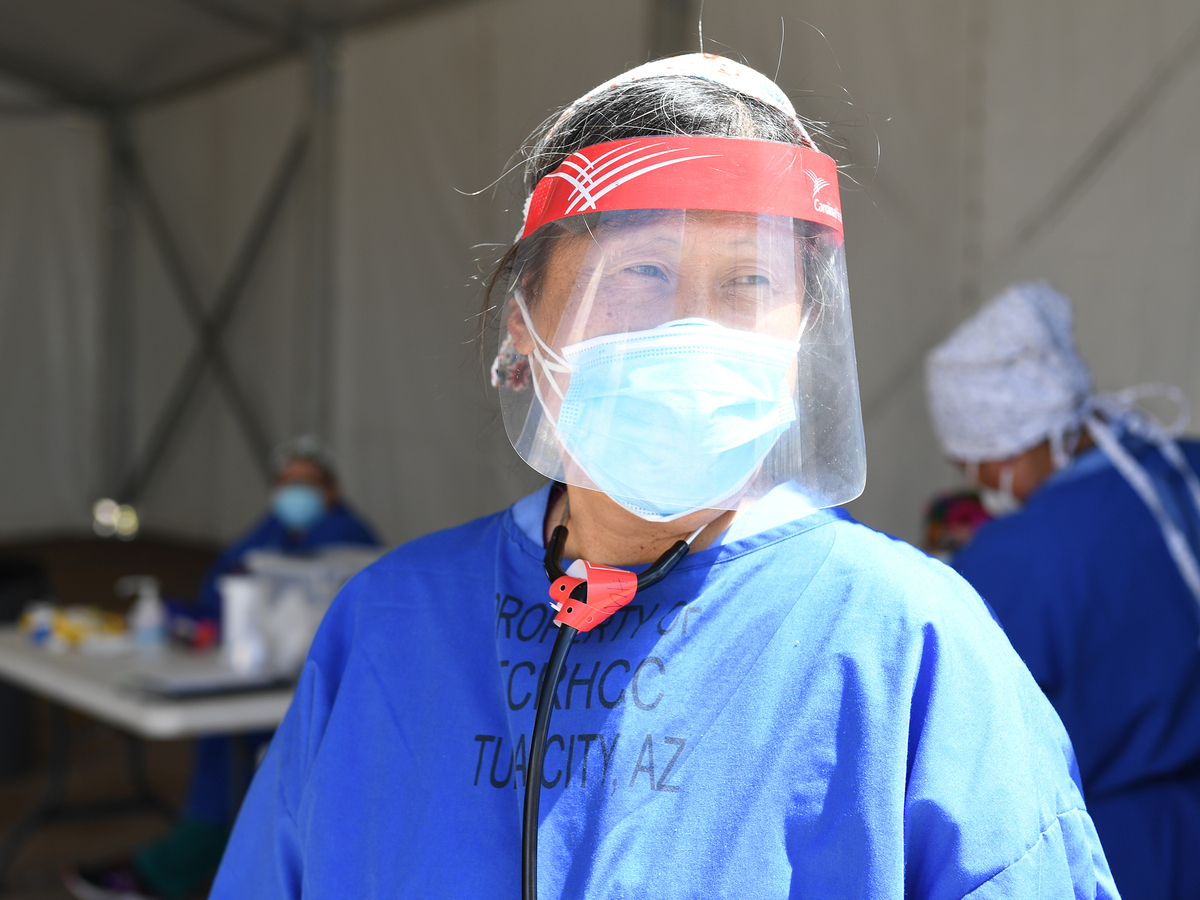 Diana Hu is a pediatrician at Tuba City Regional Health Care Corporation and a member of the Navajo epidemiology response team.

After New York and New Jersey, the place with the highest coronavirus infection rate in the U.S. is the Navajo Nation. Dr. Deborah Birx of the national coronavirus task force told the White House press corps the tribe is using strike teams to address the issue.

"They're really doing amazing work at their public health institutions with their governors and their mayors," Birx says. "They are in full contact tracing."

But contact tracing — or tracking all the people that COVID-positive patients may have infected — has been a challenge on the Navajo Nation.

"We are doing the best we can," says Shawnell Damon, the Navajo epidemiology chief for the COVID-19 strike force. "There are some cases where a number of people have been exposed to some people, and so we're trying to find those people and yeah, that's where the shortcomings come from."

Damon says the tribe has about 80 contact tracers. And they are working hard to do their job. But some realities of life on the reservation make such tracing difficult. Not everybody has a phone, and it takes hours to drive to one home. Damon is trying to train more contact tracers to cover the vast geography and lack of telecommunication infrastructure.

Other long-standing problems have contributed to the rapid spread of the disease on the Navajo Nation. Many households lack clean, running water, which makes frequent hand-washing difficult. Some homes do not have reliable electricity. And hospitals are few and far apart for a reservation the size of West Virginia.

'Forgotten by our own government'

All these issues, the tribe says, can be traced to broken promises.

"We are United States citizens but we're not treated like that," says Navajo Nation President Jonathan Nez. "You can hear the frustration, the tone of my voice. We once again have been forgotten by our own government."

More than 150 years ago, the Navajo and many other tribes signed treaties with the federal government giving up their land in exchange for funding of things like housing, infrastructure and health care. But for decades that hasn't happened.

Now, the Navajo Nation is suing the federal government for what it calls its fair share of federal COVID relief money. On March 25, Congress passed the $2 trillion Coronavirus Aid, Relief, and Economic Security Act, or CARES Act, which includes $8 billion to help tribes fight the coronavirus. The Navajo Nation and 10 other tribes are suing the federal government, arguing they shouldn't have to share these relief funds with for-profit Alaska Native corporations.

The Indian Health Service, or IHS, is responsible for providing medical and other health-related services to enrolled Native American tribal members. But tribes and watchdog groups often point out the money allocated to the IHS is insufficient for the size of the population it serves and the scope of health conditions, such as obesity, diabetes and asthma, prevalent in that population.

"Native American communities are often invisible in terms of their health inequities. When you look at IHS per capita spending, it is much lower than we see for veterans medical spending or Medicare spending," says Dr. Laura Hammitt, the director of Infectious Disease Programs at the Johns Hopkins Center for American Indian Health. "IHS is chronically underfunded."

The IHS works off the motto: Make the best of what you've got, even in a crisis. That's meant converting offices to patient rooms and relying on the National Guard to staff facilities in some cases. But there's still an acute nursing shortage on the Navajo Nation, and the tribe is desperately lacking in equipment. IHS Chief Medical Officer Dr. Loretta Christensen says they're forced to fly COVID-19 patients to hospitals in Albuquerque, N.M.; Flagstaff, Ariz., and Phoenix, which comes at an extremely high cost.

"Our goal is to get our patients to a higher level of care as quickly as possible so that we can get them stabilized," Christensen says. "We do realize there's finite capacity, and that's why we've made plans that we may have to manage many of these patients here on Navajo and we have ramped up that service."

Christensen says the tribe is putting together a critical care strike team. But up until now strike teams have only been used to deliver food and supplies to people who have been exposed to the virus.

"We need this administration to consult with tribes, to listen with tribes, to work in understanding them far more than they do," says Rep. Deb Haaland, D-N.M. The congresswoman is a member of the Laguna Pueblo Tribe, which has also seen deficiencies in federal health care funding.

As sovereign nations, tribes do have the ability to work government to government. For example, the Navajo president is working with New York's governor to get some of that state's unused equipment.

"The big disadvantage, of course, is they don't have a big public health infrastructure themselves," says Hu. "And they've had to learn real quickly. Their learning curve has been quite steep."

And Hu, also a member of the tribe's epidemiology response team, says there are not enough strike teams or contact tracers to get a complete picture of how far COVID-19 has spread on the Navajo Nation.