Accessibility links
Fans Struggle With Ticketmaster, Live Nation And AEG Coronavirus Refund Policies Entertainment companies Live Nation and AEG have modified their refund policies for postponed events. Getting money back would depend on whether a concert or a game has a firm rescheduled date.

Listen · 4:03 4:03
Why Ticket Holders Are Struggling To Get Refunds For Concerts And Live Events 4:03 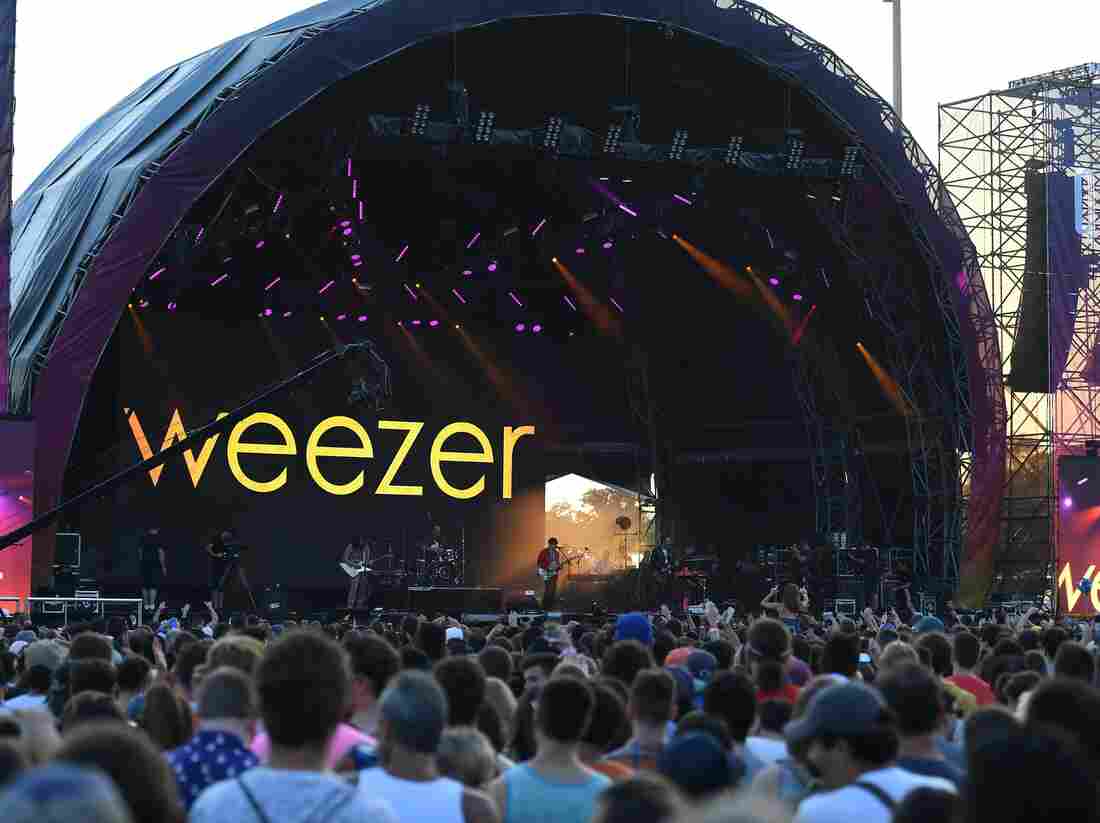 The U.S. leg of Weezer's Hella Mega tour with Green Day and Fall Out Boy has yet to be canceled due to the coronavirus, leaving fans who purchased tickets in limbo when it comes to refunds. Angela Weiss/AFP via Getty Images hide caption 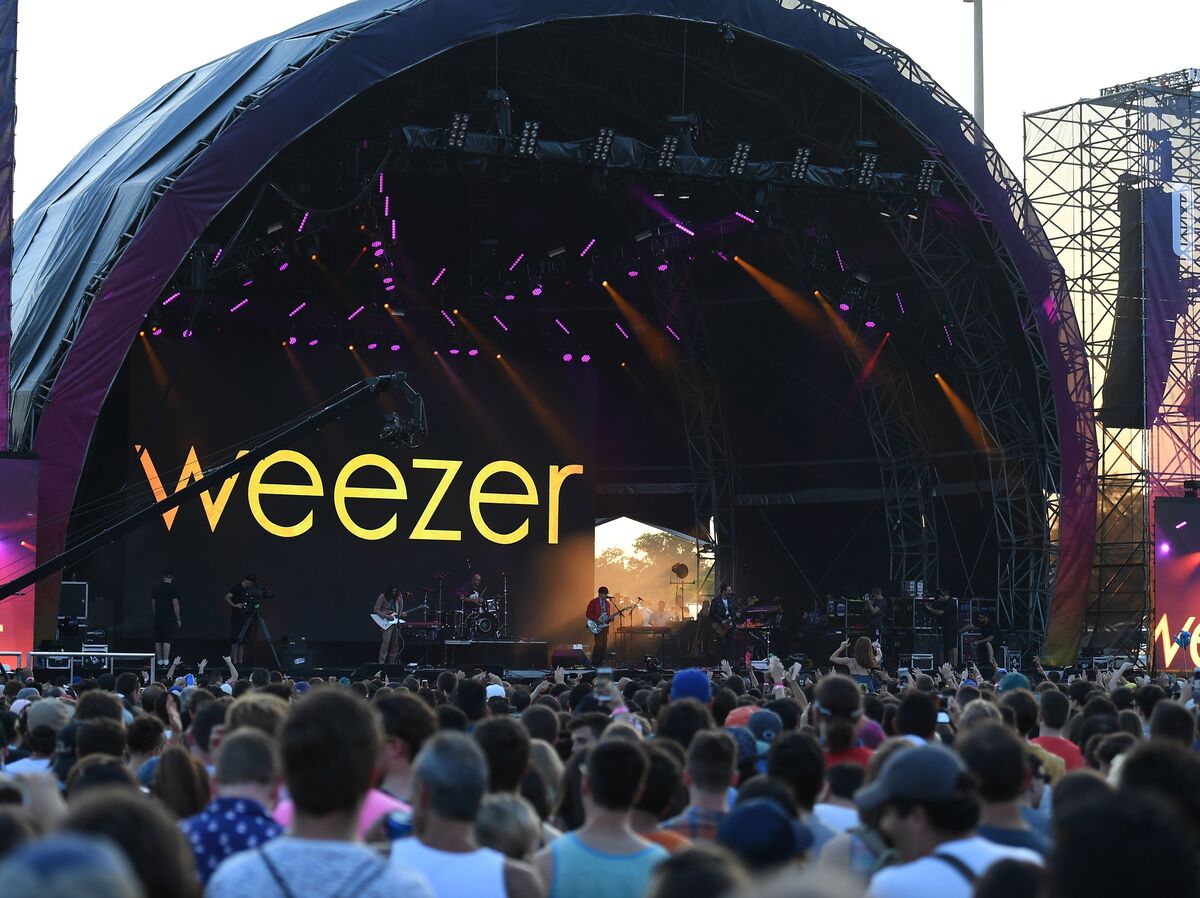 The U.S. leg of Weezer's Hella Mega tour with Green Day and Fall Out Boy has yet to be canceled due to the coronavirus, leaving fans who purchased tickets in limbo when it comes to refunds.

The coronavirus pandemic has completely shut down the business of concerts and other live events. Some people, including Los Angeles mayor Eric Garcetti, are even predicting that live events won't resume until next year.

That leaves ticket holders looking for refunds, but new rules Ticketmaster announced last week stipulate that a show has to be either officially canceled or have new dates announced in order for the purchaser to be eligible for refunds.

Cachelle Cronin, a mental health therapist in Vancouver, Wash., says that before the coronavirus pandemic, she bought tickets for six events through Ticketmaster.

"I've got tickets to Russ, Halsey, [Green Day, Weezer and Fallout Boy's] Hella Mega Tour, Journey with the Pretenders," she lists off the top of her head.

Since none of those shows have been canceled or rescheduled, she's ineligible for a refund. And Cronin bought pairs of tickets to each concert, which means she's out nearly $1000. She says she's thankful she's still employed.

"I cannot even imagine what somebody would be going through right now if they had $1000 in tickets sitting there that they know they're not gonna be able to use, and they're stressing about being able to pay rent, or buy their kids food, or anything like that," she says.

The live event economy is a complicated one, and it's been a struggle for ticket buyers to get their money back because they aren't Ticketmaster's primary concern, says Dean Budnick who, along with Josh Baron, is the author of the book Ticket Masters: The Rise of the Concert Industry and How the Public Got Scalped.

"Ticketmaster really, ultimately, is responsible to its venue clients and those are the individuals it wants to protect," he says.

In other words, its primary business relationships are with concert promoters, stadiums and arenas — not ticket buyers. Before last week, Ticketmaster's website seemed to back off of refunds for postponed events entirely.

"We fully expect the availability of refunds to continue to climb over the next 4-6 weeks and ultimately expect all our clients will make refunds available," Ticketmaster said in a statement to NPR, adding that it has already returned $400 million to fans so far. But Ticketmaster, along with rival company AEG — announced new refund policies last week, which still require a concert to be canceled or officially rescheduled with new dates to trigger a refund. Those policies don't go into effect until May 1.

Dean Budnick says Live Nation and AEG simply don't have the money to give back. "Because contractually, they've released that money to concert promoters, to event producers who put on those events," he explains.

Budnick says with smaller, club level shows, those funds are usually held in escrow, so they're easier to access. But for big shows at stadiums, ticket purchasers' money is already in the hands of venues and artists.

"Now you may say, 'Well gee, that is Ticketmaster's fault because that's their contract that they entered into,' " he points out.

Budnick says over the past few decades, artists have gotten a larger share of ticket sales to make up for declining record sales. That's led to higher ticket prices and more service fees to be shared among the venues and promoters.

Keith Jopling, a consulting director for the media analysis firm MIDiA Research, says that in a post-shutdown world, the deals between all parties in the ecosystem are likely to change.

"Everyone on that value chain will be expected to take a hit on that, including artists," he says.

But right now, it's out-of-work stage hands, food vendors, security guards and ticket holders who are feeling the pain.

Crystal Reilly, a teacher from Michigan, bought Red Wings hockey tickets as a gift for her dad. The game was set to take place last month and she still can't get a refund. With schools closed for the foreseeable future, Reilly says getting that money back is important.

"I'm not working right now. I won't work until September, so having that extra 230 bucks would be really awesome," she says.

Some customers, including Reilly and Cachelle Cronin, are part of a group exploring a class action suit. It's just one such complaint going through the courts now. Elsewhere, others have reached out to their credit card companies to try to get their money back. But either way, they'll be waiting for a while.