Accessibility links
Jon Ossoff Campaigns For Senate In Georgia Amid Coronavirus Three years after losing a high-profile House race, Ossoff is making a bid for Senate in a state at the center of coronavirus controversy, with his notoriety up against Democrats touting experience. 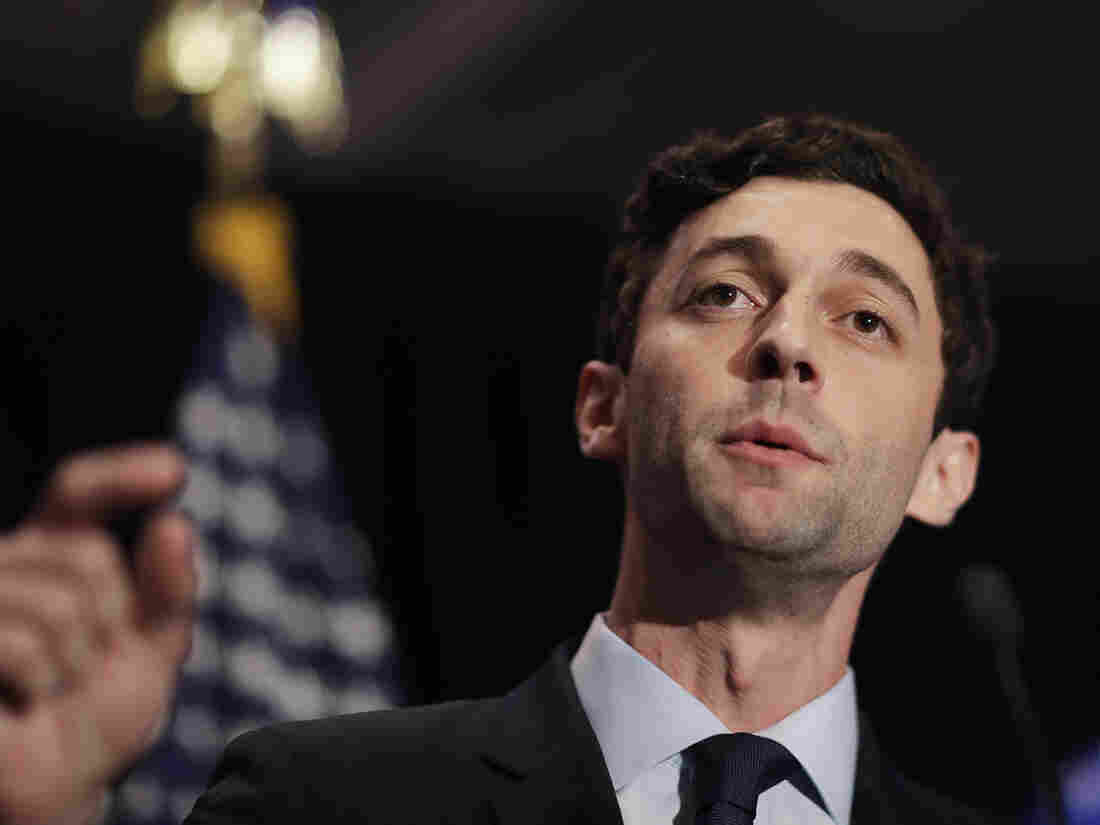 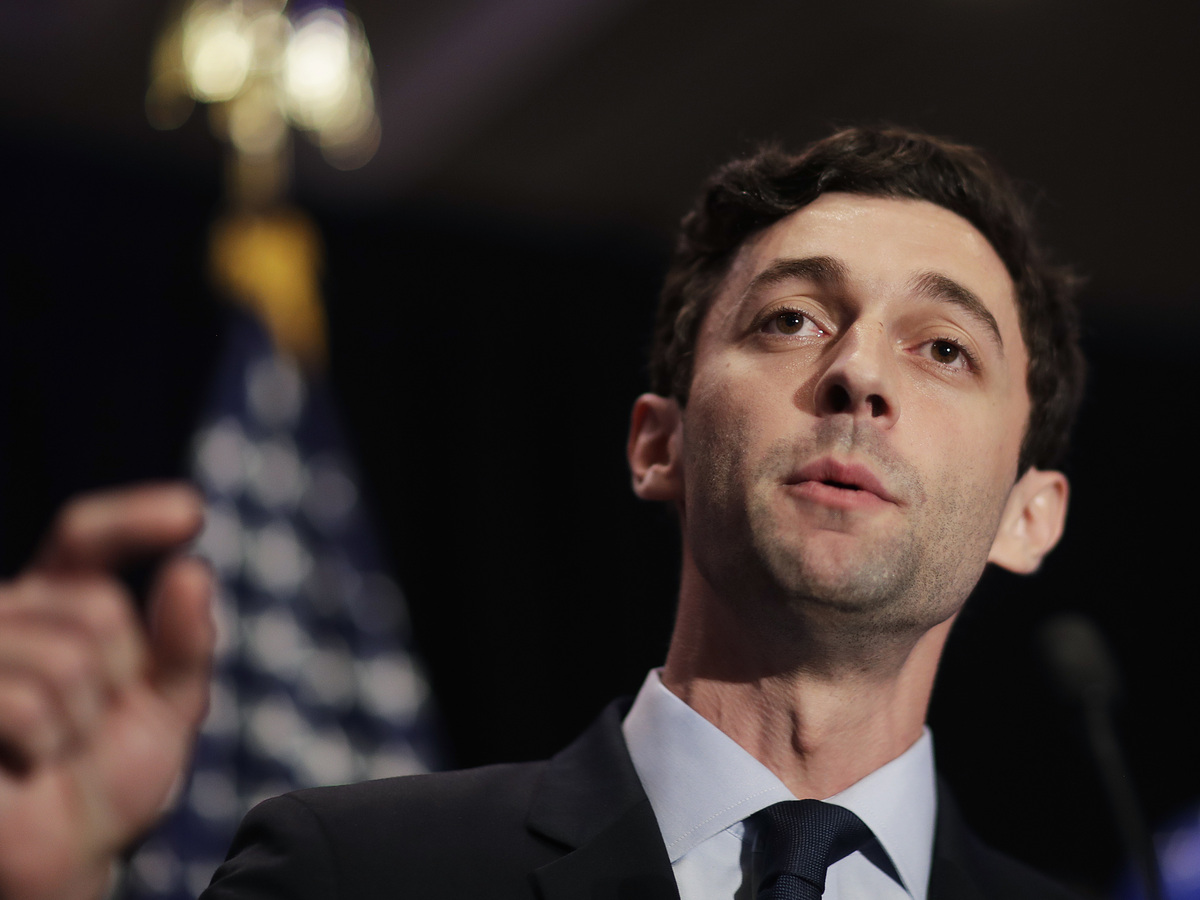 "There is nothing more effective than going door to door and having those face-to-face conversations," Ossoff told over 70 attendees. Since moving his primary campaign online over a month ago, the campaign held several virtual town halls and events with local political organizations.

"So now that we cannot do that, we have to bring that same spirit that we bring to people's doorsteps to conversations that we're having at a distance," he added.

Three years ago, Ossoff ran in a special election in a Republican-leaning congressional district in the Atlanta metro area and lost by less than 4% of the vote. The investigative documentary filmmaker and former congressional staffer received national attention and Georgia Democrats turned out in notably high numbers for an off-year election, one of the very first after President Trump's election.

More money went into the 2017 Georgia special election than ever previously recorded in a congressional U.S. House race and it maintains that title today. Ossoff's campaign raised over $30 million and his opponent, Karen Handel, raised nearly $9 million.

Ossoff has higher national name recognition and more money in comparison to his Democratic competitors — bringing in $3.4 million total as of March 31 — but rousing momentum similar to what his congressional campaign did three years ago poses difficulties during the COVID-19 pandemic.

"It's unusual and it's a challenge adapting a political campaign to this moment. But that pales in comparison to what so many people are going through," Ossoff told NPR.

Georgia has also become the subject of a political and public health debate following Gov. Brian Kemp's executive order to allow selected businesses to reopen — a move that President Trump and public health experts disagree with.

Georgia has not met the White House guidelines of having a two-week descending trend in cases before opening businesses. On Friday, businesses including gyms, bowling alleys and hair salons are able to open, and on Monday, theaters and sit-down restaurants are permitted to as well. Though the state's stay at home order remains in place until April 30.

All three Democratic Senate candidates have opposed Kemp's decision: Amico called it "reckless endangerment," Tomlinson referred to it as "premature," and Ossoff singled out Perdue, asking him to "reject Kemp's incompetent policy."

Perdue addressed Kemp's decision in an interview on Friday. "I applaud the fact that he's stepped up to a reality that we are going to have to phase in reopening the economy," the senator said, "and what he's done so far, from what I can see, is a measured approach to doing that." In the interview, Perdue also said he agreed with Trump's guidelines.

Despite the limitations posed by the coronavirus pandemic, Ossoff views campaigning during this time as a two-part obligation.

"What I'm doing is simultaneously getting the word out there about what people need to do to stay safe and slow the spread and also resolutely pointing out how, where and why our leaders have failed to wrap their heads around this crisis swiftly enough," Ossoff said.

The campaign's first TV ad aired Tuesday, praising health care workers including Ossoff's wife, Dr. Alisha Kramer, who is an Emory Healthcare OBGYN resident. In the ad, Ossoff takes aim at insurance and pharmaceutical companies, saying they have "bought off Congress," and pledges to better the health care system.

More than half of Ossoff's $3.4 million remains in cash on hand heading into the primary. His competitors are not as well-funded. While Tomlinson has raised $2 million in total and Amico has raised $1.4 million, both candidates had less than $500,000 on hand according to the most recent figures from March 31.

Despite Ossoff's financial edge, his spotlight remains small as a result of the crisis, according to Emory University political science professor Andra Gillespie.

"While Ossoff has certainly amassed an impressive fundraising lead among Democrats, it must be frustrating to him that he won't get the normal amount of earned media because of the pandemic," Gillespie said.

Tomlinson, who is the only Democratic candidate to have previously held elected office, argues that the coronavirus pandemic has made her candidacy more appealing because voters "are much more concentrated on electability and seriousness."

The former Columbus, Ga., mayor and public safety director has been holding virtual events daily, sometimes with multiple events in a day.

"I think people have often equated politicians and electability with celebrity these last couple of cycles, and this time it's very different," Tomlinson said. "They're less about any splash and pizzazz, which of course, it's harder to convey virtually anyway."

Tomlinson says that while her campaign had their strongest fundraising quarter to date and remains on track for the primary, donations may have been limited due to the crisis.

"Clearly we would have done better without the coronavirus. I suspect that that was a, you know, a couple hundred thousand-dollar hit to us. But I know all campaigns were probably suffering the same type of setback," Tomlinson said.

For candidate Amico, the actual act of asking for donations has become harder.

"It almost feels uncouth to call and ask people for large checks when they're in the middle of a pandemic," Amico said. "At the same time, the present crisis has highlighted the need to flip the Senate."

Amico argues that her business experience proves useful during the current economic crisis. "I know what it takes to create great-paying jobs with great benefits that take care of working families in the middle of a very difficult economy," she said.

Outside of fundraising, Ossoff also surpasses his Democratic and Republican competitors in engagement over social media.

At the end of March, the campaign posted a video of Ossoff and his wife, Dr. Kramer, giving public health tips. The video has since reached close to 100,000 views across social media platforms, as of early April.

To stay healthy & SAVE LIVES:

But Gillespie argues that Ossoff's online popularity is not a direct sign of support among the Georgia electorate.

"One of the reasons why Jon Ossoff has such a strong social media following is in part because of what he accomplished during his 2017 campaign, but it's also a function of the fact that he's a millennial and, you know, is more of a digital native than perhaps his competitors are," Gillespie said.

The only public poll so far from the Atlantic Journal-Constitution in March showed Ossoff leading with 29% of likely Democratic voters followed by Tomlinson at 15% and Amico at 14%. Notably, 37% remained undecided, a stat that has left the path open for both Tomlinson and Amico.

"[Ossoff] got a lot of attention for that congressional district race. But the reality is, you know, he still has the build name identification outside of metro Atlanta," Gillespie said.

Georgia is the only state in the country to hold two Senate elections this year. A special election will be held alongside the Perdue race this November, due to the retirement of Sen. Johnny Isakson at the end of 2019.

Perdue is running as an incumbent with no Republican challenger in June.