Accessibility links
Review: 'Girl Gone Viral,' By Alisha Rai In Alisha Rai's latest, a former model escapes unwanted viral fame by hiding out with her bodyguard, on his family's peach farm. It's packed with humor, drama — and a pair of very sexy eyebrows. 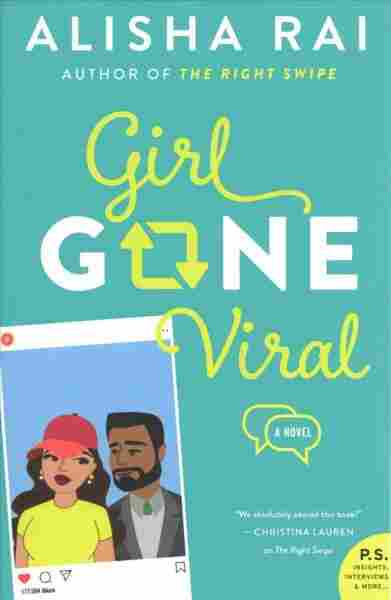 Alisha Rai's Girl Gone Viral tackles the grimy underbelly of social media with humor, satire, pathos, a great deal of family drama, and a positively sizzling romance (also, what may be the best pair of sexy eyebrows in Romancelandia).

These days self-isolation is the norm for many of us, and a good book is an escape that helps us navigate the hours (the many hours) of new-found time. Ironically, Rai's newest romantic comedy has a lot to do with avoiding people, places, emotions, and family at all costs. We get it, too — protagonists Katrina and Jas make us believers; we're on board with the reasons why they can't commit to each other. But we also cheer (rather loudly) for them to find the happy-ever-after they both deserve.

Girl Gone Viral is the follow-up to Rai's hit The Right Swipe — and yet again, the Internet serves as the backdrop. Katrina King is our reclusive heroine. A former model with an abusive father-manager, she escaped by marrying a kind, wealthy, much older man, who's left her a widow when the book begins. Still, she's living her best life, far away from the limelight — and that's where she wants to stay, private and out of the headlines. But then a social media post about her goes viral, landing her in emotional and physical danger. Her panic disorder means this new, unwanted fame is the worst kind of news — and to make matters worse, the post isn't even true (which hasn't stopped others from capitalizing on it).

She and her bodyguard, Jasvinder Singh (owner of the eyebrows, by the way) decide to flee her home base for an isolated haven, which happens to be on the property of his family's peach farm.

Protagonists Katrina and Jas make us believers; we're on board with the reasons why they can't commit to each other. But we also cheer (rather loudly) for them to find the happy-ever-after they both deserve.

Speaking of Jas, he earns his hero chops in spades. He's strong, silent, and he'll do almost anything (sometimes to his own detriment) for his client. Anything except carrying a gun, that is — a leftover from his traumatic past. Jas was once a soldier who served in Iraq, and he's an expert at keeping his vulnerabilities hidden, not only from his client but also from his family. And for the past nine years, his role (and seemingly only goal in life) has been to protect Katrina.

So, as you can tell, Katrina and Jas are peas in a pod: Lots of angst to keep them apart but plenty of tropes to glue them together. But where does the romantic comedy come in?

It comes from Katrina and Jas themselves. Their worldviews (and the author's voice) make for numerous laugh-out-loud moments, and a romantic comedy where the funny works because the characters are working on the page. We understand them and their motivations, their fears, their hesitancy to give in to love. We also understand why they aren't wallowing in self-pity because of the traumas they've survived.

The story is trope-heavy, however: Forced proximity, secret crushes, office affairs, lovers from different worlds, flirting under fire — you get the drift. There's also a moment early on when the romance teeters on the tightrope of "why don't you two just talk to each other?" But Rai astutely adds a fresh layer of complications whenever that feeling surfaces, keeping us turning the pages. Often those layers come in the form of one of Jas's family members. His stepbrother Bikram, for example, is a treasure: The foreman of the Singh family peach farm, he's 25, rides a horse, and his general attitude toward his big brother is mature and hilarious.

The story is set in Yuba City, Calif., and Rai includes some historical facts that add a feeling of authenticity — always an appreciated addition to story-telling. The Singh family is Punjabi American, mostly, but with Mexican ancestry. The relationship between Jas and his grandfather, Andrés, known as the Peach Prince of Yuba City, is wonderfully crafted — and rooted in real history. Jas's great-grandfather married a Mexican woman during the era of the Immigration Act of 1917, which barred Asian immigrants to the United States; California laws at the time also made marriage outside your own race difficult. Andrés explains this to Katrina, describing the relationship between his parents as one of "compromise and love." Which is a pretty good summation of Rai's theme here.

Girl Gone Viral is a fun, addictive romance and when the layers kick in, it's a page-turner you won't put down. (No spoilers, but the ending delivers on the story promise with a solid twist.)

And by the way, don't be surprised if by the end of this book journey, you add eyebrows to your list of thirst-worthy features. Just sayin'.