Accessibility links
Rich And Poor Churches Benefit Differently Under SBA Loan Program With the vast majority of U.S. churches closed and the country in a deep recession, church finances are in peril. Some are seeking government money through a new SBA program. 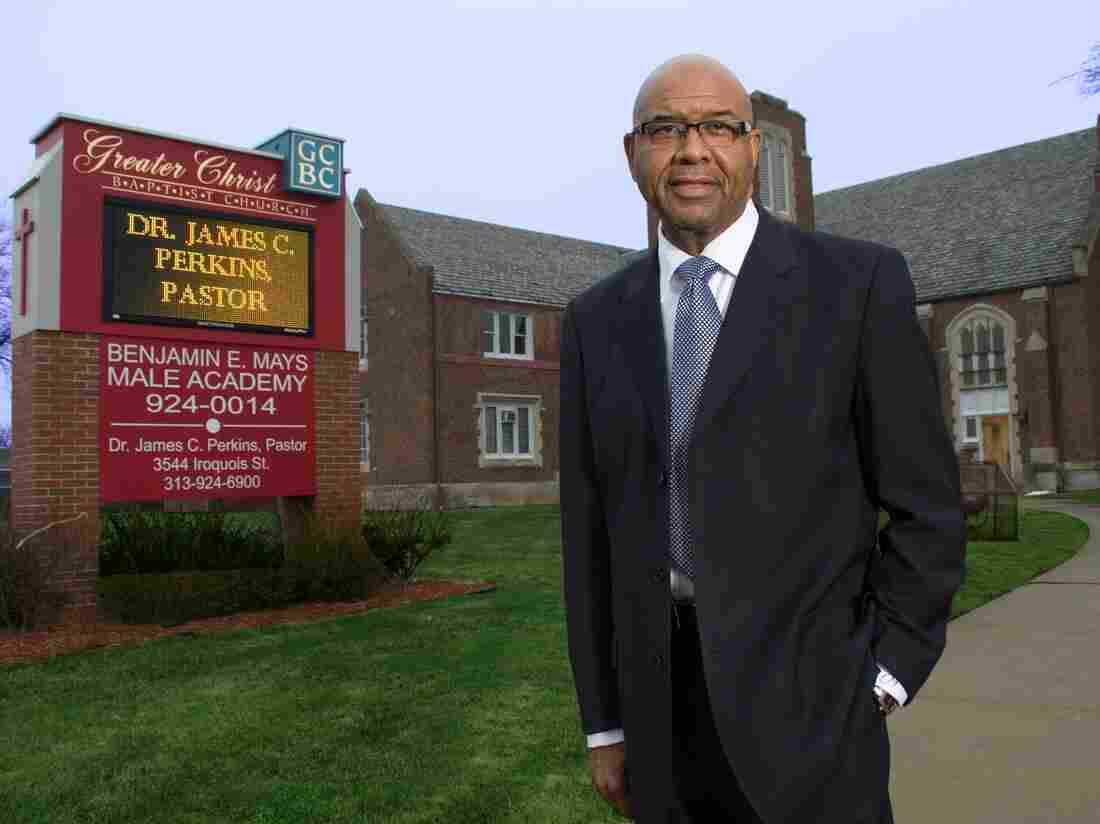 Rev. James Perkins of Greater Christ Baptist Church is one of several black pastors in Detroit who were unsuccessful in their SBA loan applications. Courtesy James Perkins hide caption 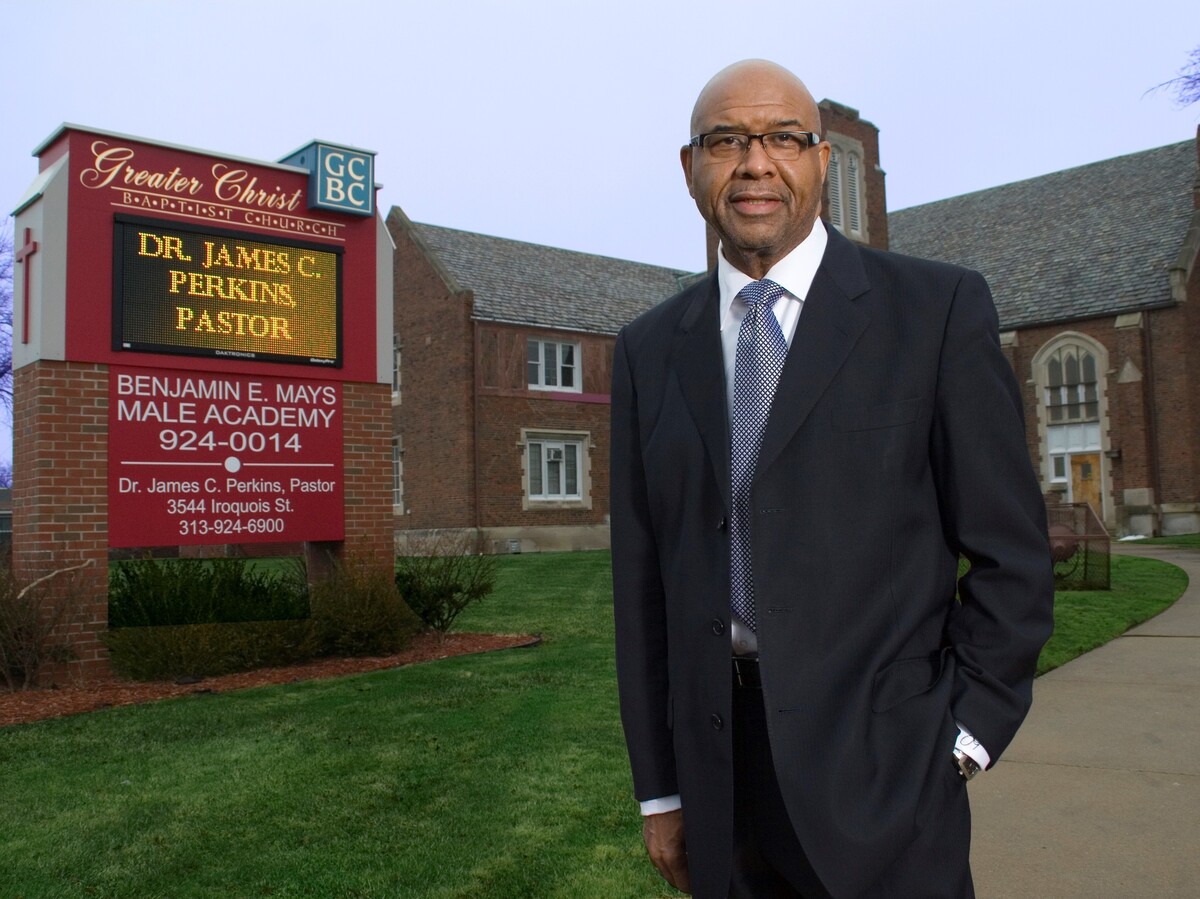 Rev. James Perkins of Greater Christ Baptist Church is one of several black pastors in Detroit who were unsuccessful in their SBA loan applications.

A new government program that funnels taxpayer money to churches, synagogues and mosques has brought welcome relief to some financially stressed houses of worship, while leaving others — many of them serving communities of color — still struggling to survive.

"It's a huge boon for us," said Father Carl Beekman, parish priest at the Church of St. Mary, which serves about 1,300 families in Sycamore, Ill. Beekman learned this week that his church will receive a loan under the Paycheck Protection Program administered by the Small Business Administration.

With that assistance, part of a coronavirus rescue package enacted by Congress, Beekman does not anticipate that any parish employees will have to be furloughed, even though money collected through church offerings is down significantly as a result of being closed.

Thousands of churches around the country are benefiting from the program, though the SBA is not releasing precise numbers.

"I was a little surprised that nonprofits and churches could take part," said Paul Ott, chairman of the administrative council at Grace United Methodist Church in Dallas, Texas, which was approved for a PPP loan of about $52,000. If the program rules are followed, the loan will not have to be repaid.

"This was very helpful to us," Ott said. "[This year] was not going to be a good year for us. We knew we were going to be in real trouble."

Less fortunate was Greater Christ Baptist Church in Detroit, which has a predominantly African-American congregation.

"We applied when the program first became public, but we did not receive any funding," said Rev. James Perkins, the church pastor. As a consequence, Perkins has had to lay off most of his nine church employees, and he has asked the remaining staff to take salary cuts. His experience was shared by other black pastors in Detroit and across the country.

"I haven't taken any scientific survey, but a number of black pastors with whom I have relationships in Detroit are concerned, because they did not receive funding," Perkins said.

Among them is Rev. Kenneth Flowers, pastor at Greater New Mount Moriah Missonary Baptist in Detroit.

"We tried to submit an application to our bank, but they kept saying they were not ready," Flowers said, "and then we got an email saying all the funds have been deployed. We're discovering that there's a pattern here of minority businesses and black churches not receiving the funds."

"We have representation from all of our nine major African-American denominations," said Derrick Johnson, president and CEO of the NAACP. "Most of them have complained about the lack of responsiveness from the banks to which they have submitted applications. These are churches from San Francisco to Detroit to Florida to Connecticut. We hear a consistent concern from church leaderships across the country."

In all, the SBA approved nearly 1.7 million PPP loans. No data have been collected that would indicate a racial disparity among the successful recipients. The New York Times and Wall Street Journal have both reported that large enterprises with established connections to big banks were far more successful than were small businesses — or churches — with less experience dealing with financial institutions.

The largest SBA lender, JPMorgan Chase, approved about 27,000 loans out of about 300,000 applications received. The bank serves several churches and other religious institutions in the New York City area that were unsuccessful in their loan applications.

The Metro Industrial Areas Foundation, a network of community organizations, identified 28 churches, two synagogues, and a mosque that were among those unsuccessful in their application. The bank has since begun working with the institutions to assist them in applying for loans in the next PPP installment.

"We received about 75,000 applications in the first hour of the form going live," said Anne Pace, a Chase spokesperson. "[We] served clients as they came to us, and no business or client segment was prioritized over another." About 60% of the loans went to clients with fewer than 25 employees, according to the bank.

Those enterprises that were well organized and in strong positions to apply, however, were clearly at an advantage.

"You had to have your paperwork ready and your payroll verified," Pace acknowledged. Banks also gave priority to those customers with whom they already had banking relationships. "A bank needs to know who the customer is."

Such factors could explain why well-resourced churches with strong institutional support and good connections have been more successful in getting PPP loans through the SBA.

Another Break From The Past: Government Will Help Churches Pay Pastor Salaries

Another Break From The Past: Government Will Help Churches Pay Pastor Salaries

The successful loan application submitted by the Church of St. Mary in Sycamore, Ill., was actually prepared by the financial officer for the Rockford Diocese, to which the parish belongs. The officer prepared loan applications for all the parishes in the diocese that wanted to take part in the program.

Of the approximately 17,000 Catholic parishes across the country, about 8,000 applied for PPP loans, according to Pat Markey, executive director of the Diocesan Fiscal Management Conference, an association of diocesan financial officers. As of April 17, about 20% had been approved, according to Markey, and more were notified in recent days.

"I haven't heard any major complaints," Markey told NPR. "But if they're going to complain, they probably don't call me."

At Grace United Methodist in Dallas, the administrative council, a lay group, prepared the church's PPP application after it was alerted to the opportunity by the church's district superintendent, who outlined the application process and advised the church what it could apply for. Much of the application was prepared by the council treasurer, a retired attorney and Certified Public Accountant.

Many churches in low income communities of color lack access to such support, but have greater financial needs.

"If the needs can be met in other ways, they should not apply," Markey said. "As Christians, we don't just take money because it's available. If there's not a real need, it's not ethical. You can't take funds away from the small pizza place down the street just because it's available and you have more access to them."