Accessibility links
Interview: Witold Szabłowski, Author Of 'How To Feed A Dictator' For his new book, Witold Szablowski tracked down the chefs who fed autocrats like Pol Pot, Enver Hoxha and Idi Amin. He says the book isn't just about food, but about how dictatorships rise and grow. 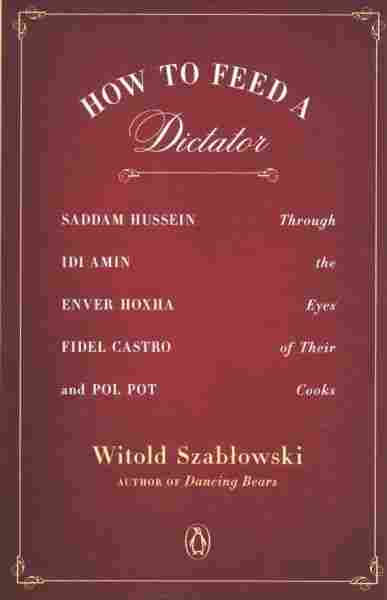 How to Feed a Dictator

Idi Amin, Fidel Castro, Enver Hoxha, Saddam Hussien, and Pol Pot. Sure, they were ruthless leaders — but more importantly, what did they eat?

In the new book How to Feed a Dictator, journalist Witold Szablowski tracks down the chefs who served these five men, to paint intimate portraits of how they were at home and at the table.

"When I read about Pol Pot, when I was researching for the book, I read somewhere that he liked the heart of cobra," Szablowski says. "So I felt like this is the very dictatorship-ish story. But then I went to the chef and she told me that it never happened. He didn't like the snakes, like, he was eating chicken and fish."

It was the hardest one. Firstly, to find and secondly to talk with ... he was terrified because they thought that when the American troops come to Baghdad, he was afraid of being taken to Guantanamo, tortured and maybe executed, or having some other troubles. But then hiding became part of his DNA. And even when my great Iraqi fixer managed to find him, he didn't want to talk. Like, he didn't dream about some weird guy from Poland finding him and making him speak.

On the life of a chef to someone like Saddam Hussein

I think you can say that the chefs, usually they have amazing perspective. Like, they are very close, but at the same time, they are the guys who could possibly poison the dictator. So it's a tricky position. You are a mother and an enemy at the same time. So Saddam was not good for Iraqi people and for the world, but he had this instinct to treat his personnel well ... And the chef is mentioning the expensive gifts he has got from Saddam. Gold watches, and he had new clothes. But it was always a tricky position. It was always a dangerous job.

On the dangers of being Idi Amin's chef

So once the son of Idi Amin had some stomach problems, and immediately Amin came with his pistol to the kitchen, and took the first chef that was working right after the door, put a gun into his head and said that "if the kid dies, I'm going to kill all of you." And those people were scared — like, they had very good salary and ... an access to food in the countries where there were a lot of hungry people. But at the same time, you could have been killed at any moment.

On what we can learn from these stories

I believe that, generally, it's not only a book about the recipes for dictators and for the food they like, but it's also a kind of recipe for the dictatorship. Like how exactly, step by step, is the dictatorship born and raised? Like, check how they get to power, and let's try to prevent that to happen.

This story was edited for radio by Ian Stewart and Kitty Eisele, and adapted for the Web by Petra Mayer.