Accessibility links
Public Health Labs Suffered Budget Cuts Prior To The Coronavirus Pandemic An APM Reports analysis finds that public labs — the first line of defense in an outbreak — in at least 10 states endured budget troubles or staffing shortages in the past decade. 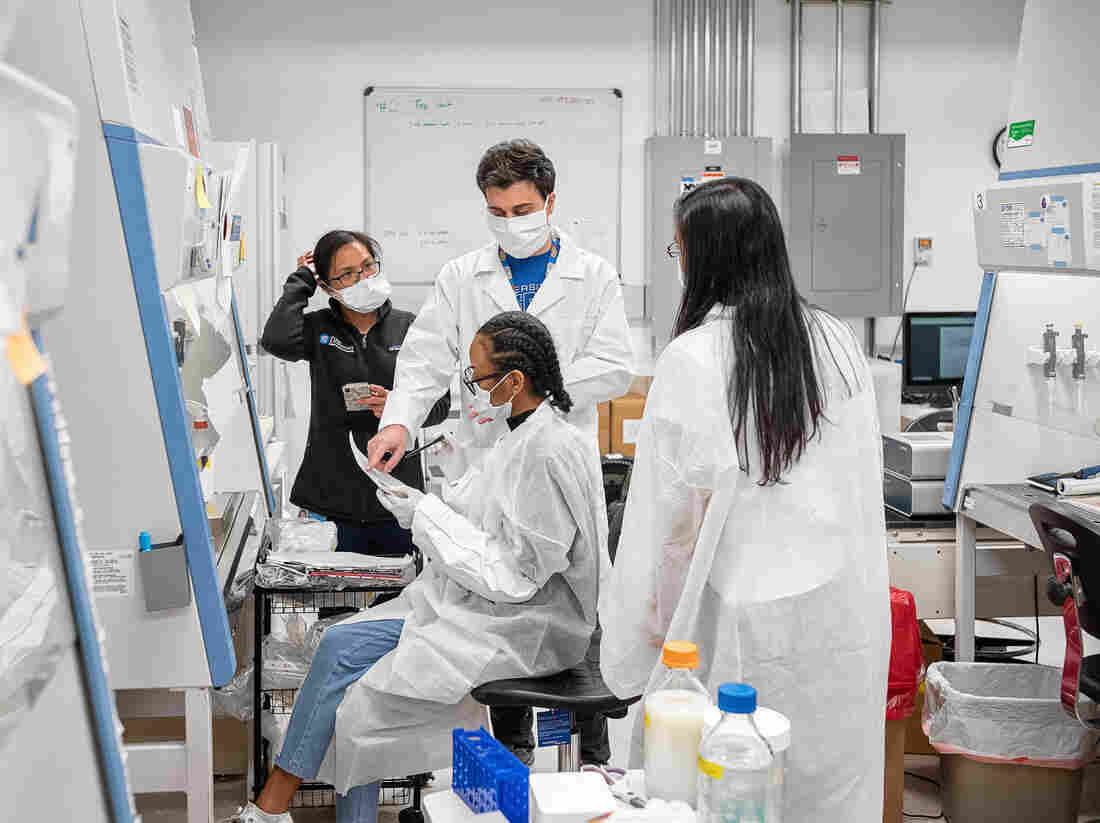 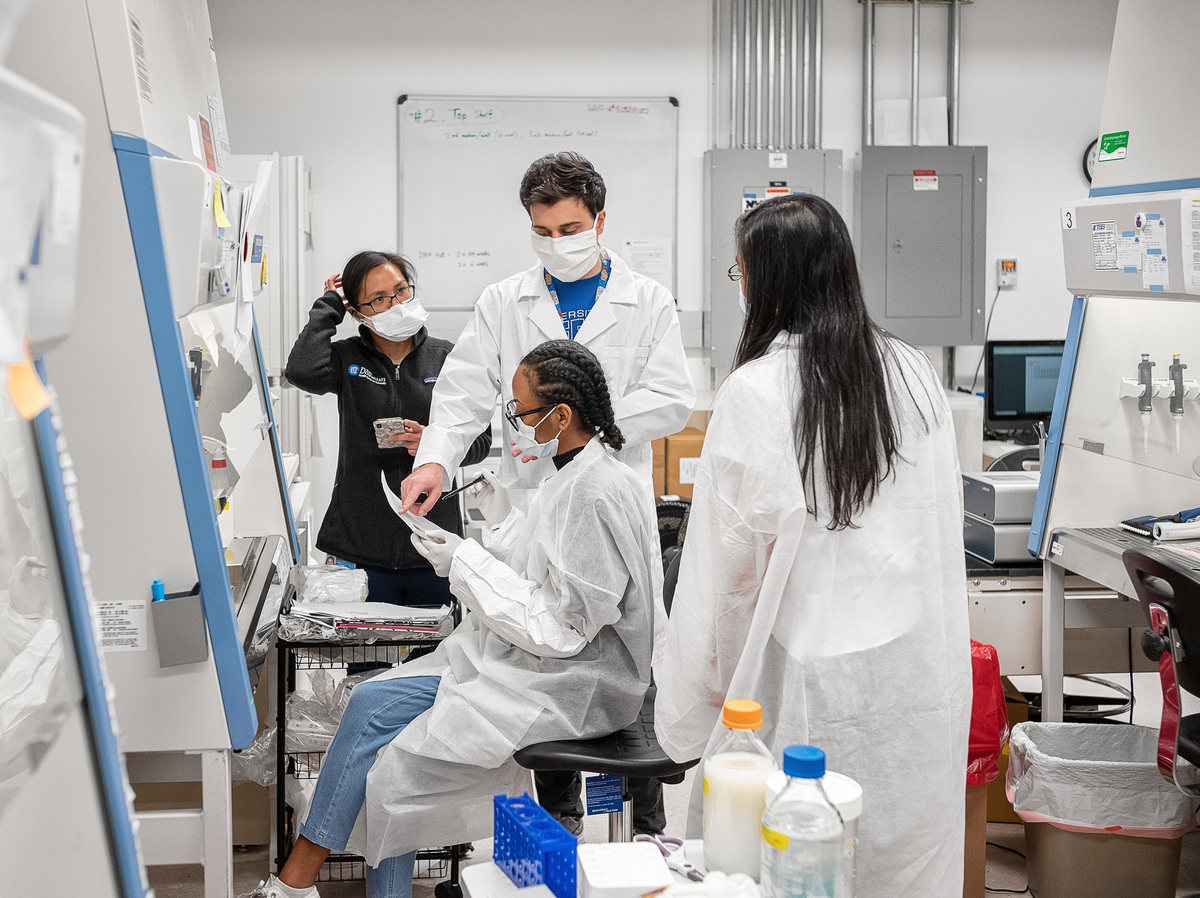 When Alaska's first COVID-19 case was discovered in March, the director of the state's public health laboratory began scrambling to find enough technicians and microbiologists to confront the emerging pandemic.

State public health labs are the nation's first line of defense against an infectious disease because they handle the early diagnostic tests. But labs in Alaska and several other states were left short staffed after years of state budget cuts and inconsistent federal funding, according to an APM Reports analysis.

Bernard Jilly, director of the Alaska State Public Health Laboratories, said that over the past decade, the labs' funding didn't keep up with inflation, which forced the state to cut staff. The makeup of the labs' workforce also changed. Fewer higher-level scientists are working at the labs, according to budget documents.

Testing Capacity Will Determine Abilities Of States To Reopen

Testing Capacity Will Determine Abilities Of States To Reopen

When COVID-19 hit the state, Jilly was desperate to find help. Though the federal government is now spending billions of dollars to increase capacity and staffing at state and local public health labs, it isn't as simple as posting a "Help Wanted" sign.

"They just don't grow on trees, and it takes a significant amount of time to train these people," Jilly said. "And once they're gone, they're gone."

In addition to dealing with supply chain problems plaguing labs across the U.S., Jilly also had to get creative with staffing. He rehired retired employees and recruited college faculty and students with lab experience. He even delayed his planned March retirement to lead his staff during the crisis.

Jilly isn't alone in struggling to keep his public health lab running amid the largest pandemic to affect the U.S. since the 1918 flu. An APM Reports analysis found that labs in at least 10 states have been forced to deal with challenges that include budget reductions, staffing cuts, high turnover, lab closures and funding delays for equipment. APM Reports combed through available budget documents, annual reports, inspector general reports and federal grants to get a handle on how public health laboratories are funded. The picture isn't complete because of the different levels of detail that states provide about lab budgets. But the available information shows that there have been worries about lab capacity in many states. They include the following:

Moreover, 25 states and the District of Columbia saw cuts to overall public health spending between 2008 and 2018, according to data compiled by the State Health Access Data Assistance Center at the University of Minnesota. The reductions came despite repeated warnings from government agencies and experts that the public health system wasn't prepared for a pandemic or biological attack.

"We have clearly demonstrated in recent years that the lab capacity is just maxed out," said Mary Denigan-Macauley, director of the Government Accountability Office's health care team. "You can't staff [up] for a pandemic. That's just not realistic."

APM Reports interviewed nine state and local public health lab directors who say they've had to take extraordinary steps to meet demands to test for COVID-19 following reductions in funding. Those steps include seven-day workweeks, forgoing other vital public health tests, shifting staff from other departments and hiring additional employees to do the lab work. But they worry that the increased workload could reach a breaking point.

"These are not simple tests. They require a fairly good amount of focus," said Eric Blank, chief program officer of public health systems and programs at the Association of Public Health Laboratories.

The biggest task may still lie ahead. Public health labs, in concert with other public health professionals, will have to help conduct the increased testing and surveillance that experts say will be the only way for the nation to ease social distancing restrictions and resume economic activity.

"From crisis to crisis"

The network of state and local public health labs across the U.S. has a critical role in the early stages of an infectious disease outbreak. The labs must conduct the initial diagnostic testing — before private labs can get up and running with their own tests — so public health authorities can locate and contain clusters of disease. When COVID-19 hit, public labs were severely hindered.

In February, the Centers for Disease Control and Prevention botched a test designed to detect the coronavirus. The problem set back labs from doing the necessary testing to slow the virus' spread. A shortage of testing supplies also forced lab directors to ration tests, which left public health officials blind to where the virus was spreading.

The testing failures have been widely reported, but public health labs and departments in many states also saw their budgets or staff cut in recent years. An APM Reports analysis shows that public health budgets in recent years surged during potential disease outbreaks — such as H1N1, Zika and Ebola — but dropped off once the immediate threats faded away. The federal government authorized at least $13.45 billion to help state, local, tribal and territorial public health agencies deal with the COVID-19 outbreak, a portion of which will be directed to labs.

But lab directors say this boom-and-bust cycle makes it difficult to manage a laboratory. They say the new funds will pay for overtime of existing lab professionals and for equipment. But it will take time to hire qualified personnel.

"We continue to go from crisis to crisis, instead of appreciating that this is a service that's needed all the time," said Frances Pouch Downes, a professor with the Biomedical Laboratory Diagnostics Program at Michigan State University and a former lab director in Michigan. "Would we do that with a fire department?"

Funding for public health labs goes beyond routine testing, Downes said. It's needed for equipment updates and maintenance, for emergency preparedness and for increased training to ensure that lab technicians and microbiologists can process multiple tests.

A look at funding over the past 20 years shows the funding roller coaster. After the Sept. 11 terrorist attacks, state and federal governments ramped up funding for emergency preparedness that resulted in a spike for labs and other public health programs.

But fears of a bioterrorism attack soon waned. Some state and city leaders cut funding for labs and other public health programs in the years following the 2008 recession to balance their budgets, and in some cases, those reductions were never restored — until COVID-19.

Federal funding directed through state governments has also fluctuated. Labs receive two streams of funding from the federal government: the Public Health Emergency Preparedness grant and the Epidemiology and Laboratory Capacity grant. PHEP funding declined 27% between 2004 and 2020. The ELC grant — a much smaller pool of money — has generally increased over time, but the funding to states has fluctuated over the past five years as disease outbreaks occurred. The funding shortfall came despite warnings by federal watchdogs that the nation was ill-equipped to manage a pandemic.

"If you think back to Sept. 11, I don't think any of us who went through that thought we would ever forget," said the GAO's Denigan-Macauley. "So the concern is that once this passes, people will forget and budgets will go in different ways."

State and federal officials continue to express frustration at the slow pace of testing. Much of the demand for testing now falls on commercial labs, which have the equipment to test in larger volumes.

But a breakdown in supplies — including cotton swabs, chemical reagents and personal protective equipment — is hindering testing at nearly all labs. The demand will likely soon increase. Experts have said repeatedly that lifting social distancing restrictions and stay-at-home orders will require robust testing and monitoring to ensure cases don't spike once people return to work.

State officials there are also working with the Mayo Clinic and the University of Minnesota to increase testing — they recently announced plans to conduct 20,000 tests a day — but they are still woefully short of their goals. On average, Minnesota has reported 1,473 tests a day in April. That's far below the 5,000-tests-per-day goal that Minnesota Gov. Tim Walz initially said he wanted to see to ensure social distancing restrictions can be lifted. Walz is one of several governors who have suggested that testing must be broadened from solely diagnosing the coronavirus to doing antibody tests that determine if people unknowingly had the virus.

But the surveillance work needed on both fronts will require help from another public health sector that has also seen significant budget cuts across the country. Between 2008 and 2017, the National Association of County and City Health Officials said nearly a quarter of local public health workers — 56,000 people — have lost their jobs because of budget cuts. Those workers would have helped do the necessary legwork to spot an outbreak and ensure it didn't spread. The process of piecing together who else a sick person might have infected, known as contact tracing, can be exhaustive, especially in the midst of a major pandemic.

"This level of contact tracing will be much more intense," said Adriane Casalotti, with the National Association of County and City Health Officials. "Because every minute that you're not getting in touch with [infected people] and having them self-quarantine is another minute that they may be spreading it to other people."

For the virus surveillance work to be successful, a massive expansion of workers and volunteers will be needed, Casalotti said. Some estimates say as many as 300,000 people will need to be either hired or trained as volunteers. Some of those volunteers are already working in public health labs across the country. Monterey County, California's public health lab now has six college students working for free after the lab director publicly worried about staffing shortages. She said she's appreciative of the students' efforts but worries they don't have the necessary skills of her experienced colleagues.

"I worry about these students because, yes, they're skilled and they can perform these techniques, but they don't have the years of training that it takes to work in an environment where we're constantly working with highly infectious organisms here in this lab," said Donna Ferguson, laboratory director for Monterey County's Health Department.

Ferguson said she expects the state and federal government will continue to spend money to increase testing availability at public health labs and commercial labs. But she worries the funding will drop off again when the pandemic subsides.

"I'm not real optimistic that things are going to necessarily change for the better for public health labs after this is all said and done," she said. "People have very short-term memories. We may get funding for another year, maybe two, and then after that it'll be business back to normal."

Curtis Gilbert and Emily Hanford contributed to this report. This story was originally published by APM Reports.