Accessibility links
House Cancels Plans To Return To Washington Amid Coronavirus Concerns The House majority leader initially told House Democrats the chamber would convene next week. A bipartisan task force is looking at options for remote voting and committee work.

House Cancels Plans To Return To Washington On May 4, While Senate Preps For Session

House Cancels Plans To Return To Washington On May 4, While Senate Preps For Session 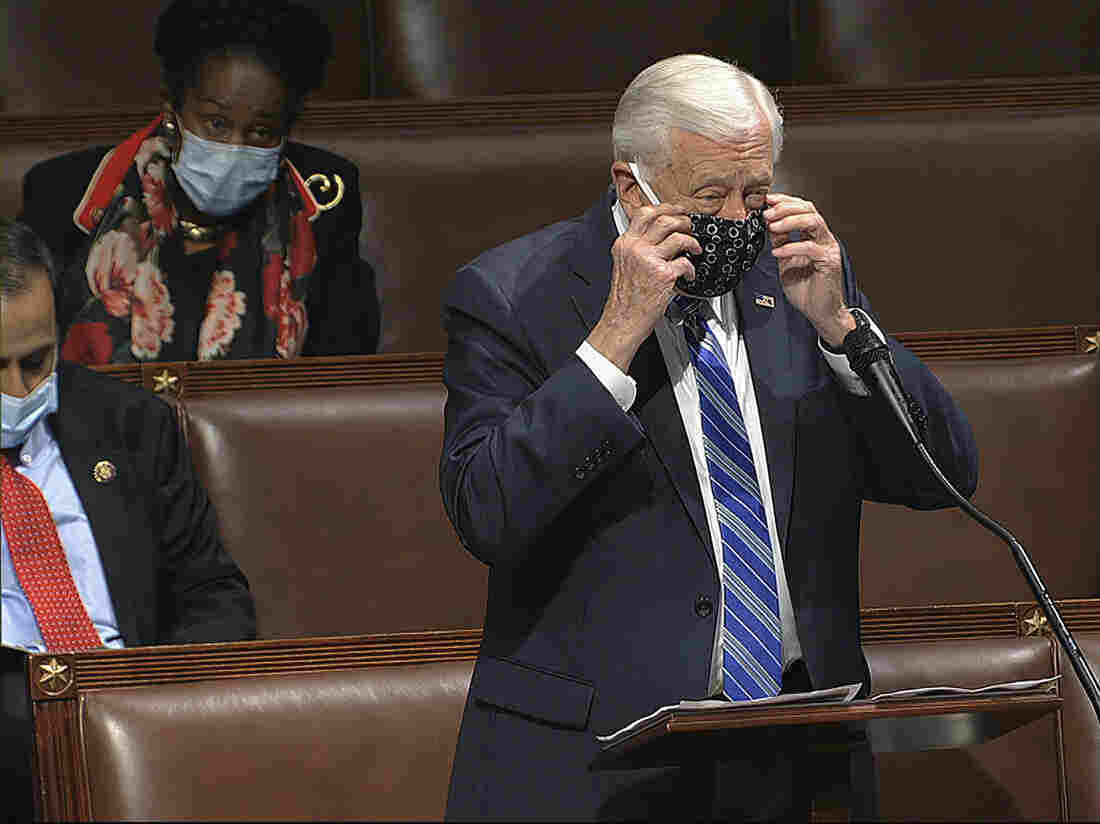 House Majority Leader Steny Hoyer says the Capitol physician is advising against the House coming back into session as planned on May 4. House Television via AP hide caption 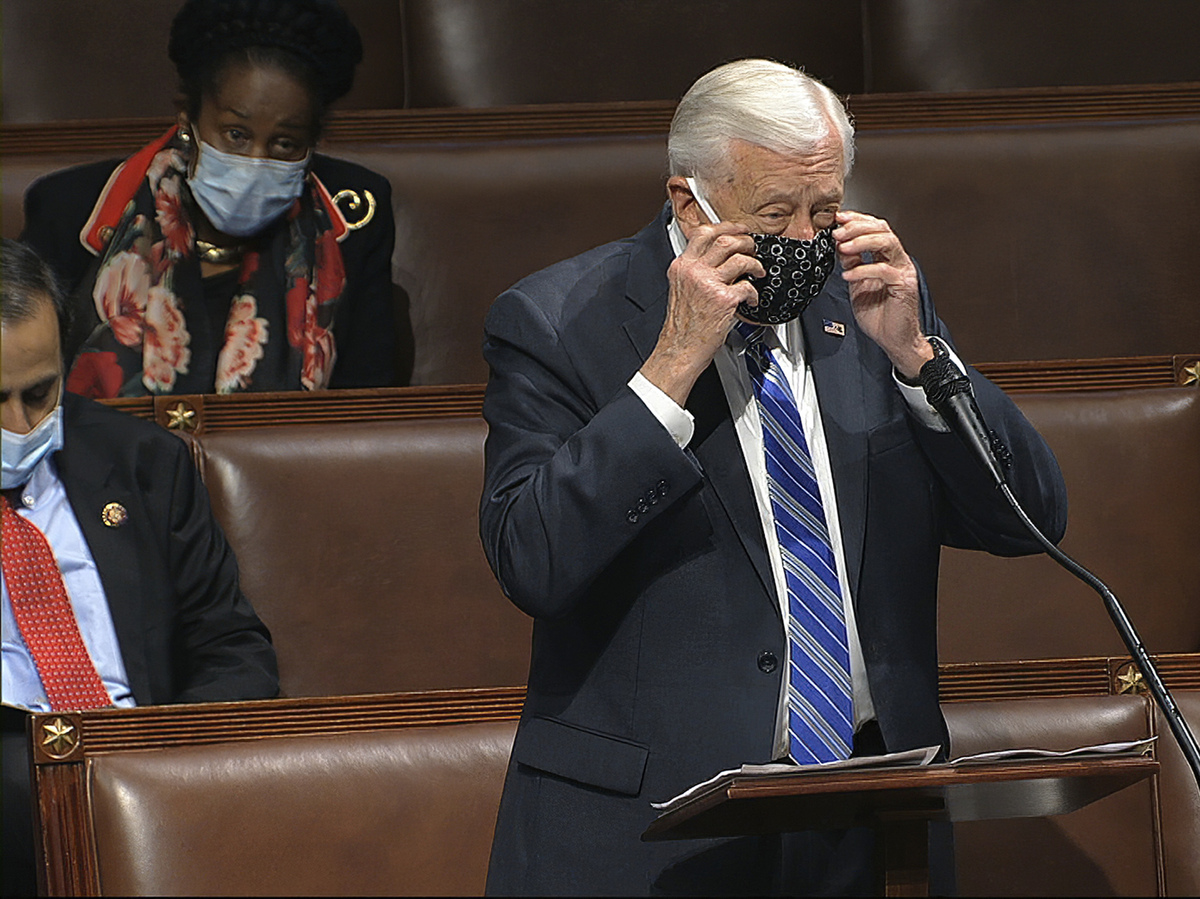 House Majority Leader Steny Hoyer says the Capitol physician is advising against the House coming back into session as planned on May 4.

House Majority Leader Steny Hoyer is cancelling plans to bring lawmakers back to the Capitol next week, based on advice from the attending physician in Congress.

A bipartisan task force will continue to negotiate ways to hold virtual committee hearings and markups as Congress struggles with legislating in the midst of the coronavirus pandemic. Republicans, including President Trump, are increasing pressure on Democratic leaders to reopen the House as lawmakers debate elements of the next coronavirus relief package.

"We will not come back next week but we hope to come back very soon to consider the CARES 2 legislation," Hoyer, D-Md., said during a teleconference with reporters. "The House physician's view was that there was a risk to members that was one he would not recommend taking."

Senate Majority Leader Mitch McConnell, R-Ky., has taken a different approach and still plans to bring the Senate back into session on Monday. It has confirmation votes planned, but it's unclear whether the Senate will act on any coronavirus-related legislation.

House Speaker Nancy Pelosi, D-Calif., told reporters on a separate call that the House is following the guidance from the attending physician and noted that there are far more House members and staff than there are in the Senate. Pelosi said it is possible the House could return in smaller numbers and conduct meetings remotely.

Pelosi noted that the House successfully held a voice vote with limited attendance in March and conducted a recorded vote last week in coordination with the House sergeant-at-arms and the Capitol physician.

"It was fine," Pelosi said. "They are prepared for us to do that again."

One issue complicating the return is the continued rise in coronavirus cases in and around Washington, D.C. Two suburban counties have been identified as active hotspots, making the district a particularly risky place for members and staff to congregate. Further, calling Congress back into session is a complicated task that also involves bringing thousands of people, including cafeteria workers, staff and security, to the Capitol complex.

McConnell has promised that Senate business will be conducted in accordance with new safety guidelines but his office has not released the details of that plan. A spokesman for McConnell declined to comment on any guidance provided to their office from the attending physician regarding the reopening of the Senate.

"We will modify routines in ways that are smart and safe, but we will honor our constitutional duty to the American people and conduct critical business in person," McConnell said in a statement. "If it is essential for doctors, nurses, healthcare workers, truck drivers, grocery-store workers, and many other brave Americans to keep carefully manning their own duty stations, then it is essential for Senators to carefully man ours and support them."

A group of House Republicans led by Rep. Brian Mast, R-Fla., protested the House being out of session earlier this month ahead of the vote on additional funding for coronavirus relief loans for small businesses. He and other Republicans have demanded that the House reconvene.

I'm at the Capitol today. Most Members of Congress are not. That's a serious problem. Every hour we don't vote means more businesses closing & more people losing jobs.

I will keep fighting to get the other 534 Members of Congress to realize this urgency before its too late! pic.twitter.com/kWvEdxXy1y

Trump mocked Hoyer's decision to keep members home, during an event at the White House Tuesday.

"The Democrats, they don't want to come," he said, suggesting "they're enjoying their vacation" and adding "I think they should be here."

Democrats argue they are following public health guidelines. They say members are still working from their home districts and should not travel through airports and train stations and convene in the enclosed space of the Capitol without pressing legislative business.

Senate Democrats echoed Hoyer's concerns Tuesday. Senate Minority Leader Chuck Schumer, D-N.Y., and other Democrats sent a letter to McConnell asking that they remain out of session unless they are conducting legislative business.

The Senate Democrats are calling for the Senate to use the time in session to focus on oversight of the relief bills that have already passed, including public hearings with Trump administration officials.

"There is currently no scheduled legislative or committee business related to the COVID-19 public health and economic emergencies," the letter said. "We respectfully urge you to have the Senate focus on COVID-19 related matters and oversight of all COVID-related legislation enacted by Congress."