Accessibility links
Gap Years To Financial Aid: A College Decision Day Colored By Coronavirus It's unclear what college will look like in the fall, but students and families are having to make decisions now, despite worries about financial aid, travel and a highly contagious disease. Alexis Jones committed to going to Cornell University in the fall. "I don't know how to feel," she says, "because I don't know if I'm going immediately in the fall with this pandemic and everything." Elissa Nadworny/NPR hide caption 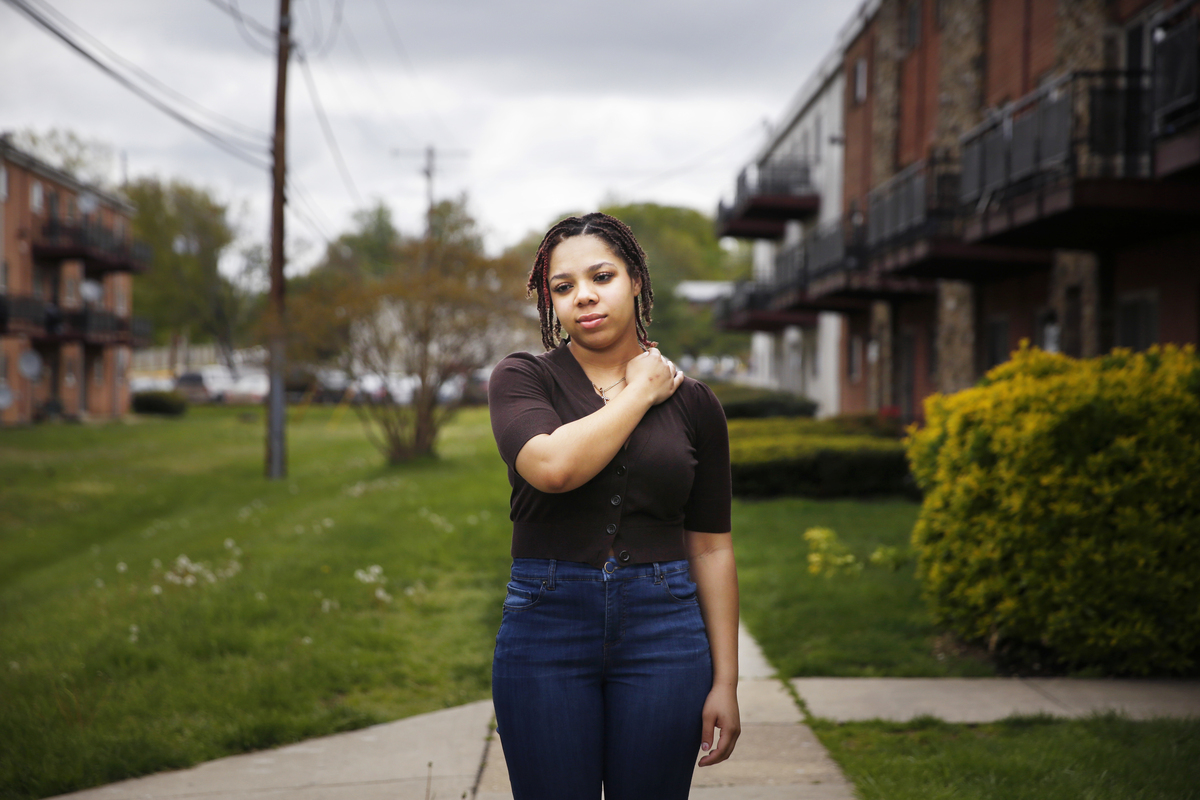 Alexis Jones committed to going to Cornell University in the fall. "I don't know how to feel," she says, "because I don't know if I'm going immediately in the fall with this pandemic and everything."

For the last few weeks, it's been tough for Alexis Jones to focus. The high school senior has been holed up in a two-bedroom apartment with, at times, four other people, on the outskirts of Washington, D.C.

She's busy with her high school classes, AP tests, her online college course, plus her job at a nonprofit, for which she is still working remotely. The things that bring her joy in isolation? Painting with acrylics and daydreaming about college.

Jones has committed to Cornell University in Ithaca, N.Y. But even that, which she says is the payoff for being such a good student these past four years, feels bittersweet.

"I'm excited," says Jones, "but I don't know how to feel because I don't know if I'm going, you know, immediately in the fall with this pandemic and everything."

Students across the country are navigating this traditionally exciting time with more than a bit of uncertainty and apprehension. It's unclear what college will look like in the fall, but students and families are having to make decisions now, despite worries about financial aid, travel and a highly contagious disease.

Historically, May 1 has been known as national decision day, when the deposits that dictate where students will attend in the fall are due. Amid the pandemic, about 400 schools have moved that deadline back a month, to June 1, to give families more time to make a decision. Cornell still advertises May 1 as its deadline. But it's unclear whether, even by summer, we'll have a clear picture of where students will be in the fall.

Survey data suggest that 1 in 6 students have already changed their plans, deciding to forgo attending a four-year college full-time. Some of those are students who had already submitted a deposit.

"April is supposed to be such a joyous moment for our seniors," says Zachary Montez, a college counselor for the Denver Scholarship Foundation — a nonprofit that works with students to help them succeed in college. "With this whole pandemic coming into focus, that uncertainty students are now facing is just so debilitating."

Montez, who works with about 160 seniors at Northfield High School, says figuring out the finances is always the hardest part of the college process, and it's only gotten harder this year. "A lot of my seniors are very conscious about the financial burden that attending college may place on their families," he says, "before this pandemic, they were in a comfortable spot financially, and now they're not in a comfortable spot."

With the Denver schools closed, Montez has shifted all of his work with students online. But that's been a challenge. "College advising has to deal with the student and the student's mindset at a particular time, and that includes their emotional state, their well-being," he says. "It's making that conversation a lot more difficult to have because I'm not able to sit down and assess their non-verbal cues of what they're telling me."

Alexis Jones wasn't able to visit Cornell's campus but she feels connected to the school through its virtual outreach — "every single person I talked to said it was beautiful!" She's in a GroupMe chat with other accepted students, and says a lot of people on the chat are talking about deferring their enrollment for a year.

"I just think, 'What would you all do?'" she says. That plan, sometimes called a gap year, is not really an option for Jones. She'd have to continue living at home, it would be hard to find a job, and she's worried she'd lose her scholarships, a risk she's not willing to take. And there's another big concern: "If I took a gap year," she says, "I may be compelled not to go back." 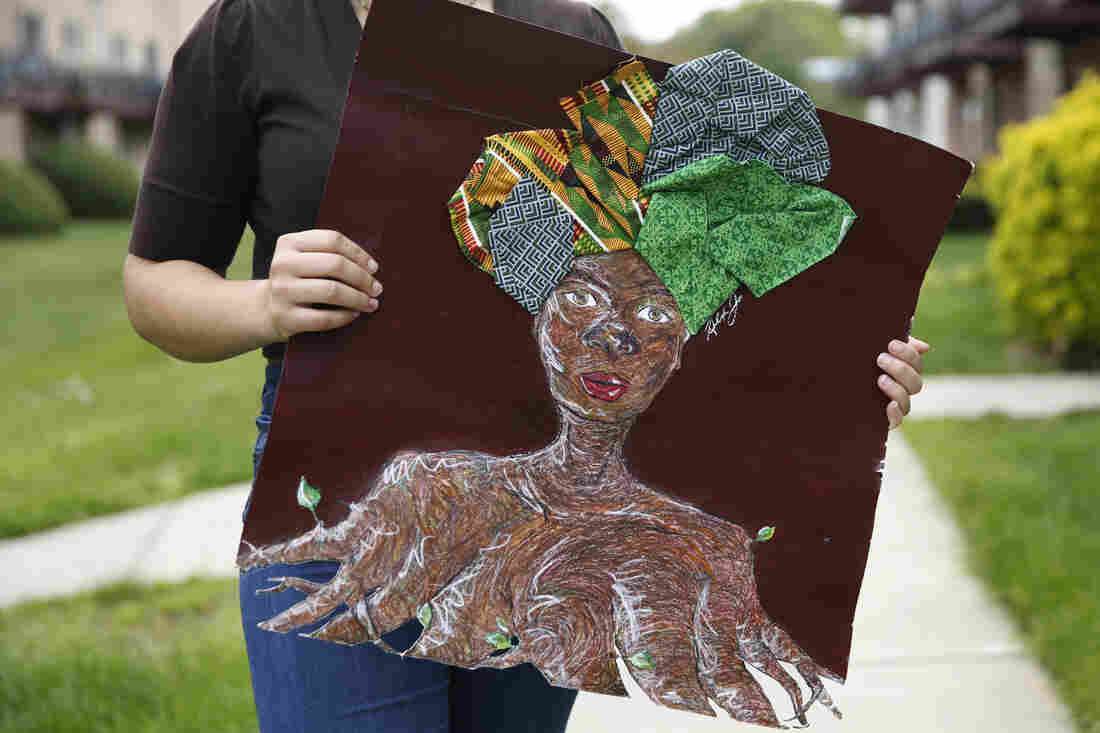 The things that bring Jones, a high school senior, joy in isolation? Painting with acrylics and daydreaming about college. Elissa Nadworny/NPR hide caption 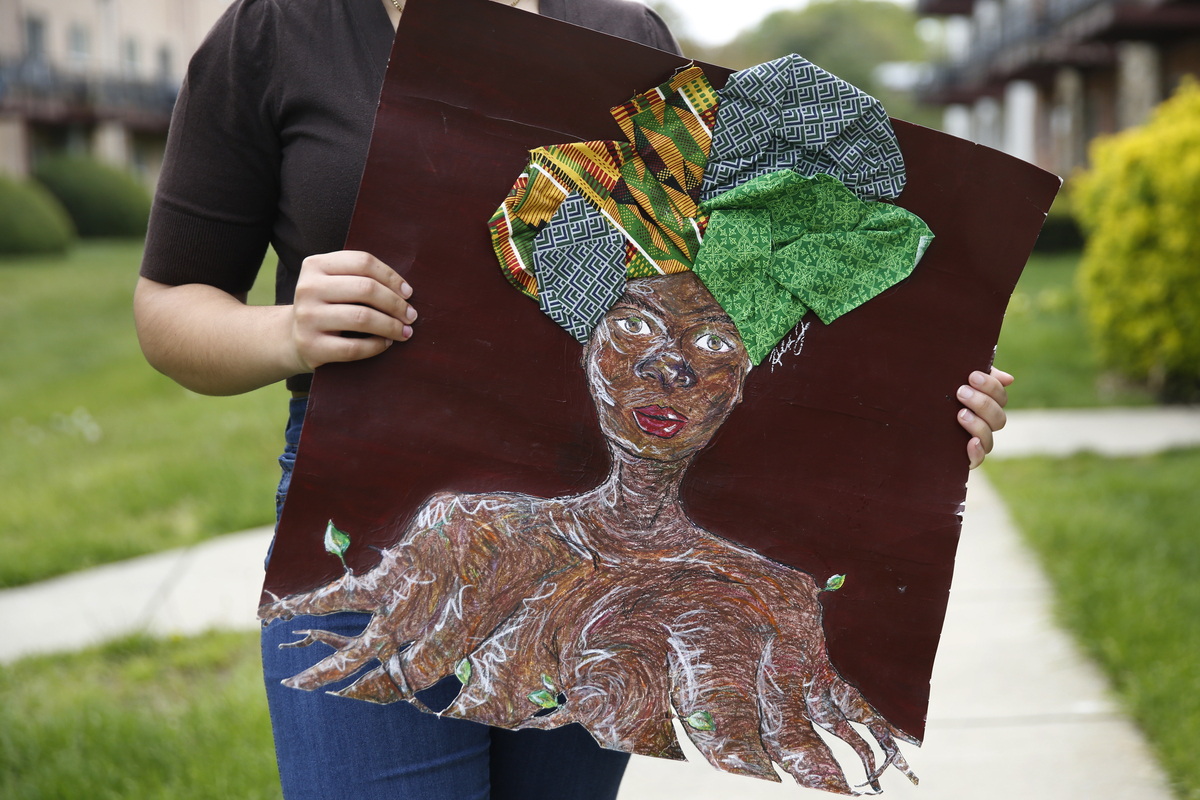 The things that bring Jones, a high school senior, joy in isolation? Painting with acrylics and daydreaming about college.

That's a big worry college advisors have, too, right now, and research justifies their concern. "As much as the gap year seems like a good idea for some students, for a lot of students, it actually puts them on a pathway where the idea of full-time enrollment gets less and less likely over time," says Nicole Hurd, the founder and CEO of the College Advising Corps. "If you wait, then life starts to happen," she says. "All of a sudden, there's income that you don't want to replace. There are relationships that form. There are responsibilities that start to emerge."

In Denver, Montez has been surprised with all the gap year talk. Several of his students who were headed to college are now rethinking, "simply because of the financial uncertainty," he says. "Sometimes students aren't forthcoming about what is causing them to have that idea of a gap year, mainly because it's just a lot of personal information that might be occurring with them and their family." That's made it especially hard to advise them, though Montez says, he typically discourages it. "A lot of things can occur during that gap year that can impact them from moving forward," he says.

With some 26 million additional Americans now out of work, paying for college in many families looks a lot different than it did when students applied for financial aid, often back in the fall.

Sydnee Hrachovina, a high school senior at Onekama High School in western Michigan, says she's been dreaming about going to Michigan State University since she was little. When she got accepted in December, "it was the greatest Christmas present ever!"

But now, she's trying to figure out how to pay for it. Her two summer jobs, as a nanny and working at the ice cream store in town, aren't looking like they'll happen this summer. So she and her mom are looking into appealing her financial aid offer, thinking maybe MSU will offer more financial aid.

"Not enough students know you can appeal the financial aid you've been offered," explains Abigail Seldin, who founded a free tool called SwiftStudent that helps students through the process of asking for additional funds. The application form for federal student aid, known as the FAFSA, relies on tax data from two years ago. A lot can change in that time — especially today, with high unemployment and a tanked economy.

In The Weeks Before Freshman Year, Money Worries Aplenty

Because of this, most schools have built-in an appeals process, but it's complicated and happens at the school level. "So much of our financial aid process is a formal process," says Seldin. "Students who may not feel comfortable asking for help, who are first-generation, are less likely to go reach out and ask for more resources, let alone resources that they don't even know exist."

She says she's hoping the SwiftStudent tool will make the process more transparent, especially as families struggle with job losses, reduced hours and pay cuts and even evictions related to the pandemic.

Officials at Michigan State say they're still trying to figure out what campus will look like in the fall, but Hrachovina is thinking it's likely her fall classes there will be online. Because of that, she briefly considered taking classes at the local community college instead.

That would be cheaper, but she's worried those credits wouldn't count toward her degree at MSU. Plus, she says, she needs to hold on to the dream of someday leaving her small town in western Michigan.

At MSU's sprawling campus in East Lansing, she says, "there are just so many more opportunities for me there." Her family is also hoping that, if campus is closed in the fall and classes are online, tuition might be reduced.

Alexis Beuchart, a student at Northern Virginia Community College, is planning on transferring to a four-year school in the fall. Her classes have already been online, so she's thinking a virtual fall would be OK.

"It's not exactly how I planned," she says, "but I know how to do it. I've taken all online courses for the past two years, so I'm pretty accustomed to the whole 'teaching yourself' thing." She says staying the course and getting her bachelor's degree, is the most important thing. Her daughter, Roya, is a major motivator, and Beuchart says she's just trying to stay focused.

"I've been noticing that a lot of my students' parents may not want them to go further away from Colorado simply because of that unknown," says Zachary Montez, the college counselor in Denver. Families are wary of travel, and afraid another wave of the virus will hit in the fall. Local colleges feel safer, says Montez, and in many cases, community colleges or branches of the state school are cheaper and have established online programs. Montez says his students "are trying to consider what is going to be the best option for their family."

Even Alexis Jones' choice to attend Cornell was swayed by the pandemic. She'd gotten essentially a full ride to four schools, with scholarships and financial aid, but two of those schools were in California. "I really did want to go to California," she says, "But with a pandemic, it was like, what if I couldn't leave or something? Then where would I go?" At least with Ithaca, she says, in the worst case scenario, her dad could drive the six hours to come get her.