Accessibility links
In France, A New App Is Helping Doctors Monitor COVID-19 Patients Remotely The Covidom app allows thousands of patients with non-critical cases of COVID-19 to ride the virus out at home. They answer questions on a range of health indicators and doctors follow up by phone. 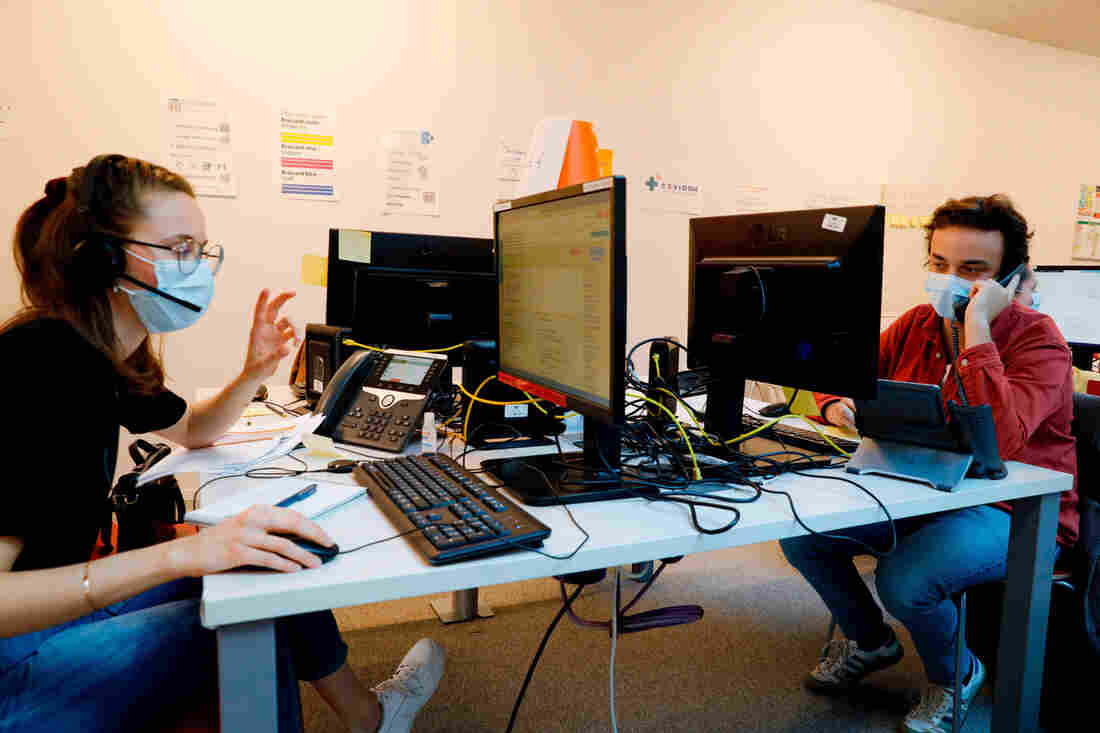 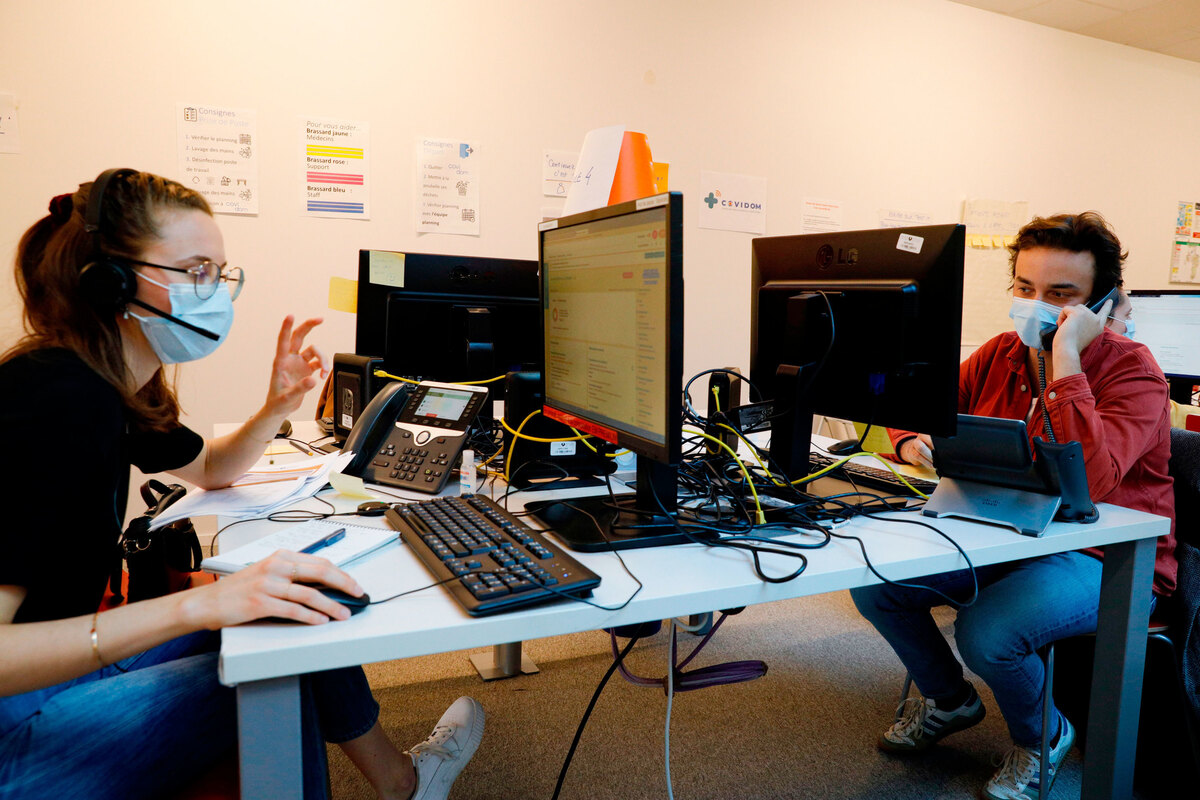 On a sunny weekend in mid-March, just a couple of days before President Emmanuel Macron put France in lockdown to help slow the spread of the coronavirus, 32-year-old Daphné Rousseau was outside Paris, enjoying lunch in the countryside with a group of friends.

"Everyone was talking about the coronavirus, and then suddenly after lunch, I started to feel a bit weird," she says. "After a few hours, it was obvious that something was going wrong because I had, for the first time in my life, shortness of breath — which is a very, very unusual thing to feel when you've never had asthma or any problems with your lungs."

That night, Rousseau had to prop herself up in bed to breathe.

"I felt very dizzy," she says. "I felt that my lungs were doing half the job — like only half of what should go inside my lungs was actually going through my lungs." 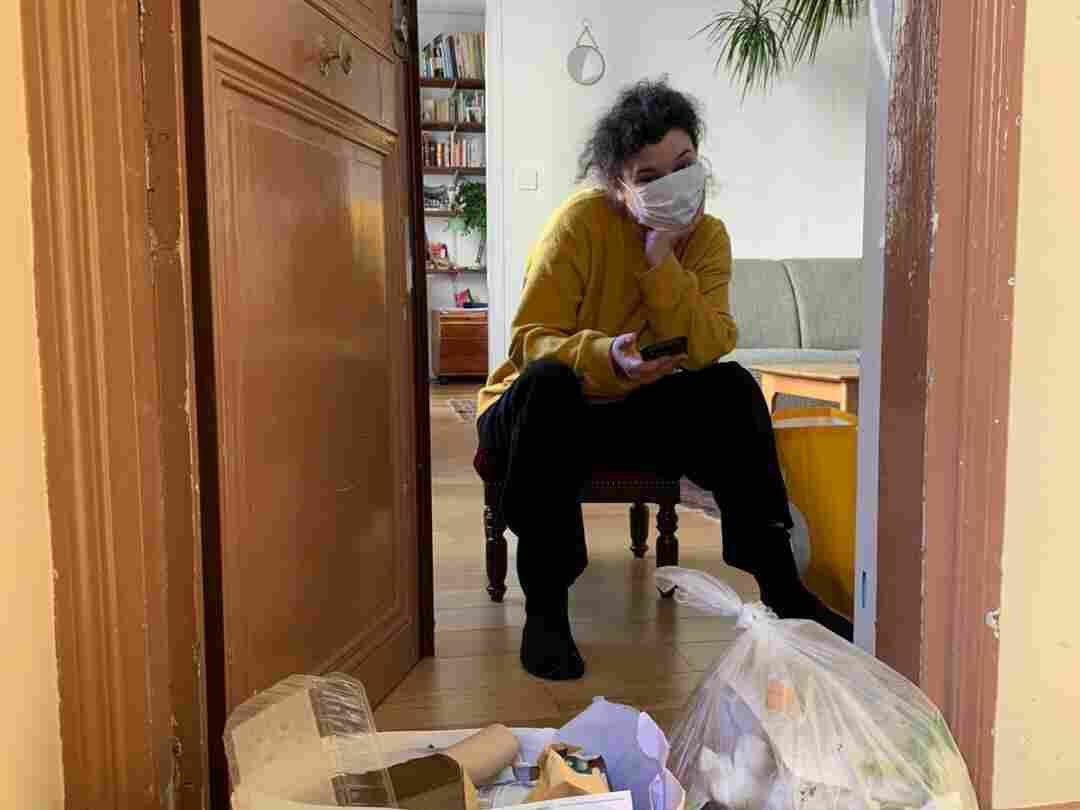 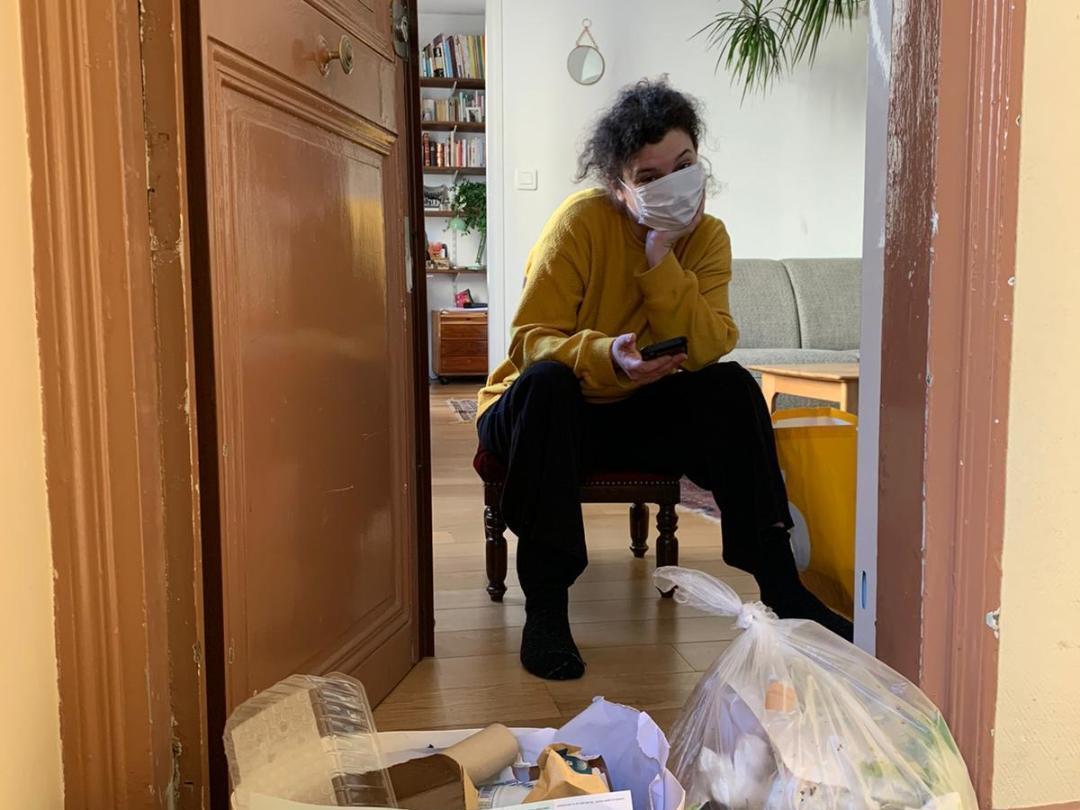 Daphné Rousseau waits for a friend who comes to drop off food and take out the garbage.

Rousseau called the medical emergency line. It took 49 minutes to get through. The coronavirus wave was starting to sweep over France. A doctor eventually came to her apartment, examined her and diagnosed COVID without doing a blood test.

Before going, the doctor told Rousseau she would receive a text message and would be registered to a new platform on an app called Covidom, that would guide her through the next days and weeks with the virus. 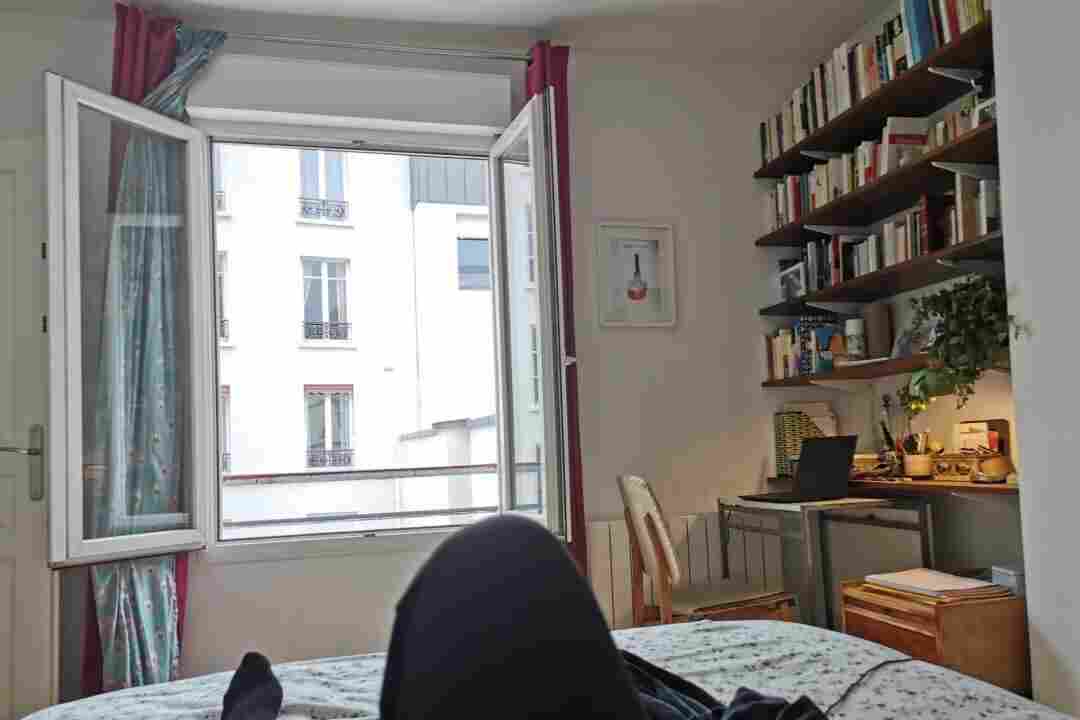 Every day from her sickbed, Rousseau answered questions generated by the app — on her breathing, heart rate, temperature and a host of other health indicators. Daphné Rousseau hide caption 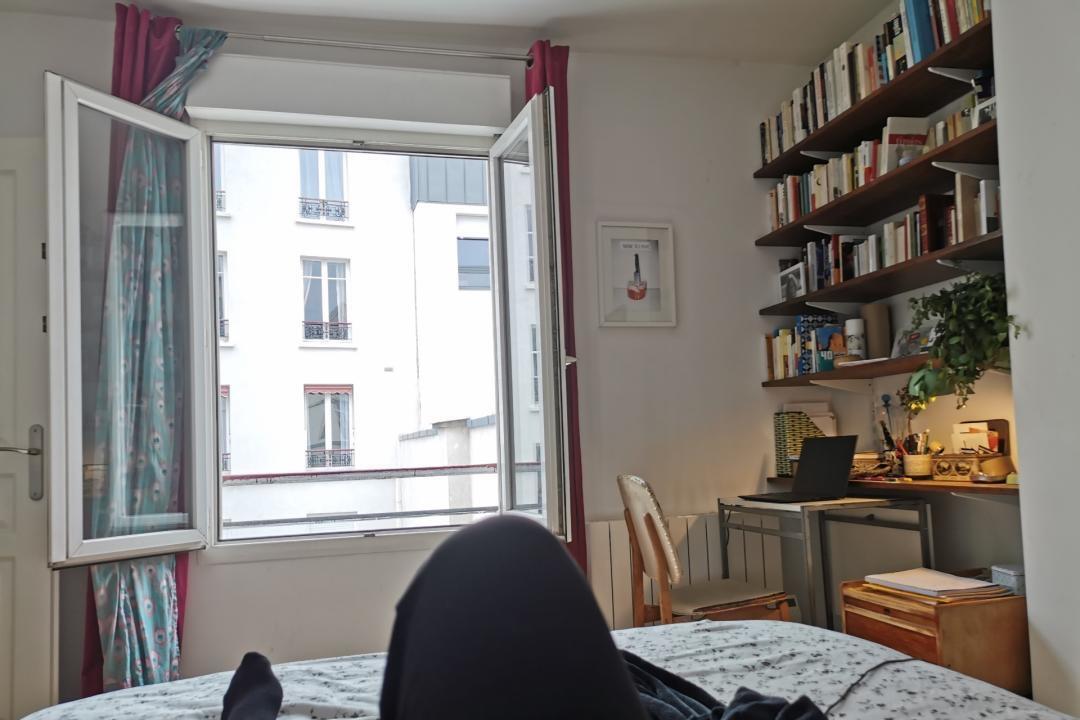 Every day from her sickbed, Rousseau answered questions generated by the app — on her breathing, heart rate, temperature and a host of other health indicators.

France has been one of the countries hardest hit by the coronavirus — with more than 166,000 cases of infection and 23,000 deaths — and Paris is a hot spot. But health officials have been able to keep the city's hospitals from being completely overwhelmed, thanks in part to the Covidom app, which has helped thousands with non-critical cases of COVID-19 ride the virus out at home.

The name Covidom is a mashup of "COVID" and "domicile." It was developed in early March by Paris university hospitals, working with a technology start-up called Nouveal e-santé.

"This app was developed with the goal of keeping people with non-critical cases from blocking up the paramedics, emergency rooms and hospitals," says cardiologist Patrick Jourdain, who runs the platform supporting the app.

Jourdain says thanks in part to use of Covidom, doctors in Paris have so far not been in the position of having to choose who will get a respirator and who won't. The app is free for patients, who make up most of its 100,000 users (doctors are included in that total as well). Healthcare facilities pay for it, and some 350 are using it. There are plans for the French state to finance it.

Jourdain says so far, only 300 app users have needed to be hospitalized, and they were identified before their condition became critical.

Every day from her sickbed, Rousseau answered questions generated by the app — on her breathing, heart rate, temperature and a host of other health indicators.

"You turn yourself into a little doctor every day," she says. "And they were adding new questions because I think they were getting more information on the disease and its symptoms as we went along."

In response, Covidom sent Rousseau color-coded messages. There were three levels of alerts, she says.

"Green, everything is okay," she says. "Orange, moderate, you will be called by a doctor when someone is available within a few hours — and red, you're being called within eight minutes by the emergency line."

Cardiologist Jourdain says some 2,000 volunteers — mostly medical students and non-essential healthcare workers — have been trained to staff the Covidom platform and respond to patients' calls.

They work in teams and in shifts from four floors in an empty university building in Paris. In a video, Dr. Loic Josseran, a doctor volunteering for the platform, says you don't have to be physically present with a patient to tell when their condition is worsening.

"The determining factor is the way they are breathing," he says. When a phone call is deemed necessary by the app, "We hear right away over the phone those who have trouble talking and are out of breath and coughing a lot. And we have a direct line to emergency services, so if a patient is declining, we can get them help immediately."

Alexander Falzon, CEO of Nouveal e-santé, says the app is adapted from a proven telemedicine platform called e-fitback that his company created in 2015 to follow patients convalescing from surgery.

"We were contacted by the Paris hospital system in the beginning of March and we were able to quickly adapt our existing platform for COVID," he says.

The company says it respects strict European regulations on privacy and security laid out in the data protection law known as the General Data Protection Regulation. Covidom users accept these privacy conditions upon registering.

Use of Covidom has expanded outside Paris to other French regions, Falzon says, and officials and hospitals from half a dozen other countries have expressed interest, including the U.S.

Nouveal e-santé is now working on an app that would help stop the spread of COVID-19 once the nationwide lockdown ends.

After her nearly three-week ordeal, Rousseau says she feels fine now. She says the coronavirus is a rollercoaster both physically and psychologically, but with the Covidom app, she didn't feel alone.

"I think the platform helps through this very psychological side of the disease," she says. "Which is, basically, you think you're good — and the day after, you're afraid that you will need to go to the hospital. I was having this amazing monitoring but it was all virtual. Nobody touched me. I was talking to a camera – some doctor that I've never seen in my life. And you get through the disease like this."

Covidom's Jourdain says the app has helped keep more than 50,000 COVID-19 patients in the Paris region at home and reduced the strain on the city's hospitals.

"It's actually transformed people's perception of when they should go to the emergency room," he says. "They realize they can stay at home in security."