Accessibility links
Italy Considers Permits For Undocumented Migrants To Fill A Big Farmworker Gap The country faces a shortfall of up to 350,000 laborers just when it is bracing for deep economic impacts from the novel coronavirus pandemic. 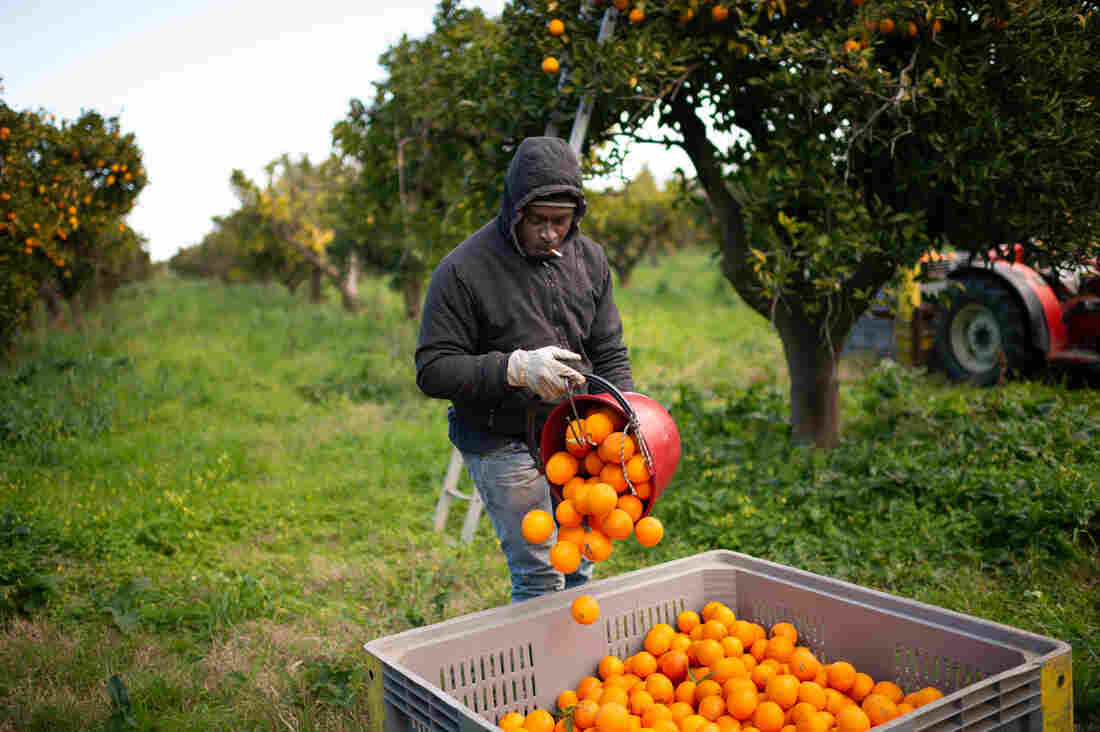 A Senegalese migrant collects oranges on the plain of Rosarno and San Ferdinando in Calabria, Italy, on Feb. 6. The lockdown countries imposed to stop the coronavirus pandemic have cut off the usual flow of seasonal farmworkers. Alfonso Di Vicenzo/LightRocket via Getty hide caption 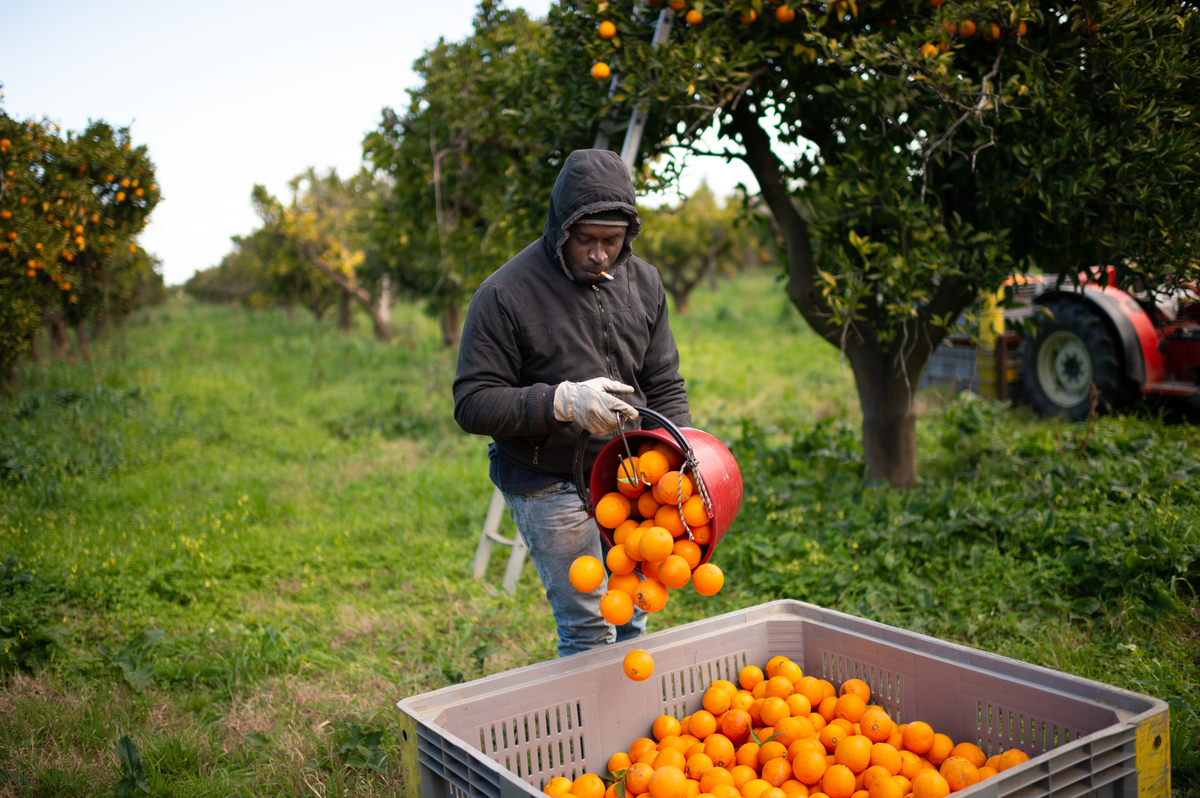 A Senegalese migrant collects oranges on the plain of Rosarno and San Ferdinando in Calabria, Italy, on Feb. 6. The lockdown countries imposed to stop the coronavirus pandemic have cut off the usual flow of seasonal farmworkers.

The novel coronavirus is reviving one of Italy's fiercest debate topics — immigration.

The Italian government is considering giving work permits to thousands of undocumented immigrants in the country, as the COVID-19 pandemic threatens crop harvests.

Seasonal farmworkers usually go to Italy each year from countries such as Romania and Bulgaria, but recent lockdowns have kept them home. That's creating a critical shortage of labor for picking fruits and vegetables needed for food and exports.

To fill the gap, Italian Agriculture Minister Teresa Bellanova wants to grant work permits to hundreds of thousands of undocumented immigrants in the country.

The proposal comes as Italy braces for deep economic impacts after bearing the brunt of Europe's COVID-19 outbreak. If approved by parliament, the move would signal a change in a country that in recent years took strong measures to limit immigration — and the proposal has riled up Italy's right-wing populist leaders.

But Italy can no longer act "as if migrants were our enemies," Bellanova told Radio Capital in early April. "They are vital to our food supply chain."

Bellanova also alluded to humanitarian reasons for the plan: Many of the undocumented live in "ghettos" where "desperation from hunger and solitude is growing," she said.

One such area is in Italy's southern countryside, where lush vegetable fields are dotted with dilapidated shacks housing largely African migrants, living without running water, electricity or windows. Castel Volturno, about 20 miles north of Naples, is known as Little Africa, where thousands of people eke out a meager living in the underground economy.

Jean-René Bilongo, a social worker from Cameroon, was a resident of Castel Volturno. In a 2009 interview with NPR, he said the migrant community was "considered as ghosts, as something just less than human beings."

Bilongo now lives in Rome and is a leader of migrant farmworkers in the agriculture section of Italy's biggest trade union, CGIL. In a recent phone call, he said the undocumented remain in "miserable conditions" and that he would welcome the new migrant work permits.

But politicians who became popular with anti-immigration policies are furious with the proposal. Matteo Salvini, leader of the right-wing opposition League party, slammed the idea.

"A blanket amnesty for 600,000 illegal migrants — you heard that right," Salvini said in a video on April 16, after Bellanova had outlined the proposal in parliament. "The League's proposal is vouchers for students, the unemployed and retirees — all preferably Italian."

Italy has an estimated 600,000 undocumented migrants, but it isn't clear how many would get permits under the agriculture minister's plan. Bellanova said the country has a shortfall of up to 350,000 workers, out of the 400,000 farmworkers it needs.

When Salvini was the interior minister, he sponsored legislation that blocked Italian ports to humanitarian ships carrying migrants rescued at sea, curtailing asylum requests. The League became Italy's most popular party. Even after Salvini's dramatic exit from government last year in a failed attempt to force new elections, the League remained on top.

But the Lombardy region in northern Italy, a League stronghold, is an epicenter of the COVID-19 pandemic. Local leaders and health officials have been criticized for bad management and delays in imposing quarantines, which has battered the party's reputation. Nationally, the League's approval rating has now sunk to 25.4% from over 31% a month ago, though it remains the most popular, according to an Ipsos poll published Sunday in the Corriere della Sera newspaper.

"I think that right now [the] Italian population is aware — the contagion is such a serious risk that something has to be done, that our health depends on the health of our people," said Boeri, a former head of Italy's Social Security Agency.

Boeri has long favored granting legal status to undocumented migrants for their contribution to the economy. It's more urgent than ever now, he says, as Italy fights to contain COVID-19.

Legal status — even if temporary — would give migrants access to health care.

"The key thing is that [work permits] should not be done for labor simply or economic reason, that should be done for health reasons," he says.

The entire population would suffer further if the most vulnerable people don't receive help, according to Giovanni Visone, communications director at InterSOS, a humanitarian group that works with migrants.

"Living in the streets as homeless or living in informal settlements, especially squats," Visone says, "it's very hard to be compliant with all the [COVID-19] protective measures."

The minister for southern Italy, Giuseppe Provenzano, stresses that "it's thanks to these workers that food reached our tables during the lockdown. Recognizing them — it's an issue of justice."