Accessibility links
As Governors Urge Businesses To Reopen, Workers May Be Pushed Off Unemployment Employees who refuse to return to work out of concern for their safety will lose state and federal benefits. It's a predicament millions will soon face as lawmakers set to restart their economies. 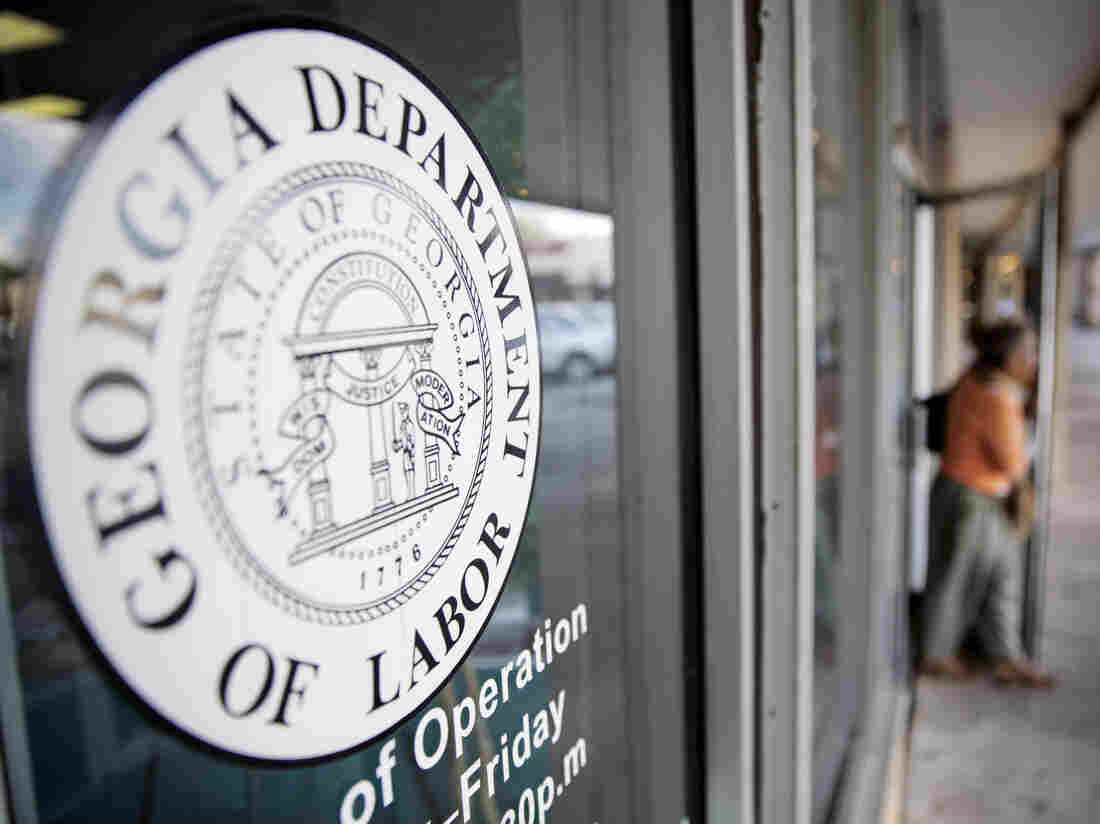 Kersha Cartwright, a spokeswoman for the Georgia Department of Labor, said the office "is encouraging employees to work with their employers on a safe return-to-work plan." David Goldman/AP hide caption 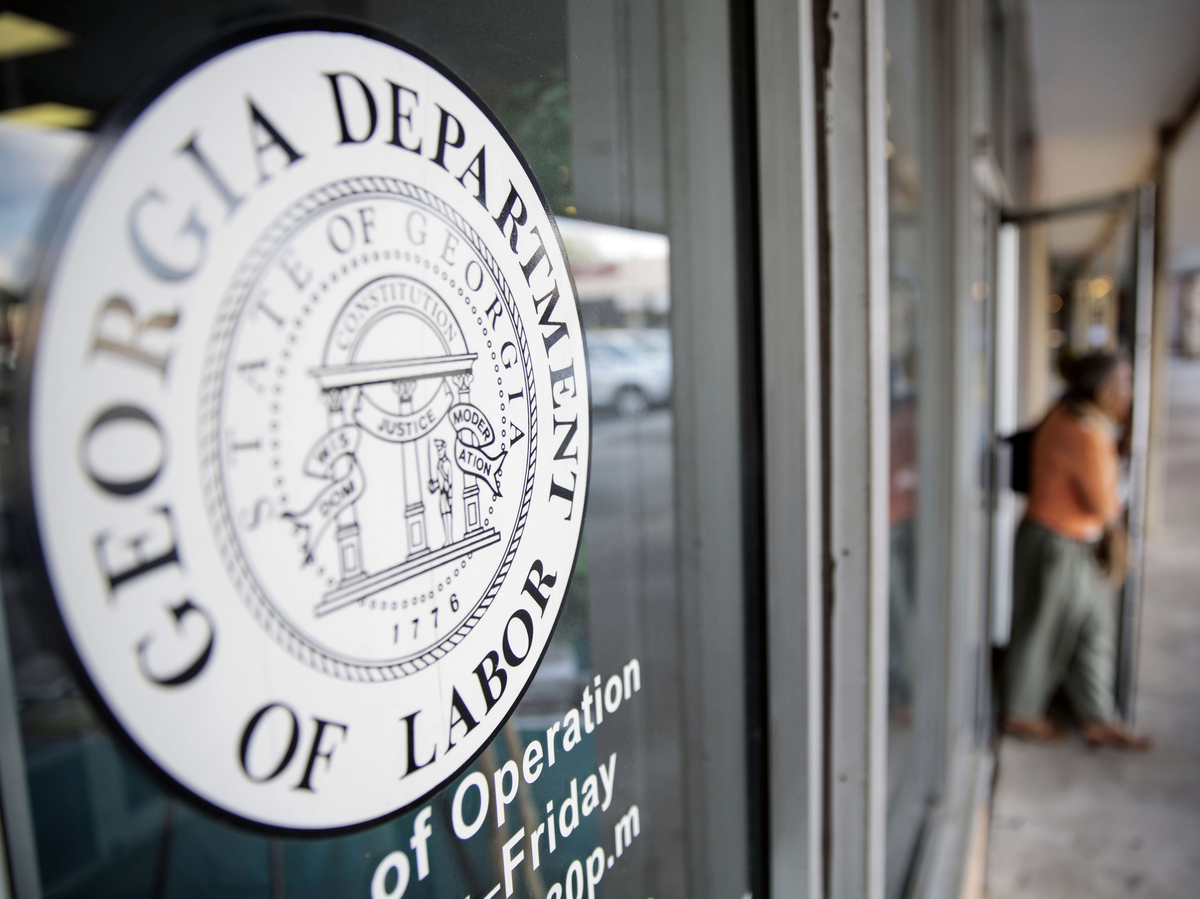 Kersha Cartwright, a spokeswoman for the Georgia Department of Labor, said the office "is encouraging employees to work with their employers on a safe return-to-work plan."

There's a call Laura Jean Truman is dreading, and she's convinced it's just a matter of time before it comes.

Truman, who's a server at Manuel's Tavern in Atlanta, says the source of her angst is the fear that sometime in the next few weeks her boss is going to call and say it's time to go back to work, putting her in the position of having to make a choice between her safety and being able to pay the bills that continue to arrive despite the coronavirus.

"Right now, everyone who is not working at restaurants is able to be on unemployment," she told NPR.

"But once restaurants decide to open, and if we decide that we don't feel safe going back into those restaurants, we then are no longer eligible for unemployment because then we have a job opportunity that we're turning down," Truman explained.

"It's a tremendously scary thing to have to think about," she said.

The predicament is one in which millions of people receiving state unemployment benefits along with federal dollars from the CARES Act — in and outside of the restaurant industry — will soon find themselves, as more states follow Georgia's lead in restarting some sectors of the economy.

Meanwhile, others living in states where lawmakers choose to heed warnings from top health officials that it's too soon to reopen will remain eligible for financial relief.

As Georgia reopens, tough choices for employers and employees

Georgia Gov. Brian Kemp was the first to urge a range of businesses to invite customers back — nearly all in the service industry.

As of this week, Kemp is allowing restaurants to open for dine-in service. Theaters have also been green-lighted for operation, and on Wednesday, Simon Property Group, one of the largest shopping mall operators in the country, announced they'll be throwing open their doors on May 1.

For now, Truman says she's been spared from having to decide between "not getting the coronavirus" and "being able to pay rent and buy food."

Her $365 weekly check from unemployment and the additional $600 boost from the Federal Pandemic Unemployment Compensation program — minus taxes — are safe. That's because the owner of Manuel's Tavern has decided not to reopen just yet. "He doesn't want to open a restaurant for dining until the science shows that it's safe," Truman recounted.

Kersha Cartwright, a spokesperson for the Georgia Department of Labor, said it doesn't have any jurisdiction in deciding which businesses open or close. For now, Cartwright said the department "is encouraging employees to work with their employers on a safe return-to-work plan."

Unlike many other states that require individuals to file claims for themselves, Georgia implemented a system that allows business owners to file on behalf of employees to facilitate the enrollment process. That means they are the ones who are reporting directly to the Department of Labor. So, if a person can find a workaround with their employer, then they may be able to continue to receive benefits, Cartwright said.

That differs from what the U.S. Department of Labor says on its website, which outlines specific conditions a person has to meet to refuse to return to work. The list includes a COVID-19 diagnosis, restrictions due to childcare availability, caring for an ill family member or health "complications that render the individual objectively unable to perform his or her essential job functions, with or without a reasonable accommodation" as a result of having recovered from COVID-19.

"However, voluntarily deciding to quit your job out of a general concern about exposure to COVID-19 does not make you eligible for [Pandemic Unemployment Assistance]," according to the site.

Cartwright's advice for Georgians who are unable to reach an agreement with their employer and are taken off the unemployment rolls is to file an individual claim with the state.

"We would look at the reasons for separation from the employee and the employer and then we would make that eligibility decision based upon those facts," she said.

Flexibility on who qualifies may be less than it appears

That can be a long and onerous process during which applicants cease to receive all benefits, according to labor law experts.

Michele Evermore, a senior policy analyst at the National Employment Law Project, said the most likely scenario is that individuals will be required to file a "quit claim" saying the workplace is unsafe.

"First, they have to raise that with their manager and then they have to have the documents to show the workplace is unsafe and nobody has addressed their concern," Evermore said.

Only then can they apply for benefits, at which point the employer has 10 days to dispute the claim.

Since the outbreak of the coronavirus, the state has processed nearly 1.1 million jobless claims. That's more than all of the claims in the past three years combined, superseding records set during the Great Recession, according to the Labor Department. And it is unclear how much of the $2.6 billion unemployment trust fund remains at this point.

Evermore noted the avalanche of new claims will likely add several weeks to the process, meaning people would be left without any financial relief for up to a month or more.

Even more discouraging, she said, is Georgia's record of rarely siding with applicants in such cases. "Georgia is one of the worst states to get benefits in ... they're quite stingy," Evermore said.

As of 2019, just 14% of those who applied in Georgia received unemployment benefits. Most states have a recipiency rate of about 50%, Evermore's research shows.

She sees the moves by governors across the country to reopen the economy against the advice of health experts as "penny wise and pound foolish." And one that is more than likely to affect low-income people over any other group because they work in the types of service-sector jobs that are being asked to resume work first.

As of Tuesday, Georgia reported 24,868 confirmed coronavirus cases — a jump from 6,895 at the beginning of the month. The state's Department of Health has confirmed 1,036 deaths.