Accessibility links
Children's Classics To Read During Quarantine With few new books coming in, our kids' books columnist turns to the favorite reads of her childhood — beginning with the 19th-century classic Five Little Peppers and How They Grew. 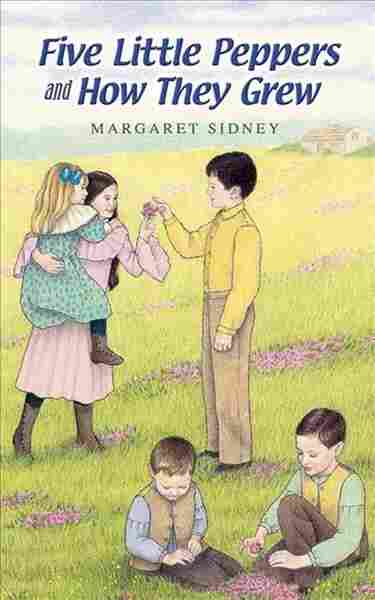 Five Little Peppers And How They Grew

There is a copy of Mary Shelley's Frankenstein sitting on my desk. I'm looking at it right now. The reason it is on my desk and not on a bookshelf is because it represents a failed experiment, one I have to share.

My son wasn't ready for it.

Before you take me to task for trying to read Frankenstein to a ten-year-old, let me be clear: He's very much into zombies (Last Kids on Earth) and animi (animuses?) (Wings of Fire), so I thought, hey, maybe we can do this. And it's not as if the monster gave him nightmares or anything. Well, maybe it would have, but who knows? We never made it that far. It took so long to explain the foreshadowing in Captain Walton's letters that I just gave up. We never even made it to the good parts.

I reckon I'll have to give it a couple more years.

If your house is anything like mine, there aren't a lot of new books coming in right now, so I'm going to my own bookshelves to find something to read with my kids. Sure, they have plenty of books of their own, but I figured I would really push the limits and share some of my favorite books with them.

I figured wrong. Frankenstein is just the latest in a long list of failed attempts: Hitchhiker's Guide to the Galaxy? Not quite yet. The Picture of Dorian Gray? Very nearly ready for it (not really). 1984? They don't get it. One Day in the Life of Ivan Denisovich? They have no frame of reference.

So back to reality I go.

I've decided to go back to my really old books, the ones kids don't really read anymore, the ones that end up on the bottom shelf at the Goodwill. The charming, uplifting stories that I read over and over as a child, the books that are about as far from Frankenstein as I can get.

Let's get to it: Five Little Peppers and How They Grew. I'm reaching way back with this one (1881), but after all, who doesn't love a good rags-to-riches story?

Oh, those little Peppers. How well I remember Phronsie, Ben, Polly, Joel, and Davie, and how hard they worked in the little brown house to help their poor widowed mother, Mamsie. Margaret Sidney doesn't shy away from their poverty and hardships, and my kids are not yet at an age where they realize just how poor the Peppers are. They don't understand how deadly the measles is, and they certainly have no experience with organ grinders, but the chores, the love, the rewards — my kids are as drawn to this story as I was as a child. And I am not one to turn down an opportunity to share an example of children gladly helping their mother.

I'm not reaching back quite as far with 1943's Cherry Ames, Student Nurse by Helen Wells, but convincing my kids that nurses once wore caps and dresses wasn't easy. When I was little, I couldn't get enough of Cherry's adventures and scrapes (gosh, I love to use the word "scrapes"). It's easy to forget how groundbreaking Cherry Ames was. She had a profession when there were few jobs available to women, she never got married (actually, there were very few love interests in the entire 27-book series), and she solved mysteries when men couldn't. Cherry always knew what to do. She was smart, pretty, headstrong, and ambitious. I love her. 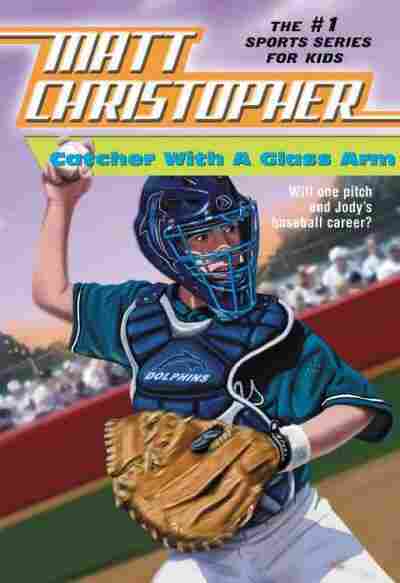 Catcher With a Glass Arm

I know the time will come when my son asks, "Come on, Mom, didn't you read any books with boys in them?" and I'll have to answer honestly: "Maybe a few." Of course I read Beverly Cleary's Henry and Ribsy, Katherine Paterson's Bridge to Terabithia, and Robert Newton Peck's A Day No Pigs Would Die, but I've wracked my brain, and if we're talking about books for boys about boys, I've come up pretty empty. (Perhaps it's because so many books about boys also feature dogs, and I do NOT read books about dogs or horses. They never end well, and I can't take it.) So, I did the only thing I could think of: I asked my husband for his advice.

Oh, the floodgates were opened, and they unleashed a wave of titles like Catcher with a Glass Arm, The Basket Counts, Catch That Pass!, and Miracle at the Plate. It was a Matt Christopher deluge; I haven't seen my husband that animated in weeks! Immediately he was off to the attic to sift through his boxes of old Sports Illustrated magazines and fifth-grade science projects, determined to lay his hands on his Matt Christopher collection. (Matt Christopher was an incredibly prolific producer of sports stories for kids, writing more than 100 books and 300 short stories in his lifetime.)

All the energy he would have spent on the NBA finals had a new focus, and he was bound and determined to introduce Catcher With a Glass Arm to a new audience — and by new audience, I mean me, as well as my son. Will Jody, who is terrified of the ball, overcome his fear? Will he get to play in an actual game? These are not small questions for a ten-year-old boy, or for his mom, for that matter.

The day will come when we can go back to the library and see what is new on the shelves, and that will be a great day. But for now, I'm not going to let any book on our shelves go to waste. It may seem that reaching for a book that's more than a century older than my kids is just as ambitious as trying Frankenstein, but I'm confident this time, I really am.