Accessibility links
Amidst The Coronavirus Pandemic, A Month To Celebrate Jazz Turns Tragic April is Jazz Appreciation Month, but in 2020, in the midst of the coronavirus pandemic that cost the jazz community many elders and working musicians, the phrase "appreciation" took a darker cast.

April was a cruel month, but the jazz community is searching for signs of light 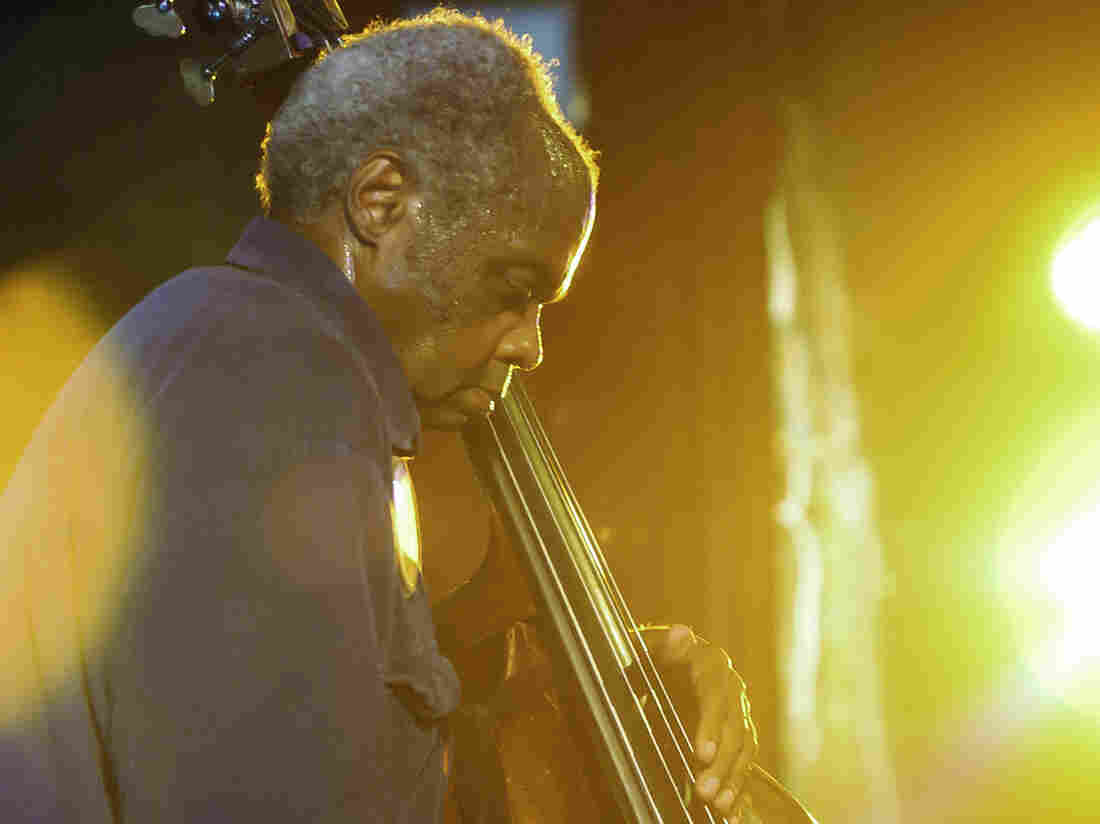 Henry Grimes performs in New York in 2003. Grimes died on April 15 at the age of 84, of complications from coronavirus. Jack Vartoogian/Getty Images hide caption 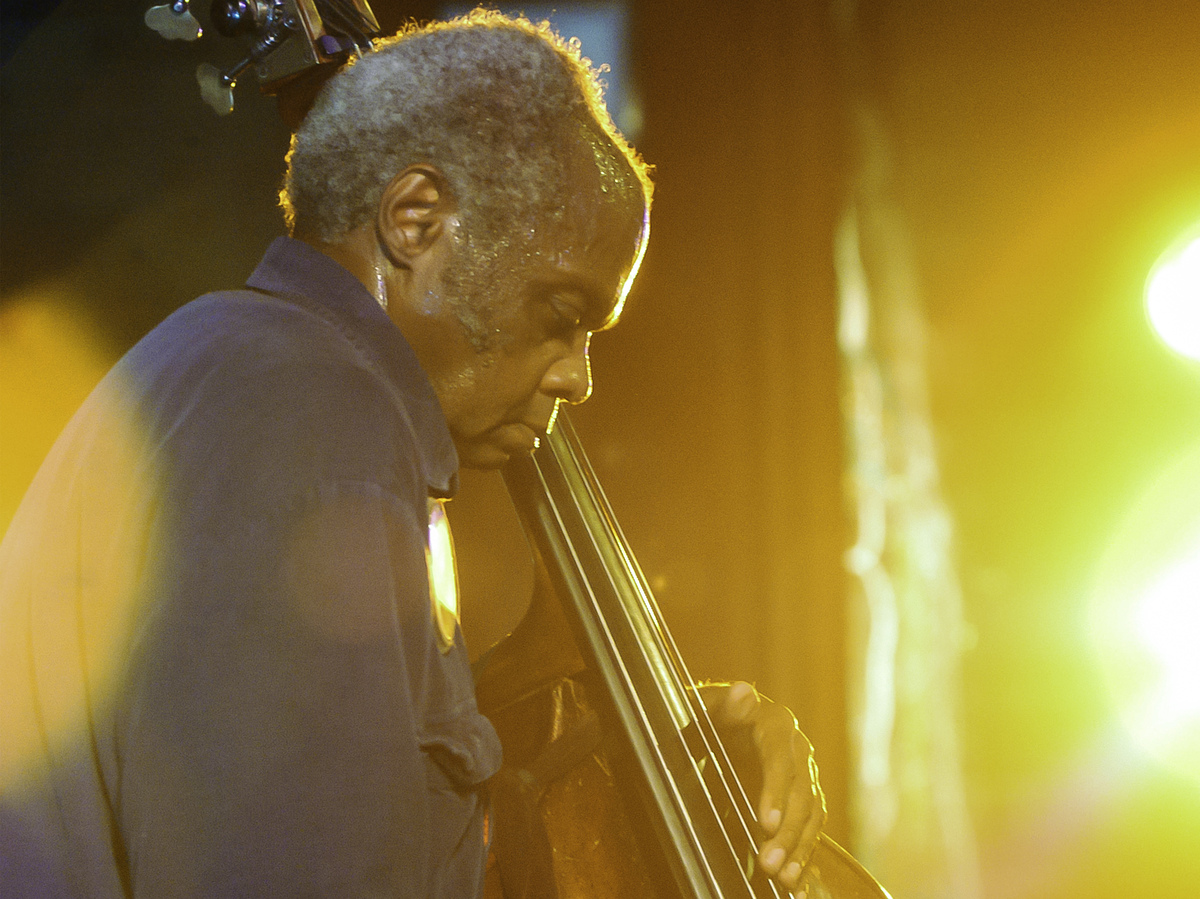 Henry Grimes performs in New York in 2003. Grimes died on April 15 at the age of 84, of complications from coronavirus.

In an alternate timeline, I know precisely how I would have spent the evening of April 17. The dynamic South African pianist Nduduzo Makhathini had been booked for an album-release engagement at Dizzy's Club, the in-house nightclub at Jazz at Lincoln Center. I was looking forward to hearing his band in that room — not only because Makhathini's stateside appearances are few and far between, but also because the urgent, questing spirit of his music is something best experienced in person and in close quarters, as a form of communion.

Here is how I spent the evening of April 17: At that point, one month into home quarantine, I had grown accustomed to the live stream as a plucky substitute for conventional performance. I was about to cue up one of those streams when I saw reports of the death of Giuseppi Logan, a multi-reedist who made his mark in free jazz. I'd just started writing Logan's obituary when my phone rang: A friend and fellow critic wanted to know whether I was working on an obit for the revered avant-garde bassist Henry Grimes. "Oh no," I said. "Henry too?"

April is Jazz Appreciation Month. As designated by the Smithsonian, it's usually marked by a joyous overspill of music in the clubs, in the classroom and across our cultural institutions. The coronavirus reset that agenda this year, to put it mildly. Among the many April events displaced by the pandemic were the NEA Jazz Masters ceremony, an official rite of commendation, and the New Orleans Jazz & Heritage Festival, a social and economic linchpin. Beyond that, "jazz appreciation" feels destabilizing and fraught in light of the month we've all just lived through. The phrase has acquired the serrated edge of an austerity measure, as spots like Dizzy's, and The Village Vanguard, and Constellation in Chicago — the essential habitat for this music, and not just for reasons of commerce — went dark with no end in sight. As an art form, this music fought hard for the institutional approval that Jazz Appreciation Month represents. In practical terms, the pomp and plaudits don't matter half as much as the organic bond that forms between musicians and an audience sharing physical space in real time. To appreciate jazz, at a moment like this, is to understand how comprehensively it has been silenced.

To a unique degree, jazz also venerates its elders, whose experience as pathfinders and pacesetters is rightly understood as an irreplaceable resource. So it was all the more devastating to absorb the mounting casualties, especially at mid-month. COVID-19 took Henry Grimes and Giussepi Logan that same week that it claimed the incorrigibly creative alto saxophonist Lee Konitz. These and other losses served as a reminder of some of the systemic vulnerabilities this pandemic has exposed, especially for the elderly, and the African American population in cities like New York, New Orleans and Detroit.

Unlike many other musical communities, in jazz, the stature of elders only grows, with deepening implications for the music. Mentorship still plays an important role in the music's evolution, and in many cases, our most seasoned artists remain in active circulation to the end: Konitz, who was 92 when he died, released a vital album within the last six months, and he leaves behind more than one generation of younger artists profoundly shaped by their time with him. Or think of New Orleans pianist Ellis Marsalis, who fell to COVID-19 on the first day of this month. His legacy flows through the countless musicians he taught and encouraged — beginning with his heirs, Branford and Wynton among them — but it's also true that a particular, embodied wisdom was lost when he passed on.

"I'm 80 years old, and I've never seen anything like this in my lifetime," pianist Herbie Hancock told me this week, speaking from his home in Los Angeles. He was referring broadly to the pandemic, but he doesn't need to be reminded of a jazz community in mourning. One early victim of the coronavirus was trumpeter Wallace Roney, who worked with Hancock on a Grammy-winning tribute to Miles Davis; Roney was 59 when he died, on the final day of March.

One of the other musicians I checked in with this month is pianist Orrin Evans, who recorded an album with Roney just a handful of days before the trumpeter entered the hospital. Evans had asked Bootsie Barnes, a veteran tenor saxophonist from his hometown of Philadelphia, to play on the same session, but due to a miscommunication, he never made it to the studio. "Oh well, I'll get Bootsie on the next one," Evans told himself, but that chance will never come; Barnes died of COVID-19 on April 22. I think of this story when I consider the heartbreaking toll of April — the lives lost, first and foremost, but also the new connections and collaborations that went unrealized, the music that went unplayed. And on a selfish note, indelible experiences like the one I'm sure I would have had with Makhathini and his band, week after week, in that alternate timeline I'm finding increasingly difficult to imagine. 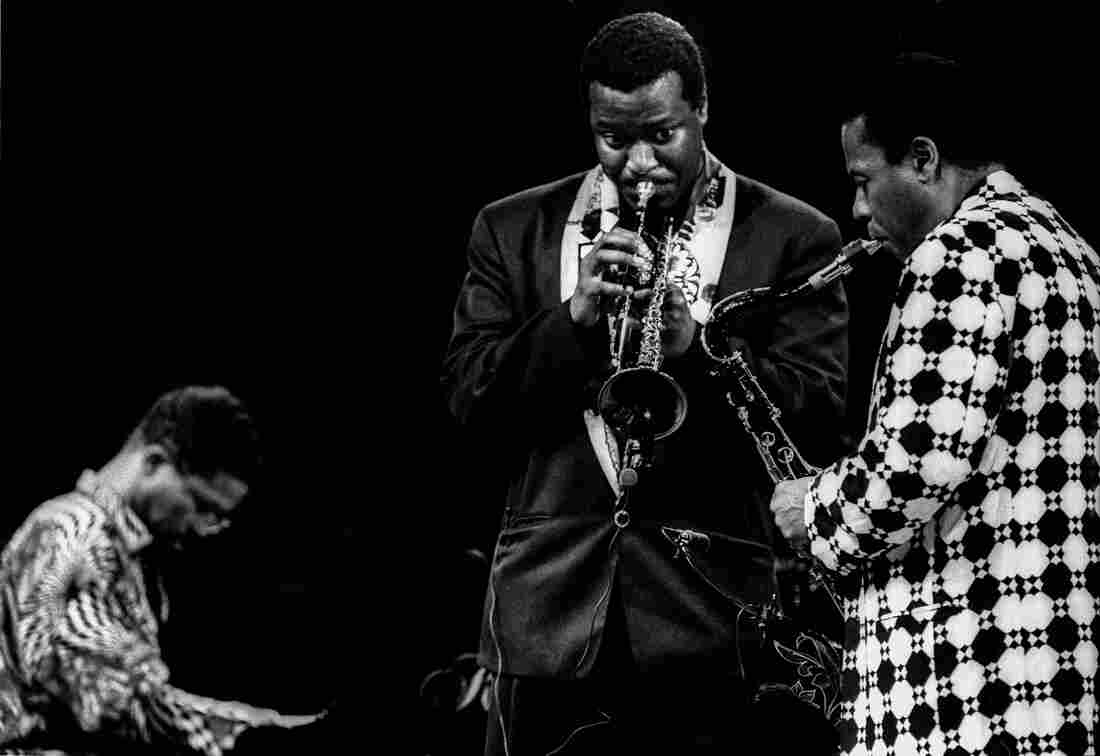 Wallace Roney (center) performing in 1992 with Herbie Hancock (left) and Wayne Shorter perform during the North Sea Jazz festival. Roney died on March 31 at the age of 59, of complications from coronavirus. Paul Bergen/Getty Images hide caption

For the last eight years, Jazz Appreciation Month has culminated in International Jazz Day, a summit of performances, panels and workshops, with a gala all-star concert as its marquee event. Hancock created International Jazz Day in his dual capacity as a UNESCO goodwill ambassador and chairman of the Herbie Hancock Institute of Jazz (previously the Thelonious Monk Institute of Jazz). The event is held in a new host city every year; its 2020 edition was supposed to take place in Cape Town, South Africa. In an alternate timeline, musicians from some 50 countries would be there now, conducting workshops and master classes and preparing for the global all-star concert.

In our actual timeline, International Jazz Day is unfolding online, with a series of streaming programs leading up to the concert, which begins at 3 p.m. ET. (I'm moderating a panel discussion at 1:30.) The concert, featuring the likes of Dee Dee Bridgewater, Dianne Reeves, Sibongile Khumalo, Lizz Wright, Cécile McLorin Salvant, Jane Monheit and Youn Sun Nah — and those are just the distinguished female vocalists taking part — will have artists beaming in from their respective homes, in a pandemic-appropriate adaptation of the usual international convergence.

In South Africa, where jazz famously helped define the soundtrack of a freedom movement, it's no stretch to talk about this music as a light in the darkness. "Our music in this current time brings some level of calmness, some level of peace, and some level of hope," Makhathini said last month, in a conversation with WBGO's The Checkout. "And maybe this will also help us, as artists, to start being a bit more deliberate about how this healing is then channeled in our music." Any student of jazz history will recognize a parallel in the music's African American root system, and the way it exemplifies grace under pressure — a quality that Albert Murray always fondly identified as the byproduct of elegance and resilience. Jazz has been a freedom music in its country of origin as well, from the early epiphanies of Louis Armstrong up through the rigorous ecstasies of Esperanza Spalding.

At the moment, there is heavy resonance in the idea of jazz as a force for good, just as there's reason to reconsider what we mean when we talk about the art of improvisation. At heart, improvisation shouldn't evoke the irresponsible word-salad of a politician at a podium, so much as the dauntless invention of a hospital staff that draws on the depth of their training to respond to an ever-changing crisis. It has been inspiring (but in no way surprising) to see musicians with instruments among the many routinely expressing gratitude to those on the coronavirus front line.

Hancock, a devout Buddhist, has a tendency to focus on the positive. He has always articulated the aim of International Jazz Day as an erasure of geopolitical and cultural divisions, and he sees all the more reason to embrace that message now. "This virus is showing us that we are a species," he said. "We are all human beings, and we all need to help each other, and we all need to work together. It's showing us, in a way, what we have in common. It's almost opening a pathway for what the future should be like."

A world of uncertainty confronts us in the months ahead: What had initially registered as a shock to the worldwide jazz ecology is shaping up to be something deeper and more challenging. We've seen organizations like Jazz at Lincoln Center reorient around online offerings: concerts from the archive, educational outreach, even a socially distanced performance by its resident orchestra. We've seen a wave of philanthropic support from MusiCares, the Jazz Foundation of America, the Louis Armstrong Foundation and others. Musicians are doing what they can — applying for grants and relief; doing live streams; giving online lessons; promoting efforts like a petition for fairness in the digital marketplace. It's all crucially important. I'm painfully aware that it isn't enough.

At Hancock's direction, every edition of the International Jazz Day global concert has concluded with an all-hands-on-deck performance of "Imagine," the John Lennon anthem. In some past years, I've regarded this finale, with its utopian pageantry and its awards-show pileup of well-meaning talent, as something to slog through rather than fully embrace — even when it comes with a few stirring highlights, as it did in Melbourne last year.

"Imagine" will almost surely provide the customary finishing flourish to Jazz Day again this year, despite the abundant ridicule heaped upon Gal Gadot and her celebrity daisy chain in the early phase of self-quarantine. I have a hunch that hearing Hancock and his assembled peers perform the song — even in coordinated isolation, as a capstone to this most unusual Jazz Appreciation Month — will elicit more poignant feelings than usual. Hancock has a point when he observes how this pandemic underscores our connections as a human family, just as he's right to suggest that music can serve as a bridge. Many of us are primed to welcome the hope and healing of "Imagine" à la Jazz Day, and to reclaim its earnest sentiment as a worthy ideal. "And the world will live as one" is a lyric that can sound platitudinous, even simple-minded, until unexpected circumstances turn the world on its side.