Accessibility links
Review: Netflix's 'Hollywood' Is A Thin Alt-History Noble-minded (and determined you don't forget that) but glibly made, the latest Ryan Murphy Netflix miniseries offers an alternate history in which brave Hollywood types change the world. 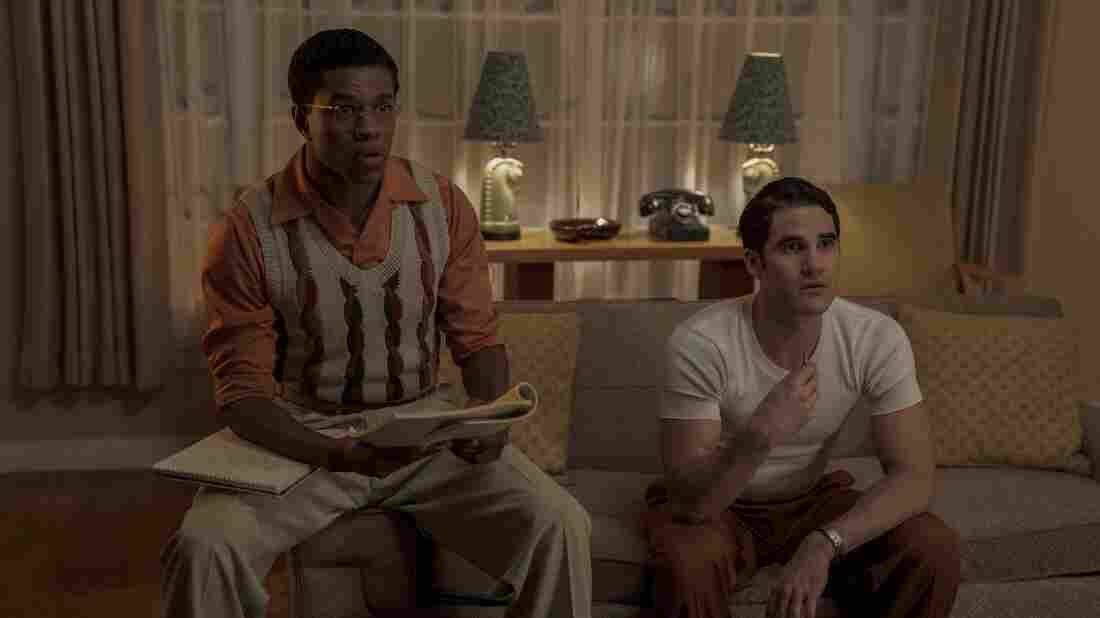 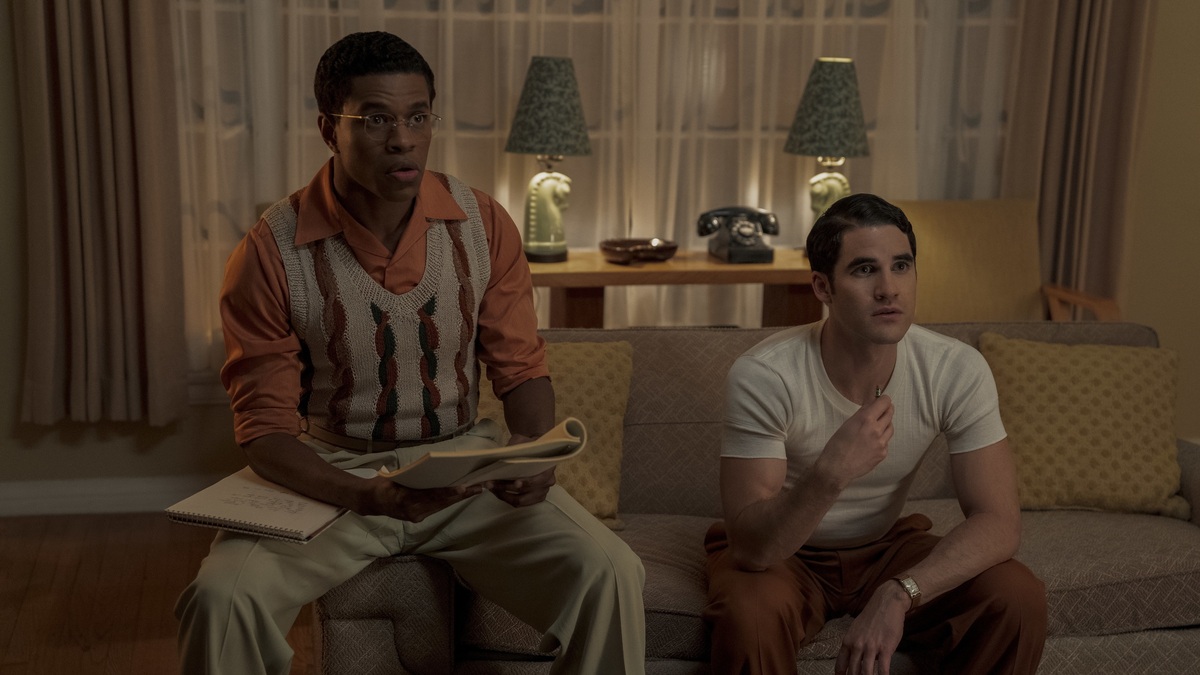 "My time in Washington," Eleanor Roosevelt (Harriet Sansom Harris) says at one point in the Netflix miniseries Hollywood, "taught me a lot of things. I used to believe that good government could change the world. I don't know if I believe that anymore. However, what you do — the three of you — can change the world."

The year is 1947. The "three of you" she's addressing in this scene are a trio of movie studio executives. The studio in question is a fictional one — Ace Studios — and the three execs are played by Joe Mantello, Holland Taylor and Patti LuPone. (Yep, two female studio executives in 1947; put a pin in that.)

The question to ask yourself before diving into the latest Ryan Murphy/Ian Brennan co-creation (after Glee, Scream Queens and Netflix's The Politician) is: Do you agree?

Do you agree that government can't change centuries of systemic racism, misogyny and homophobia, but movies (or in the situation dramatized in this miniseries — one movie) can?

Because know this: Murphy and Brennan believe it. In their bones. Their show Hollywood, which premieres Friday, believes it — its entire narrative infrastructure is built upon that notion, in fact — and it will spend its seven-episode running time striving to convince you. It will do so by positing an alternate history in which a plucky, diverse handful of brave Hollywood writers, actors, directors and producers shatter entrenched social, racial and gender barriers — accomplishing this task at a time when, in the real world, those same barriers still proved forbiddingly inviolate, and would remain so for long decades.

The result is confounding. What begins as a critique of media's tendency to cling to the same scrubbed, self-serving, cynical narratives that deny full humanity to women, people of color and queer folk becomes ... a tone-deaf paean to the Magic! Of! Hollywood!

On a purely plot level, however, it's tough to quibble with how deftly the series weaves its disparate threads together. Jack Castello (David Corenswet) is a good-looking wannabe actor in postwar Hollywood with a pregnant wife and no prospects. He falls in with slick lothario Ernie (Dylan McDermott), who runs a prostitution ring out of a Hollywood gas station. (Ernie is based on the true story of Scotty Bowers, chronicled in the documentary Scotty and the Secret History of Hollywood.)

Jack's fate will intertwine with that of the wealthy Avis (LuPone), black screenwriter Archie (Jeremy Pope) and his lunk of a boyfriend, Roy (Jake Picking). Roy, in turn, will fall into the clutches of scheming Henry Willson (Jim Parsons), who's part talent agent, part carrion bird.

Corenswet gets a lot more to do here than he did in last year's The Politician, where he was mostly expected to smolder — there's something agreeably doofy about his Jack. Parsons' character is cartoonishly loathsome, but then Murphy and his writers do love painting with broad strokes, and anyway Parsons is having a ball. Mantello, as a wise, world-weary studio exec, is great at expressing both his character's reluctant idealism and his tortured soul. LuPone gets to stretch her muscles, too, embodying her default regal hauteur in line readings full of consonants that slam shut like so many car doors, but she also finds moments of warm vulnerability.

Holland Taylor remains Holland Freaking Taylor, and that is all ye know on Earth, and all ye need to know.

Is it fun to see this ragtag gang of good-looking outsiders triumphing over cigar-chomping Old Hollywood via togetherness, moxie, gumption and a few well-acted, performatively woke monologues? Sure. But it's tough to shake the feeling that in trafficking in tidy uplift, this progressive parable is erasing the lived experience of those who — through no fault or lack of their own — couldn't and didn't manage to accomplish what these idealized, thinly drawn characters do. And though the series goes out of its way to supply moments of vindication to real-world figures mistreated by Hollywood like Anna May Wong (Michelle Krusiec) and Hattie McDaniel (Queen Latifah) — moments that are clearly intended as catharsis — in execution, they feel at best opportunistic and at worst appropriative.

Rewriting history for a better outcome isn't inherently a moral and narrative dead end. When deployed with intelligence, restraint and nuanced, fully realized emotion, it can force us to grapple with the choices we collectively made in the past. Or, when it's less layered and more pulpy, it can instead supply a sense of visceral, fist-pumping, Tarantinoesque exultation, even triumph.

Hollywood may think itself the former, but the series' approach is too lightly imagined; what it achieves is closer to the latter: Inglourious Acters.

From the days of Popular and Nip/Tuck, a sense of glibness has always marked Murphy's output; his various co-creators seem either to channel it into something a bit more grounded (Pose, American Crime Story) or to shape it into full-on, guano-crazy genre archness (American Horror Story). The genre here is "Hollywood Tale," so you'd be forgiven for expecting a touch of camp, but the tone keeps vacillating, scene to scene, between sober and swoony, as if the show can't make up its mind.

What it remains consistently throughout, however, is self-consciously well-intentioned to a fault, and absolutely certain of Hollywood's power to set a world full of benighted yokels on the right path, through the sheer power of showing us all how selfless and brave and — heck, let's face it — noble creative people are.

If there's a second season of Hollywood — and given Netflix's deal with Murphy, this seems likely — there's evidence it will only double down on season one's What If Courageous Filmmakers And Studio Suits Challenged The Status Quo dynamic. Along the way it will likely make a lot of the same very good points this season makes about the importance of representation and the idiocy of intolerance. And it will likely include some very good actors delivering on-the-nose speeches while wearing very good clothes.

And, as in season one, if you listen very closely, you will likely be able to discern a soft sound, a noise like a whisper, like a contented sigh that makes up this series' insistent, omnipresent subtext: Yes, America. You're welcome.