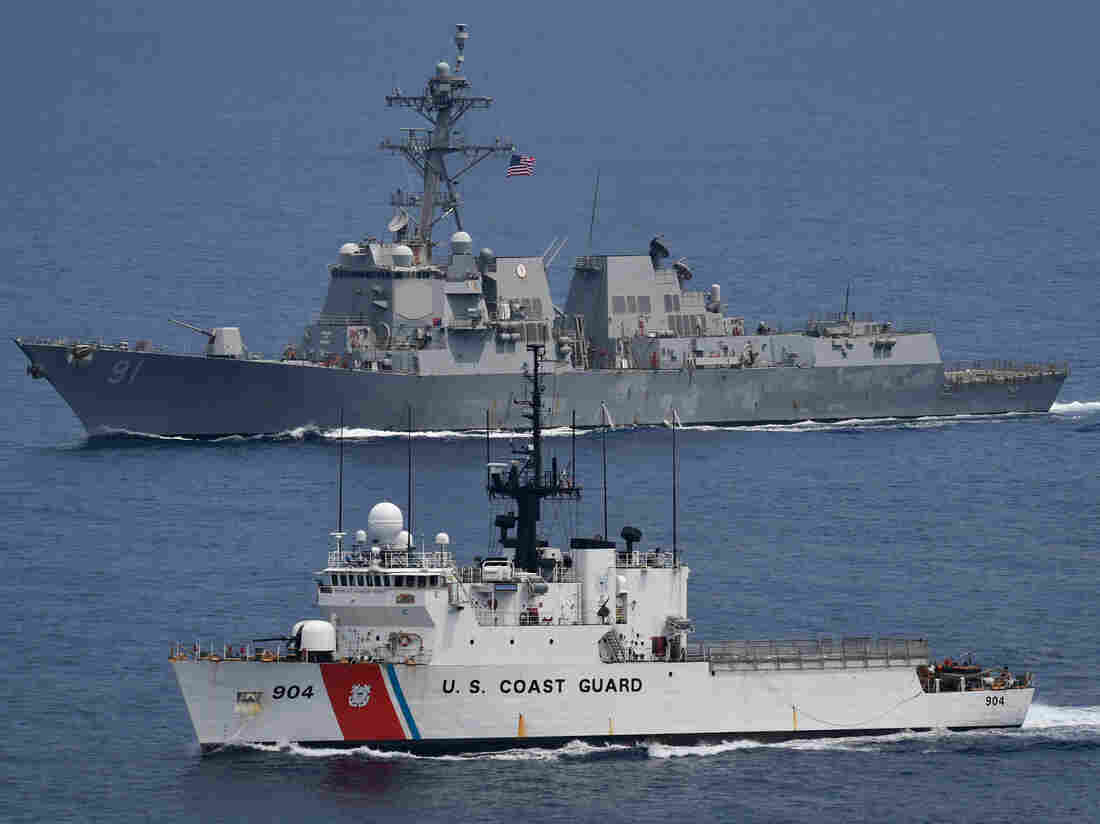 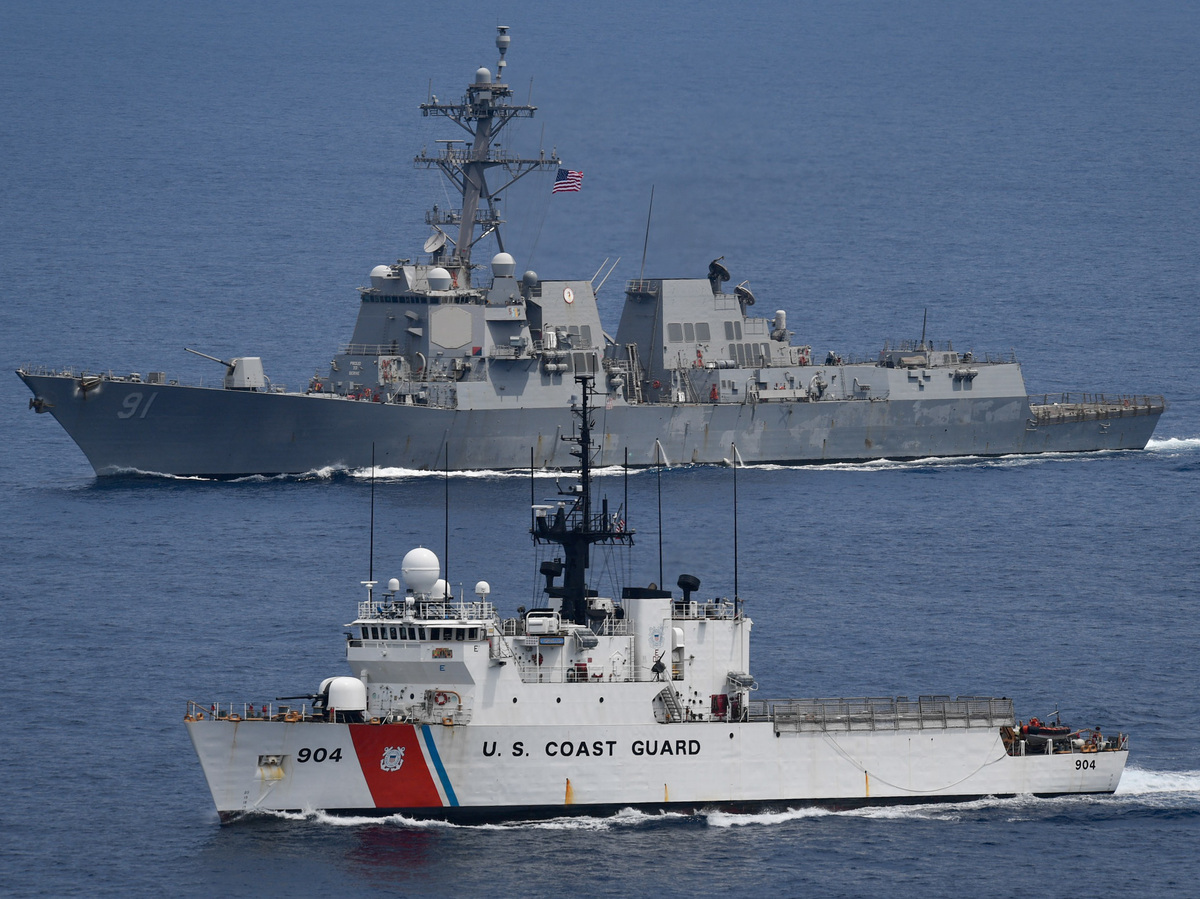 The Navy destroyer USS Pinckney and the U.S. Coast Guard cutter USCGC Northland sailed together in the Eastern Pacific on April 26. The ships are part of an "enhanced" push to stop cocaine smuggling.

American crews have seized haul after haul of drugs since the White House announced "enhanced" operations one month ago — but two broad goals of that strategy are so far unmet.

First, Venezuelan strongman Nicolas Maduro remains in power even after the new counter-narcotics gambit and other attempts by Washington to pressure what many nations consider his illegitimate regime.

Maduro and a coterie of his lieutenants even were charged by the Justice Department in connection with drug-trafficking in indictments unsealed in March, albeit with no evident effect on Caracas.

In fact, this week, Maduro appointed one of those indicted aides, Tareck El Aissami, as oil minister amid energy shortages associated with other international pressure tactics, including sanctions.

Undeterred, Secretary of State Mike Pompeo said Wednesday that the Trump administration doesn't intend to take its foot off the accelerator.

"The multilateral effort to restore democracy is continuing to build momentum," he said. "I've asked my team to update our plans to reopen the U.S. embassy in Caracas so that we are ready to go. As soon as Maduro steps aside, I am confident that we will raise that flag again in Caracas."

The second goal out of reach is easing the coronavirus pandemic via the increased drug interdiction; President Trump said on April 1 that the strategy wasn't being launched to curb the spread of the virus but that it would nonetheless contribute.

Invoking the wall on the Mexican border and the need for controlling immigration, Trump suggested that increased operations at sea also would stop significant numbers of virus-carriers attempting to come into the country. 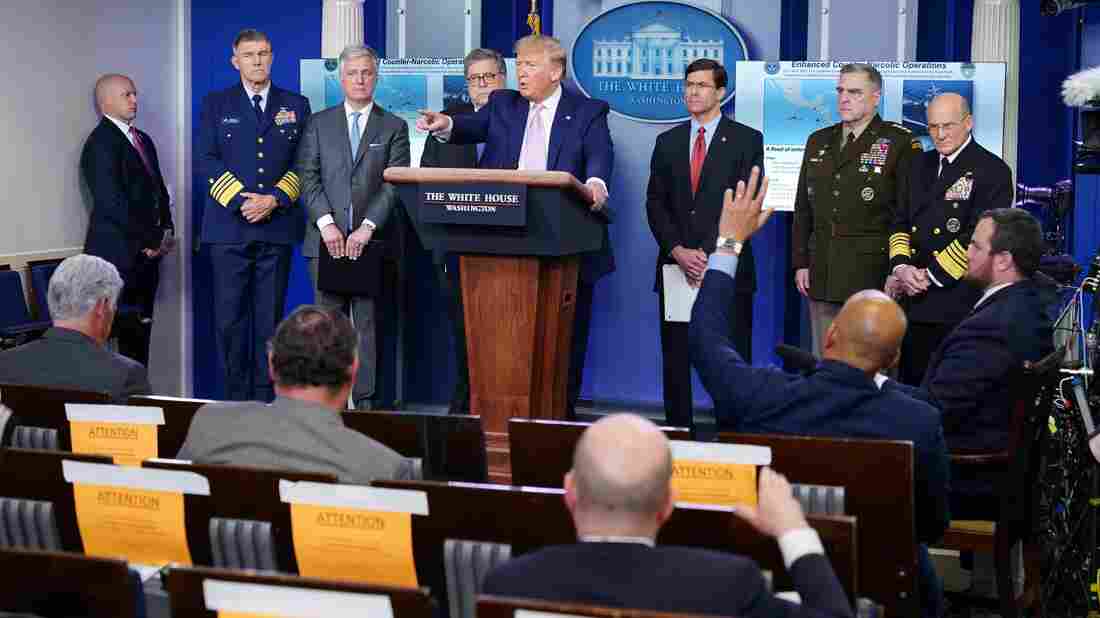 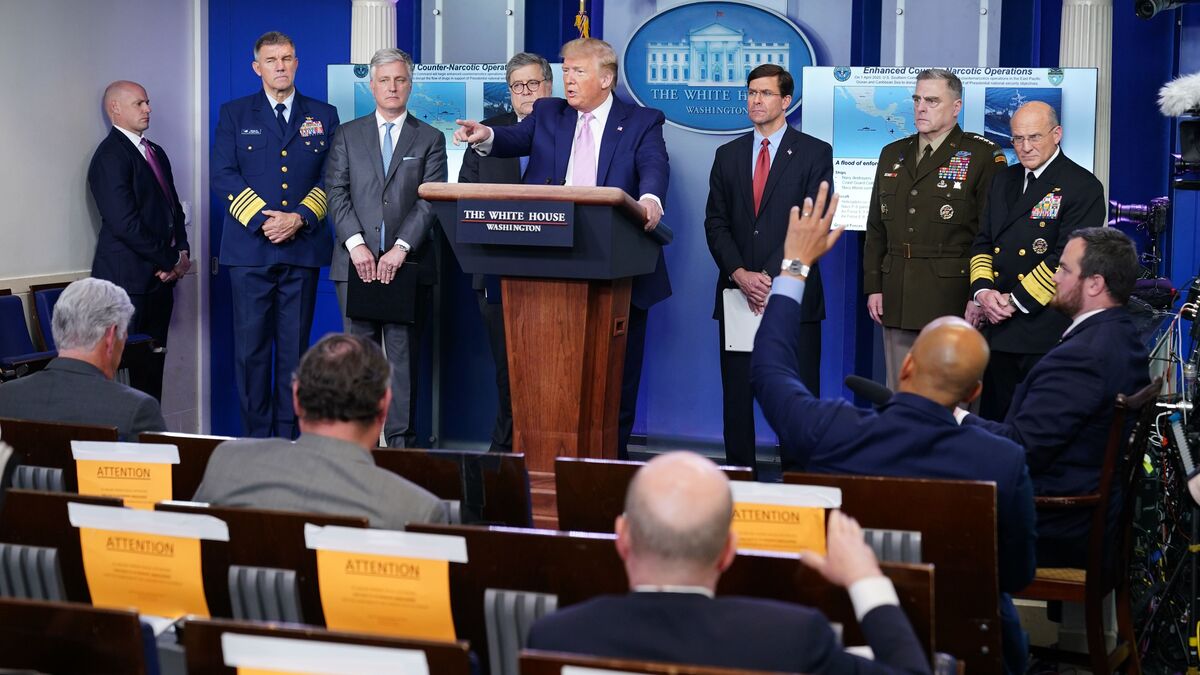 President Trump takes questions from the press during a briefing on April 1, after announcing enhanced drug operations.

"We have the best people at sea anywhere in the world, so we'll have a tremendous impact on drugs," Trump said. "But one of the other things: We'll also have an impact, we think, on the virus."

There's been no indication that American or international crews are stopping large numbers of infected people trying to sail to the United States from South America.

Venezuelan Foreign Minister Jorge Arreaza this week mocked what he called the Trump administration's attempt to pin blame on Caracas.

"That the pandemic in the United States has exceeded one million cases, with more than 60,000 painful deaths and that its economy suffers the consequences, is the sole responsibility of your government," he wrote in Spanish on Twitter. "Stop using Venezuela to hide your guilt and failure."

Boom times in the seizure game

Southern Command, the military headquarters that oversees the international effort to stanch shipments of contraband into the United States, has announced a number of interdictions and seizures.

"As for our enhanced counter-narcotics operations, the deployed capabilities are focused on monitoring for and detecting suspected illicit trafficking activities over international waters and airspace where the preponderance of detected activities involve narcotics trafficking, mostly cocaine smuggled out of South America," said Southern Command Spokesman Jose Ruiz.

Before and since April 1, U.S. and allied crews have brought in several seizures including ones valued at around $324 million worth of drugs, then $29 million, then $60 million, then $21 million and so on. More is expected.

Not everything about the effort has gone exactly to plan — two of the Navy ships allocated for it spent part of that time out of action — but the operations likely will go on. Defense Secretary Mark Esper said when announcing the deployments that he wouldn't reveal how long the surge in operations would run. 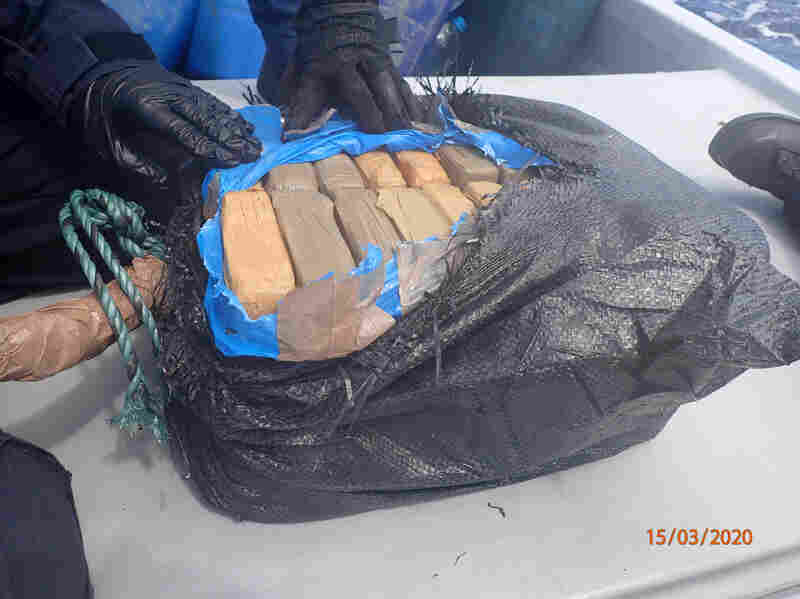 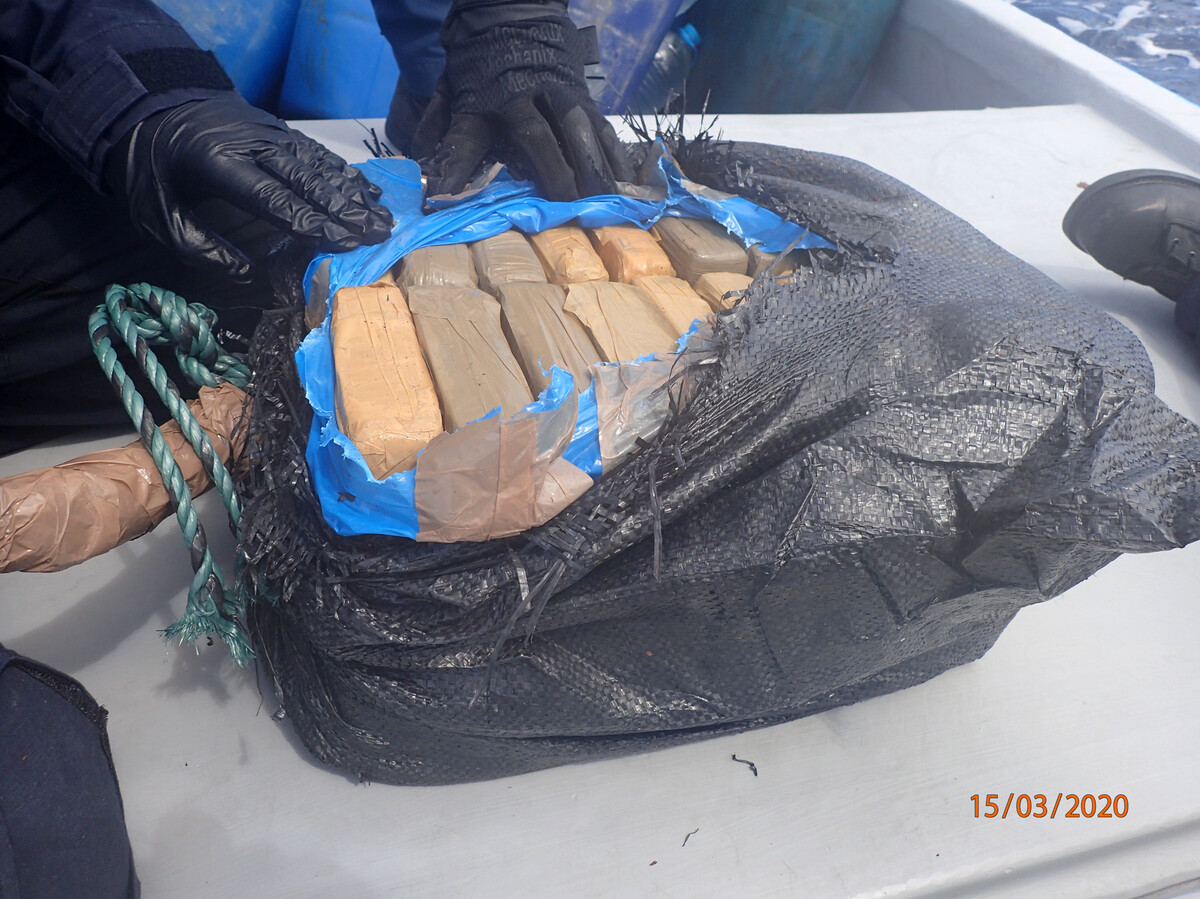 A boarding team member from the Coast Guard Cutter Steadfast opens a bale of contraband. The crew interdicted a suspected smuggling vessel in the Eastern Pacific and seized 1,252 pounds of cocaine.

Adm. Craig Faller, Southern Command's boss, announced earlier this year that he was planning a stepped-up commitment of ships and aircraft after the command had endured what he called steady cuts over time to personnel and operations. The White House highlighted that effort.

Drug smugglers ferry cocaine via sea routes in the Eastern Pacific and the Caribbean, as well as in shipments via air and over land.

Joint Interagency Task Force-South, part of Southern Command, knits together intelligence from U.S. and international sources about those shipments and tries to stop them.

Authorities say the work of the task force is the single most productive barrier to the entry of cocaine; it seized around 280 metric tons last year — "almost four times the cocaine seized by all domestic and border enforcement efforts combined," Faller told Congress earlier this year.

Military officials say this imposes costs on cartels and smugglers. In the case of Venezuela, it saps cash from Maduro and his cronies, officials say. But they also acknowledge how much contraband they miss.

U.S. officials say they're confident they detect most of the vessels or aircraft making smuggling runs toward the United States, but they seldom have are enough units to intervene. Authorities can intercept only about 9%, they believe.

That's why Faller and the military were eager to deploy more ships south this spring.

"This drives a sense of urgency with which we must fight together on this national security threat," he told reporters on a conference call. "These transnational criminal organizations are undermining security in the United States and our partner nations, killing over 70,000 people per year just on the impacts of drugs alone in the United States."

This year, the Pentagon made more Navy ships available including destroyers and a littoral combat ship, a smaller and swifter new type of vessel that has struggled to overcome earlier developmental problems.

They aren't fully resolved; the littoral combat ship USS Detroit pulled into Key West, Fla., in late March for what the Navy called "emergent repairs" and stayed there for much of April.

And one of the destroyers assigned to the stepped-up effort, the USS Kidd, returned to San Diego this week after an onboard outbreak of COVID-19 sickened a number of crew members.

Other gray-hulled ships, including the destroyer USS Pinckney, remain on the counter-drug assignment along with the Coast Guard vessels and other allies that normally take part.

This week, the Coast Guard announced that one of its cutters, the USCG James, joined with a Navy coastal patrol vessel, the USS Tornado, to stop and board a Venezuelan fishing vessel.

USCGC James led a joint boarding with @USSTornadoPC14 on a Venezuelan fishing vessel supporting @SOUTHCOM and Presidential National Security Objectives to stem the flow of narcotics to the U.S. from South and Central America. #counterdrugops @NAVSOUS4THFLT @USCGLANTAREA @USCG pic.twitter.com/0vMG3bTLM7

Venezuela's government isn't the only critic of these efforts.

American reform groups long have argued the "war on drugs" is a waste of effort and more recently that Trump has compounded that mistake by trying to pair it with foreign policy targeting Maduro.

Kassandra Frederique, managing director of policy advocacy at the Drug Policy Alliance, likened the approach to ones she said already have failed elsewhere.

"Not only are these actions irresponsible given the current public health crisis we are in, but escalating the international drug war repeats the same misguided military response the U.S. has supported globally, which has harmed and destabilized countries like Colombia, Afghanistan and Mexico — all the while failing to reduce drug supply or drug use," Frederique said in a statement.