Accessibility links
Coronavirus And The Election: Can This President Be Reelected? In the extraordinarily volatile environment of this pandemic-election year, even a nightmare economy may not be as fatal for the incumbent as it would have been in the past.

Can This President Be Reelected In An Economy This Bad?

Can This President Be Reelected In An Economy This Bad? 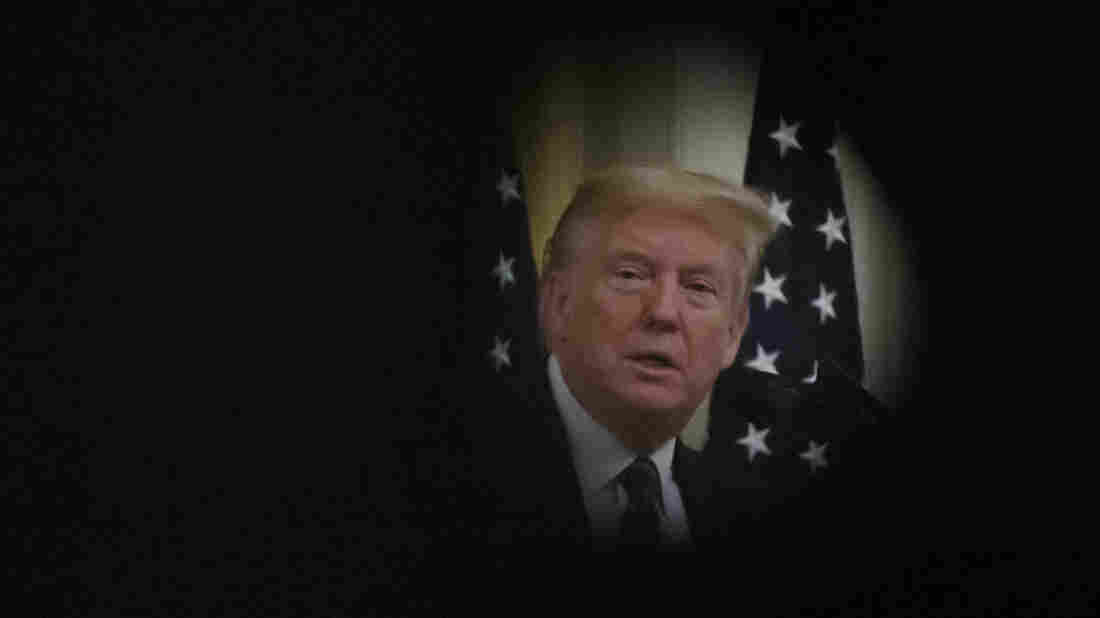 President Trump speaks about protecting seniors, and the coronavirus, in the East Room of the White House on Thursday. Alex Brandon/AP hide caption 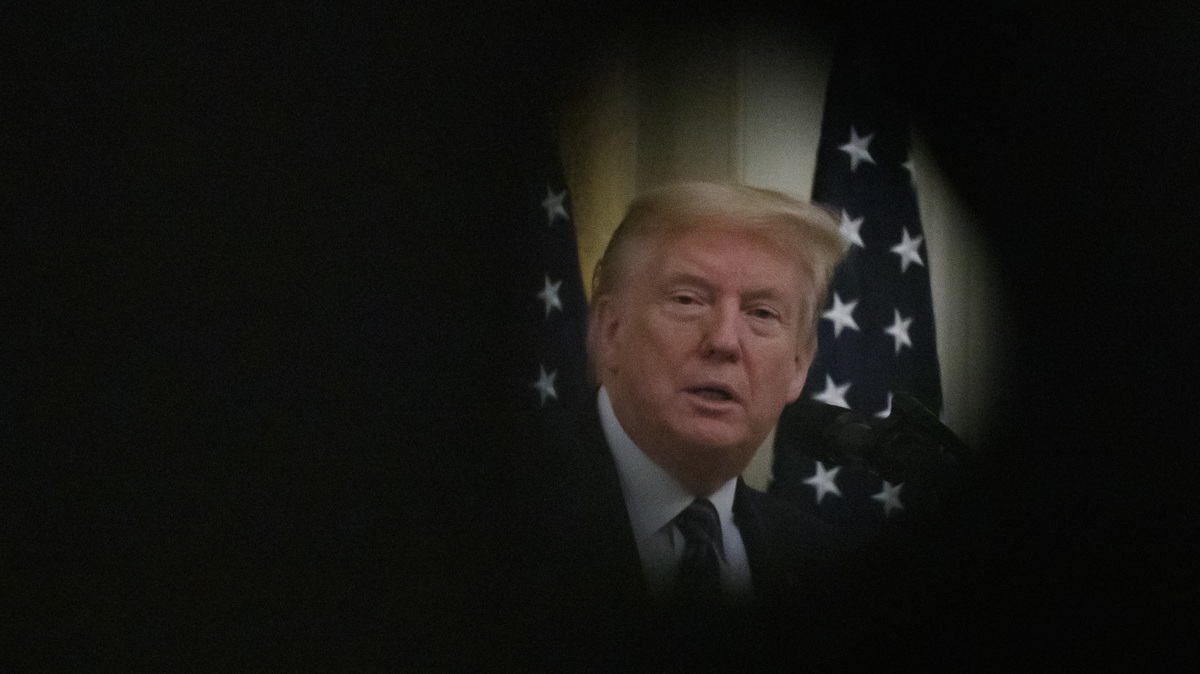 President Trump speaks about protecting seniors, and the coronavirus, in the East Room of the White House on Thursday.

As April began and Americans were being told to fear COVID-19 and stay home, President Trump said there would not need to be a "massive recession." As recently as Monday, he said the economy would have "a tremendous third quarter." By Wednesday, he was looking forward to "a fourth quarter that's going to be fantastic" and then to "a tremendous 2021."

The moving time frame for the hoped-for recovery reflected a shifting of the president's rhetorical gears now that the recession has hit with hurricane force. The devastating numbers now emerging — including that 30 million have applied for unemployment in the past six weeks — have the White House eager to move from containing the virus to containing its damage to the economy.

The first shuttering of businesses and workplaces in March was enough to drag down economic growth for the whole first quarter by 4.8% (as an annualized rate), by the administration's own numbers. And forecasters at the nonpartisan Congressional Budget Office this week said the second quarter could see the economy shrink by 30% or more.

The receding date of arrival for Trump's self-described "rocket ship" recovery is all the more notable given his tendency and talent for putting the best face on things. And the need for positive thinking could scarcely be greater than it is now.

The president and his team are arguing that the COVID-19 crisis has peaked and will subside as a threat to public health. But they know the economic fallout from the disease (and a worldwide oil price collapse) has only begun – and that may well be the greater threat to the president's political health.

Scholars and political strategists generally agree there is nothing more important for a president's reelection prospects than the state of the economy. Presidents with a robust economy routinely win a new term. Those without, as a rule, do not.

In an article published in mid-March by the University of Virginia, political scientist Alan Abramowitz said a recession in the second quarter would point to defeat for Trump, or any incumbent president — possibly a defeat of "landslide proportions."

We may have forgotten the significance of recessions in part because the last three presidents (Barack Obama, George W. Bush, Bill Clinton) all won a second term after avoiding a recession in the latter half of their first. That allowed each of them to point to improving economic conditions and to do so plausibly and persuasively.

In the most recent example, Obama could point to three years of growth out of the deep recession of 2008-2009, brought about by the mortgage-and-credit crisis and market collapse of 2008.

At the time of Obama's reelection in 2012, it was often said that no president had been reelected with unemployment as high as it (still) was in that year. Statistically, that was true, but the sense of upward trajectory, reflected in crucial consumer confidence numbers that fall, buoyed the incumbent.

There were signs this week that Trump is preparing to adopt a similar strategy. In this formulation, instead of downplaying the negative, the president would be cast as the leader most equipped and best positioned to turn things around.

The next best thing to good times may be a promise of good times ahead with the right hand on the tiller. But as a campaign theme, this one's track record is mixed. "Prosperity is just around the corner" was a slogan for President Herbert Hoover in 1932 in the depths of the Great Depression, just before he was crushed by Franklin D. Roosevelt.

While Hoover's predicament may have been uniquely hopeless, other incumbents have struggled when reelection campaigns coincided with weak or recessionary economies.

Much depends on when a recession begins or when it has ended. There needs to be time for the recovery to take hold, to move beyond technical measurements to a general sense of confidence. That is especially true in the current economy, 70% of which is consumer spending.

Feelings of confidence may have been the critical issue for the last U.S. president who was denied a second term, George H.W. Bush. A recession in late 1990 and early 1991 had long been over by Election Day, a fact the Bush team kept trying to drive home. But the downturn was worse and more persistent in some critical swing states, and its hangover (including relatively high unemployment into the second quarter of 1992) haunted the Bush campaign all year.

In one sense, the first president Bush should have known better. He had been the Republicans' running mate in 1980 when Ronald Reagan won 44 states asking people: "Are you better off than you were four years ago?"

Carter himself had reached the Oval Office four years earlier talking about the "misery index" of unemployment, high interest rates and inflation. That combination had been too much for the incumbent of that time, Republican Gerald Ford.

A Staggering Toll: 30 Million Have Filed For Unemployment

A few presidents have survived poor economic conditions that ended in time for them to recover (Calvin Coolidge in 1924) or began too late for the full force to be felt by Election Day (Harry Truman in 1948). William McKinley was reelected in what was at least a weak economy in 1900.

But this is where historical arguments can begin. Did McKinley defy the economic imperative in 1900 or ride the popularity of the American victory in the Spanish-American War? Or was it the weakness of his Democratic opponent, William Jennings Bryan?

Was Coolidge spared in 1924 because the Democrats took weeks to choose a nominee against him? Did Truman win in 1948 because the recession had just begun or because people did not blame him for it or because Republican nominee Thomas E. Dewey scarcely campaigned?

These questions are not only of historical interest. All predictions regarding the effect of the COVID-19 economic collapse on Trump's prospects must also consider other factors. In this case, will the Democrats' perennial disunity and the lack of a traditional convention sap their voters' enthusiasm? Will the virus be around and playing hob with turnout rates in November?

Even more worrisome for Trump's opponents are the travails of Joe Biden's campaign. A sexual assault accusation and attacks speculating about the 77-year-old's health have clouded his campaign since he secured an apparent first-ballot nomination earlier this spring.

In the extraordinarily volatile environment of this pandemic-election year, even a nightmare economy may not be as fatal for the incumbent as it would have been in the past.