Accessibility links
NASA Names Firms In Competition To Build Next-Gen Lunar Lander Elon Musk's SpaceX, Jeff Bezos' Blue Origin and Dynetics, a Huntsville, Ala.- based firm, will share $967 million to develop a vehicle to get astronauts to the moon's surface by 2024. 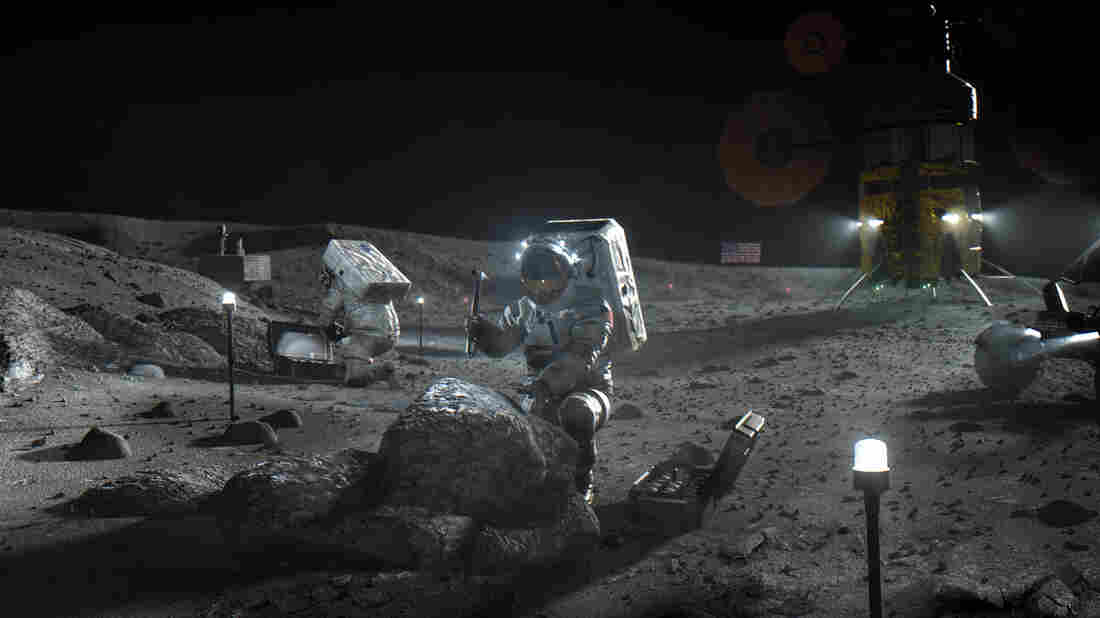 This illustration made available by NASA in April 2020 depicts Artemis astronauts on the Moon. On Thursday, NASA announced the three companies that will develop, build and fly lunar landers, with the goal of returning astronauts to the moon by 2024. NASA via AP hide caption 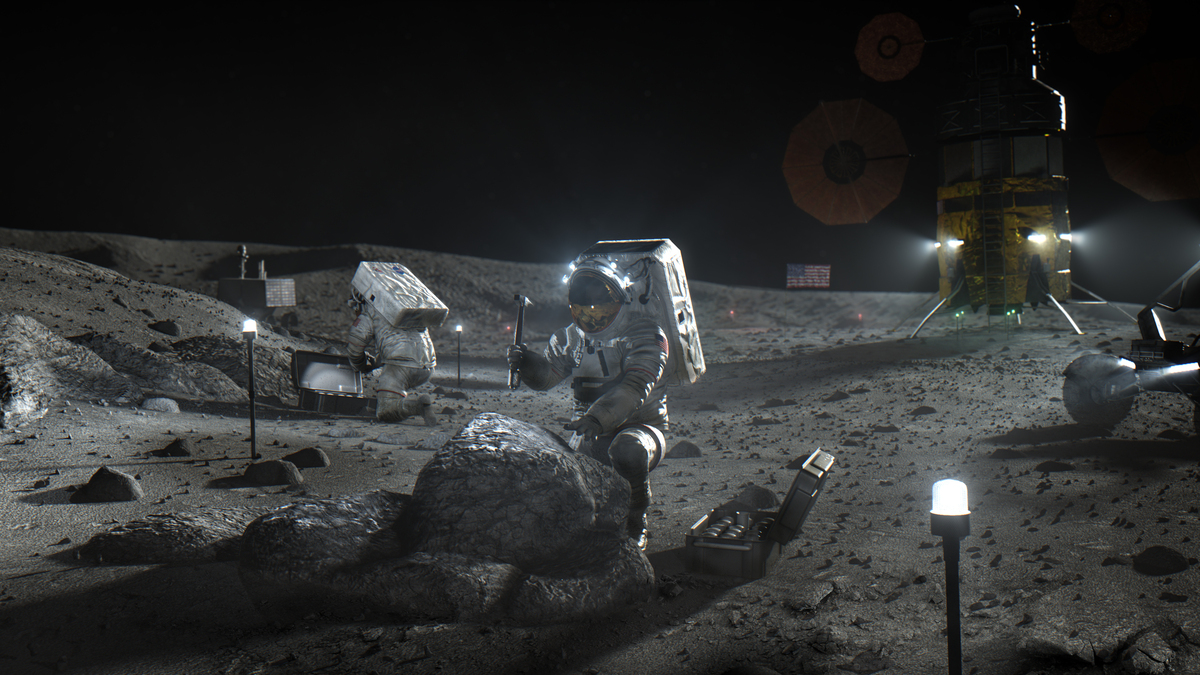 This illustration made available by NASA in April 2020 depicts Artemis astronauts on the Moon. On Thursday, NASA announced the three companies that will develop, build and fly lunar landers, with the goal of returning astronauts to the moon by 2024.

NASA has selected three companies to develop the first vehicle in more than 50 years to put humans on the moon, with space firms run by billionaires Elon Musk and Jeff Bezos among the competitors.

Musk's SpaceX, Bezos' Blue Origin and a third company, Dynetics, a Huntsville, Ala., subsidiary of Leidos, will share $967 million in development money from NASA to flesh out concepts for the landing component of the Artemis program, which the space agency hopes will get it back to the moon by 2024.

Two other companies that put in bids, Boeing and Vivace, were edged out.

"This is the first time since the Apollo era that NASA has direct funding for a human landing system, and now we have companies on contract to do the work for the Artemis program," NASA Administrator Jim Bridenstine said, calling the lander the "last piece that we need in order to get to the moon" by 2024.

The last American astronaut to walk on the moon was Apollo 17's Eugene Cernan, who left the last human bootprint there on Dec. 14, 1972, 2 1/2 years after Neil Armstrong's famous "one small step."

With Artemis, NASA has promised that the first woman will step foot on the lunar surface and there's already speculation on which of the space agency's veteran female astronauts might be the one.

Over the next 10 months, each of the three companies announced on Thursday will refine their concept and NASA will choose the most promising.

SpaceX has been selected to develop a lunar optimized Starship to transport crew between lunar orbit and the surface of the Moon as part of @NASA’s Artemis program! https://t.co/FRmwWisKfH pic.twitter.com/z1bkUrQMK8

The competing concepts couldn't be more different. SpaceX's is based on its Starship rocket currently under development and resembles some of the pre-Apollo ideas about how astronauts would land on the moon, with one large rocket landing vertically on the surface.

The NASA news release does not specify award amounts, but here they are:

NASA chief says awards to not reflect ranking or preference.https://t.co/XwrB4Xo5F2

According to concept drawings, Blue Origin's lander would use the same basic idea as the old Apollo lunar module — a two-part vehicle that lands and then lifts off from the surface using the bottom portion as an expendable launch pad.

.@Dynetics is working with a robust team of more than 25 subcontractors. Their two-stage lander concept includes a single element with ascent / descent capabilities and a unique crew cabin that sits low to the Moon’s surface. pic.twitter.com/S6M8FDWWQb

Both of those concepts, however, would require astronauts to descend from their spacecraft a fairly long way to the surface. Starship's crew compartment would be so high, in fact, that astronauts might be required to use an elevator to reach the moon.

By contrast, the Dynetics lander is low and would require astronauts to take only a few steps to reach the surface.

Blue Origin is reportedly getting more than half the development pie, $579 million, with Dynetics at $253 million and SpaceX trailing with $135 million.

NASA's planned Lunar Gateway, a vehicle in orbit around the moon with living quarters for astronauts, a science lab and docking ports for visiting spacecraft, won't be ready for the first landings but will be used later to achieve "a regular cadence of missions using commercial services contracts later in the decade," NASA says.

In a teleconference with journalists, Musk enthused about the "potential for an incredibly exciting future in space with a base on the moon and ultimately sending people and having a self-sustaining city on Mars."

Dynetics' vice president of space systems, Kim Doering, said the company is excited about the first mission in 2024 but also about the longer-term development of the moon as a commercial venture.

Bob Smith, the CEO of Blue Origin, called it a historic day, saying that "going to the moon is the reason why we got into this business."

Later this month, NASA plans to launch two astronauts from Cape Canaveral, Fla., for the first time since the end of the space shuttle program in 2011 left the U.S. without its own human space-launch capability.

On May 27, SpaceX's Crew Dragon, a newly developed vehicle designed to ferry astronauts to and from the International Space Station, is scheduled to blast off from the Cape with astronauts Bob Behnken and Doug Hurley aboard.