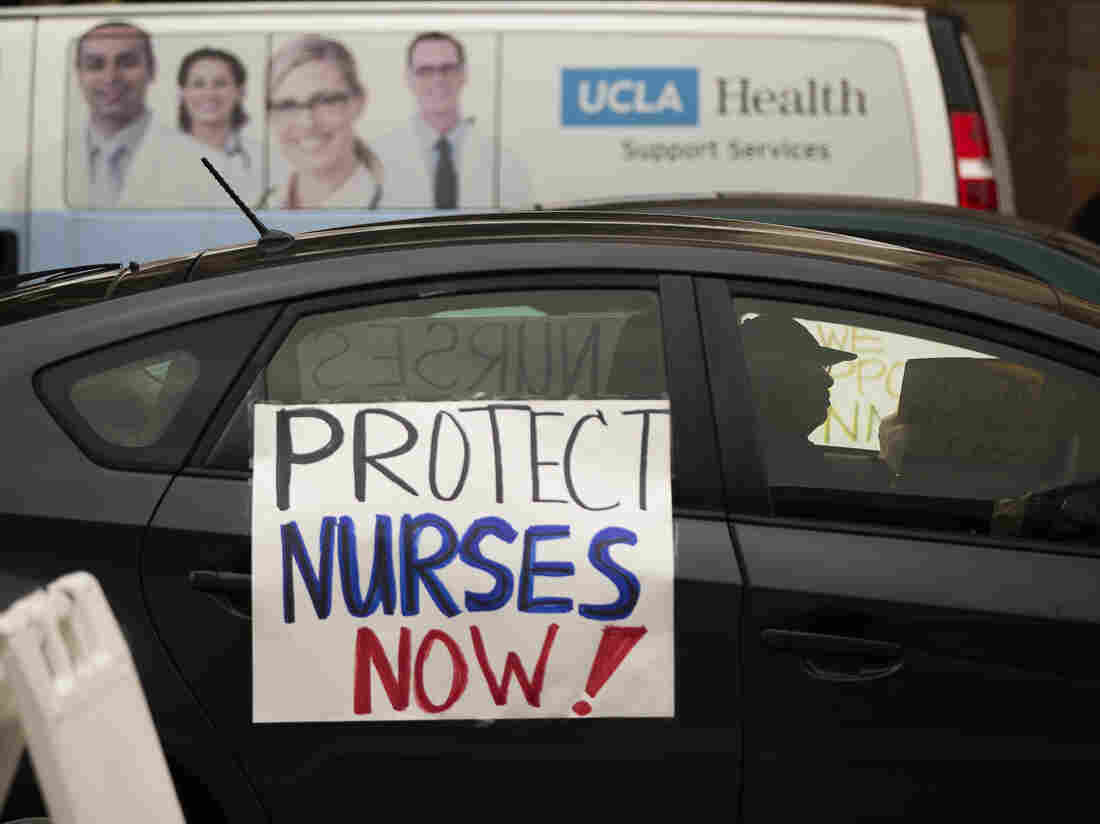 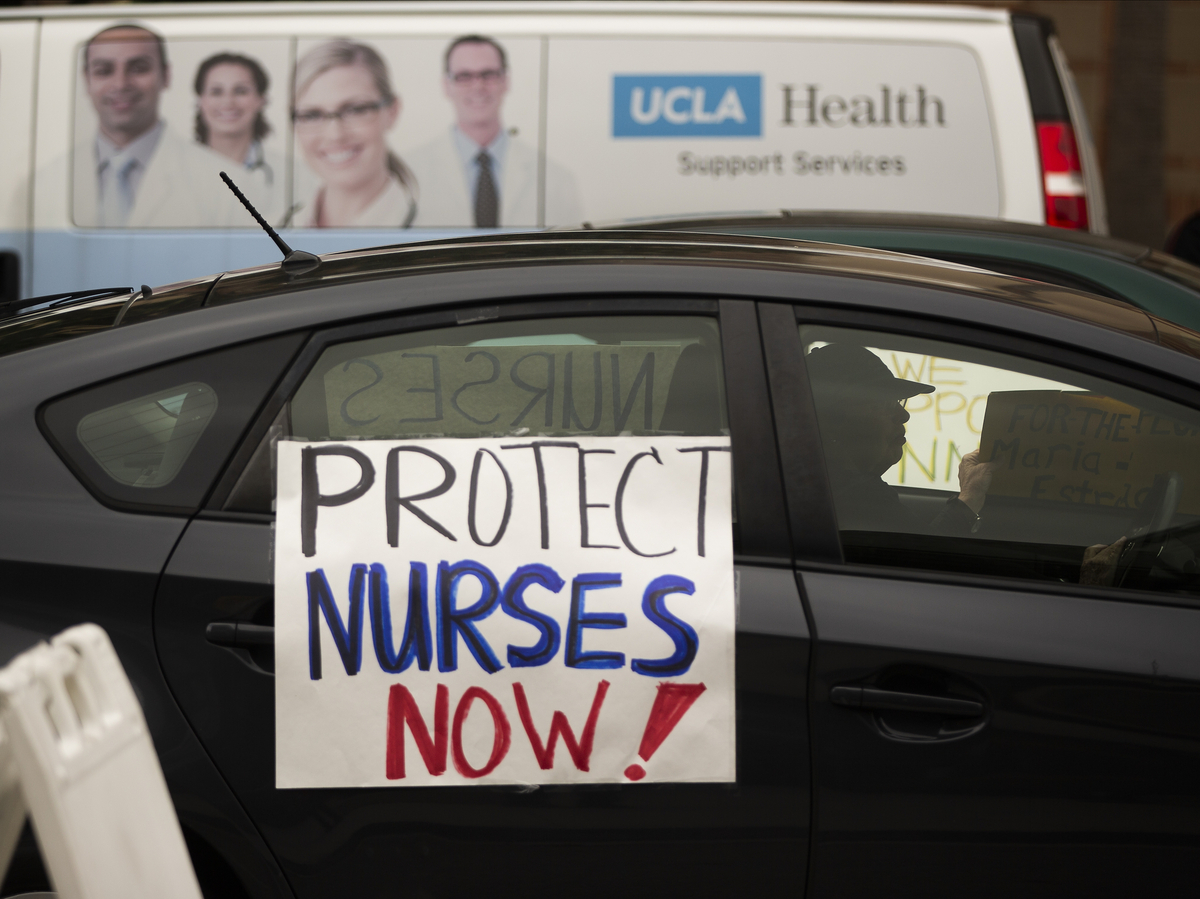 Health care workers drive by to express their support for nurses needing personal protective equipment outside the UCLA Medical Center in Santa Monica, Calif., on April 13.

When the first crush of people sick with COVID-19 turned up at Montefiore Medical Center in the Bronx, Benny Mathew says managers issued him and other nurses two N95 masks per week. Instead of throwing protective masks away after treating contagious patients, they stored them in paper bags.

"There's no way you're not getting it if you are working in the emergency room with the bare minimum protection," Matthew told NPR. He tested positive for COVID-19 on March 21 and said many of his co-workers got sick on the job.

"Some of them were in the hospital for almost a week," he said. "Nurses carried this virus home and made their partners, kids and parents sick."

At least 9,000 front-line nurses and other medical workers have contracted COVID-19, according to the Centers for Disease Control and Prevention. Federal agencies say dozens of nurses and other care providers have died.

NPR wanted to understand how this situation happened. How did the best-funded health care system in the world wind up sending nurses into wards full of people sick with a mysterious new respiratory virus without basic personal protective equipment?

The first warning signs emerged in early February, weeks before COVID-19 erupted in the United States. Tedros Adhanom Ghebreyesus, director-general of the World Health Organization, then warned of a "severe disruption" in the PPE supply chain.

"Demand is up to 100 times higher than normal," Tedros said. "There are depleted stockpiles and backlogs of four to six months. Global stocks of masks and respirators are now insufficient to meet the needs."

The U.S. relies on that same global supply chain, and some front-line medical workers appeared worried.

In an interview with NPR in late February, Castillo said her organization had surveyed nurses working at hospitals across the country. They reported a troubling lack of personal protective equipment.

"Only 30% of the nurses are saying that there are sufficient supplies in stock," Castillo said.

During those crucial early weeks of the pandemic, President Trump was sending a different message, downplaying the threat of COVID-19 in the United States.

"By April or during the month of April, the heat, generally speaking, kills this kind of virus," Trump said Feb. 10. "So that would be a good thing. But we're in great shape in our country."

"Everyone I've spoken to has taken substantial steps to make sure they are prepared," Nancy Foster of the American Hospital Association said in an interview with NPR in late February.

But NPR found that as the coronavirus took hold in the U.S., many federal agencies were aware a PPE shortage was looming. The CDC began urging hospitals to ration masks and gowns. The CDC and other federal agencies also relaxed safety guidelines, allowing PPE to be reused and making it possible for hospitals to use masks approved for construction workers.

Meanwhile, NPR found little was being done to expand the overall supply of masks, gowns and other PPE. As factories in China shut down, the Trump administration was still reporting no "widespread shortages" of medical supplies in the United States. On Feb. 27, 20 days after the WHO announced its warning, the U.S. Food and Drug Administration issued a public notice acknowledging COVID-19 would "likely impact the medical product supply chain."

Even then, in late February and early March, little was done to expand domestic production of personal protective equipment to supplement scarce overseas supplies. In an interview with NPR last week, the American Hospital Association's Foster acknowledged hospitals were slow to grasp the scale of the problem.

"I think what none of us anticipated as fully as we should have is that a pandemic such as this one would cause a worldwide demand," she said.

Foster said hospitals urged Trump to use his authority under the Defense Production Act to force companies "to really ramp up the ability of this country to make PPE," but that request from the AHA and other health care groups didn't happen until March 21, well after rationing of masks and gowns had begun.

The Trump administration has used the Defense Production Act sporadically during this crisis and instead has worked with companies on a voluntary basis. The Federal Emergency Management Agency also moved in late March and early April to buy more masks and gowns overseas, often competing with hospitals and states for the same scarce equipment. In late March, Trump suggested adequate PPE supplies already existed and were being stolen or misallocated.

"I don't think it's hoarding," he told reporters. "I think it's maybe worse than hoarding."

NPR could find no evidence of widespread theft or misuse of PPE. Efforts to boost supplies didn't begin until weeks after the first warnings were sounded, and the government push to find new suppliers was often confused, pitting agencies against one another.

By April 8, the Trump administration announced that the national stockpile of protective equipment was 90% depleted and remaining supplies would be kept in reserve. The hospital industry acknowledges that even now, "critical" PPE shortages remain. Meanwhile, the federal Department of Veterans Affairs system of hospitals and clinics is still using "austerity" measures to ration masks and gowns.

National Nurses United's Castillo, who raised the alarm about PPE in February, said nurses are angry. She said they fear a second wave of COVID-19 patients will hit before hospitals are ready.

"Nurses are not afraid to care for our patients if we have the right protections," she said. "But we're not martyrs sacrificing our lives because our government and our employers didn't do their jobs."