Accessibility links
Alabama Boutique Owner On Reopening: 'I Don't Know What To Expect' As states re-open economies, small businesses try to figure out how to do it safely amid the pandemic. But entrepreneur Jo Hood of Jane Loves Shoes says, "Any business would be better than none." 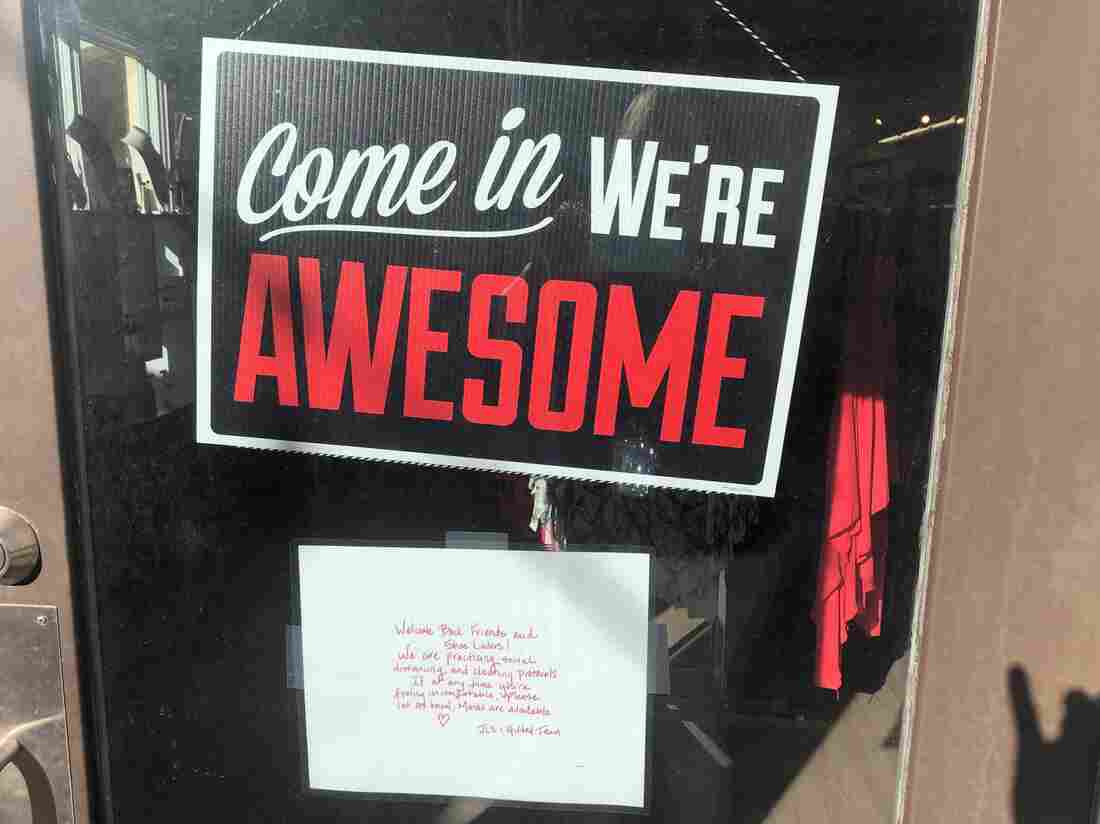 The store, Jane Loves Shoes, in Orange Beach, Ala., is posting signs to let customers know about new safety measures. Businesses in the state can only operate at half capacity. Debbie Elliott/NPR hide caption 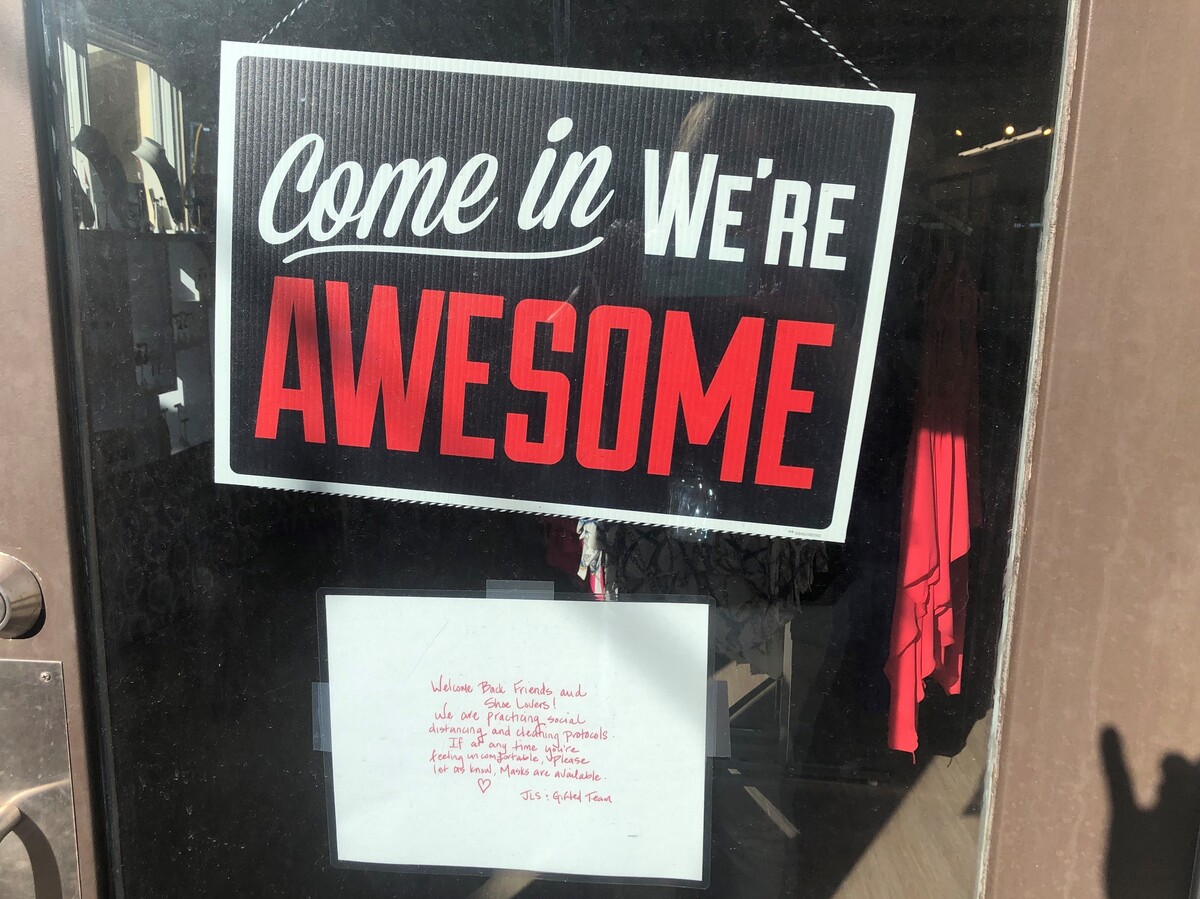 The store, Jane Loves Shoes, in Orange Beach, Ala., is posting signs to let customers know about new safety measures. Businesses in the state can only operate at half capacity.

"It's time," he says before propping open the door at Jane Loves Shoes, a women's boutique named for and owned by Hood's wife Jane. They have three small storefronts in this outdoor shopping center in Orange Beach – a resort town on the Alabama Gulf Coast. They sell shoes, women's clothing, accessories and gifts.

Hood says he wanted to open as soon as it was legal as a ceremonial gesture after being closed for more than a month.

"I'm not sure what to expect," he says. "But any business would be better than none."

The question facing Hood and thousands of other small businesses around the country is whether people are ready to shop again in a pandemic.

Some states are beginning to ease restrictions on commerce imposed to stop the spread of the coronavirus. In Alabama, beaches have opened up, and retail stores are now allowed to operate at half capacity. Restaurants are still limited to take-out or delivery only.

Tourists – a key customer base – are returning. You can see it in the parking lots at the public beaches and grocery stores – car tags from Louisiana, Georgia, Tennessee, Arkansas, Michigan, and Virginia. 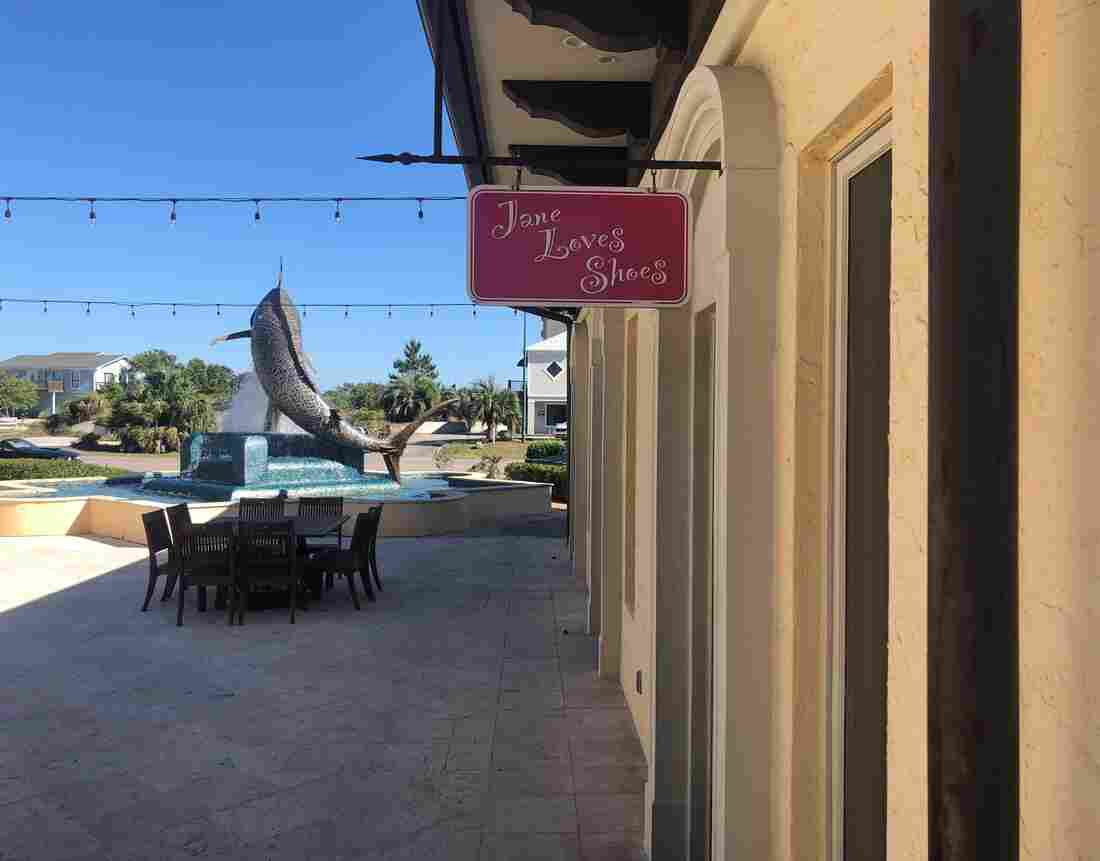 The women's boutique Jane Loves Shoes in Orange Beach, Ala., has been closed for more than a month because of the state's stay-at-home order closing most retail stores to slow the spread of coronavirus. Debbie Elliott/NPR hide caption 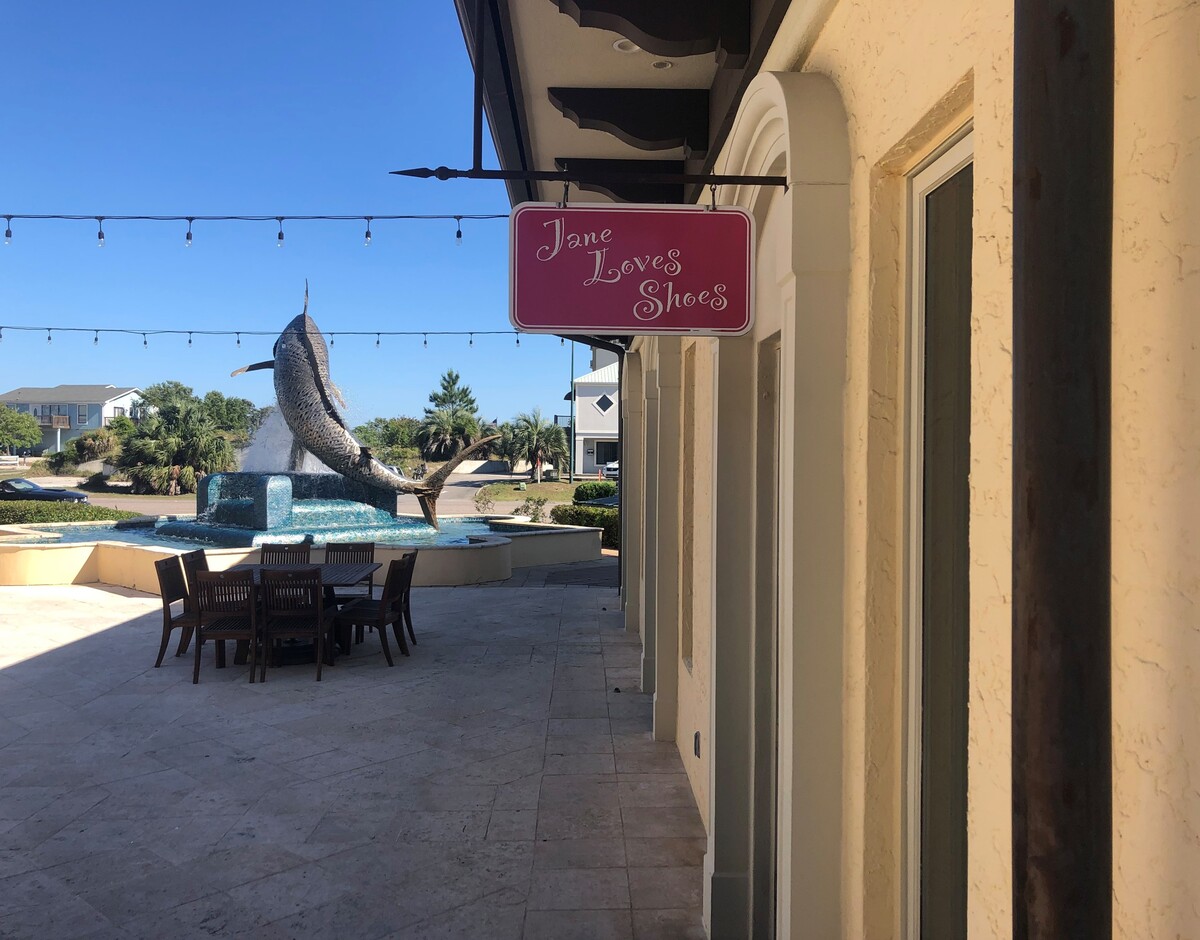 The women's boutique Jane Loves Shoes in Orange Beach, Ala., has been closed for more than a month because of the state's stay-at-home order closing most retail stores to slow the spread of coronavirus.

April, May and June are typically the busiest months for Jane Loves Shoes, which employs six people. The store lost half of its March business and all of April.

Hood says it's been frustrating that big box stores like Walmart and Target remained open, selling the same goods.

"I have mixed feelings about it," he says, adding that he has shopped at Target during the shutdown. "I needed those things, and I'm glad they weren't closed."

But he says it's unfair that people could buy a swimsuit or a pair of shoes there, but not his store. "People are still trying those clothes on and putting them back on the rack," he says.

His employees have spent the last month deep cleaning and reorganizing.

"Doing everything we can to make it safe," Sydney Allegri says.

Seating areas have been spread out, each stocked with disposable footies for trying on shoes. Hood says clerks will hand the shoes to customers but won't be touching any feet. Disinfectant wipes and hand sanitizers are available. At check-out everyone will be given their own sanitized pen to keep once they sign out. Workers will frequently wipe down door handles and other commonly touched spaces. And signs posted on the door explain social distancing and offer masks for customers. 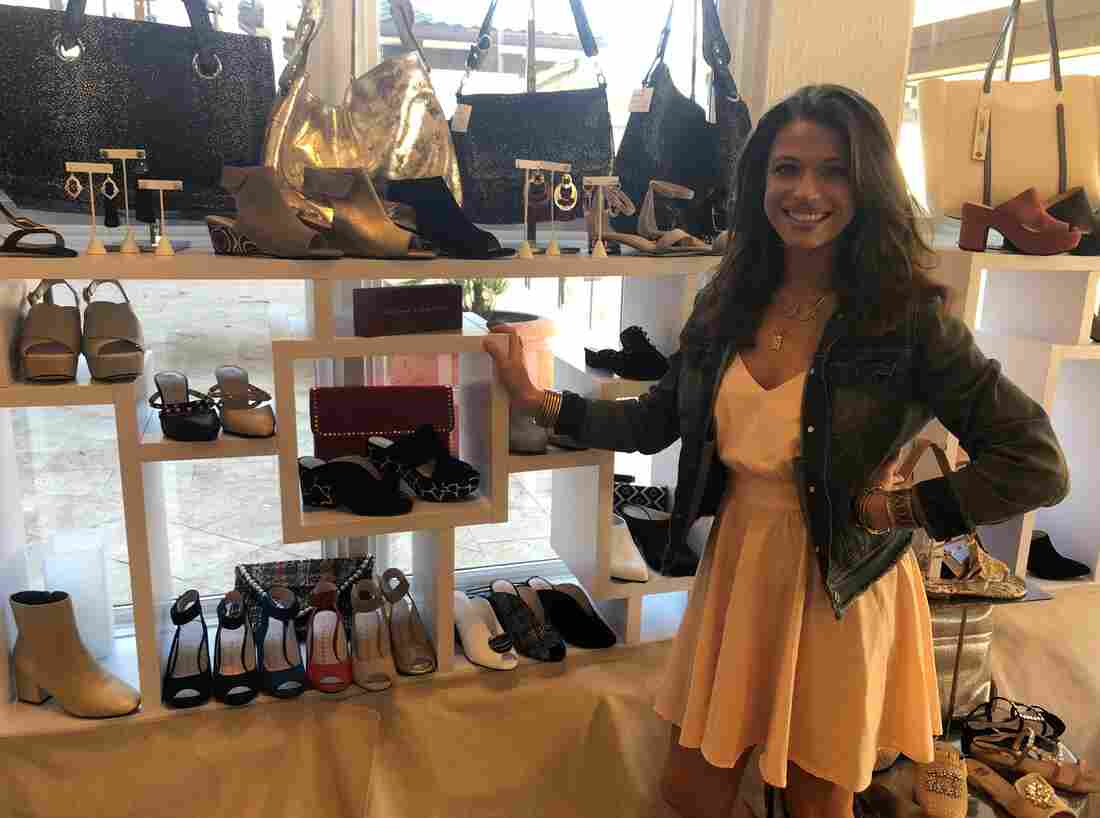 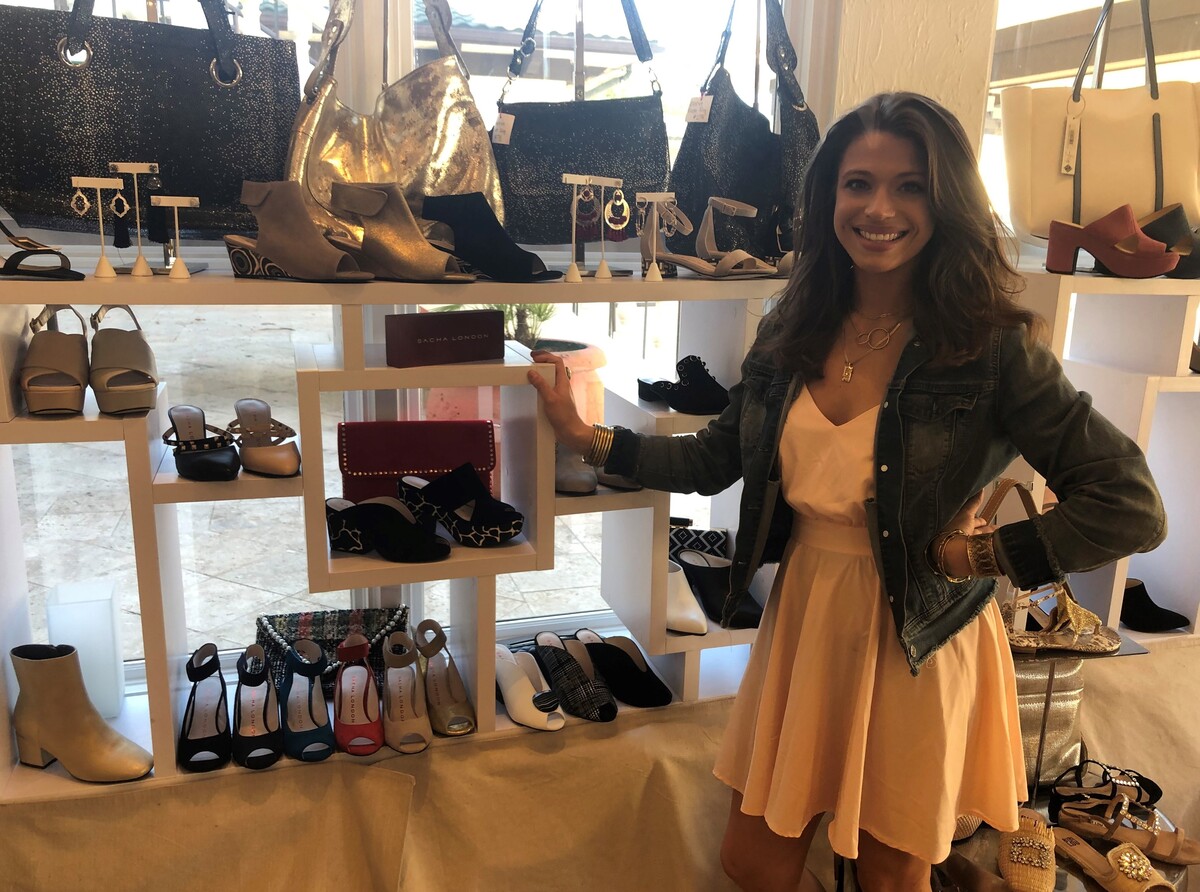 Hood says social distancing should not be a problem, even though the store is small.

Hood says they occasionally have groups of women on a trip that come in together. "But otherwise generally, we're one to three people at a time," he says.

Beyond the new safety protocols, the business is changing in a more fundamental way.

Jane Loves Shoes caters to a mature clientele – people who might be at higher risk for COVID-19.

Clerk Haleigh Yeates says there's some uncertainly about whether that group of shoppers will be ready to come back in just yet.

Yeates says she has become close with some of their regular customers.

"Almost family like," she says, describing how they sit together and talk. Now that can't happen anymore. Conversations will be from a 6-foot distance.

Customers seem to miss it too based on the voicemails that have piled up.

"Hey Jo" says one longtime client. "I'm just so anxious for you all to get back open."

Nonetheless, business this first day back is very slow. A lone customer is greeted enthusiastically by Sydney Allegri.

"It's our first day," she says. "You're our first customer!"

Nancy Sebastian is looking for some new shorts.

She's a local real estate agent, and happy to be able to shop again, and not at the drug store.

The Coronavirus Epidemic In Birmingham, Ala. Seen Through A Doctor With The Disease

"It feels really, really good," Sebastian says. "I know there's so many mixed emotions with everybody but we have to get back to work."

Sebastian says she trusts local merchants to operate in a safe manner.

"We are all going to do what we're supposed to do," she says. "And everybody's at the beach right now and I'm hoping they're doing what they're supposed to do so they don't close it down again."

Jo Hood calls it liberating to be back even under new norms.

"Small business commerce is a central part of our economy," Hood says. "It's good to know we were able to practice it again."

By Friday, traffic picked up at Jane Loves Shoes, but still well below a typical spring weekend in Orange Beach, Ala.