Accessibility links
Opinion: Why Is Support For Media Crackdowns Rising In Africa? Surveys show growing rates in many African countries approve of government efforts to curb media freedom. Disinformation and political patronage are part of the problem, writes Jeff Conroy-Krutz. 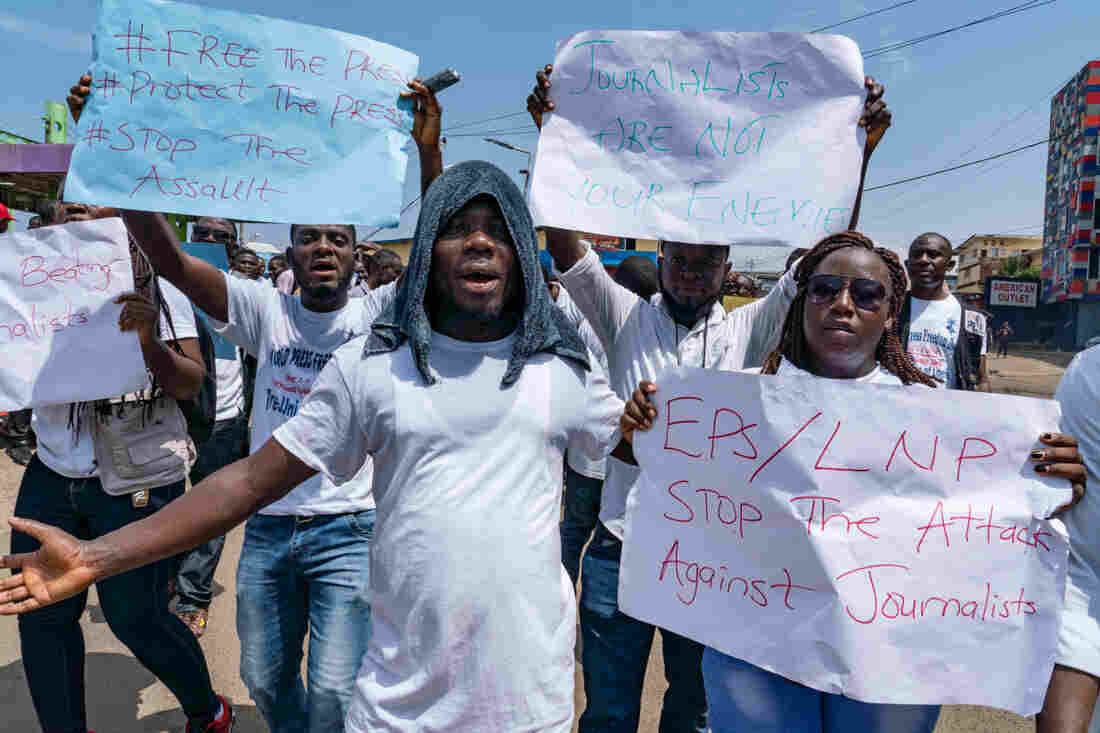 Journalists protest against what they say has been a pattern of using excessive force against them by the police and members of the government's security forces in Monrovia, Liberia, in March. Findings from a survey by Afrobarometer show that in Liberia, more than two-thirds of respondents backed government-imposed limits on the media. Carielle Doe/AFP via Getty Images hide caption 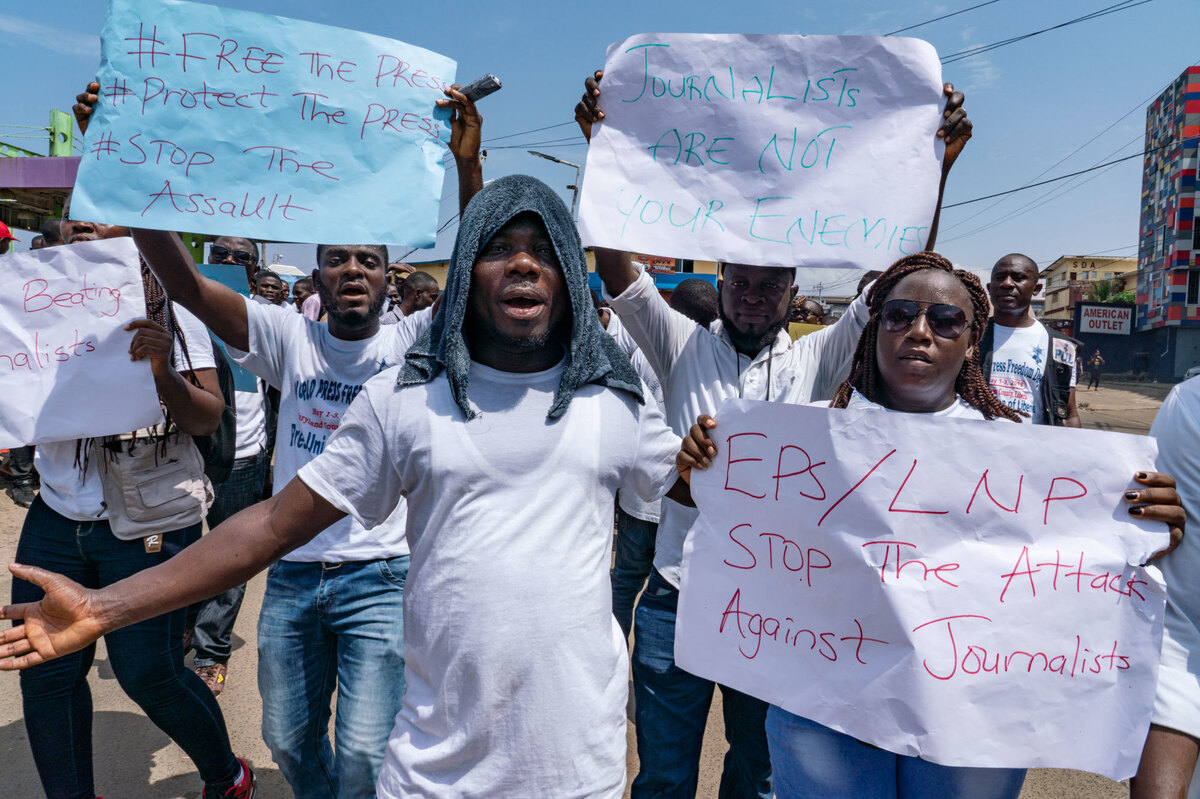 Journalists protest against what they say has been a pattern of using excessive force against them by the police and members of the government's security forces in Monrovia, Liberia, in March. Findings from a survey by Afrobarometer show that in Liberia, more than two-thirds of respondents backed government-imposed limits on the media.

Jeff Conroy-Krutz is associate professor of political science at Michigan State University. He studies African media, focusing on how media affect electoral competition, ethnic and partisan polarization, and political engagement. He has conducted research in Central, East and West Africa and is editor of the Afrobarometer Working Papers Series.

Leaders around the world are exploiting the fear and uncertainty created by the coronavirus pandemic to cement their power and suppress their opponents. In Africa, media freedom is particularly under threat, as governments use emergency decrees and disinformation laws to silence critics. Journalists in Nigeria, Somalia, Tanzania and Zimbabwe have been jailed or beaten for reporting on the virus. This is not anything new; African strongmen have long tried to curb media freedom. What is perhaps more concerning is the growing evidence that a majority in some African countries now supports their governments' attempts to suppress media freedom.

Findings from the latest surveys conducted between 2016 and 2018 by Afrobarometer, an independent African research network that tracks African citizens' attitudes on political, economic and social issues, suggest that support for media freedom is in sharp decline across the continent. The 2016-18 survey round is the first in which more Africans backed the concept of government restrictions than endorsed media freedoms.

It isn't a negligible change in people's attitudes. Across the same 31 countries that had been surveyed in 2011-13, support for media freedoms dropped 10 points, to 46%, while support for restrictions had grown 10 points, to 49%. Majorities in 18 of the 34 countries surveyed (Africa has 54 countries in total) said that they supported the right of government to limit media freedom. In three countries — Liberia, Mali and Senegal — more than two-thirds of respondents took this position. As recently as the 2011-13 survey round, majorities said this in only four of the African countries surveyed.

Several factors make these declines especially worrisome. For starters, some of the deepest have come in countries, including Tanzania and Uganda, that have enacted the gravest media restrictions. Even more alarming, in many countries support for media freedom, at least as measured here, is now the minority position. In 2011-13, majorities supported media freedom over government control in 24 of 31 African countries surveyed. By 2016-18, that number had shrunk to 15. In Senegal, Mali, Liberia and Gambia, more than two-thirds of respondents backed government-imposed limits on the press.

Why is Africans' support for media freedom declining? Are those who support their governments simply following their leaders' self-serving rhetoric? Or are Africans responding to perceived problems with media content, such as hyperpartisanship or disinformation?

In the most recent Afrobarometer survey, 43% of those who say that they trust their country's leader "just a little" or "not at all" still back government restrictions on media. The implication of this striking finding is clear: even many Africans who do not support their current governments still favor media curbs. This suggests that many Africans are withdrawing support for media freedom not because they are taking cues from the political class, but because they independently hold an unfavorable view of what the media produce. It is hard to fault citizens for this negative assessment of media content.

One problem is bias. In the thin advertising markets common in Africa, media enterprises often require paid government announcements and other forms of political patronage. Others are often owned outright by politicians and their allies. Many Africans have come to see journalists and media outlets as beholden to political figures and parties rather than a source of trusted information or a check on corruption. In their most extreme form, biased media and more fringe outlets can cross the line into hate speech and incitement to violence, which is particularly worrisome given the fragility of many of the region's political systems. The problem of disinformation also looms especially large in Africa. In Nigeria's 2019 elections, one WhatsApp rumor falsely claimed that President Muhammadu Buhari, who had sought medical care abroad during his first term, had died and was replaced by a Sudanese clone. Real problems with bias, hate speech and disinformation make it all the easier for governments to rationalize suppressing free speech.

What, then, is to be done? Social media companies need to do more to limit the spread of inflammatory, hateful and misleading content on their platforms. We know this is possible. WhatsApp has already made moves to limit the spread of disinformation around the COVID-19 pandemic. Second, foreign governments and international organizations, including major donors, must make media freedom a priority when dealing with African states. Governments that jail journalists, cut off the Internet and shutter media houses must be named and shamed.

African content producers must shoulder a measure of responsibility, too. Forward-thinking publishers and broadcasters are participating in efforts, such as the African Media Initiative, to promote professionalism and social responsibility in journalism. The status quo gives self-interested politicians too many opportunities to make sweeping attacks that are unfair to the thousands of journalists, broadcasters and bloggers who, despite slender resources and threats to their personal safety, bring fair, accurate and in-depth reporting to people throughout Africa.

A full version of this essay appears in the April issue of the Journal of Democracy.