Accessibility links
U.S. Automakers Are Slowly Rolling Toward A Restart U.S. auto plants are gradually starting to reopen. New safety measures, from social distancing to face shields, are being put into place, while some workers are anxious about the risk of an outbreak. 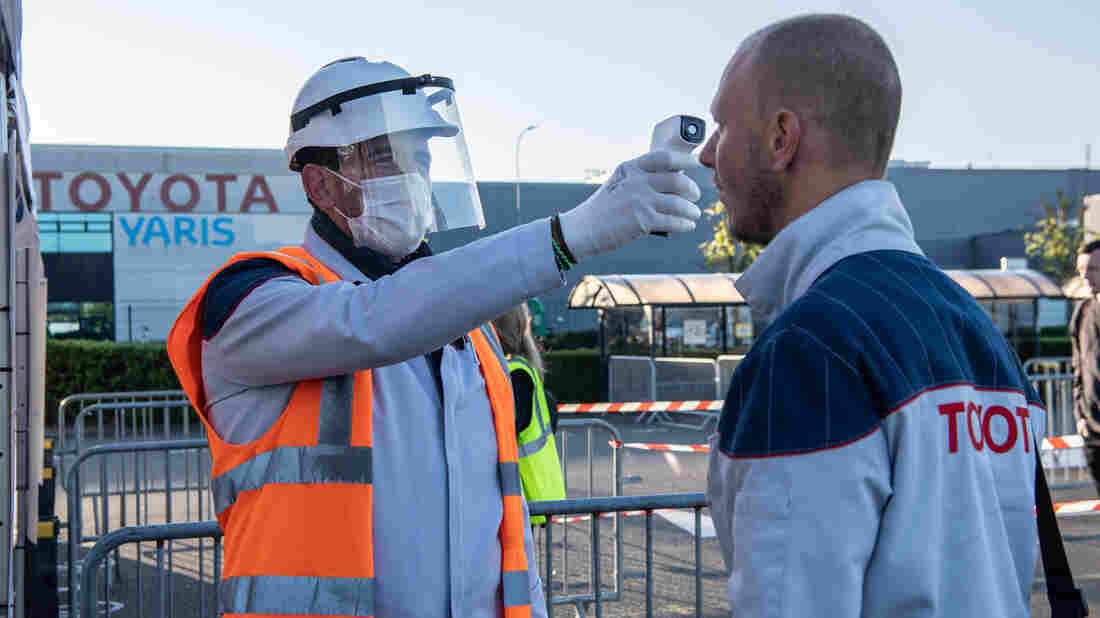 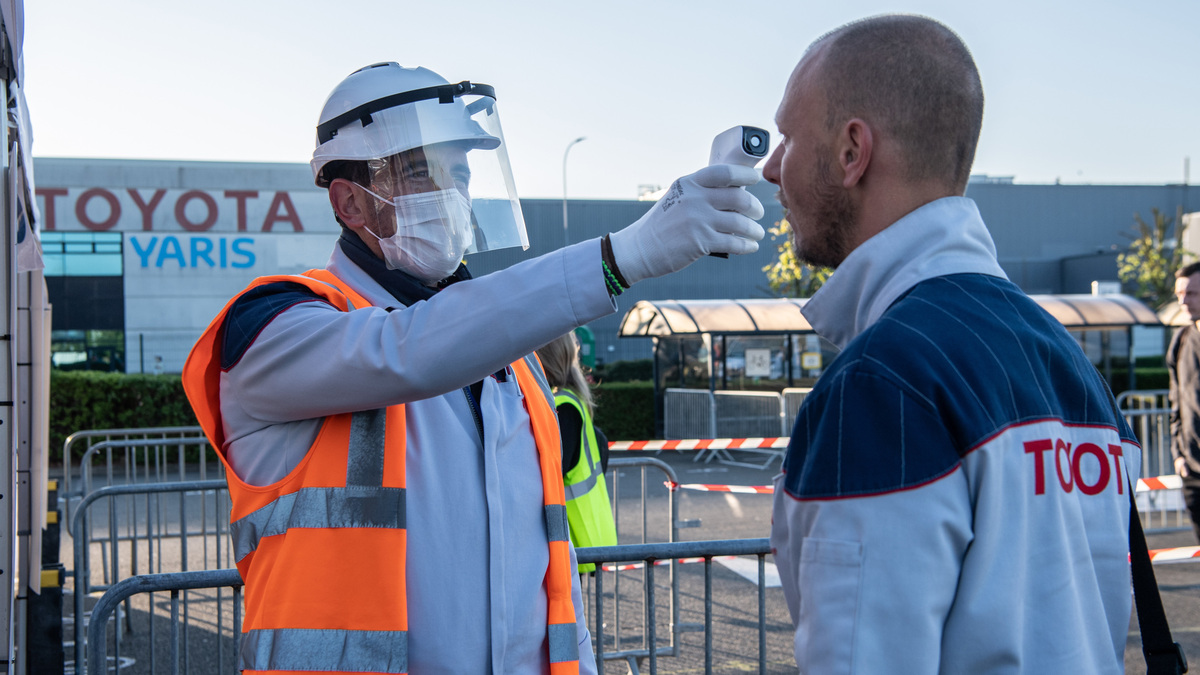 A worker wearing protective gear checks an automobile assembly line worker's temperature at the entrance to a Toyota plant in Onnaing, France, on April 21. U.S. auto plants are preparing to reopen with new coronavirus safety protocols.

Cars didn't change much between March and May. But the factories where they're assembled are shifting dramatically.

Auto plants are starting back up — much more slowly than they shut down — with new extensive health precautions meant to prevent the spread of the coronavirus: plastic sheeting and clear shields installed on assembly lines; mandatory temperature checks and symptom questionnaires; solitary chairs in break rooms; cycles of sanitizing, again and again; fabric face masks; and, in some cases, clear plastic face shields on workers.

It's all going to take some getting used to, says Todd Dunn, president of the United Auto Workers Local 862 in Louisville, Ky. He calls the new protocols a "paradigm change" and says workers are divided on whether they're eager to return to work or wary of the risks. Or both.

"I think a lot of a lot of Americans are ready to get our country back on target," he says. "But ... we've got to be able to put in some levels of precaution that we didn't have before."

"There's a lot of high anxiety," says Ralph Morris Jr., president of UAW Local 163 near Detroit. "I mean, you read about the meat processing plants. ... In a factory setting, unless precautionary measures are taken, it could spread through the whole facility."

Nonunionized Kia, Hyundai and BMW plants in the South, where states were allowing operations to resume, restarted their lines on Monday. Toyota is eyeing a May 11 restart. Fiat Chrysler announced Tuesday it plans to reopen the week of May 18, and Ford and General Motors are also looking at mid-May as a possibility.

One challenge is that the auto industry is deeply interconnected across North America. Suppliers in different states and countries — covered by different lockdown orders — must return at roughly the same time for supply chains to operate smoothly.

Mexico is under a stay-at-home order through May. And Michigan, the heart of the U.S. auto industry, has been particularly hard-hit by the virus and continues to block nonessential businesses from operating.

Some auto suppliers have chafed at Michigan's stay-at-home order. But the UAW, which represents employees at Ford, GM and Fiat Chrysler and a number of suppliers, welcomed the recent extension of the order and said that early May was too soon to restart operations. The union called for more COVID-19 tests. While temperature checks or symptom questionnaires are increasingly common safety procedures, they can't catch people who are asymptomatic but spreading the disease.

"I think the bottom line is, based on all the information we have access to, we will not have a reliable and scalable testing solution for several weeks — and it may even be months," Kiersten Robinson, the chief human resources officer for Ford, told reporters last week.

Robinson said widespread testing will be critical in the long term. But for the short term, Ford plans to send employees with symptoms to be tested at local hospitals or clinics, without offering testing to all employees.

There's pressure on car companies to figure this out quickly. Plant closures are costing the industry billions of dollars and affecting hundreds of thousands of workers. And while car sales have plummeted because of the pandemic, they've already started to recover, causing executives to worry about just how long they can remain closed before dealerships start to feel a pinch.

Sean Suggs, the president of a plant in Blue Springs, Miss., where Toyota builds Corollas, says dealers aren't yet running out of the sedan. But the uptick in sales is one reason Toyota is eyeing a May 11 restart date for his plant, he says.

He emphasized that the reopening will be gradual.

"We're not going to just flip a switch and everything's going to be back to normal," he says. "There is no going back to the normal way. We simply can't operate the way we operated before COVID-19."

"Day 1, we probably won't even produce a vehicle," he says. "We're gonna get our team members back and get them acclimated to the new way of life."

And with temperature checks and mandatory face masks, it might be a long time before that new way of life feels normal.