Accessibility links
Supreme Court Considers Anti-Prostitution Pledge In HIV/AIDS Funding Case At issue is whether the government can require private nonprofits to denounce prostitution in order to qualify for U.S. foreign aid grants aimed at fighting the worldwide AIDS epidemic. 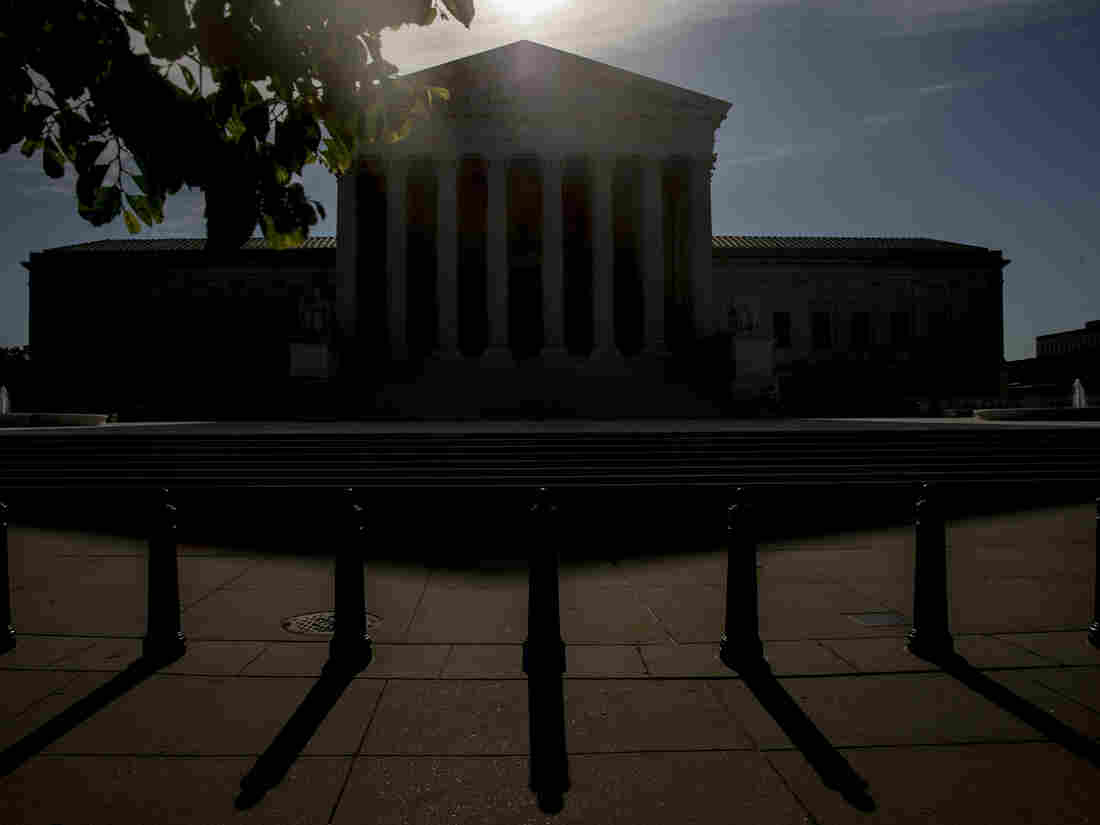 The Supreme Court's second day of arguments by phone was devoted to a new version of a case it decided seven years ago involving federal money to fight AIDS around the world. Andrew Harnik/AP hide caption 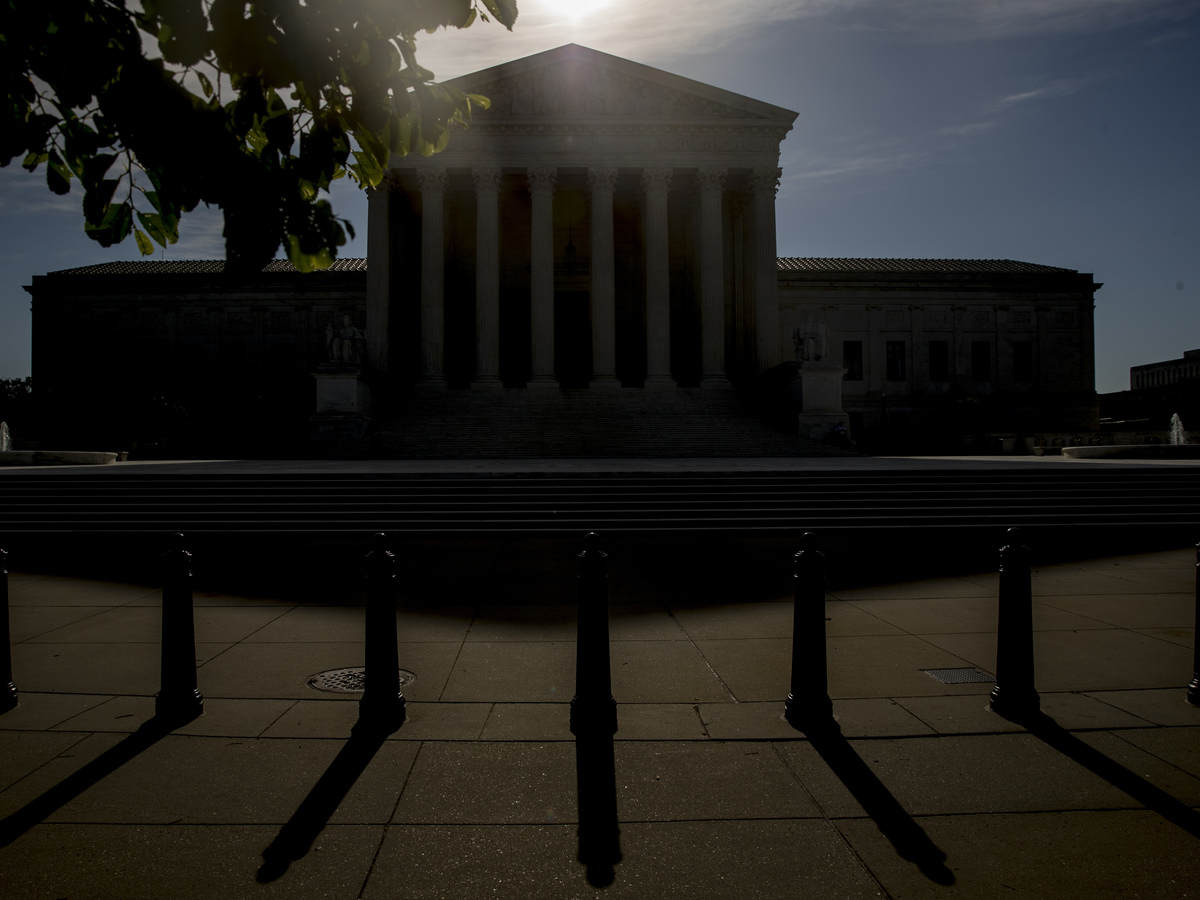 The Supreme Court's second day of arguments by phone was devoted to a new version of a case it decided seven years ago involving federal money to fight AIDS around the world.

The Supreme Court kicked off a second day of telephone arguments Tuesday with a case that mingles sex, the HIV/AIDS epidemic and free speech.

At issue is whether the government can require private nonprofits to denounce prostitution in order to qualify for U.S foreign aid grants aimed at fighting the worldwide AIDS epidemic. This is the second time the court has faced this issue, but this time it comes with a twist.

Listen: Oral Arguments In This Case

In 2003, Congress, at the urging of President George W. Bush, enacted a major foreign aid program to fight the HIV/AIDS pandemic and prevent new infections worldwide. In appropriating the money, Congress included a provision requiring any private organization that received funding through the program to adopt an explicit policy denouncing prostitution and sex trafficking.

In 2013, the Supreme Court struck down that provision, declaring it unconstitutional because it compelled U.S. nonprofits to adopt an explicit policy as a condition for receiving grant money. By a 6-2 vote, the high court said such a requirement interfered with the free speech rights of private U.S. organizations engaged in the fight against AIDS.

The case was back Tuesday, but this time, the question was whether foreign organizations closely affiliated with those same U.S. nonprofits can be required to adopt the policy denouncing prostitution.

Defending the provision was Assistant to the Solicitor General Christopher Michel. He argued that foreign affiliates of U.S. organizations like Save The Children, CARE and WorldVision are separate legal entities from their parent U.S. organizations, and that as foreign entities, they have no rights under the U.S. Constitution.

"Is it reasonable to insist on formal corporate ties in this context?" he asked. "It's undisputed that to be effective in many of the foreign countries involved here, you have to operate through a foreign entity."

Michel responded that if the U.S. nonprofits "make the choice to operate through a foreign entity because they decide that is more convenient or more effective, they have to accept the bitter with the sweet."

Roberts still seemed doubtful, noting that the U.S. nonprofits and their foreign affiliates "have the same name, the same logo, the same brand. And I wonder if it makes more sense to think of the foreign entity as simply another channel for the domestic entity's speech."

Representing the nonprofits was lawyer David Bowker. He maintained that for all practical purposes, there is no difference between the U.S. nonprofits and their foreign affiliates, so making the affiliate adopt an anti-prostitution message effectively puts words in the mouth of the U.S. nonprofit.

Questioned by Justice Clarence Thomas, Bowker said that the harm suffered by the U.S. nongovernmental organizations is that their foreign affiliates must either lose their funding by refusing to comply with the anti-prostitution policy or undermine their mission by denouncing the very people they need to work with — namely prostitutes. And if the foreign affiliates make the pledge needed to get funding, he said, the U.S. parent organizations have to disavow their own affiliates' anti-prostitution pledge, thus harming the entire anti-AIDS fight.

"It's a Catch-22 for these U.S. organizations," said Bowker.

Justice Stephen Breyer followed up: "So why don't you simply write a grant to get all the money yourself and then you give it to CARE India? Why doesn't that work?"

Because, replied Bowker, under the statute, CARE USA, in subcontracting a grant to CARE India, would be required to impose the anti-prostitution pledge on its own affiliate on behalf of the government.

Justice Samuel Alito, who signed on to the court's 2013 decision, said he had more concerns in this case — mainly "that it will force Congress to either withhold foreign aid entirely or allow foreign aid to be used in ways that are contrary to the interests of the people of this country."

Justice Brett Kavanaugh followed up: "Suppose the U.S. government wants to fund foreign NGOs that support peace in the Middle East but only if the NGOs explicitly recognize Israel as a legitimate state. Are you saying the U.S. can't impose that kind of speech restriction on foreign NGOs that are affiliated with U.S. organizations?"

Bowker said that kind of a restriction would likely be acceptable because the aid in that case would be tied to the U.S. relationship with Israel.

Kavanaugh moved on to another question, noting, "The government says your position would unleash foreign affiliates of U.S. corporations to pump money" into U.S. election campaigns, something that is explicitly barred under current law.

Bowker replied that U.S. campaign laws, as ruled on by the Supreme Court in prior cases, allow the ban on foreign contributions because they do not come from U.S. entities at all.

A decision in the case is expected some time this summer. While the court usually concludes its work by the end of June, it is expected that this term will extend into July because the arguments in this and nine other cases were postponed for more than a month because of the coronavirus.